Many Premier League managers have adopted a 3-4-3 system since Antonio Conte made it fashionable again on his way to winning the title with Chelsea. They all put their own spin on it with how they use certain individuals within the formation and Stoke City’s Mark Hughes is the latest to try his hand at it.

Stoke currently sit in 11th position on five points. They lost their opening game of the season, away to Everton, but have since taken four points off Arsenal and Manchester United at the bet365 stadium.

In any normal season it’s an impressive feat, but to do so after a squad overhaul in the summer makes it even more of an achievement. The team that started against José Mourinho’s men was made up of five new signings, playing in a new shape.

Players who put in questionable performances during the 2016/17 campaign, when Hughes’ men finished in a disappointing 13th position, look a lot more comfortable in this new set up. The former Wales manager is renowned as a master tactician but he’s proving himself to be a dab hand when it comes to man management.

Eric Choupo-Moting, the two-goal hero against United, was inconsistent during his days at Schalke but looks hungry in a Stoke shirt.

Jesé arrived from Paris Saint-Germain on loan and already looks like a shrewd signing. He netted the winner against Arsenal and was a handful for a United side who hadn’t conceded a goal in the league until their trip to Stoke.

Darren Fletcher joined in the summer from West Bromwich Albion. The move for the 33-year-old caused many to raise an eyebrow but he’s more than doing a job alongside Joe Allen.

It's not just new signings that Hughes is having a positive impact on either. In perhaps one of the strangest positional changes ever, the manager has turned Mame Biram Diouf into an effective right wing-back, grabbing an assist against his former side on Saturday.

It's even more extreme than when Conte decided to use Victor Moses as a wing-back and Arsené Wenger plumped to use Nacho Monreal as one of his three centre-backs.

However, the player most benefitting from this change in system is Xherdan Shaqiri.

The former Bayern Munich winger hasn't lived up to expectations since his £12million move to Stoke in the summer of 2015. Once tipped to be the next big thing, he's now 25 years old and should be coming into the prime of his career.

Capable of the sublime, he's never really lived up to the hype. But he seems to be flourishing in his new role in Hughes' system and impressed in the draw with the Red Devils.

Choupo-Moting, rightly, grabbed the headlines, but the Swiss international gave everybody a glimpse of what might be if he's able to add consistency to his game.

He's being used on the right side of the front three but, unlike other players in that role, he's not just tucking inside to operate in attacking areas. He's dropping deep, so much so he's picking the ball up off the centre-backs and the two centre-midfielders are actually ahead of him.

Hughes is allowing Shaqiri freedom to influence the game. 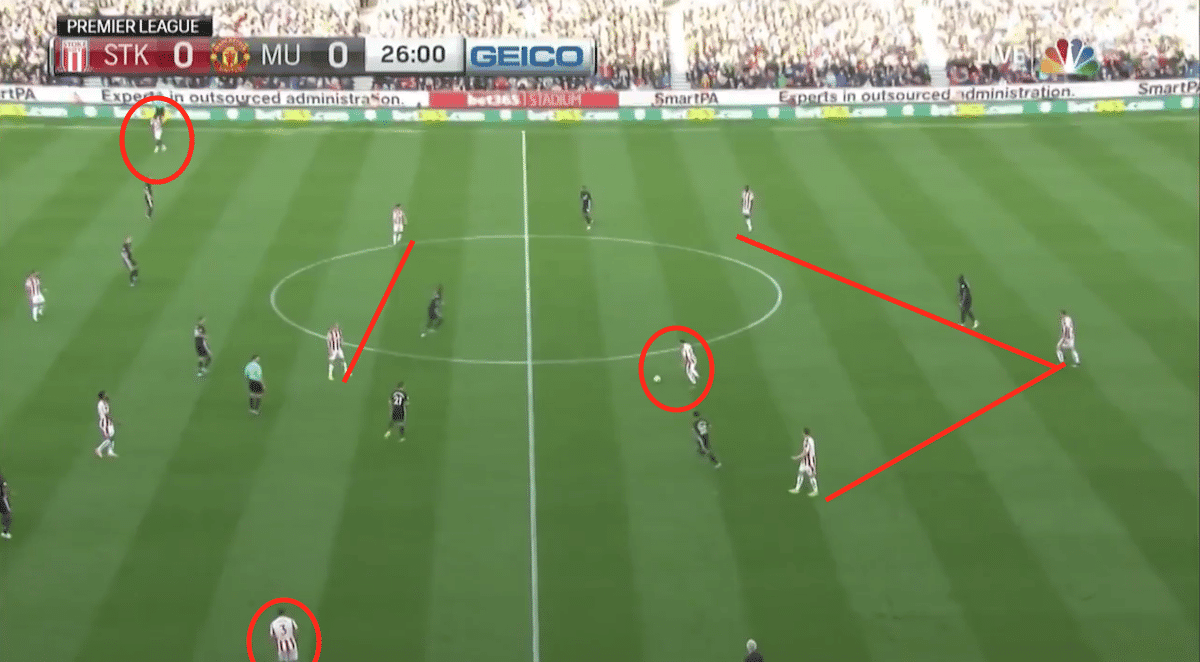 In the still above you see just that. Shaqiri is just ahead of the back three as he takes over possession. He's vacated his position on the right side of the attack but Diouf has pushed on to fill the space. United are slow to press and he's able to play a pass to Allen which gets Stoke in behind the away side's midfield and running at the defence.

Shaqiri was orchestrating play. And his touch map, below, courtesy of Whoscored.com, shows this. 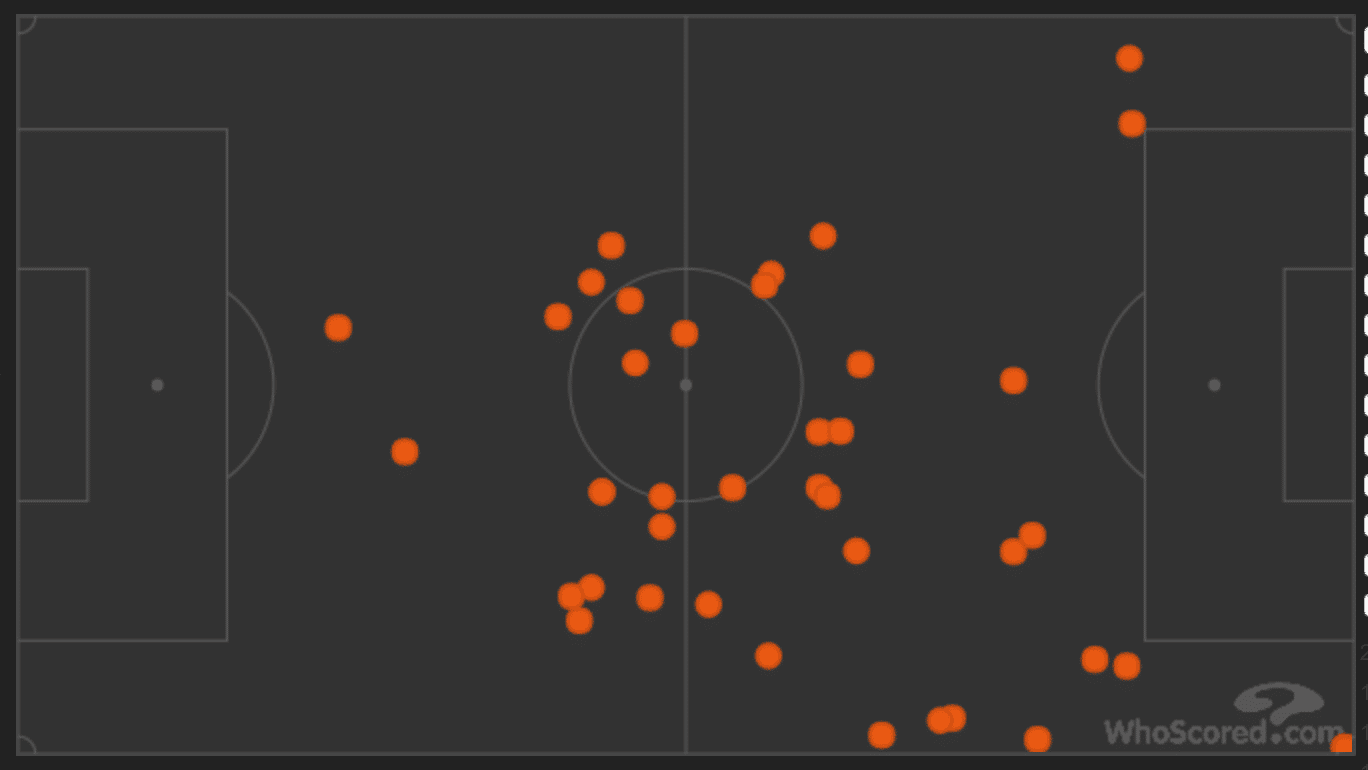 He had plenty of touches in central areas. In a way, when Stoke are in possession they're operating in a 3-3-4 formation, with Choupo-Moting and Jesé leading the line and Erik Peters and Diouf acting as wingers.

Having Shaqiri in these zones will only benefit Stoke and give them more of an edge going forward. With his striking ability from distance, having Shaqiri come onto play like he did against United will result in goals. 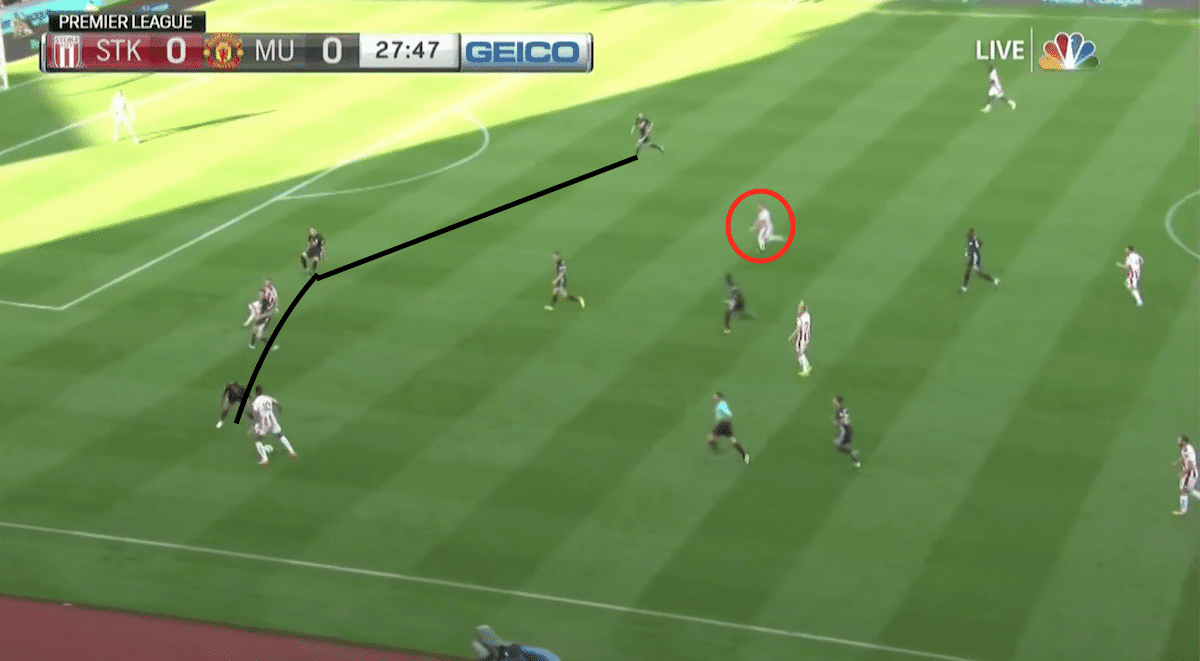 You see it in the above graphic. Because Choupo-Moting and Jesé almost operate as a two, it gives the opposition's defence more to do and drags them into areas they don't want to be in.

The German-born Cameroon international is in possession in the above picture after Fletcher wins an aerial duel against Eric Bailly. Nemanja Matić is forced to fill in at centre-back and Ander Herrera looks to cover the position just ahead of the back four while Bailly retreats.

Shaqiri, circled in red, heads towards the glaring gap between Phil Jones and Matteo Darmian. He runs off of Paul Pogba and goes unnoticed after starting in a deeper role.

He receives the ball and opts to shoot, even though Diouf is the man over. It's blocked but if Stoke continue to work these openings he's going to punish a number of teams.

Had he been wide and drifted in field he likely would have been tracked. 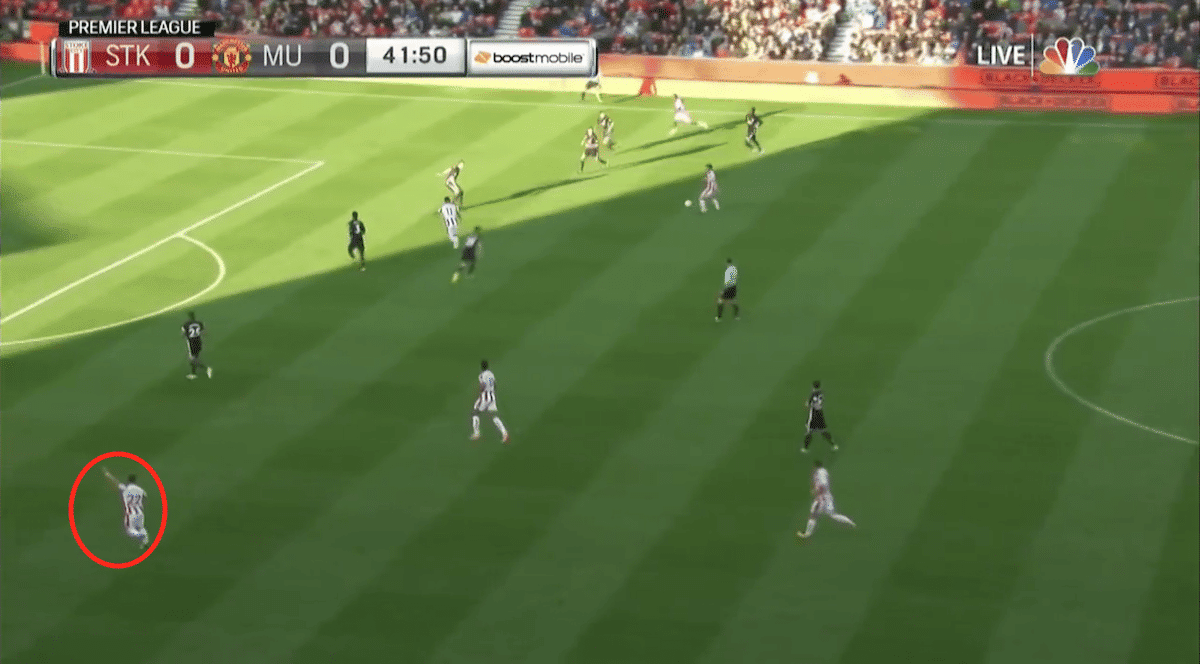 Shaqiri's given so much freedom he even takes up wide-left positions. This then causes the opposition to reposition themselves to cover, and they aren't always able to. The still above is taken in the build up to the opener. 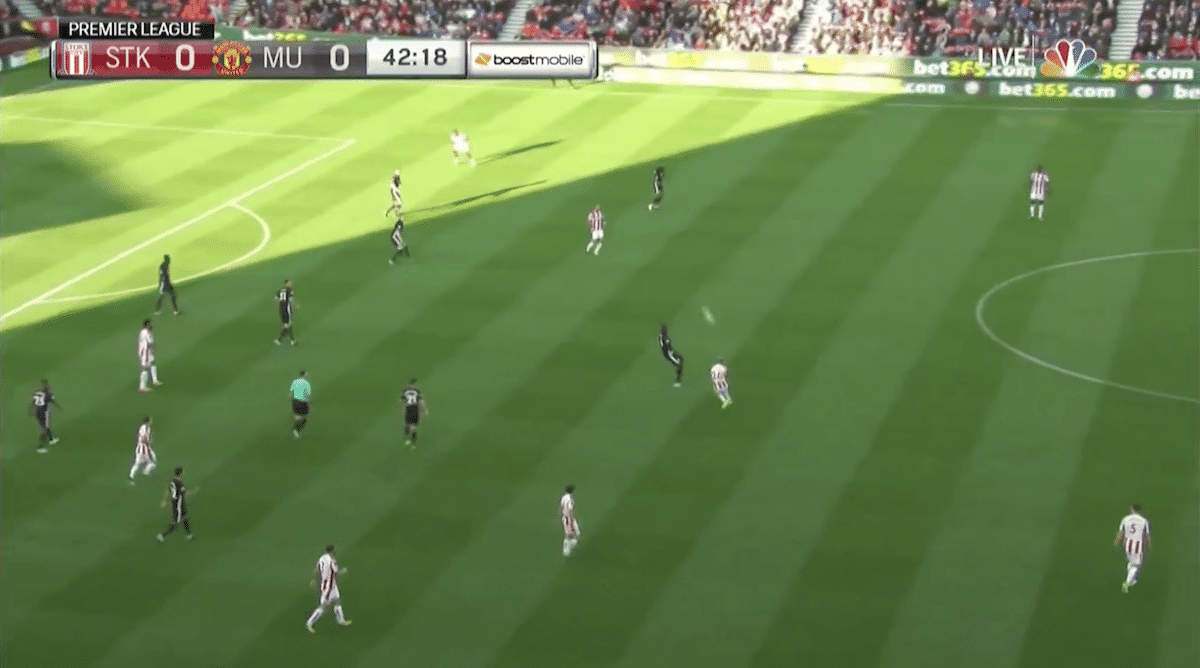 Stoke work the ball right to left and back again. With Shaqiri taking up a wide left role it allows Choupo Moting to stay in a central area, and when the ball comes back into the penalty area, he's in a position to get a run on Bailly and fire past David De Gea.

While he wasn't directly involved in the goal – no assist or “hockey assist” – the fact he was given the freedom to roam resulted in players being in the positions they were in to put Stoke ahead.

This could well be his coming of age season. If Hughes persists with what looks to be a well balanced 3-4-3, the Welch coach may simultaneously unleash Shaqiri onto an unsuspecting Premier League.