We're 10 games into the Championship season and a win for Stoke would put them one point behind West Brom at the top of the table. Can they close the gap? Find out with our Stoke vs West Brom match preview with free tips, predictions and odds mentioned along the way.

The season might be 10 games old but West Brom remain unbeaten. A week ago there was talk of them going off the boil with a series of draws but a dramatic turnaround against a strong QPR side and the demolition of Cardiff on Tuesday has them back on track; if they were ever off it. For Stoke, their form has been decent too with there draw at Preston seeing them stretch to three unbeaten. If both teams are at it though, West Brom win this game. At the moment, West Brom are indeed ‘at it'.

Both teams will contribute to decent match

Although we fancy the Baggies to win this match we also believe both will score in what is likely to be an intriguing contest between two promotion hopefuls. Stoke have played 13 games across all competitions this season and have failed to find the net just twice. They've scored in their last six. As for West Brom they've scored 20 goals this season and are fresh off the back of hitting four in midweek. With multiple goal scorers in their team keeping them out will be hard work.

Stoke won't score more than one

Our final prediction looks at how many goals Stoke might score. We've already tipped them to hit the net but we think the prospect of them grabbing two goals is unlikely hence our under 1.5 selection. They're averaging 1.4 goals scored per game in the league and face a West Brom side that have only conceded eight goals all season. You would need to go back to 2017 for the last time they bagged two or more goals against the Baggies too so they don't exactly have form for free scoring over West Brom.

The best odds for Stoke vs West Brom

To say alarm bells rang at Stoke would be an overstatement but back to back games that saw one point from six against Barnsley and Derby hardly filled the terraces with expectations. Things are back on track now though. They can thank Nick Powell. He's scored in his last three games in all competitions. West Brom have looked steady all season; you know you're on to a good thing when draws are being scrutinised. In Karlan Grant and Callum Robinson they have two players who would walk into pretty much any team in the league too; Stoke's defence better watch out.

FAQ for Stoke vs West Brom 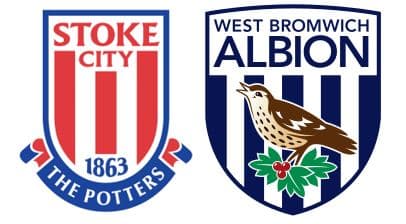