These two teams couldn't have started the season much differently had they tried but that doesn't mean this result is a given. Can Nottingham Forest spring a surprise? Find out with our Stoke vs Nottingham Forest match preview with free tips, predictions and odds mentioned along the way.

Stoke turned in a cracking performance last time out to beat Swansea and it was far from a one off; they're unbeaten in five and have lost just one in 10. By contrast, Nottingham Forest have won just one of their past five games losing two on the spin heading into this match. Stoke also hold the upper hand on the head to head front; Nottingham Forest have won just one of the last five meetings with Stoke winning two and the other two ending level.

If you're on the fence over whether this game will go over or under 2.5 then we suggest the odds change your mind. 23/20 is serious value. Stoke have exceeded 2.5 goals in three of their last five matches with a game average of 2.8 goals. Nottingham Forest have gone over 2.5 in each of their last five with a total of 16 goals scored; that's an average of 3.2. With the last five head to head games also serving up a game average of 3.2 everything points to a minimum of three goals.

Our final prediction is in the goal scorer market; we're backing Nick Powell to score at anytime. The 27-year-old has bagged two goals in three appearances this season but, more than that, he's only completed the full 90 minutes once. Not only does it make his strike rate to one goal every 106 minutes but it means he might just have a tad more freshness in his legs too; it could give him the edge against a less than robust defence.

Stoke have made a terrific start to the season sitting on seven points from three games and they've done so by playing some good stuff and scoring a fair few goals. A lot of praise is heaped on the likes of Nick Powell and Sam Surridge but defensively Leo Ostigard and Harry Souttar have been fantastic too. Nottingham Forest haven't made the start they would have wanted. Not only have they been getting beat but they've been easy to play against; they really could do with Scott McKenna stepping up to organise things at the back.

FAQ for Stoke vs Nottingham Forest 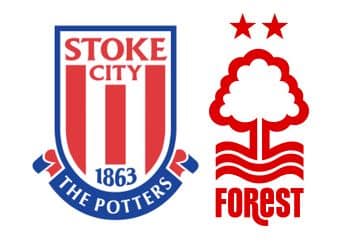