Stoke vs Millwall: Check out our betting tips

Millwall remain firmly in the hunt for the playoffs. Will they bag another win here to keep the momentum up? Find out with our Stoke vs Millwall match preview with free tips, predictions and odds mentioned along the way.

Millwall looked like they were heading for a midtable finish not too long ago, which is where Stoke are going to end up, but the Lions have roared into the playoff mix with an eight game unbeaten run that's seen them win six games. Stoke meanwhile have been on their own streak lately but, unfortunately for them, it's a winless one. The Potters haven't won in nine games having lost five and drawn four. On top of that, three of the last five head to head games have ended in a Millwall win with Stoke's last win coming back in 2018 – the two sides have played six times since then.

It will be low scoring

Millwall have been in a great vein of form lately and key to that has been their ability to keep things tight, which is why this game is destined to fall short of 2.5 total goals. Each of Millwall's last five have finished under the 2.5 cut off. Stoke's form is a little more high scoring with three of their last five going over 2.5, however, owing to the fact they're winless in that period, the goals element of this match is likely to be dictated by the Lions. That's why we fancy it to end south of 2.5.

Here are the key stats & form guide for Stoke vs Millwall

Stoke and Millwall are both solid Championship teams and had you been asked to back one to make a late playoff tilt in August you would probably have leant towards the Potters. Now though, it's all about Millwall with the Lions just two points off the top six.

Stoke's form across the last five games has them sitting second from bottom. The side might be safe from any relegation threat this season but they'll want to correct their results before the summer to avoid negativity creeping into their pre-season.

Millwall have been flying lately and although they're 10th in the league they are second in the form table and, as such, they are perhaps the most fancied side to sneak into the top six come the season end. If they can make it in, the momentum they'll have will be huge for the playoffs. 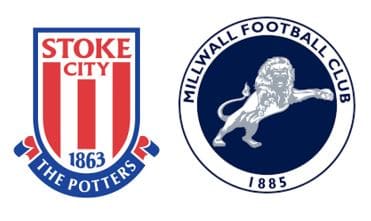