Stoke and Huddersfield both find themselves in the playoff spots at this early stage of the season with the same number of points. Who will win this game?

Find out with our Stoke vs Huddersfield match preview with free tips, predictions and odds mentioned along the way.

Stoke vs Huddersfield: Check out our top tips

Stoke have played four matches at home so far this season in all competitions; they've won every single one of them. Huddersfield meanwhile have played three games away from home winning just one; the other two games ended in draws at the 90 minute mark. Both have lost one of their five games; strangely it was Fulham that dished out the punishment. For Stoke, that was last time out. They'll be desperate to bounce back with a win and that extra incentive will see them through.

Our next prediction is for the game to go over the 2.5 goals mark. Based on the form of both sides to date, it should be a bet that's got a serious chance of coming in too. Stoke's league matches have served up a total of 13 goals or 2.6 per game. For Huddersfield, their game average sits at 3.2 – that's 16 goals across a the five games played so far. With respect of the matches themselves, both teams have seen three of their five go over 2.5 goals. Then you have the head to head record too. The last five have offered up 19 goals; that's 3.8 per game.

Last but not least in our Stoke vs Huddersfield predictions is for both teams to score. Both teams have played seven games in all competitions so far this season and their goal scoring prowess isn't something you can doubt. Stoke have scored in all but two of their games. Huddersfield have netted in the last six on the spin and only blanked in their first game of the campaign. With two teams that both know where the net is going up against each other clean sheets won't be the order of the day.

The best odds and lots more for Stoke vs Huddersfield

Common questions about Stoke vs Huddersfield 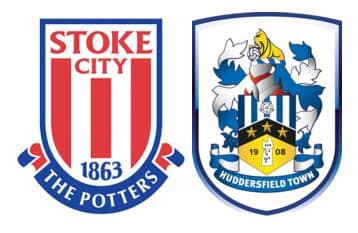