Stoke City recorded an unexpected yet well deserved victory over Arsenal at the bet365 Stadium thanks to a debut goal from new signing Jesé Rodríguez, who joined from Paris Saint-Germain earlier in the week.

The home side outworked their visitors and took advantage of the Gunners' makeshift backline to snatch a morale-boosting victory and a crucial three points.

The loss is an early-season blow to Arsenal‘s plans to get back into the Premier League top four, leaving manager Arsène Wenger with plenty of questions to answer.

Here are our player ratings for the game.

How Could Stoke City Line Up In 2017/18? | FWTV by FootballWhispers

The England international produced a handful of fine saves to further boost his hopes of usurping Joe Hart as the Three Lions' No.1. Butland commanded his area well and was brave and forthright when coming off his line.

The on-loan Chelsea defender is physically gifted but remains a little unrefined positionally, something Arsenal looked to exploit while he still looks to gain full match sharpness but the Frenchman coped admirably.

Always dominant in the air, Shawcross was less effective when the ball was on the ground. However, he did well to cope with Arsenal's movement in attack. Could've scored with a header in the first half.

Cameron was given a difficult time by Danny Welbeck and Alexandre Lacazette, whose movement and combination play was a constant thorn in the American's side in the first half, but he held out admirably.

Converted from a striker to a wing-back, the ex-Manchester United player offers pace on the flanks but is still adapting to his new role; he has plenty left to learn when it comes to the defensive phase of the game. Fortunate not to concede a penalty.

Nicknamed “The Welsh Xavi”, Allen is the pass master of the Stoke midfield but he was always likely to see less of the ball than his visiting counterparts here. The former Liverpool man was unable to get a foothold on the game but worked hard throughout.

The experienced head of the Stoke line-up, wily veteran Fletcher used the ball intelligently when he had it and endeavoured to keep up with play when undertaking his defensive duties.

The Dutch defender is never afraid of a physical battle and did well to keep Alex Oxlade-Chambelain relatively quiet for large portions of the game. He was less effective in attack, however.

Taken off halfway through the first half with an apparent hamstring complaint; replaced by Saido Berahino. 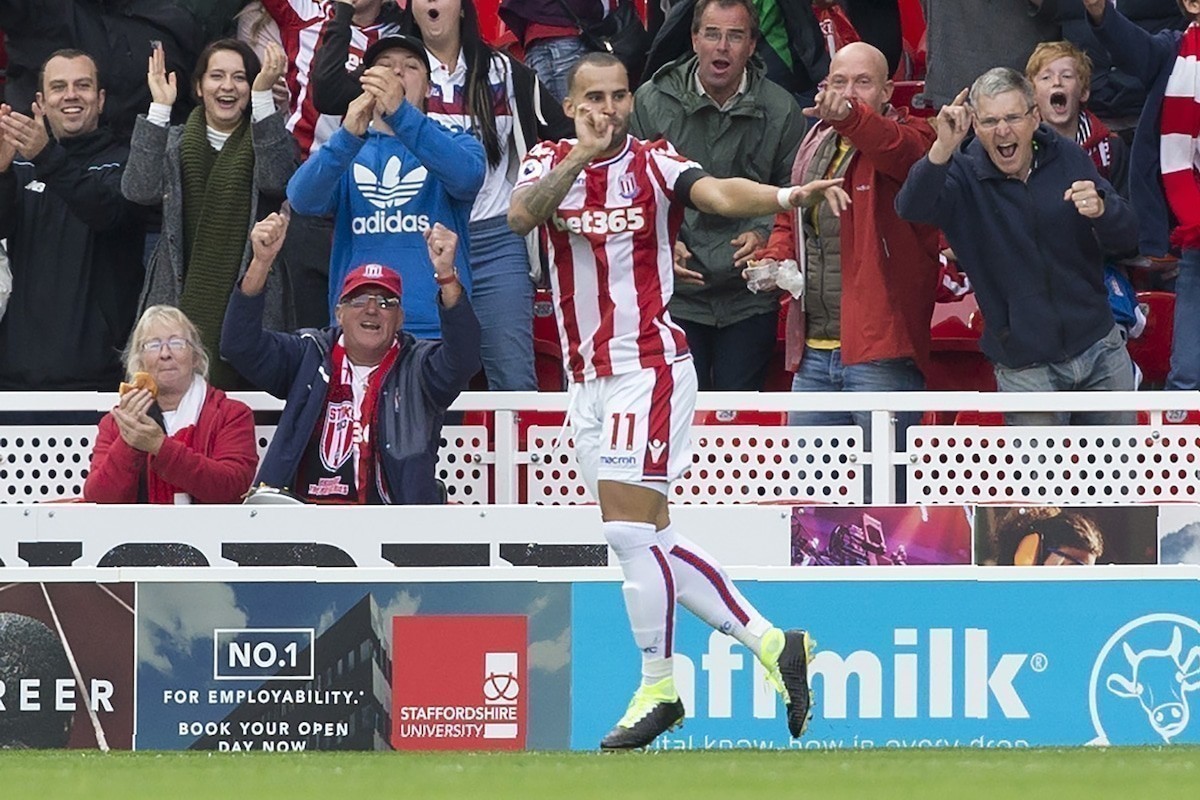 Desperate to please on his Premier League debut, Jesé showed a willingness to press and work hard off the ball and plenty of pace and movement on it. The former Real Madrid man was Stoke's most effective attacker by some distance and took his goal brilliantly.

At 6ft 3ins, the former Schalke forward, making his full debut for the Potters against Arsenal, was a physical presence in the opposition's penalty area but had to feed off scripts when it came to attacking play and tamely struck his best chance.

Berahino was an early replacement for injured Shaqiri and offered a pacey outlet  in attack for the Potters. Ramadan Sobhi Ahmed came on for the final 20 minutes and Bruno Martins Indi was another late addition, assisting Stoke as it was all hands to he deck to cling onto the three points.

Not overly tested, Čech was tidy in his distribution and made a couple of solid saves, but was well beaten by Jesé's clinical finish 90 seconds into the second half.

Returning to the starting XI, the former Sampdoria and Valencia defender brings presence and experience; he was a calming influence at the back for Arsenal here.

The Spanish defender, a full-back by trade, continues to look uneasy in the centre of defence and was largely culpable for Jesé's goal. The sooner Laurent Koscielny returns from suspension the better for the Gunners.

The powerful Bosnian defender is quickly becoming a fan favourite at the Emirates but this performance against Stoke will have done little added to that, as he was not as strong in the tackle as in previous weeks and less willing to take the risk of driving forward. Replaced By Olivier Giroud after 65 minutes as Arsenal chased the game.

Started in the unfamiliar role of left wing-back, but he moved inside intelligently and linked well with Lacazette and Welbeck in the inside-left position. Strong interplay in attacking zones but occasionally caught out defensively.

The Swiss international was a controlled presence in midfield in the first half, spraying passes around the pitch over all distances with his cultured left foot, but lacked creativity when the Gunners were chasing an equaliser.

Returning to the side in place of Mohamed Elneny after coming off the bench to inspire a comeback victory against Leicester City last weekend, Ramsey was typically tidy in possession and diligent in his pressing duties off the ball but, as with his central midfield pattern, offered little creativity.

The versatile England international provides pace and directness in attack while his defensive understanding continues to improve; he was not, however, involved enough in the final third.

A fairly subdued performance from the German creator but he always uses the ball intelligently and is able to unlock the most stubborn of defences in an instant, but he didn't do enough when his team needed the inspiration he is capable of.

Hard-working, industrious and dangerous in the final third, Welbeck put in a typical display against the potters. The former Manchester United man just lacks that little bit of creative flair that Alexis Sánchez offers.

Always a threat with his intelligent movement and pace in behind, Lacazette kept the Stoke backline on their toes. Linked play well and looked to get on the ball as much as possible despite a lack of service.

Giroud provided a target for Arsenal's direct play but failed to threat the home side, while late substitutes Alex Iwobi and Theo Walcott offered pace but had little impact.