Recent form and pyramid positions suggest this game will only go one way. Football is never that easy though so will it unfold as those figures suggest? Find out with our Stenhousemuir vs St Mirren match preview with free tips, predictions and odds mentioned along the way.

Hearts to breeze to a win

Just because there are a couple of leagues between the teams that doesn't always mean the result is nailed on; we're pretty sure it does this time though. Hearts are unbeaten in seven and have won their last four. By stark contrast, Stirling Albion have managed just one win from their prior five games. Better form plus better players will only see one result; that's a comprehensive Hearts win.

A big win and clean sheet

So, our first prediction backs Hearts to win. We can go further than that though as we fully expect Hearts to see off Stirling Albion without so much as a goal conceded. Admittedly, Stirling Albion have only failed to score a couple of times from their last 10 matches but most of those games was in League Two. Somehow, when they face a Hearts side that haven't conceded in seven matches we're not sure they'll carry the same threat.

A hatful of goals

Our final prediction is for over 2.5 goals to be scored in the game. Stirling Albion have seen 20 goals across their last five giving them a game average of 4.0 per match with all of those games ending above the 2.5 cut off. For Hearts, the stats aren't quite as strong with an average of 2.4 goals per match but, even so, three of their prior five ended in excess of 2.5. The last match between the two sides also saw three goals so there is plenty to back this tip up.

Check out the key stats for Stirling Albion vs Hearts

Stirling Albion have only managed to win a solitary game from their last five inside 90 minutes of action with their inability to keep the ball out of their net somewhat of a problem. With a red hot Hearts team coming to town they will need their keeper, Blair Currie, to be in super form to give them a chance. As touched on, Hearts are on a great run of form. Gary Mackay-Steven has six goals in his last four matches despite playing the 90 minutes just once whilst Liam Boyce has bagged in back to back games too. 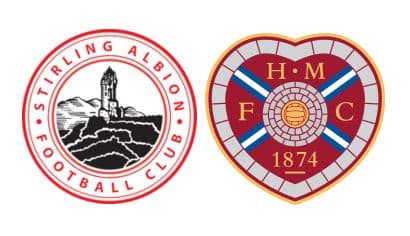