Steven N’Zonzi was always impressive at Blackburn Rovers and Stoke City, but even fans of both clubs may have raised an eyebrow when they saw him linked with some of Europe’s biggest clubs.

Indeed, the midfielder is reportedly a Chelsea transfer target, according to the Mirror.

But if you’ve watched him since he left Stoke and moved to Sevilla for £7million in 2015, it’s no real surprise.

The 28-year-old has blossomed into one of the best holding midfielders in the world and has become a crucial part of Jorge Sampaoli’s side that has exceeded all expectations in La Liga this season. 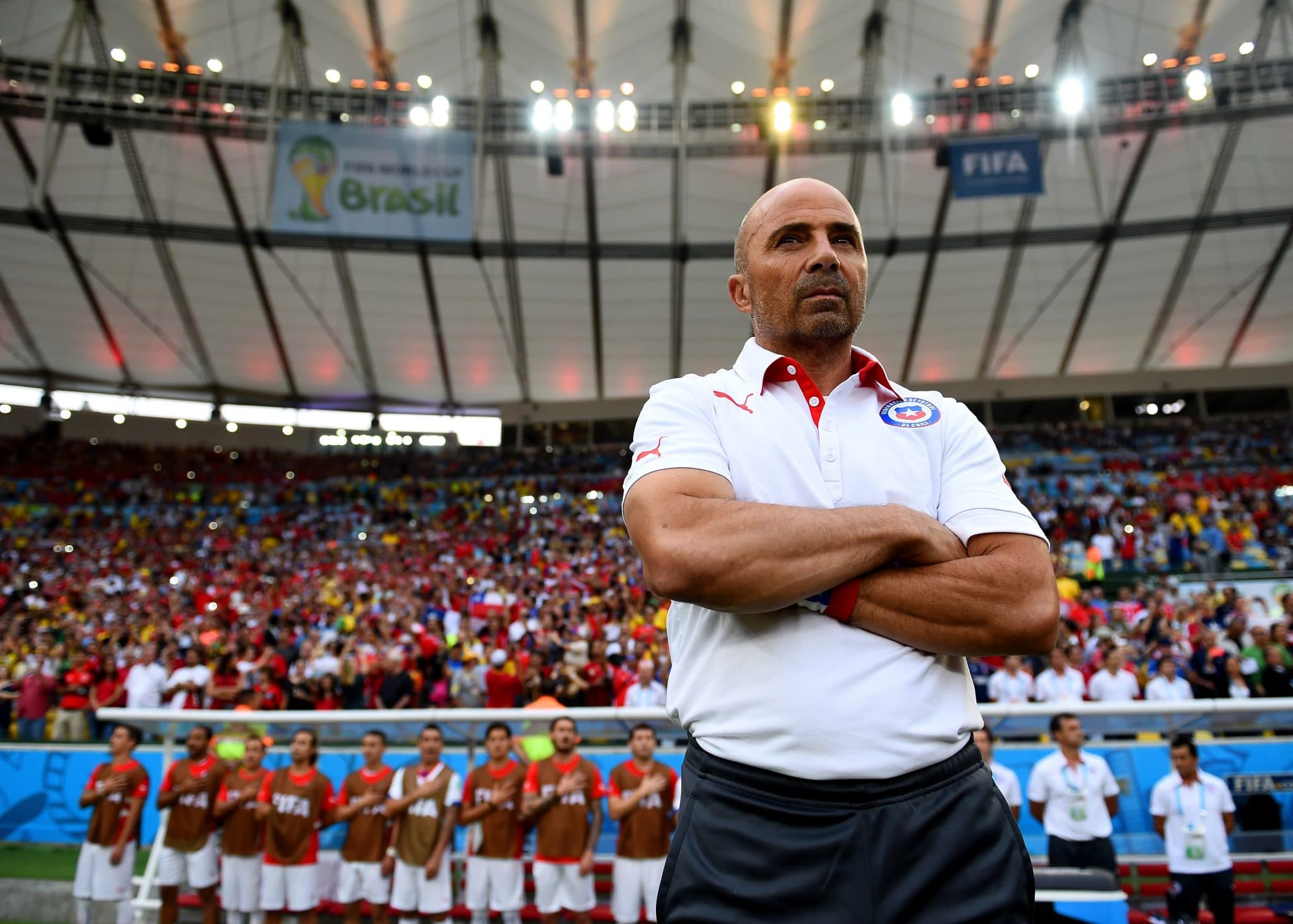 READ MORE: Why Jorge Sampaoli Has To Be The Next Barcelona manager

Just how good is N’Zonzi?

Former boss at Stoke Mark Hughes is a huge fan of the French midfielder.

Earlier this year, he was more than effusive when asked about N’Zonzi, but doesn’t think he’s become a better player at Sevilla.

He said: “We knew how good he was when he was here. He was under the radar to a great extent.

“I was amazed that nobody in the Premier League came and took him.

“Maybe people are trying to take a lot of credit now, saying he is better after going to Sevilla.

“I’m not sure about that, he was always a very good player at Stoke.

The fact that Steven N'Zonzi hasn't even made the France squad, yet he'd be England's best defensive midfielder by far just speaks volumes.

“Just think back to his last performance for us, against Liverpool when we beat them 6-1.

“He was very much part of that, so he wasn’t playing badly for us.

“I tried really hard to convince him to stay, but I think, deep down, he wanted to get into the France team and felt it couldn’t happen for him if he stayed at Stoke.

“I argued that point, but he felt he needed a different challenge, to be at a club, in his view, that had a chance of winning things.

“He hasn’t quite managed to get into the French team yet, which I’m surprised at.

“Maybe now he is getting the plaudits he never got here, because Sevilla is more high-profile.” 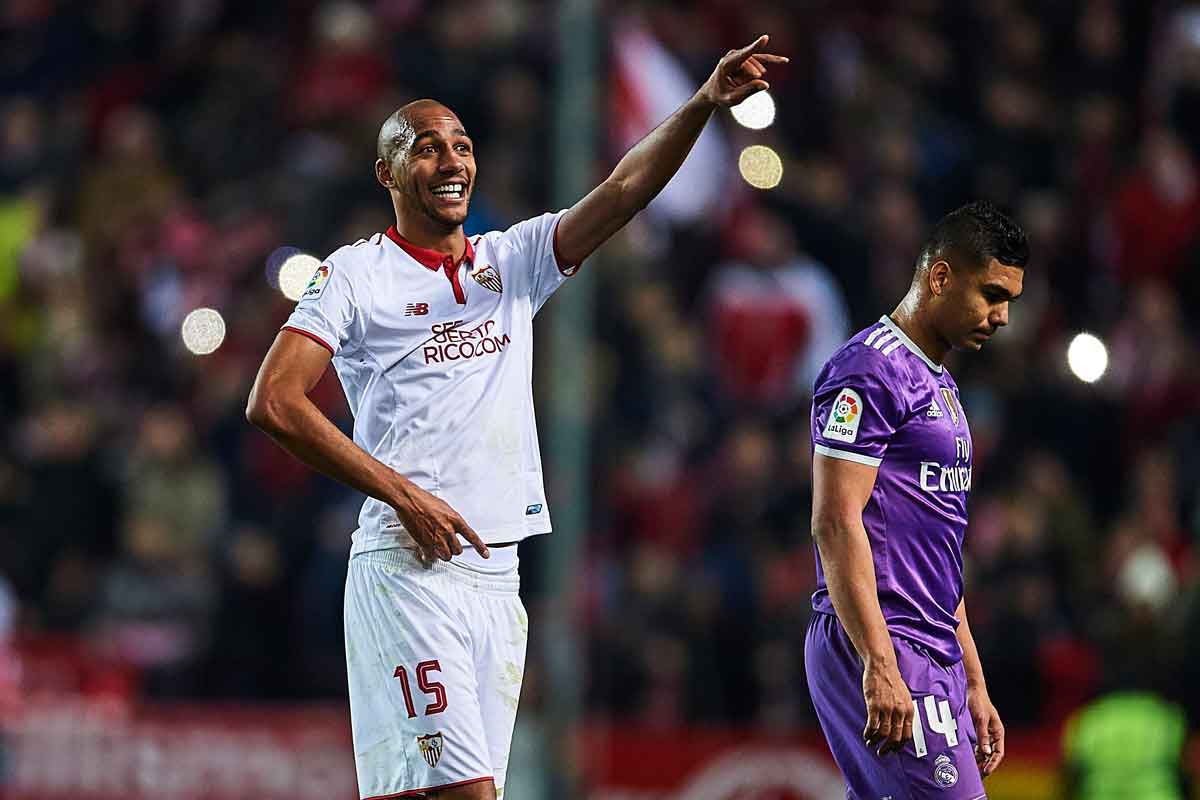 How much would N’Zonzi cost?

Sevilla have been quite open in wanting N’Zonzi to sign a new contract at the Ramón Sánchez Pizjuán due to his original buyout clause of €30million, and he did just that in January.

His new buyout clause is unknown, but will obviously be substantially higher – yet with the new Nike deal and Óscar’s departure, money should not be an option for the Blues.

The Mirror says Sevilla would accept £25million for the 28-year-old, but that seems far too low for someone who is so crucial to Los Nervionenses.

Indeed N’Zonzi was voted January player of the month in La Liga, and he is highly rated at Sevilla.

“Steven’s a player who has to continually fight against his appearance,” said director of football Monchi.

“His profile’s that of an eminently physical player, fight and strength, when although it’s true he has those qualities his principle characteristic is his use of the ball and technical quality.

“That’s why we signed him and where he makes the difference.”

And he’s right N’Zonzi, isn’t just a physical player, he loves a pass too – only Asier Illarramendi at Real Sociedad has made more passes than the Frenchman this season, and he’s played in two games more.

How does N’Zonzi compare to Chelsea’s options?

Despite his high passing rate, N’Zonzi doesn’t actually come out on top in terms of passes per 90 minutes if you compare him to Chelsea’s current midfield options of N’Golo Kanté, Nemanja Matic and Cesc Fàbregas and their league statistics. 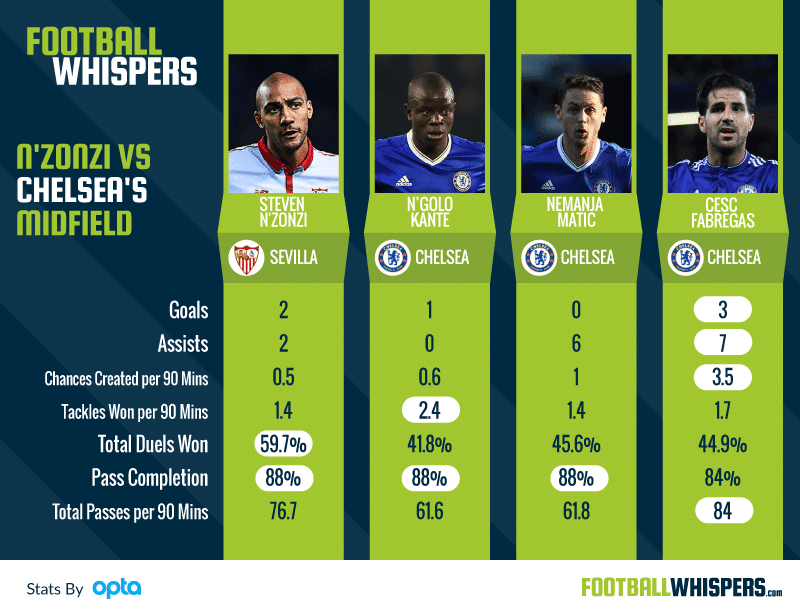 The Spaniard also has more goals than the other three this season too, despite his limited game time.

In fact, he has more assists too, which when you’ve watched Fàbregas is probably no surprise.

N’Zonzi has been directly involved in more goals than Kanté, but Matic and Fàbregas outshine him in that area.

It would be a worry if the two Frenchmen were paired alongside each other in the middle of the pitch – although N’Zonzi definitely looks like he could add that to his game.

The Sevilla man would need to start creating more chances per 90 minutes though, he’s currently bottom of the list – as he is for tackles won, just 1.4 compared to Kanté’s 2.4.

His pass completion rate of 88 percent is exactly the same as Kanté’s and Matic’s, which is extremely impressive when you consider just how many passes he N’Zonzi makes.

N’Zonzi has definitely come on as a player in Spain, despite what Mark Hughes may claim.

If Chelsea fans are expecting just a tough-tackling midfielder due to his stature they would be wrong.

Steven N'Zonzi has completed 359 forward passes in the Champions League this season, more than any other midfielder.

His passing is brilliant, and he could control the game from the middle of the pitch.

While people say there are two Kantés, N’Zonzi has been dubbed as the ‘octopus’ by Sevilla boss Sampaoli due to his influence in the middle of the pitch – it’s like he has eight legs.

And if two players as influential as Kanté and N’Zonzi played alongside each other, it could be frightening for the Premier League.

Will Antonio Conte stick with 3-4-3 at Chelsea?