The former Blackburn Rovers player has blossomed since his move to La Liga in 2015 and now, again, the 28-year-old has been rumoured with a move to the Etihad to play under Pep Guardiola.

At the end of the winter transfer window, the midfielder signed an extension to his current contract, keeping him at Sevilla until 2020, but moving his release clause from €30million to €40million.

Still peanuts for the Manchester side this summer.

His comments back-up the fantastic performances the Frenchman has been putting in since he moved to Andalusia in 2015, and why clubs would still be willing to match his release clause.

Although the price has gone up by another €10million, there is still a deal to be done. Juventus ruled themselves out with the new price, but Spurs and Barcelona were then linked.

Pep Guardiola is still looking for the right pieces to suit his style at the Etihad, and after somewhat disappointing their way to a third-placed finish, the Catalan coach knew he needed to make changed.

Three full-backs and a goalkeeper have signed, money has been spent to strengthen the back-line. Bernardo Silva boosts the attack, but there still seems to be a gapping hole in the middle of the park.

Guardiola used a number of players in the central position last season, with Fernandinho taking the main role. It was so much of an issue that Yaya Toure managed to force his way out from the cold and into the starting XI.

N’Zonzi shouldn’t be hard to negotiate with, his agents, Mioc & Prskalo have clients in both England and Spain, so although they may not have dealt with Pep or City in the past, this is not a new area for them. Plus, with N’Zonzi starting his English playing career in Lancashire, he will know the area well.

N'ZONZI INTO THE PEAK OF HIS CAREER

Although it feels like the Frenchman has been around for a long time, he is still in the peak years of his career and could easily play at the highest level for another four years.

There’s no sale on value, but when you are paying £53million for Kyle Walker and more for Benjamin Mendy, that’s not a concern for this club.

What N’Zonzi would add, compared to what they already have, is a huge physical presence. Not just in terms of his height, but his athleticism and mobility. 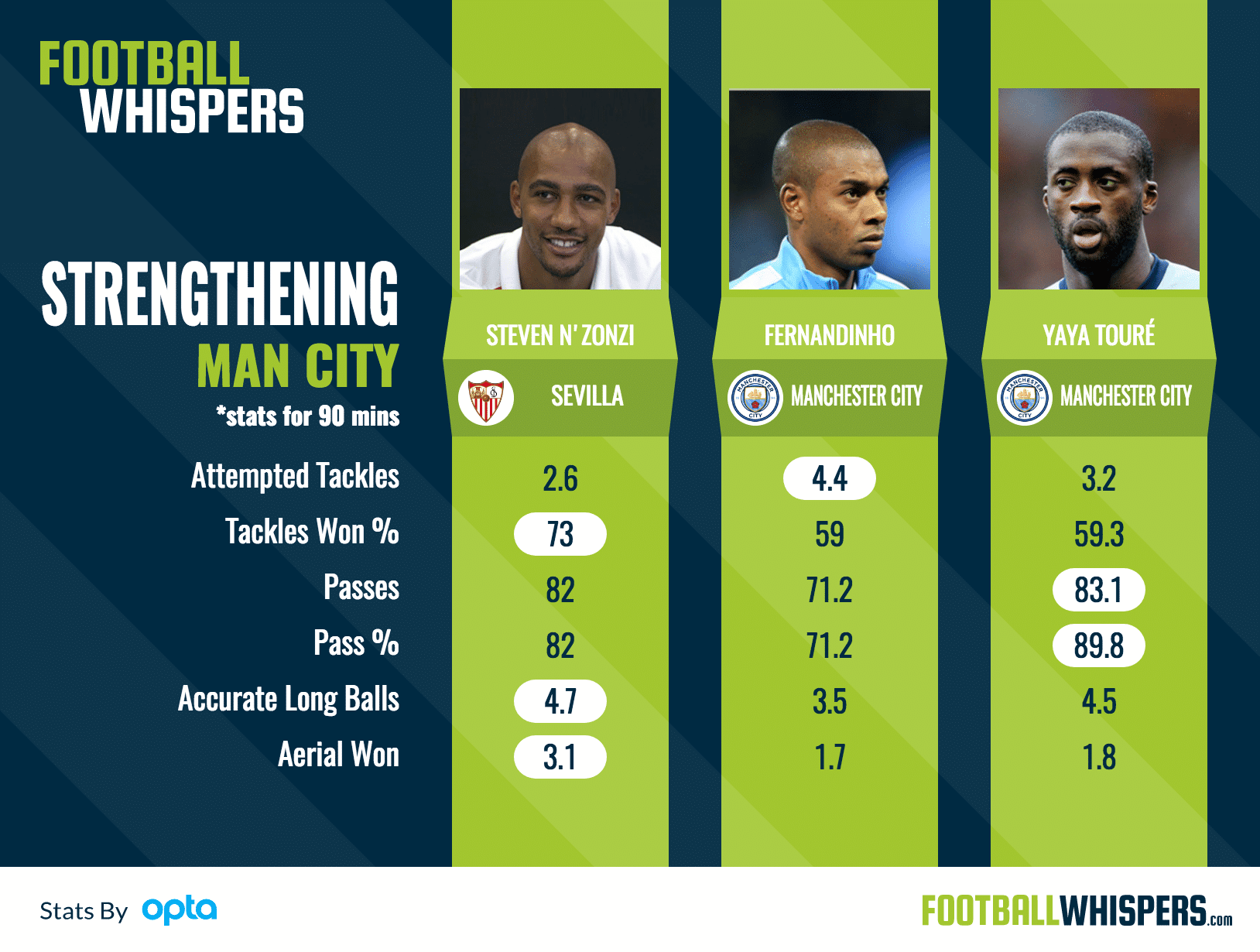 On first look, he has a lazy, languid style, which give the impression he’s not quick, but that gets blown away when you watch him play. There are similarities to N’Zonzi and what Yaya Toure used to do for Barcelona, just before Pep shipped the Ivorian out of the Nou Camp.

He is aerially dominant, but you’d expect that from someone who stands at 6 foot 3 inches tall. Primarily he’s a protector, either sitting in front of the defence in Sevilla’s 4-1-4-1, or he can play a little further forward when they go 3-5-2 and Victor Iborra plays as the sitter. Versatility is key to what Guardiola does and although not classed as a box-to-box midfielder, N’Zonzi has the tools to do everything.

Against Lyon in the UEFA Champions League, you can see from the graphic below that the Spanish side are playing with two banks of four. There is a lot of space between the two lines, so the obvious pass to Alexandre Lacazette is on. 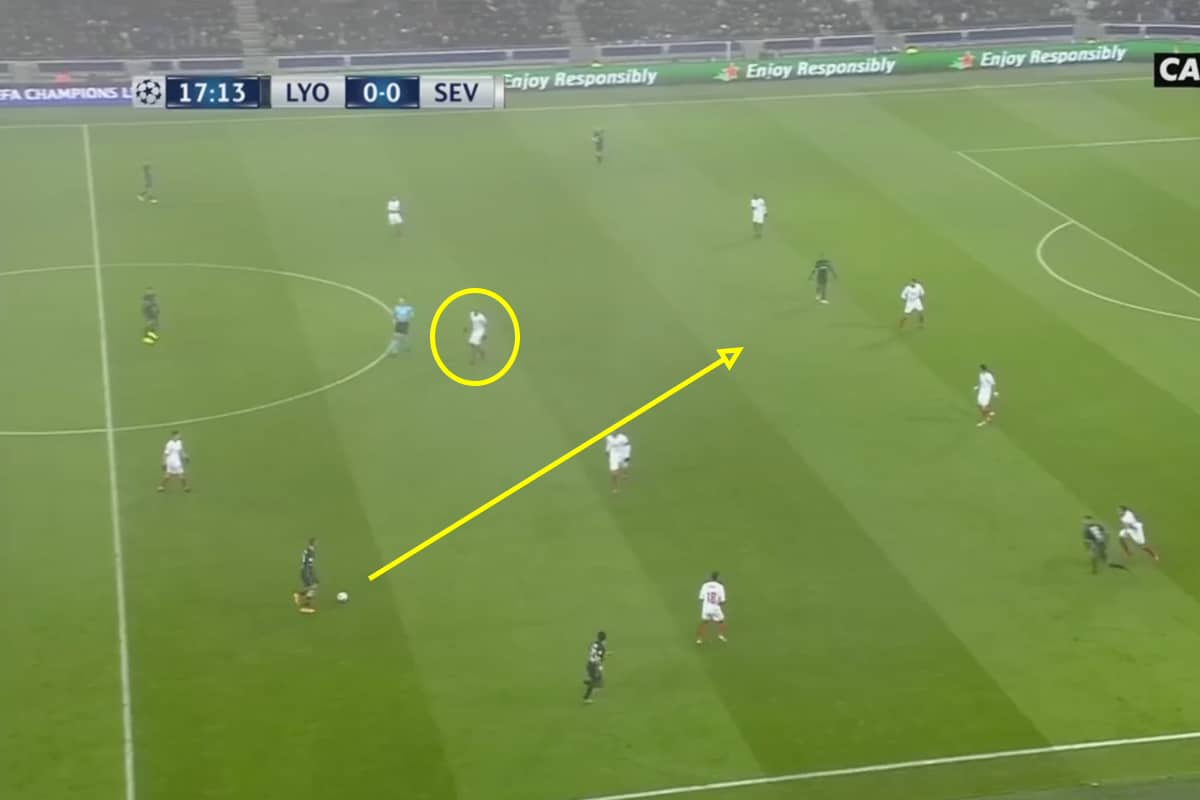 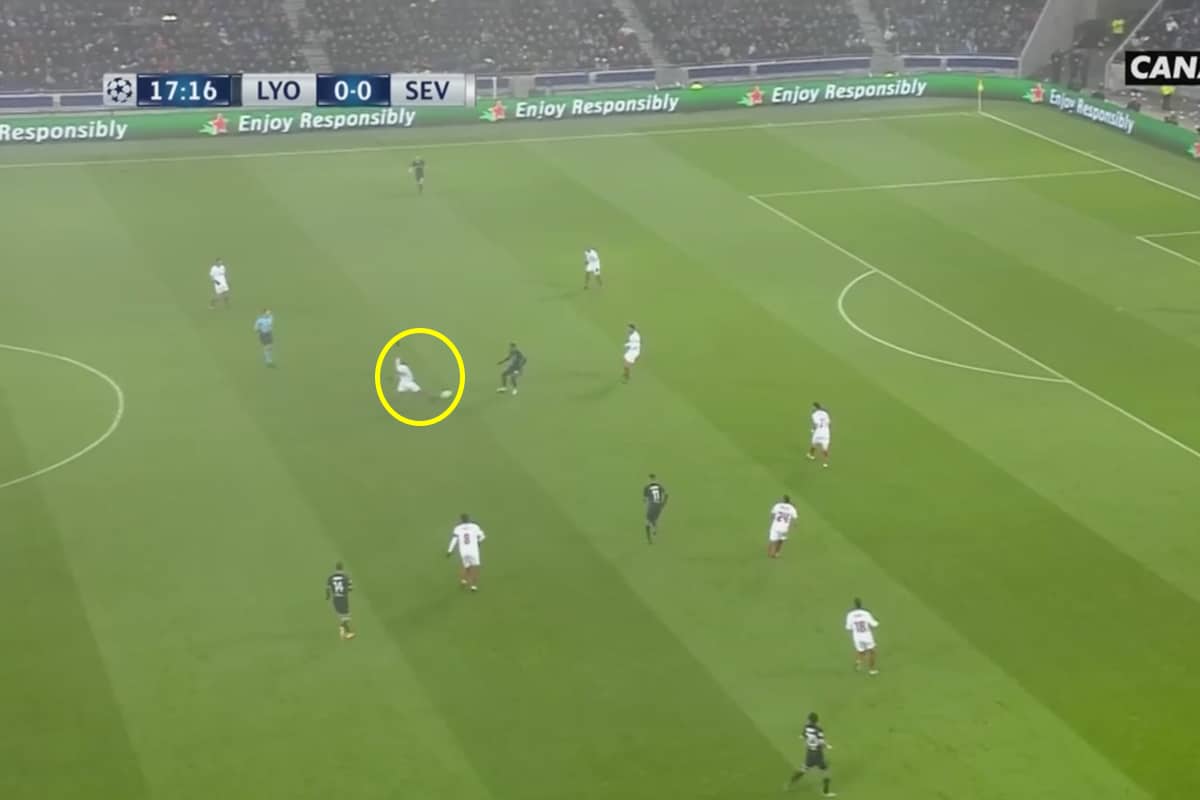 N’Zonzi (yellow), almost inviting the ball to be played is ready. As soon as Sergi Darder tries to thread it through, the midfielder is waiting to ponce, he reads it well, gets to the ball before the forward and clears the danger.

That’s a move that Lyon play so well and then look for little link passes, N’Zonzi’s reading of the situation was perfect.

As it was when Grzegorz Krychowiak was his partner, unlike Fernandinho, he’s got help in his defensive duties, but still averages 1.9 tackles, 1.1 interceptions and 1.5 clearances this season. The Brazilian makes more tackles, but with how City have defended, he’s had to.

Where N'Zonzi has the advantage, he wins a higher percentage, but 14 per cent. It's not just about when you tackle, and how and if you are successful.

The 28-year-old is far from just a destroyer though. His intelligence in reading the game comes in handy when the Spanish side want to play on the front foot.

In the recent 4-1 over Malaga, it was N’Zonzi that got the ball rolling. The ball is won back on the left, the midfielder (yellow), playing just ahead of Iborra, takes a look ahead of him before he even receives the ball and sees space to attack.

Rather than wait for the ball, then attack, he pushes up into the gap, giving him a better position. 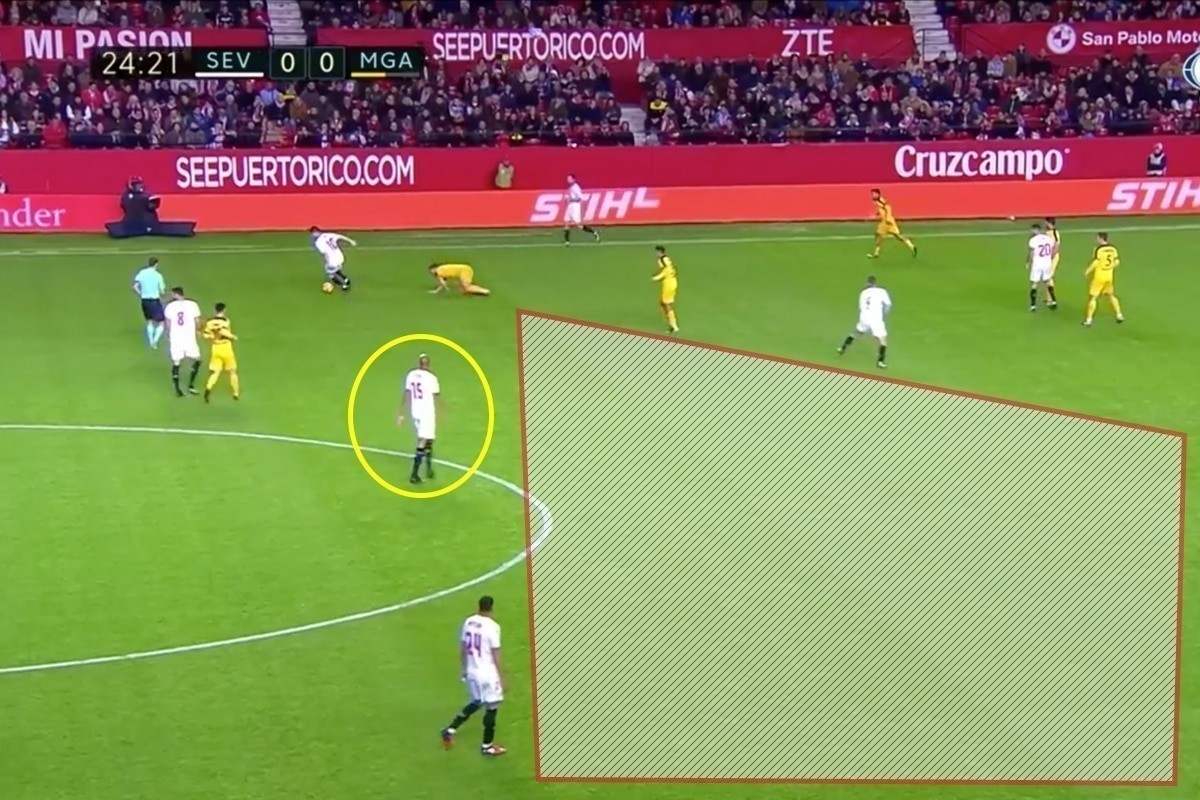 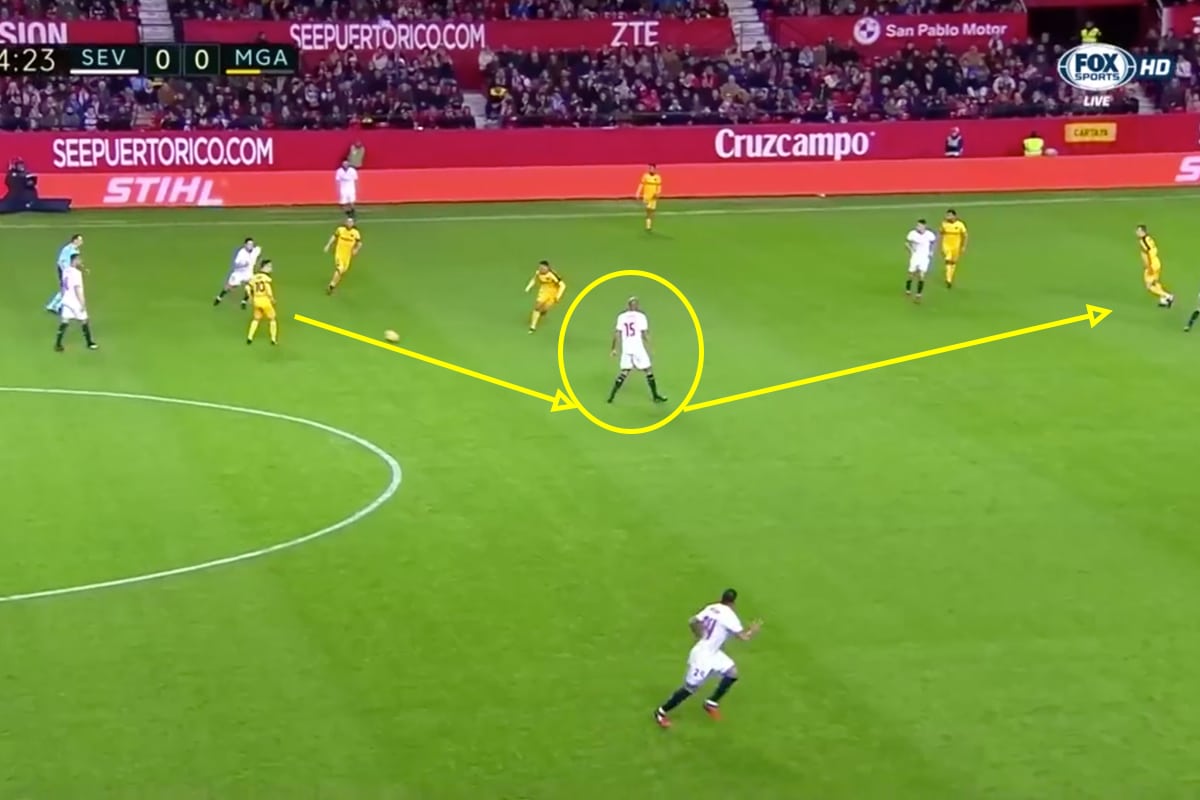 His pass is slipped perfectly with his left foot into Luciano Vietto and the Argentine forward is in for the easy finish. 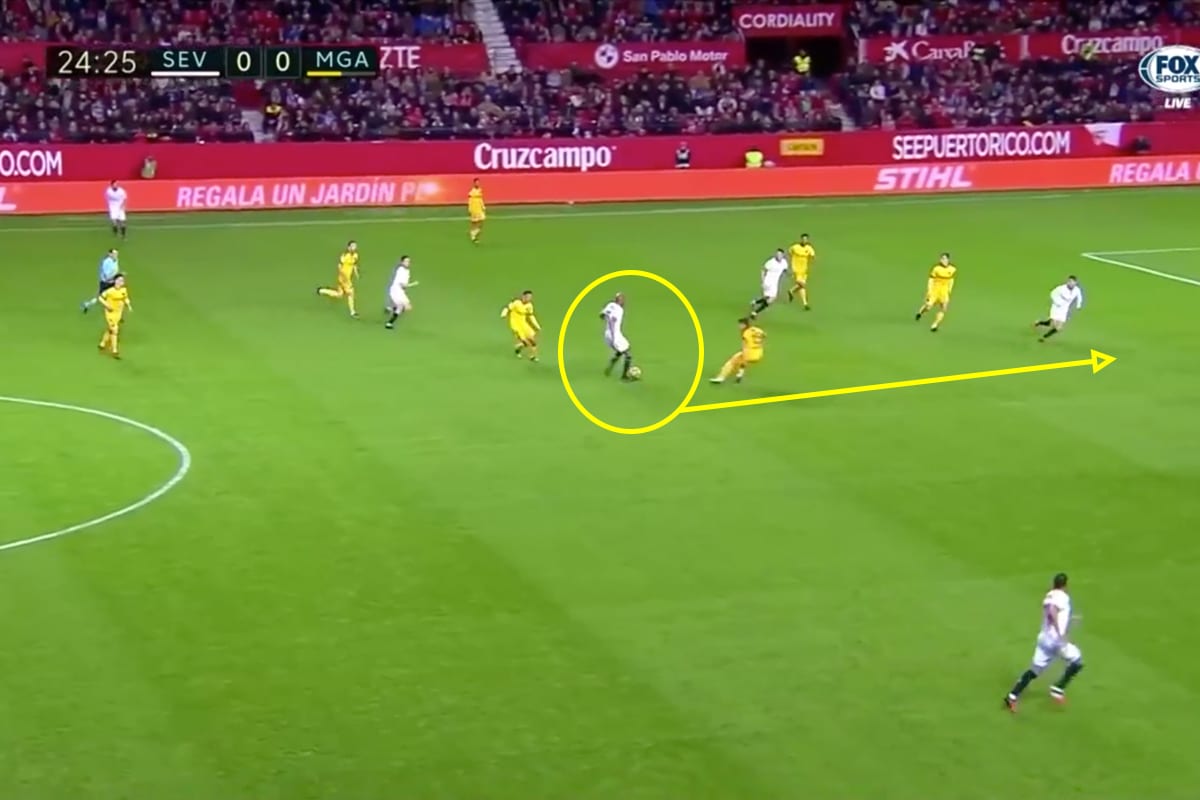 Not only did that move show has passing range and his vision, it displayed his ability on both feet. He can pass on shoot with his left as well as being more natural on his right.

Due to his speed across the ground, long legs and strength on and off the ball, smaller midfielders often don’t stand a chance. He’s almost the perfect physical specimen.

On the downside, you would want him to show that attacking threat in the final third a little more. Often he’s the pass that gets the team moving forward, rather than the final ball.

In Guardiola’s team, when the opposition are sitting in deep, you want someone who can turn, and when the option isn’t on, take on players, commit defenders, and open up better angles. N’Zonzi can do that, he’s shown it on occasion and just need to right coach and team to showcase that side more.

Too often when you have a player starting out of position, or getting used to a new system, they can steam into tackles, rush to make a move and get caught out.

N’Zonzi, now a seasoned veteran, has the sense to know what’s going on and pick the best option for the team.

Against Granada in the league, there was a moment that showed his anticipation and reading of the game. The ball was cleared out of the home team’s penalty area and they look to spring a counter.

With the ball in the air, it’s there to be won and many a midfielder would have jumped in regardless of being the clear winner or not. 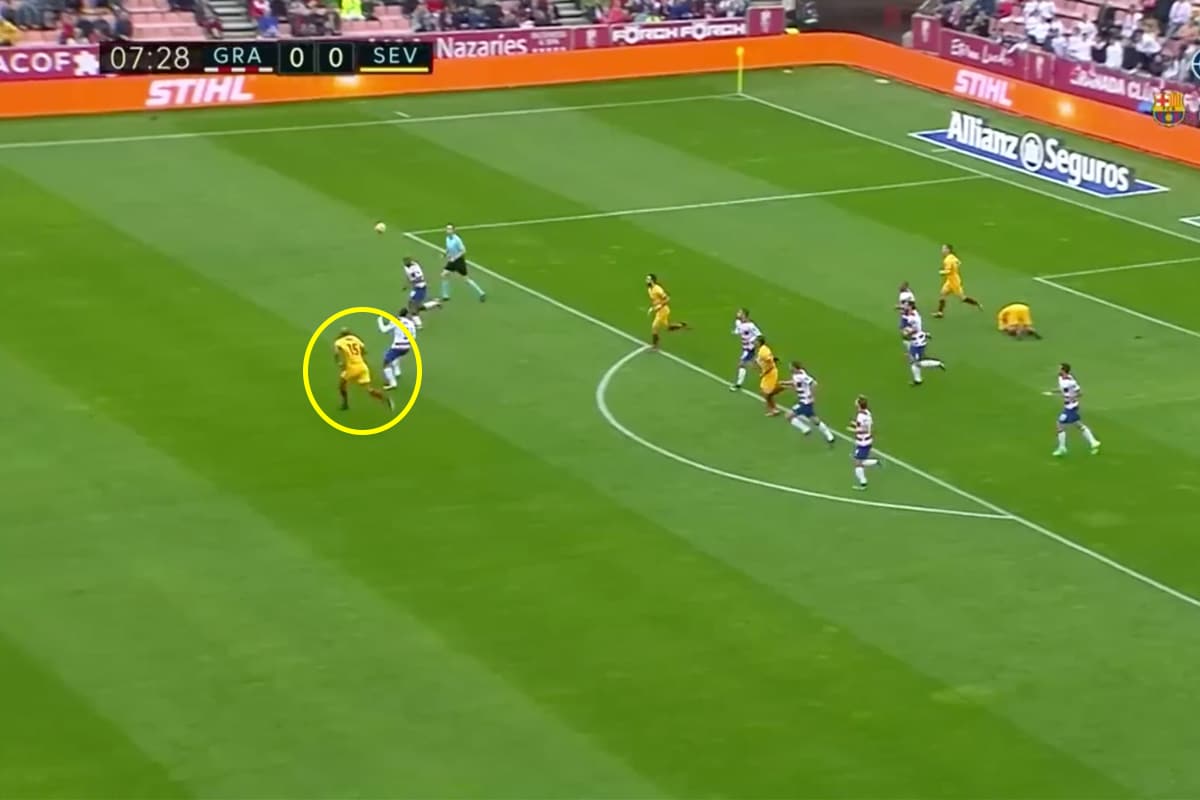 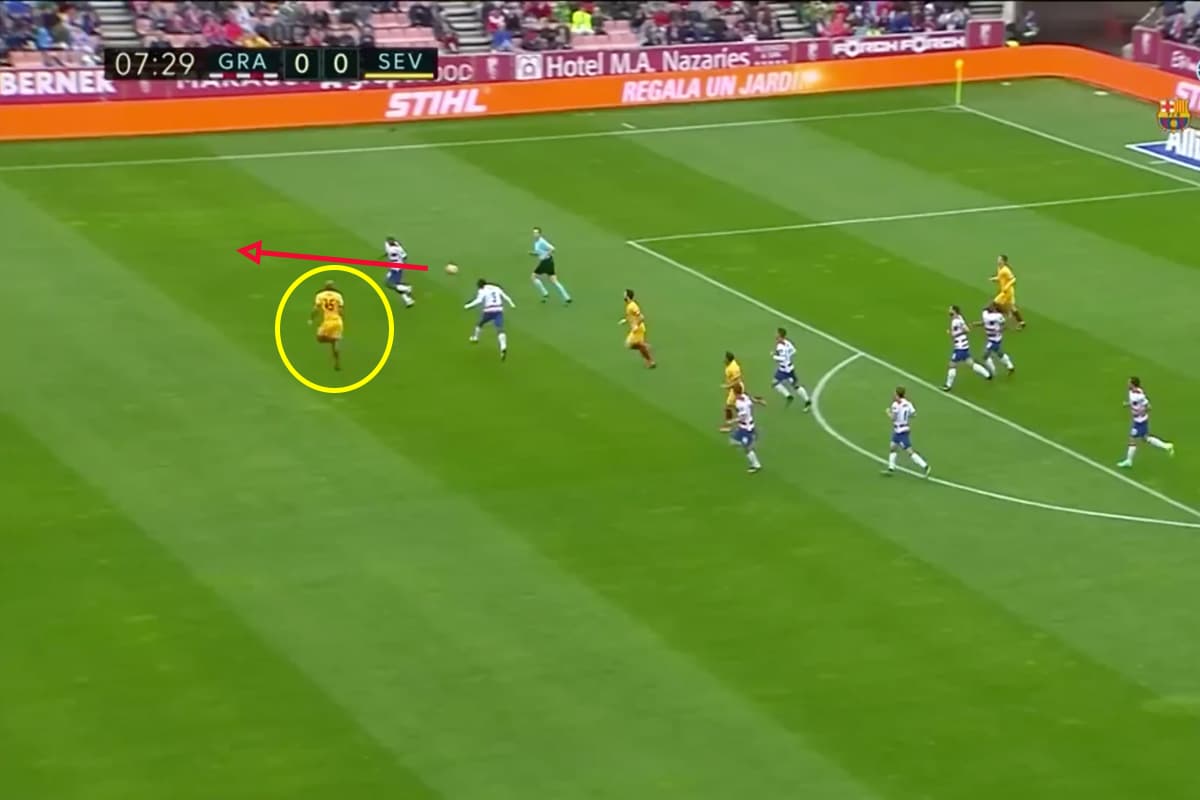 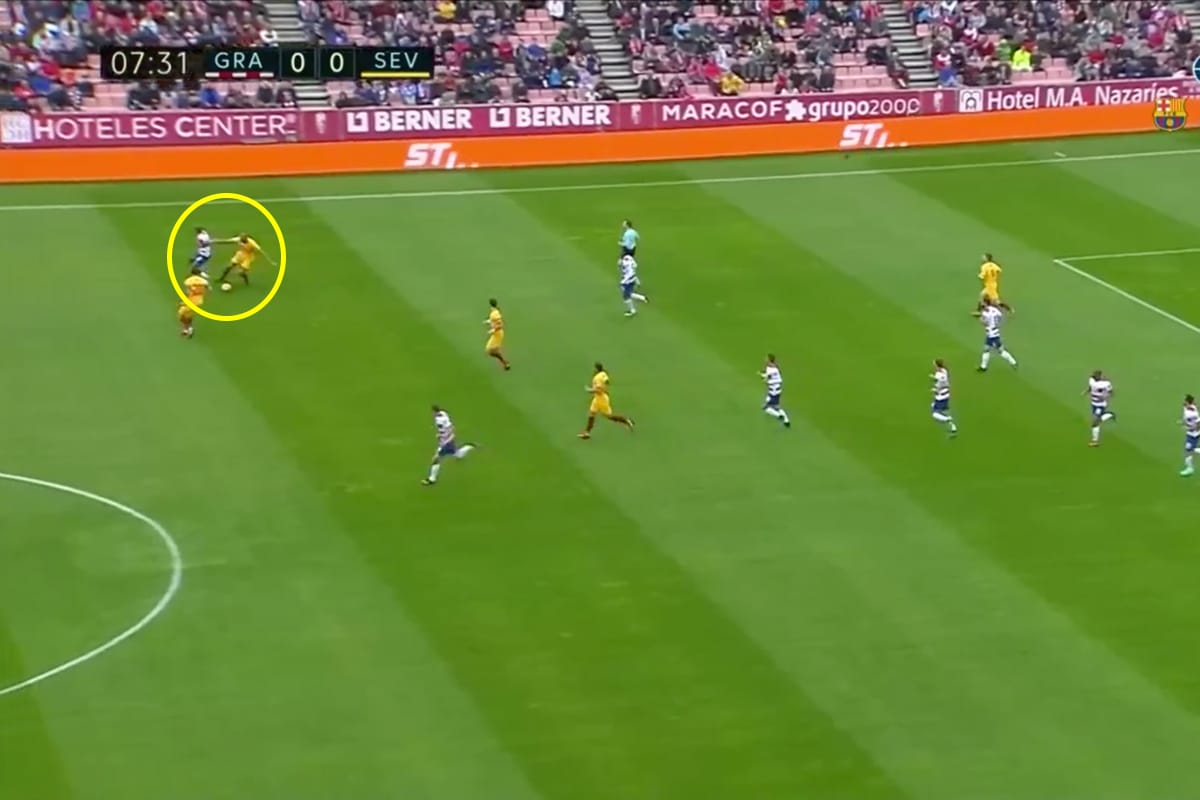 As you can see from the graphic above, there is no one behind N’Zonzi (yellow) to protect the break, so rather than steaming in, as soon as the Granada player is focused on the header, the Sevilla man, peels off and chasing down the runner.

The Frenchman gets there well before his opponent and the attack breaks down due to his vigilance.

City need that protection. The way Guardiola plays, teams are going to hit on the break. Leicester City showed the league how to do it.

Bringing in N’Zonzi would give them a very good passer, but also that physicality and defensive presence they can often lack in midfield.

With the attacking options that City have this season, plus the attacking nature of Walker and Mendy at full-back, they are going to need someone in the centre of the park who can not only patrol and defend, but someone who has the legs to cover a lot of ground.

Players like rumoured transfer target, Julian Weigl, may be the future, you know he’s talented when Barcelona and City are looking at him.

However, for half the price in the current market, and the availability of picking up an experienced player who can instantly settle, N’Zonzi is the perfect summer signing for Guardiola.