Traditional wingers were not a feature of Watford‘s play last season – but their interest in PSV Eindhoven's Steven Bergwijn and Rennes‘ Ismaïla Sarr suggests that is set to change.

Gerard Deulofeu, the one natural winger at Vicarage Road currently, spent most of the season paired upfront with Troy Deeney. Javi Gracia's innovative 4-2-2-2 system saw Will Hughes and Roberto Pereyra take what were, nominally at least, the role of ‘wingers' but they tended to drift inside.

Yet all summer long the Hornets have been pursuing a pacey wide player. First, it was Allan Saint-Maximin, missing out to Newcastle United, then it was Sarr, now it's Bergwijn. So what would he bring to Vicarage Road?

Capable of playing on either flank or even through the middle as a central forward, Bergwijn scores goals and provides assists. In abundance. He notched 14 times in the Eredivisie last season, eclipsing his previous best of eight, while his 12 assists were an improvement on the 11 he recorded in 2017/18.

Overall, that meant he scored or assisted 0.82 per 90 minutes – in other words, he played some part in a goal in almost every one of his 33 league appearances for PSV. 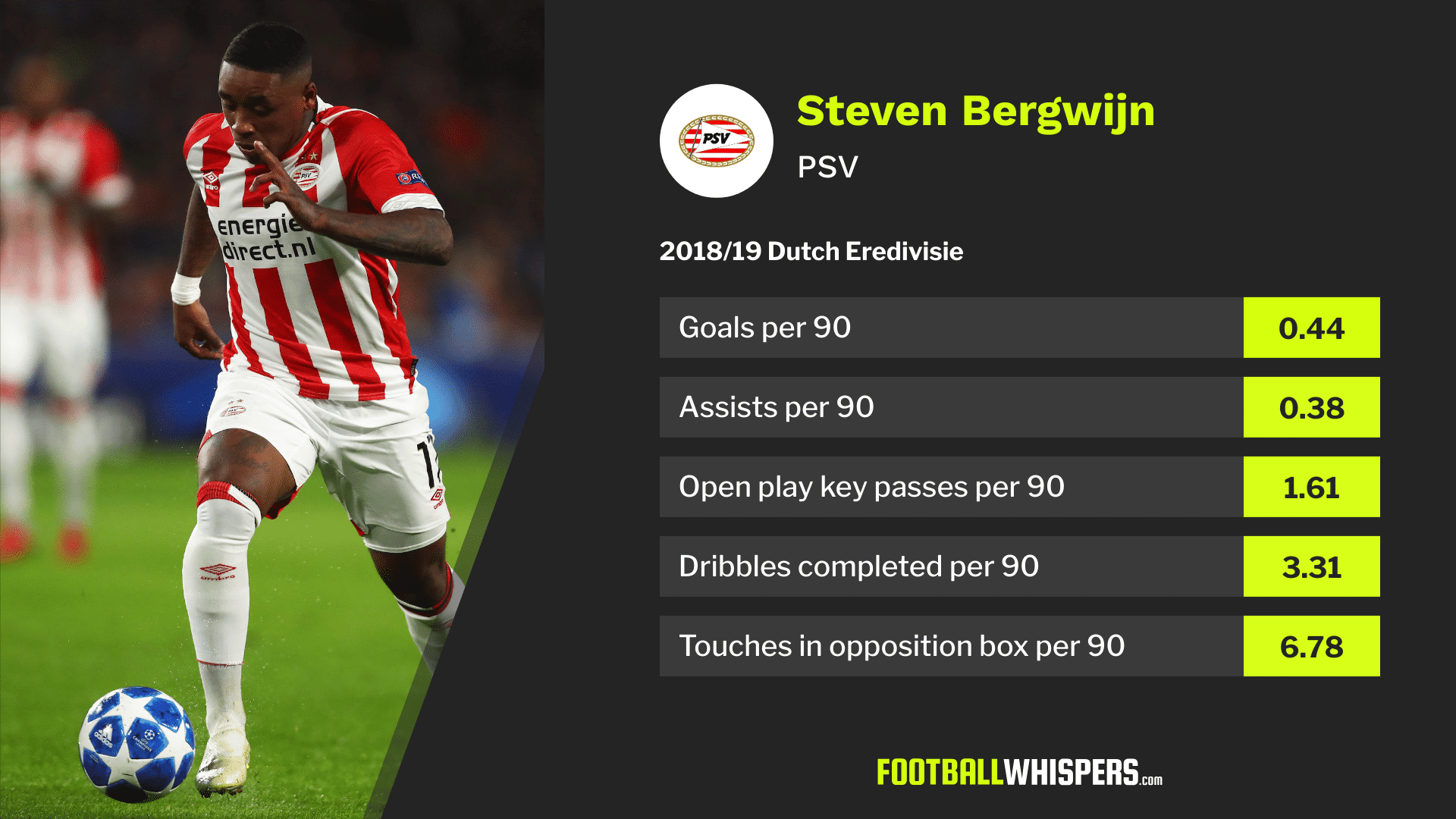 What makes his already remarkable scoring record all the more impressive is those 14 strikes came from just 1.38 on-target efforts per 90, which was a figure only good enough to rank 14th in the Eredivisie. Bergwijn is not a particularly high-volume shooter, his total 3.05 efforts per 90 putting him 16th among forwards in the Netherlands in 2018/20.

But the 21-year-old is more than just a finisher and he gets involved earlier in the play too.

With 3.31 successful dribbles in the Dutch top-flight last season, he was second only to Marcus Edwards, the Tottenham Hotspur prospect on loan at Excelsior.

Bergwijn ranked fifth for passes in the opposition half (24.1), which shows he is progressive and forward-thinking, and second for completed through balls – 0.31 per 90 from an attempted 0.47.

With an average width of possession of just 24.98m last season, Watford ranked 16th in the Premier League. That was very much by design with full-backs Daryl Janmaat and José Holebas given license to get forward. Signing Bergwijn would enable Hornets boss Gracia to change the dynamic.

The usual caveat of buying players from the Netherlands applies and Watford have been stung before. Another winger, Steven Berghuis, joined the Hornets from FC Twente in 2015 and managed just nine Premier League outings before returning to his homeland having shown fleeting glimpses of his potential.

But Bergwijn has been linked with Liverpool and Tottenham in the past and, according to reports, Bayern Munich are keen on the fleet-footed Dutch international too as they seek to replace Arjen Robben and Franck Ribéry.

It's safe to say Watford are shopping in different markets nowadays.