Steven Bergwijn has been perpetually linked with a Premier League move since bursting onto the scene with PSV in 2014.

The 22-year-old is now the main man for the Eredivisie giants and is currently in possession of the famous number 10 jersey.

Since the start of the 2017/18 campaign, the Netherlands international has 56 goal involvements in the Dutch top flight, 29 of those have been assists. He’s pulling the strings for Ernest Faber’s side and has averaged a goal or an assist every 89 minutes this season.

Team-mate Donyell Malen stole the spotlight earlier on in the campaign but injury has resulted in Bergwijn taking centre stage yet again. And clubs are noticing. According to reports, the Amsterdam-born winger, who swapped Ajax for rivals PSV in 2011, is a transfer target for Tottenham Hotspur. 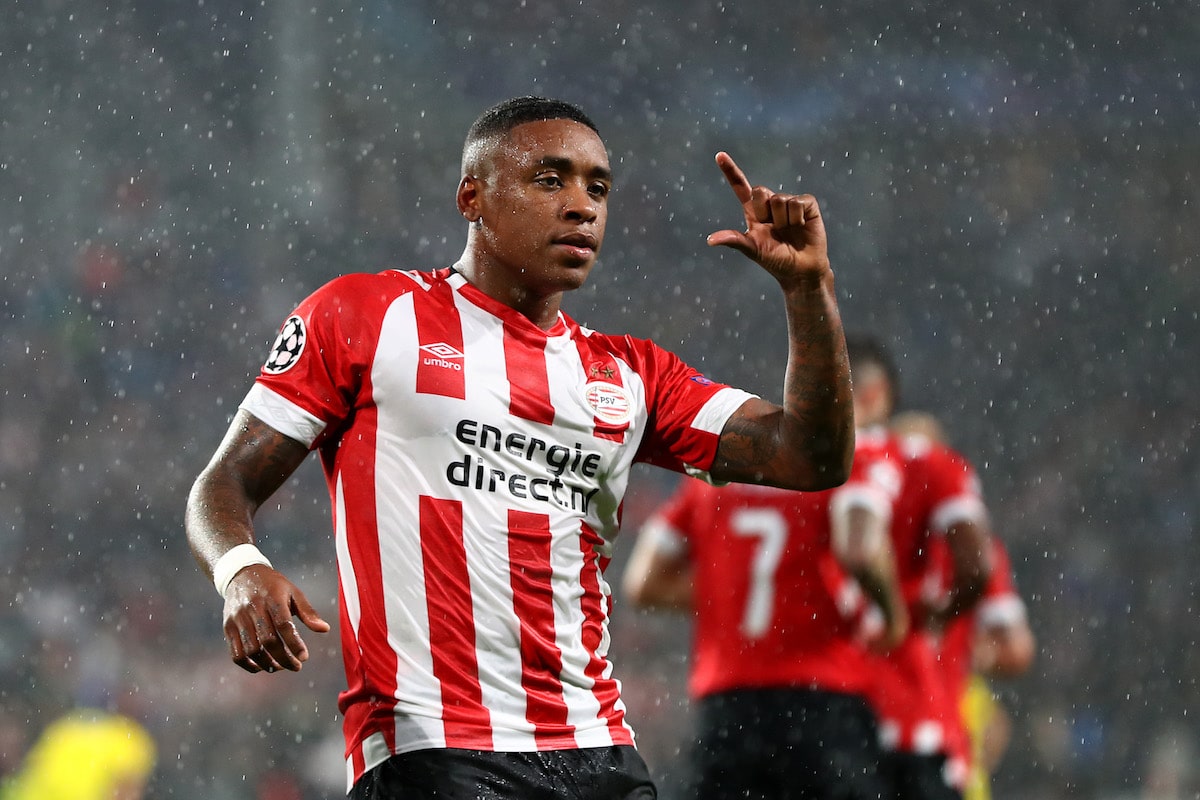 Outlets in the Netherlands claim Daniel Levy and José Mourinho met with Bergwijn’s representatives recently and that a deal appears to be close. The fleet-footed flyer has a £30million release clause in his deal which becomes active in the summer. Leicester City are also believed to be keeping tabs on the versatile attacker but are behind Spurs in the race to acquire him.

Various reports recently have linked the 2018/19 Champions League finalists with a host of attackers. With Harry Kane ruled out, Mourinho needs attacking reinforcements. Krzysztof Piątek, Willian José, Timo Werner, Wout Weghorst and Paco Alcácer have all been named as players on the club’s wishlist, and that is just in the last week.

While a pure goalscorer may seem like the solution, it could cause problems down the line when the Spurs No.10 is back and firing. It's why the reports linking Spurs with Bergwijn make the most sense. His arrival would allow Mourinho to shift Heung-min Son into a central area without losing anything the former Bayer Leverkusen man brings to the team out wide. 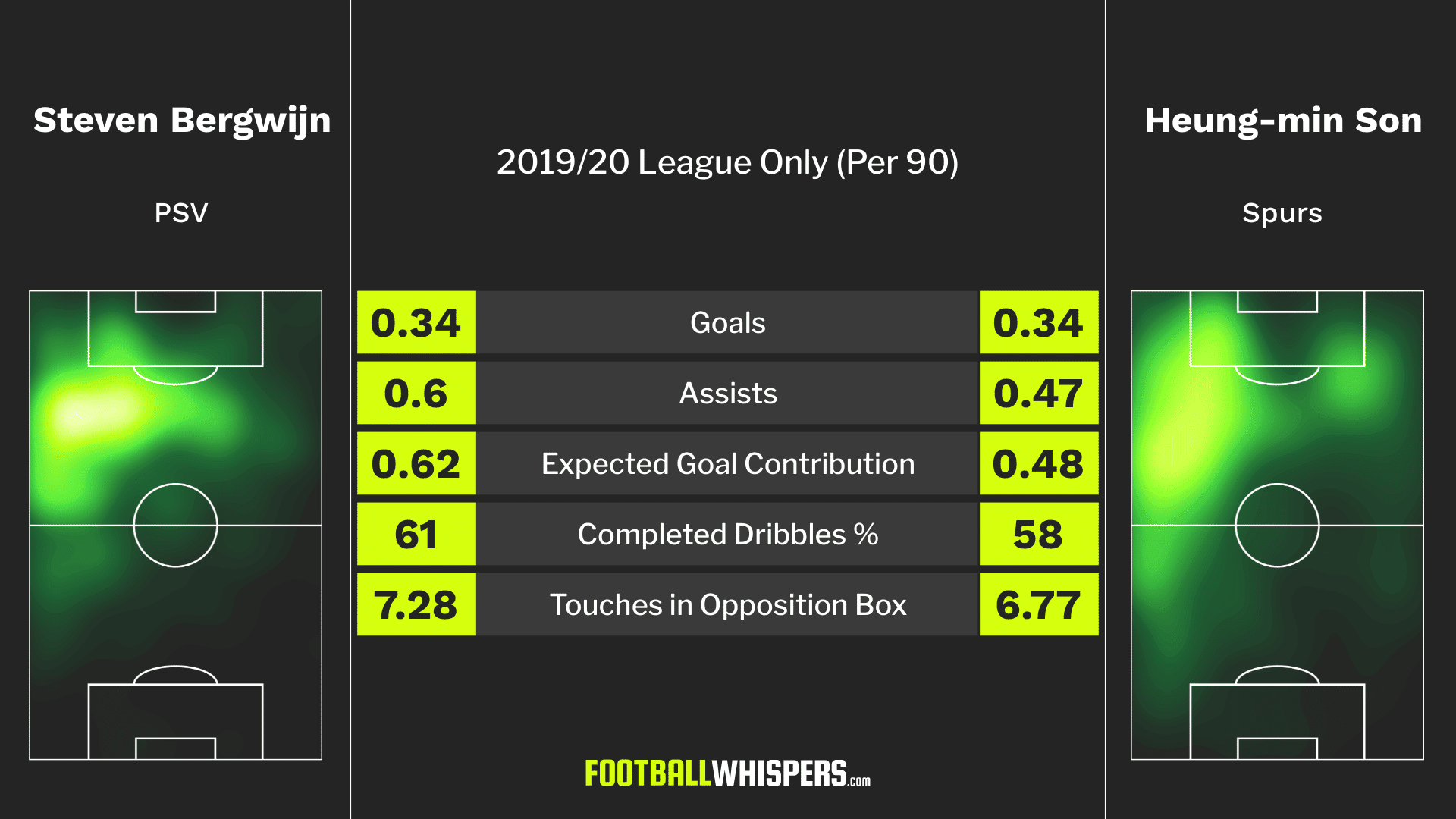 His explosive pace, coupled with his aggressive style in and out of possession, means he’s the type of winger who gives every full-back nightmares. He’s comfortable playing on the outside or the inside of a full-back, too.

He’s incisive, progressive and is always looking to get into threatening positions. The PSV No.10 is a whirlwind and he’s difficult to stop. Bergwijn is still raw but that’s part of his charm and why, perhaps, a host of top European clubs are taking such a keen interest. There’s work to be done but, with a few refinements, he could be one of the best in the world in his position.

Liverpool reportedly wanted him as an alternative to Ousmane Dembélé, though a move never materialised. Manchester United have been linked, Chelsea are believed to be long-term admirers while Arsenal wanted to add him to their attacking arsenal for some time. If Spurs land him, it'll be a coup.

Son is considered by many to be one of the best attackers in the Premier League. He's been involved in 13 Premier League goals this term, with six goals and seven assists, and he's performed well in a number of positions. A return of 0.81 goals or assists per 90 is well above his expected goal contribution of 0.48 but elite forwards tend to outperform their basic numbers and he's done this across multiple seasons.

The Korean international progresses the ball, too. He's completing, on average, nearly 60 per cent of his dribbles and attempting close to five per 90. The Spurs No.7 is also heavily involved in the final third with 15 per cent of his touches coming in the penalty area.

As the above graphic shows, Bergwijn's posting similar averages to Son this season. Granted, he is playing in a different league, one many deem to be weaker, it shouldn't take anything away from the PSV man. He profiles exceptionally well.

Bergwijn has been involved in 0.94 goals per 90 while his expected goal contribution is 0.62 which shows his form is sustainable. Even if he reverted to the average, he'd still be something of an output merchant. He's completing slightly more dribbles (three per cent to be exact) though he is attempting fewer (4.4 compared to Son's 4.78). Furthermore, Bergwijn is averaging 11 per cent of his touches in the penalty area.

The 22-year-old creates havoc and this, in turn, results in chances for team-mates. Mourinho has always been an admirer of dangerous wide players who pull their weight defensively and Bergwijn is just that. He's recovering the ball five times per 90, the same amount as Son.

If the reports are true and he is available for £30million, the move would represent no risk at all. Given his age and his playing profile, Spurs could sell him if he fails to hit the heights they want and they'd still manage to break even.