West Ham United have become the latest club to be linked with a move for Montpellier striker Steve Mounié.

The Hammers struggled for goals this season, with no one reaching double figures in the Premier League. The 22-year-old French forward scored 14 times in Ligue 1 and reports suggest that Slaven Bilic has joined Watford and West Brom in the race for the Benin-born striker. 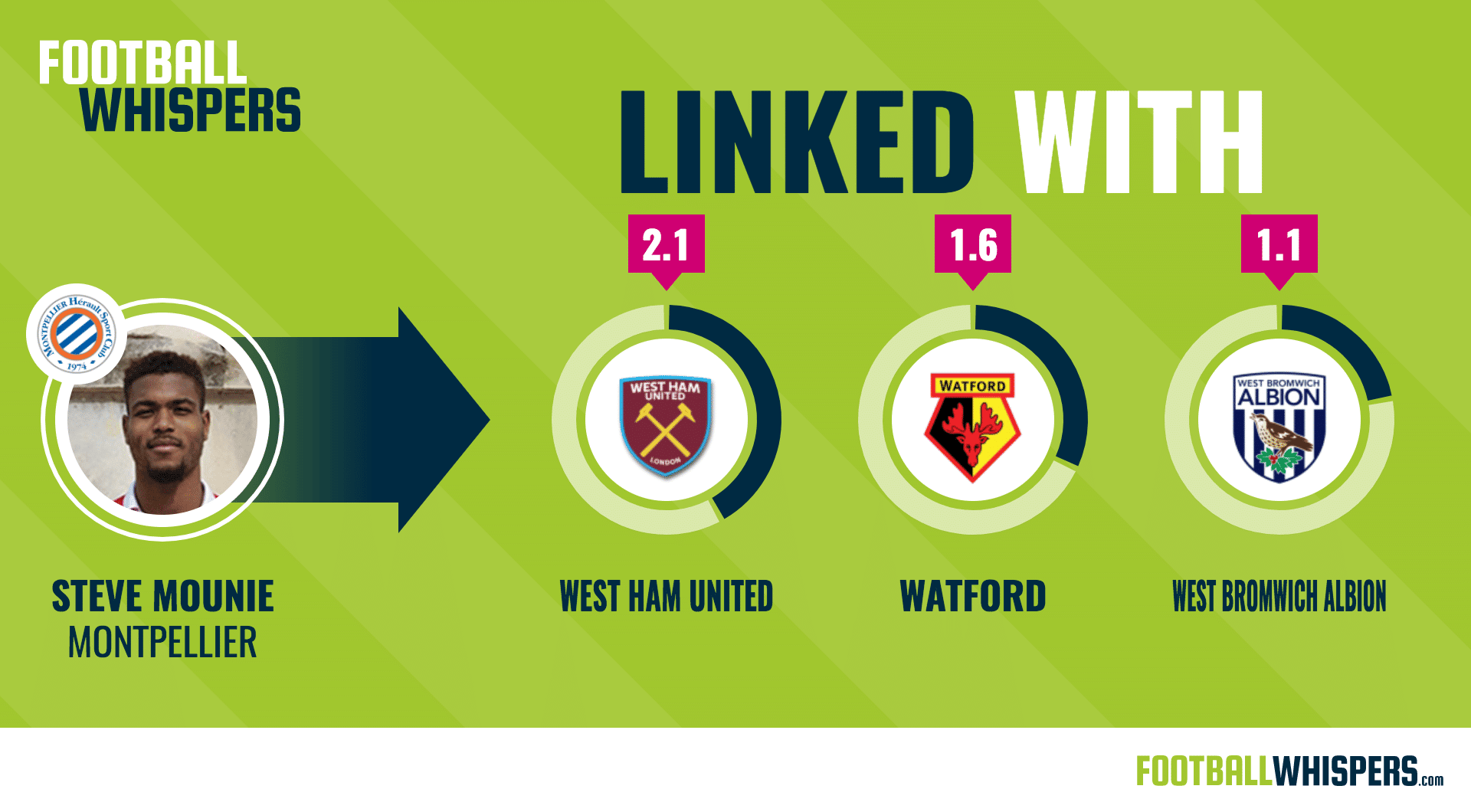 Last summer, West Ham put their money on Simone Zaza, but the Italian was a complete failure and with injuries to Andy Carroll restricting the former Newcastle United forward to just 15 starts, the London Stadium fans often had to rely on the goals from Michail Antonio and Manuel Lanzini to keep them out of trouble.

Rumoured to be interested in Manchester City’s Kelechi Iheanacho, they will have to fight off Southampton, Lazio and even Borussia Dortmund for his signature. 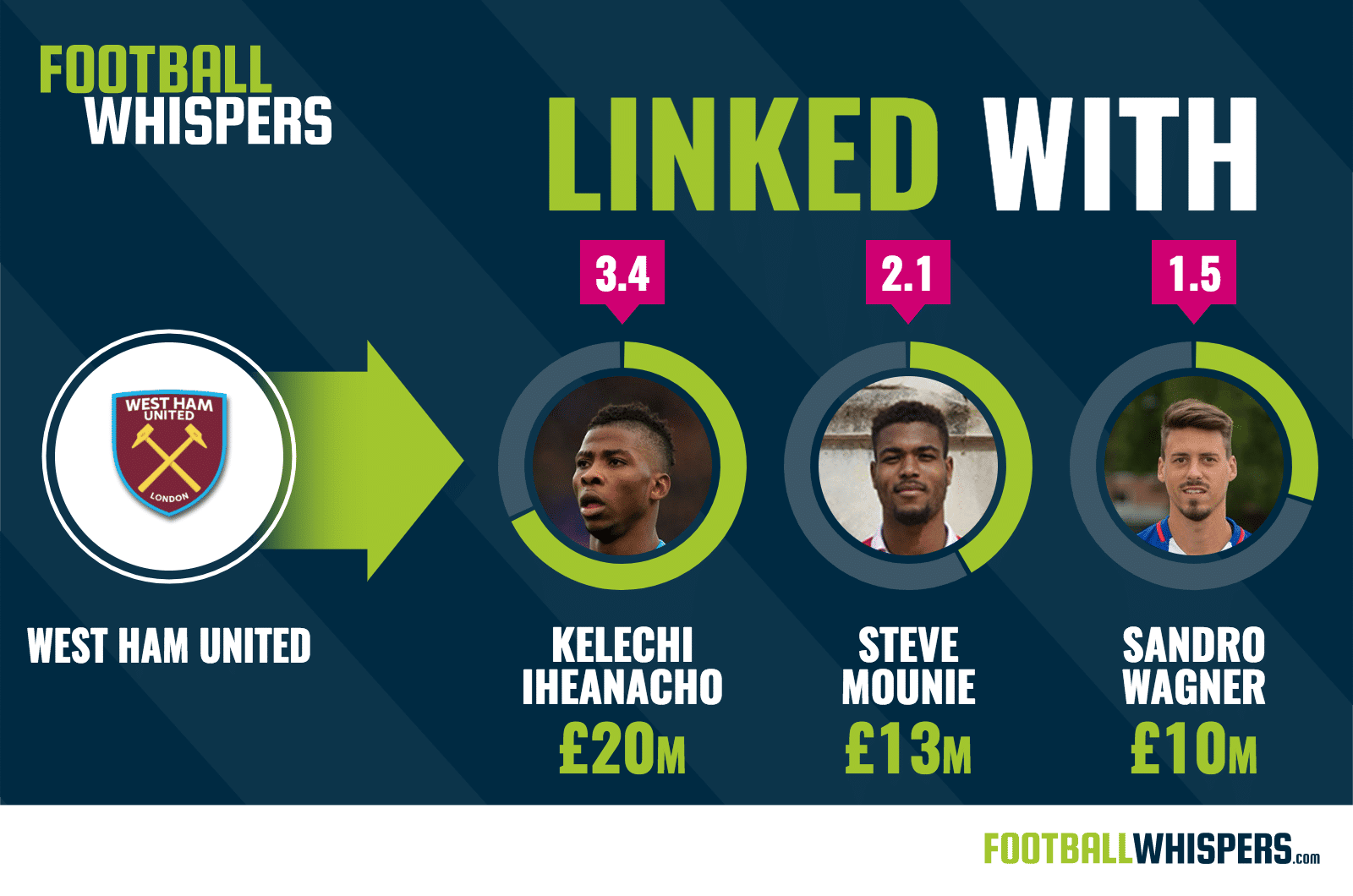 Mounié would represent a very achievable target, but is the youngster good enough to add to Bilic’s attack and provide the Hammers with the focal point they have been lacking? 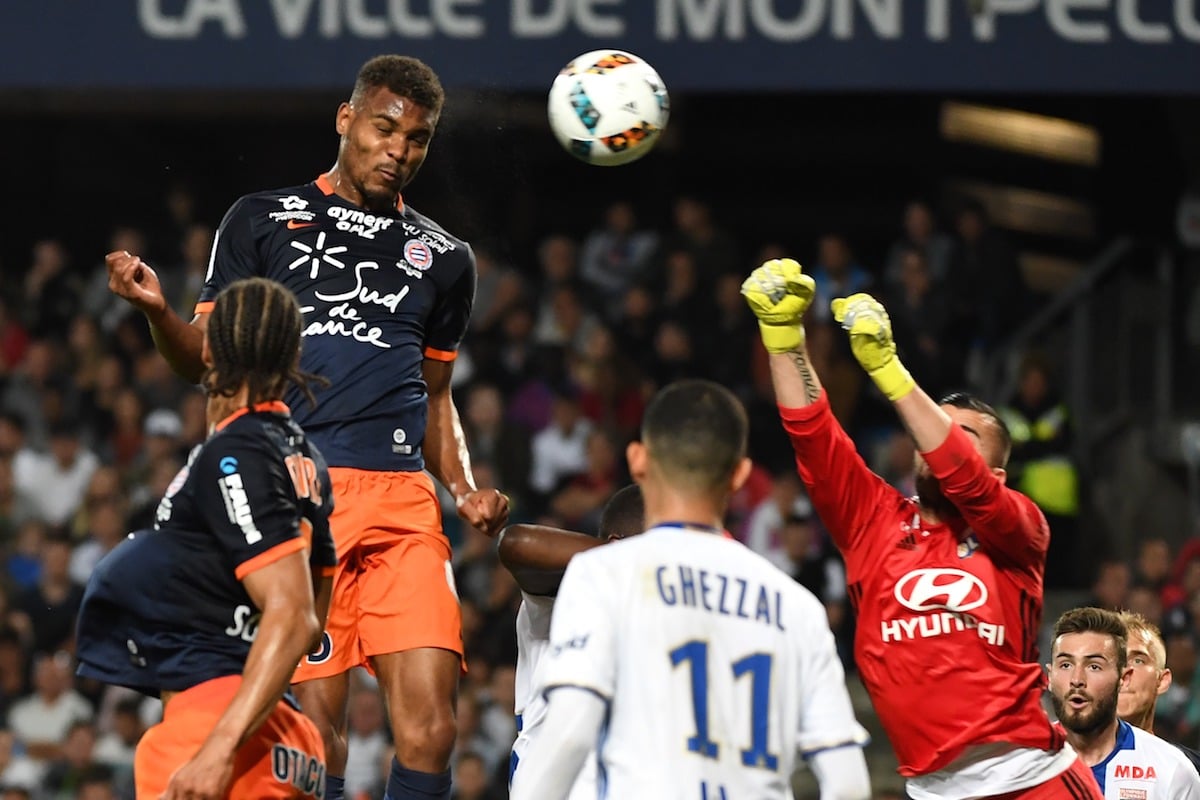 Born in Parakou, Benin, Mounié moved to France in 1998 and began his football career in Perpignan, playing for several local clubs.

Just 14 years old, Montpellier swooped to recruit him to their youth system, and helped him progress through the ranks. In 2012 the 17-year-old was stood at the Place de la Comédie, in the city centre, watching on a big screen as Montpellier sealed their first-ever Ligue 1 title. Two years' later, the forward's development was rewarded with a professional contract.

Injuries stopped him making a mark for the CFA side, who play in the fourth division, and that led to Mounié making a loan move to Nîmes Olympique for the 2015/16 campaign.

The move was a huge success, with the young attacker finishing with 11 goals and six assist in Ligue 2.

Ever since Olivier Giroud moved to Arsenal in 2012, Montpellier have been looking for a commanding presence to fill his boots and provide the club with a constant threat in the box. Mounié offers that and more.

Friends with fellow Benin forward, Rudy Gestede, he admitted in an interview with So Foot, that he hoped to follow in the Middlesbrough forward's footsteps.

“I talk with him a lot. He gives me a lot of advice, and I listen to him carefully because he's a guy I'd like to duplicate,” admits Mounié. “One day, my dream is to play in the Premier League.”

Despite his physical presence and aerial prowess, Giroud never scored a header as Montpellier charged towards the league title. Mounié has not had the same problem.

He’s not a lumbering target-man though, showing agility, athleticism and mobility to get in the right area, find that half yard of space to get his head on the ball. Of his 14 goals, six came with his head and the other eight with his right-foot.

Standing just under six foot two inches tall, the forward doesn’t limit his game to in and around the penalty area, he’ll come deep, start moves and then push forward to get into the danger area.

Playing away at Nancy, the ball is fed into Mounié. Rather than panic, the forward controls the ball, keeps his head up and waits until he can find Newcastle United target, Ryad Boudebouz out wide right. 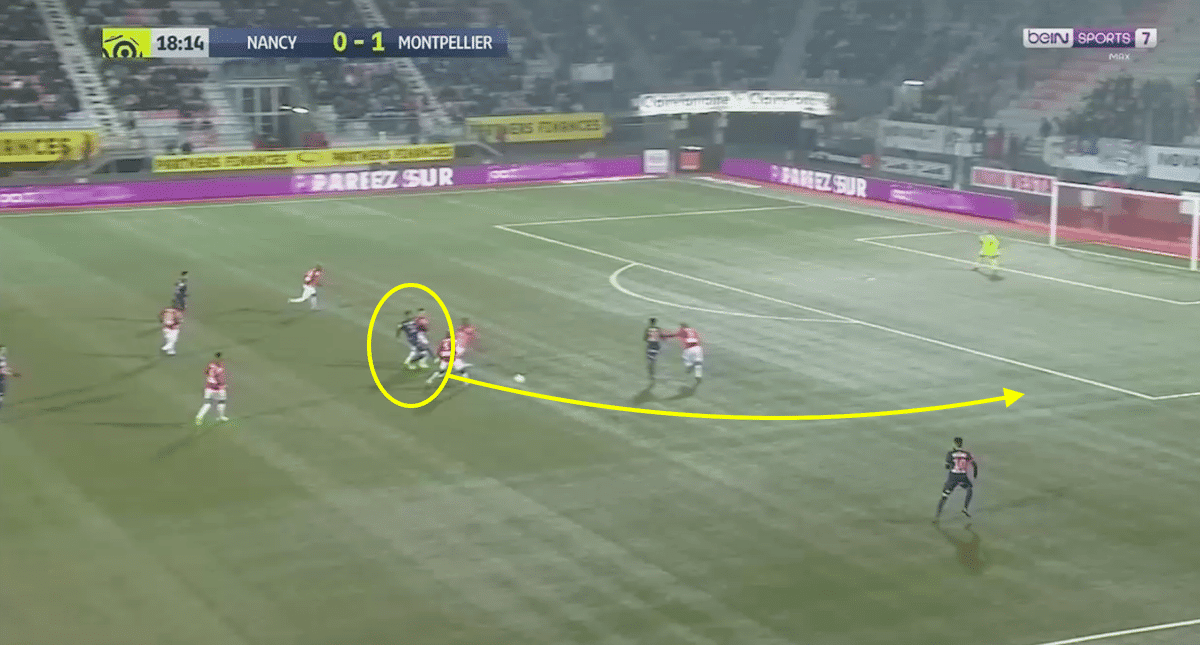 It helps when you can rely on one of the best passers of the ball about to fire in the cross, but Mounié does extremely well to continue his run, timing it so he is on the penalty spot to head in. 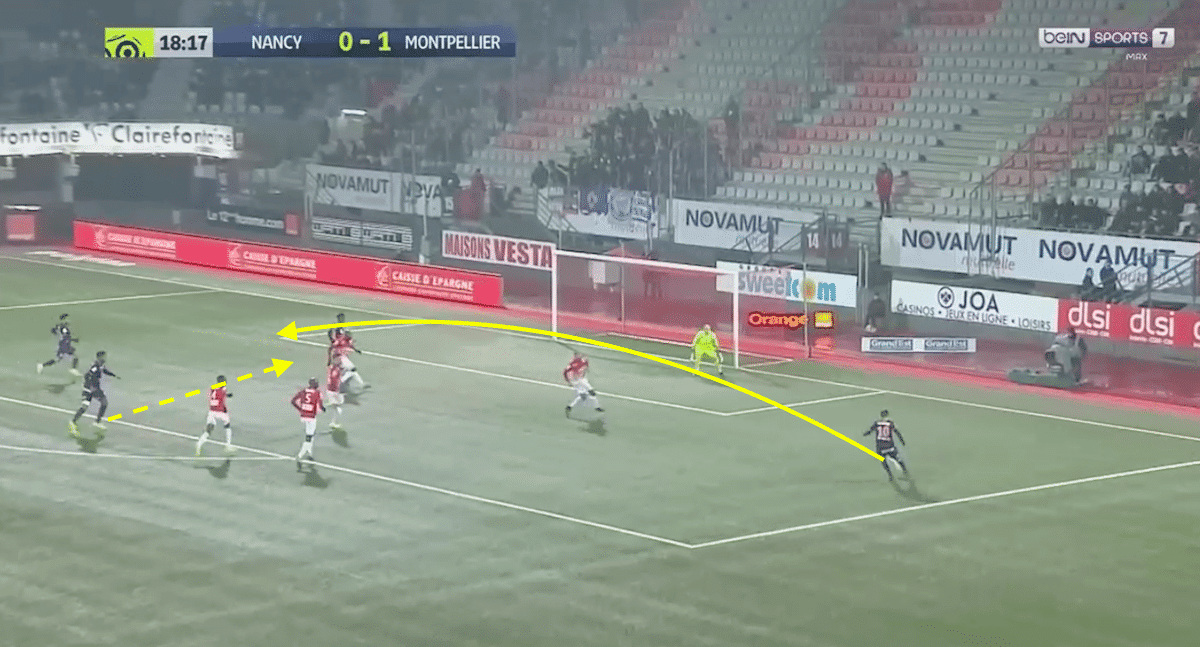 The striker has all the attributes you’d want for a tall centre-forward, but he is much more than that.

The 22-year-old uses his strength and speed to close down defenders and put pressure on the ball. He also has the speed and acceleration to get beyond a defence and provide a threat in behind.

Against Marseille at home, the ball is played into Mounié a good 40 yards from goal. This time, rather than hold it up, he is prepared to take the ball on the turn and knocks it past the last defender. 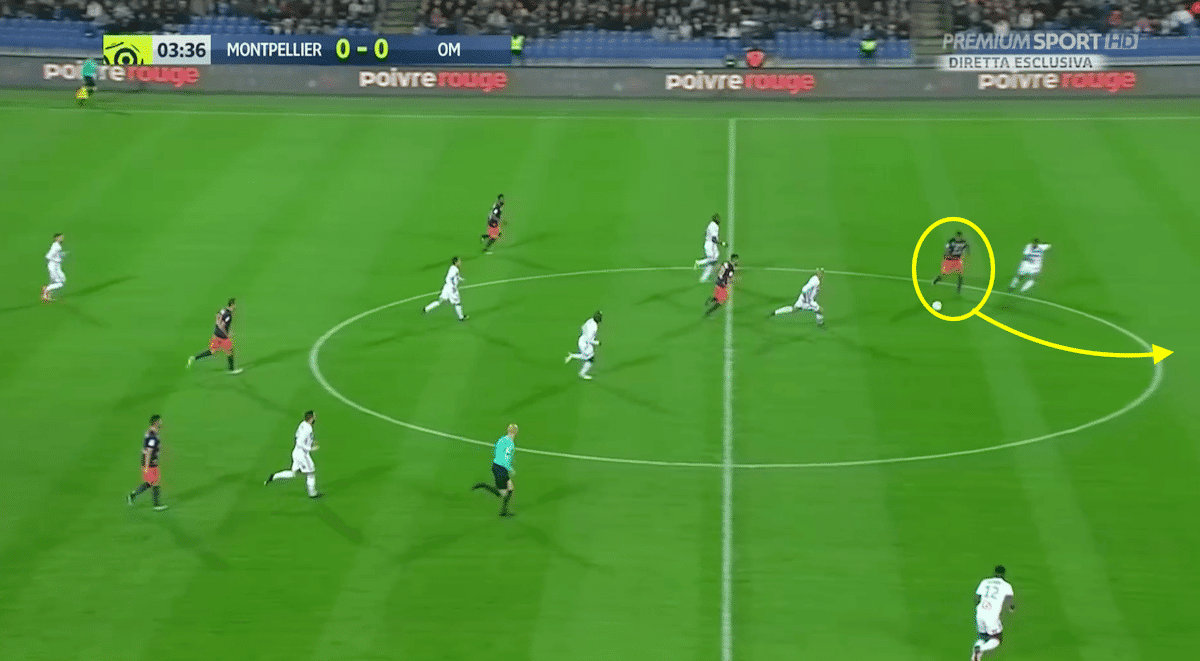 Within a couple of strides, the forward is powering towards goal, leaving the OM back-line to scramble back at full pace. Eventually they get close enough to attempt a tackle. 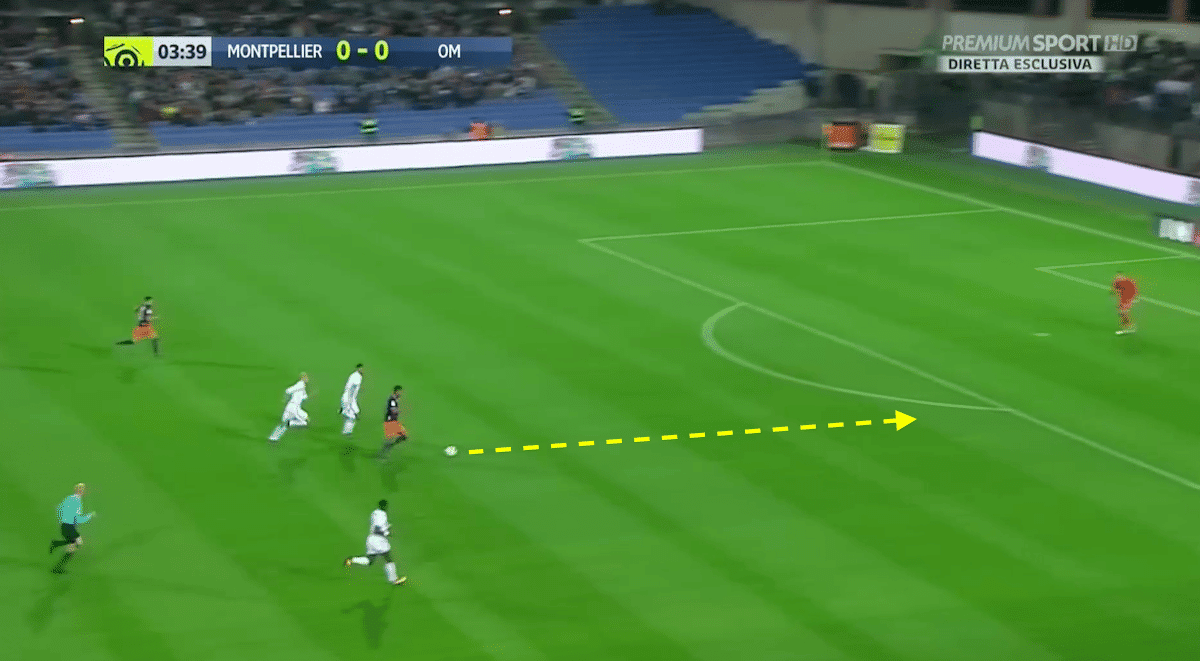 However, Mounié then uses his upper-body strength to get off the shot and although Yohan Pele makes the save, the Benin international got enough on the shot and Boudebouz is there to opening the scoring.

Adding someone who can play and be a threat both inside and outside the box giving you a real double option, plus when the ball goes wide, Mounié has the quickness over a couple of yard to get himself in front of his markers and he’s proven clinical in front of goal when asked to finish.

Mounié Compared to the Competition 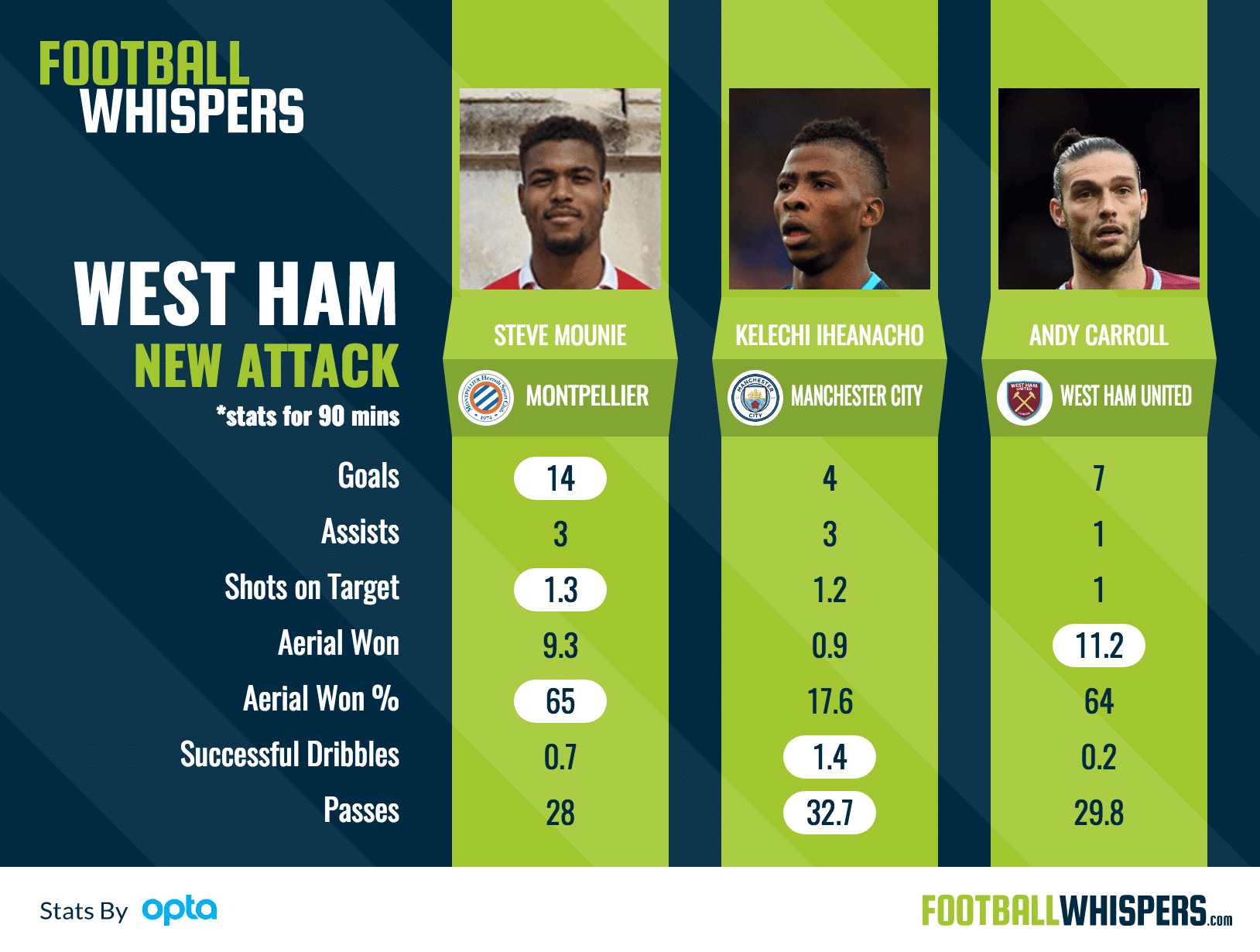 When you compare the statistics with Carroll and Iheanacho, you can see that the Montpellier man is somewhere in the middle.

The former England No.9 wins more headers, but Mounié dwarfs the Nigerian in this respect. He also takes fewer shots than the City striker, but gets more on target.

He’s more capable of beating players off the dribble than Carroll and isn’t far behind in terms of passes per 90 minutes and key passes.

West Ham already have players like André Ayew and Lanzini who could beat players to a similar level of Iheanacho, but they have no one who can do it all at the same time.

Mounié could play with Carroll or in place of him. He’s ideal for a team that plays balls into the box, like they do with the former Liverpool forward, but he can play on the break unlike Carroll and is fast and capable down the channel.

Bilic needs reinforcements up front, and rather than buy a couple of forwards, West Ham could kill two birds with one stone and pay the £13million that Montpellier want for their top scorer this summer.