It was on a cold February day at Manchester City's Etihad Campus that Pep Guardiola pulled Mikel Arteta into one of the club's screening rooms.

In hushed tones, the Catalan spoke rapidly at his assistant: “Yesterday I talked with Raheem (Sterling) and I must say, he’s such a good guy. I said, ‘Were you p***** off?’ He said, ‘Devastated’.

That scene was one of the standout moments of Amazon's documentary about the Premier League champions. It captured everything that makes Guardiola one of the world's greatest coaches; honesty, humility, focus, intensity, and an unwavering desire to want the best for and from his players.

That frank conversation – although in truth it was more a short stream of consciousness – also painted a picture of Sterling's character. The winger knew he had made a critical error, one that had cost City two points against Burnley. He knew Guardiola wanted better from him. And he was determined not to make the same mistake.

Guardiola, of course, has played a huge role. The Catalan coach, perhaps more than the majority of his peers, puts an emotional investment into every player he coaches.

When the former Barcelona coach arrived in Manchester in the summer of 2016, Sterling had just completed his first season at the Etihad following a £50million move from Liverpool.

The England international had struck six goals in the Premier League under Manuel Pellegrini, although three of them came in one game against Bournemouth. More was expected of the then 20-year-old.

Guardiola knew the potential Sterling had yet his evolution – and improvement – was slow. He struck only seven times in the top flight in the 2016/17 campaign.

“The first season he was scared. He was always thinking, ‘Who is the guy I am going to pass the ball to?' We spoke about that and said, ‘Try to score goals. If you have the feeling where the goal is, then go over there.'”

That man management, coupled with Guardiola's almost unrivalled tactical acumen, has seen Sterling flourish over the past 18 months. 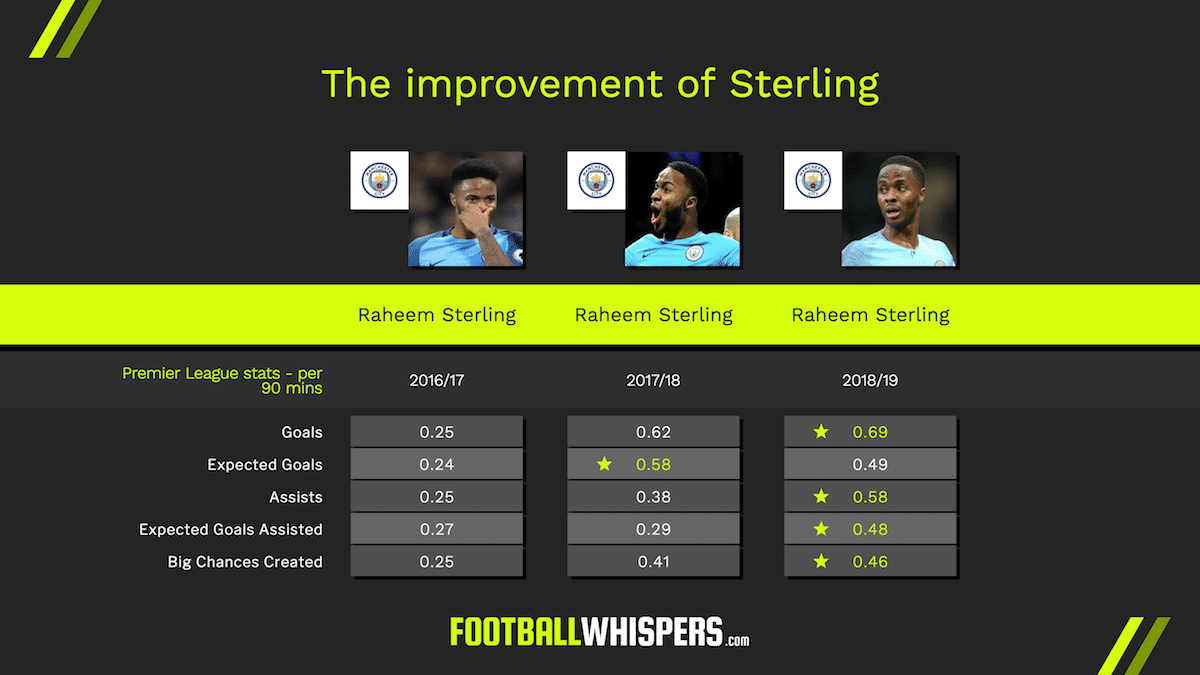 As the graphic above highlights, he has gone from strength to strength under Guardiola.

This term Sterling's output in terms of goals and assists per 90 minutes has more than doubled from the 2016/17 campaign. And that is reflected in his underlying numbers too, with his xG (expected goals) per 90 and xA (expected goals assisted) per 90 rising sharply over the past three seasons.

“I have the feeling he is now enjoying scoring goals and making assists,” Guardiola said after City's victory against Southampton. “He is more mature now than he was when we first met at the club. He believes more in himself.

“Hopefully, he can be more ambitious and think he can improve. He is 23 and he can be a better player.”

During Guardiola's first season at City Sterling was almost exclusively used on the right flank. He would hug the touchline and attempt to break behind defences to then supply cutbacks for the onrushing central midfielders.

Since the start of the 2017/18 campaign, however, his game has changed. No longer confined to the right flank – Kyle Walker's arrival from Tottenham Hotspur has played a big part in this – Sterling has become an excellent operator in the penalty area, often finishing off chances from within the six-yard box.

The below are Sterling's heat maps for his three seasons, including the current campaign, under Guardiola. As you can see, while he remains primarily stationed out wide, either on the right or left flank, he is now far more involved in central areas. 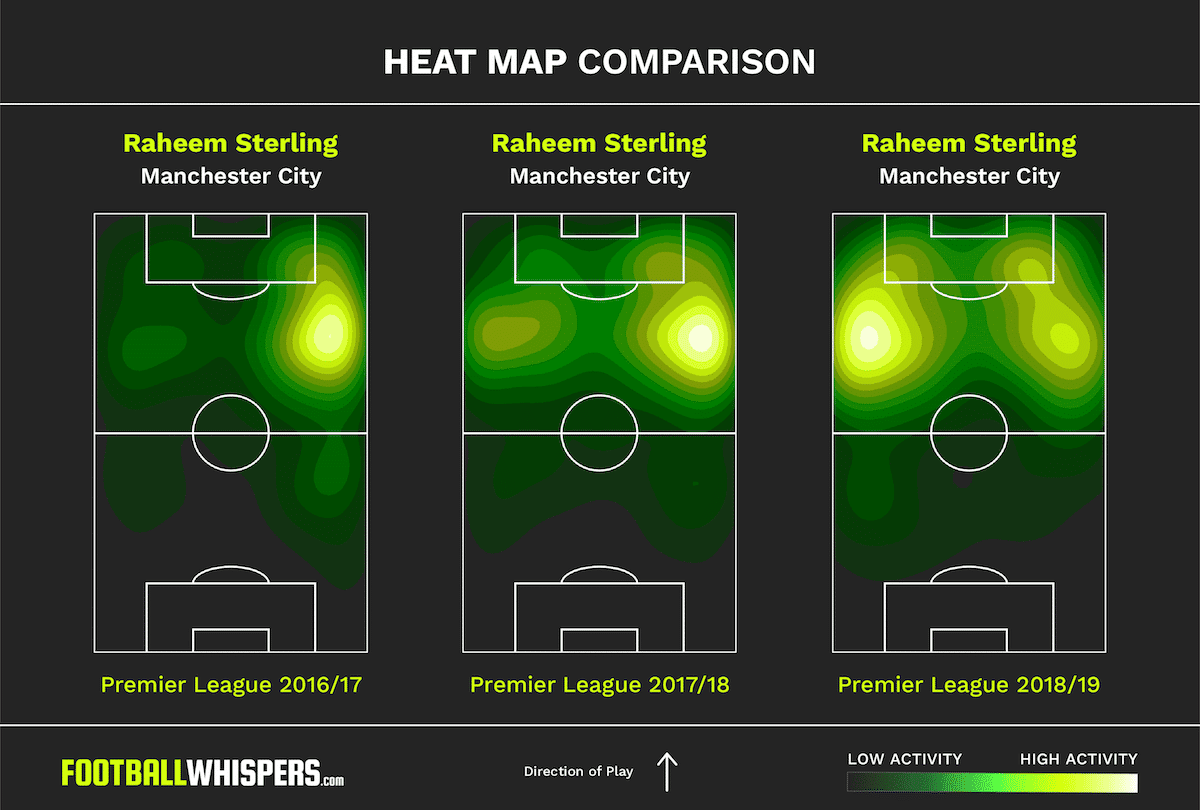 His importance to City has grown significantly and the club have recognised that; Sterling is poised to sign a new deal with the club worth a reported £300,000-a-week.

It will make him one of the Premier League's best-paid players and, over the last 18 months, that is what Sterling has become. But, perhaps the most exciting thing if you're a City fan, is the belief that the winger's full potential has yet to be harnessed.

“He is a top player but still is so young to be considered the world's best,” the Manchester City boss has admitted.

“He is in incredible form, he is sharp, fast, clever, fighting, decisive, he can play both sides and can play in the middle and receive the ball between the lines and commit the centre-backs with a lot of aggressiveness.

“But he can improve; still he loses simple balls. Like the Tottenham game, when he made an amazing assist in the first few minutes but then lost a lot of balls.”

And so we're back where we started, with Guardiola acknowledging Sterling's impact but challenging him to improve. Recent history suggests he will do just that.