There’s no doubt that Everton have big expectations.

Farhad Moshiri unquestionably wants the club to be competitive at the top of the Premier League.

Back in November, he told Talksport: “For our club to compete in the north west of England, which is the new Hollywood of football with [Pep] Guardiola, [José] Mourinho and [Jürgen] Klopp, we needed a star to stand on the touchline so we got [Ronald] Koeman.

“And we need a big stadium, there is no question about it. These are the three priorities we had.”

It sounded like the major shareholder in Everton had big plans for the club.

This summer may be a test of how he can try and kick the Toffees onto the next level, especially with Romelu Lukaku and Ross Barkley seemingly on their way out of Goodison Park.

But if Everton really want to properly compete at the top of England’s top flight, what they need to do is address the goalkeeping situation.

And Talksport is linking them with Stéphane Ruffier.

Who is Stéphane Ruffier?

The 30-year-old was born in Bayonne in 1986, and joined local club Aviron Bayonnais at the age of six, becoming a goalkeeper at the age of eight.

Ruffier helped the club's under-13 team win the Coupe de Pyrénées and the following season, he had an unsuccessful trial with Montpellier.

That wasn’t it for his professional career though and in August 2002, he signed a youth contract with Monaco after being spotted by scout Arnold Catalano, the same man who recommended Thierry Henry to the club.

After a loan spell back to Bayonne and some playing time for the club’s reserve team in the French fourth division, Ruffier became backup goalkeeper at Monaco behind Flavio Roma for the 2006/07 season, before finally making his debut in the 2007/08 campaign, coming off the bench against Metz, and finished with 12 appearances in all competitions.

He became the first-choice goalkeeper for the Monegasque side in 2008, but in 2011, following the club’s relegation to Ligue 2, he was linked with a move away and was subject of Manchester City transfer rumours.

The goalkeeper decided to stay in France though, and picked a move to Saint-Étienne as he thought the Premier League club would not offer him the first-team football he wanted.

Ruffier has gone on to make 277 appearances for ASSE, winning the French League Cup in the 2012/13, and has since added to two more games to his French international debut he experienced while at Monaco.

He played five full league terms without missing a game. That ended after he was injured this season after a 1-0 win over Guingamp. After 207 consecutive Ligue 1 appearances, he would miss seven fixtures.

His impressive form has made him an Arsenal and Everton transfer target.

Why do Everton need a goalkeeper?

Maarten Stekelenburg has never convinced in English football while the same can be said of Joel Robles.

Both were uninspiring acquisitions borne out of familiarity with the manager of the time as much as anything, with Stekelenburg already knowing Koeman and Robles being in favour with previous boss Roberto Martínez.

The need for a stopper of greater consistency is clear.

But is that Ruffier? 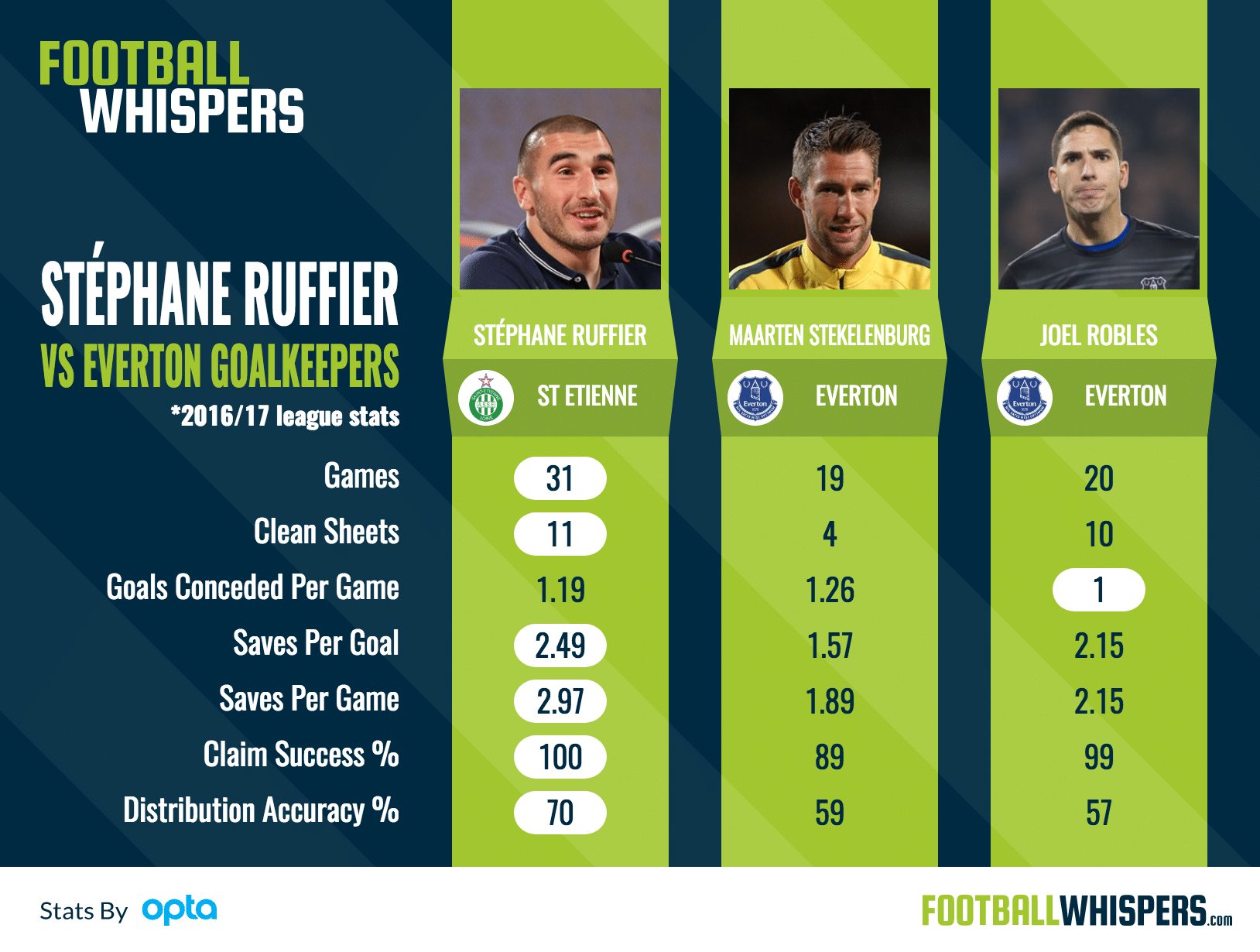 In the 2016/17 season, given he was first choice, while the Everton duo seemed to alternate often, it’s not surprise to see Ruffier have more clean sheets than either of them.

But actually Robles had the best ratio of clean sheets to game – keeping shut outs in 10 of his 20 games.

And Robles actually conceded the fewest goals per game – just one, while the Dutchman was at 1.26 and the Saint-Étienne ‘keeper was at 1.19.

But Ruffier came out on top elsewhere in a number of other categories.

Also, somewhat amazingly, he had a 100 per cent claim success rate, something which would really give confidence to the Everton defence should he move to Goodison Park.

If Arsenal are interested too, you would imagine Everton would actually have the upper hand over the Gunners.

That is because you would expect Ruffier to replace David Ospina as backup option to Petr Čech, whereas at Goodison Park, he would surely be an undoubted No.1.

But, he would of course need a bit of time to adapt, which famously goalkeepers in England don’t seem to get, with David de Gea almost being written off before he started.

And if he does arrive, it shows Everton fans that the club is looking at sorting out problem issues and could be starting to build a strong capable of finishing higher than seventh – although of course replacing Lukaku and Barkley well, if they do leave that is, would be vital.