It's unlikely Leicester City, or any side for that matter, will ever recapture the magic that drove them towards the most unlikely title triumph in football history in the 2015/16 season.

The Foxes are in better standing now than they were heading into that miraculous campaign, when they were among the favourites to be relegated to the Championship.

But the Premier League's traditional super-powers have re-established their dominance, making it nigh-on impossible for any new contenders to emerge from the chasing pack.

Jamie Vardy, too, the fairy-tale star of Leicester's title win, may never quite hit the heights that saw him set off on a record-breaking scoring streak and become an England international coveted by top clubs just years after playing at non-league level.

But the 31-year-old striker has proven his form in the 2015/16 campaign was no fluke by remaining one of the English top flight's most deadly marksmen. 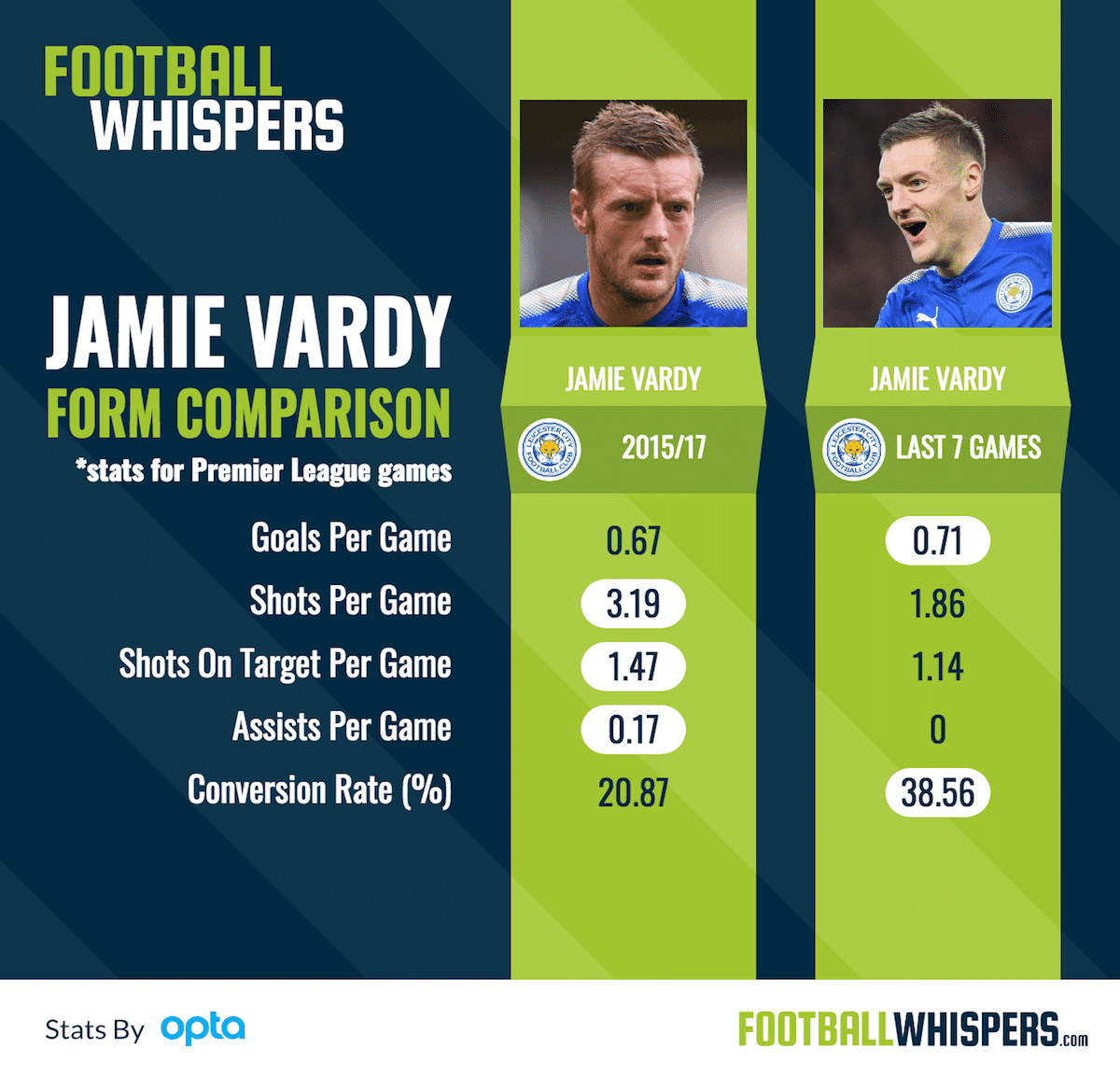 And, in recent weeks, the former Fleetwood Town forward has been scoring at a rate that exceeds his standout 2015/16 campaign. He is peaking just in time for the World Cup, stating his case for a starting berth in Gareth Southgate's side if Harry Kane is unable to fully recover from injury.

In his last seven league games, the King Power Stadium hero has found the net five times, a record which extends to seven goals from nine outings when factoring in FA Cup obligations.

While he is not peppering opponents' goals as regularly as he was during the title-winning season, owing largely to the fact Leicester aren't quite as well-equipped to service him as they were then, his efficiency has actually increased.

The England striker is now doing more with less, converting an incredible 38.56 per cent of the chances that fall his way on his current run of form.

While these numbers are unlikely to be sustainable across a long period, Vardy has consistently demonstrated an ability to provide a clinical touch when games are tight and chances at a premium.

Tottenham Hotspur star and accepted England No.9 Kane prescribes to an altogether different approach, relying on a high volume of shots to plunder his goals. It's why Vardy might just be the Three Lion's best bet at the World Cup, where Southgate's midfield will struggle to provide Kane with the sheer number of opportunities he enjoys at Spurs.

It remains more likely, however, the Leicester star will have to fit in alongside Kane, or else bide his time on the bench. Either way, his Leicester form merits an opportunity on football's grandest stage.