“If we're to win the cup we need to play better and make less mistakes at the back,” Celtic manager Brendan Rodgers said after his side's 3-2 Scottish Cup win over Partick Thistle on Saturday.

“It should have been less nervy. We started the game very well, good structure to our team, good positioning and ended up getting two goals.

“We were good going forward but behind we need to be better with and without the ball.”

The message was aimed at the entire Celtic side. But Jozo Šimunović would have known full well he was more culpable than the rest of his team-mates as Kris Doolan and Conor Sammon gave the visitors a lifeline in the second half.

For the first Šimunović, under no pressure whatsoever, attempted a lazy back-pass to Dorus de Vries, seemingly without looking or getting the required purchase on the ball. Doolan, on his 350th Thistle outing, nipped in and fired home.

Clearly not feeling he had not been charitable enough already, the 23-year-old allowed Sammon to out-muscle him, race onto a long ball forward and hook the under de Vries from just inside the penalty area.

Of greatest concern is the fact these are not Šimunović's first errors. He has been short of his imperious best this season.

In the end Celtic progressed with a hat-trick from the in-form James Forrest. But the scrappy nature of the was was symptomatic of the Bhoys' underwhelming season to date. Hopes of a second successive domestic treble are still alive, but the season has lacked the spark of Rodgers' first.

All of which is far from ideal with Zenit St Petersburg visiting Parkhead on Thursday when the Europa League resumes. The Russians, under former Manchester City manager Roberto Mancini, might be eight points off the summit in the Russian Premier League but will provide a far sterner test of the Bhoys' back four than Partick.

And yet the Scottish Premiership's tenth-best team scored twice against the champions without having to work particularly hard. That leaves Rodgers with a headache ahead of Zenit's visit: who will start at centre-back?

Former Manchester City youngster Boyata is sidelined until March with a groin problem while January signing Marvin Compper has yet to kick a ball for the Bhoys thanks to a calf problem which has plagued him since his move from RB Leipzig.

That leaves Rodgers with a straight choice of three from two; one of Kristoffer Ajer, Jack Hendry and Šimunović will miss out. It is not a situation Rodgers would have wanted to find himself in.

Ajer, for all his promise, is very raw at 19. However, the Norwegian has the composure and calmness in possession to enact the Ulsterman's game plan. Hendry, who only joined from Dundee last month, has never played in Europe. The experienced head in the three is Šimunović; he's also the player in the worst form of the trio.

That is something Bosnian's statistics underline, per WyScout. In terms of aerial duels, interceptions and defensive duels he is down on last season's numbers. 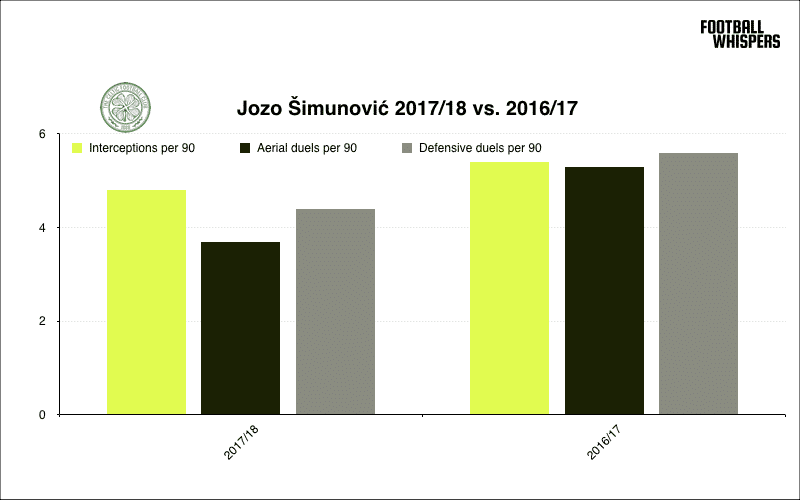 Interestingly, and in direct contradiction to what his horrific pass-back on Saturday might suggest, Šimunović has improved in possession – a big part of the game for defenders in Rodgers' team. He is averaging 73.6 passes per 90 this season, as opposed to 68.7 last term, completing 93.4 per cent versus 92.5 per cent.

Ajer, meanwhile, has seen his numbers from last season drop off but that can be explained by the fact he spent last term on loan at a Kilmarnock side who enjoyed much less possession than Celtic and, therefore, spent more of the game defending. 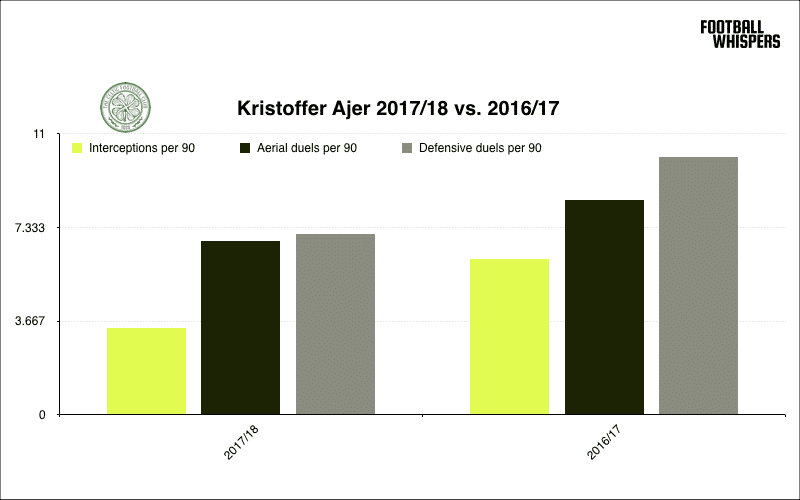 Ajer's impressive passing is aided by the fact he has spent time in midfield previously. The former Start defender, who was signed by Ronny Deila in 2016, however, sees his future in defence.

“From day one here the gaffer has been really clear that he sees me as a centre-half and I agree with that,” he told the Scottish Sun. I have always thought centre-half was the main position I wanted to play.

“In midfield everything is happening a bit quicker, so I felt that was more beneficial when I was younger, but now centre-half is my main position. Going away to get games in that position at Kilmarnock was just what I needed.”

It is clear Rodgers rates him and while Šimunović toils, he has complete faith in the Norwegian Under-21 international whose comfort receiving the ball and ability to move it quickly make him the perfect man to play in a his side – far more than Šimunović.

However, the former Dinamo Zagreb centre-half looks safe for now. With Boyata and Compper both injured, the alternative would be to drop midfielder Nir Bitton into the heart of defence. The Israeli was deployed their in the 7-1 thrashing at Paris Saint-Germain when Mikael Lustig went off injured. It is not an experience he will be keen to repeat.

While no PSG, Zenit pose a significant threat having bagged 17 goals in their Europa League group – more than any other team – and for that reason throwing Hendry in would be asking a lot of the 22-year-old with just a handful of top-flight appearances to his name.

Rodgers' faith in young players and those who can execute his gameplan is absolute, but progress in Europe is of paramount importance so Šimunović should get a reprieve. He must make the most of it.