A club-record fee will be required if Liverpool are to pry Alisson away from Roma this summer. Fresh off the back of Loris Karius' horror show in the Olimpiyskiy stadium, the Reds are once again being linked with a number of goalkeepers, but it's the Brazilian shot-stopper who tops the list of Liverpool transfer targets.

Paul Joyce of The Times recently claimed the Champions League finalists are in for the 25-year-old and that the mooted fee of £80million hasn't put the Merseyside club off, yet.

Roma are once again under pressure to comply with Financial Fair Play regulations and may be forced to cash in on the keeper. However, there's talk that they may impose a “Mohamed Salah tax” on Liverpool after seeing the Egyptian forward take his game to new heights at Anfield following on from his £39million move last summer.

Jürgen Klopp and the recruitment team on Merseyside have proven on a number of occasions now that money is no object if they deem the player integral to the club's progression.

The Reds parted with over £50million to sign Naby Keïta and a world-record £75million fee to finally convince Southampton into selling Virgil van Dijk, while Lyon are believed to want in the region of £60million to part ways with Nabil Fekir.

World-class goalkeepers are hard to find these days, which is why the likes of Alisson, Jan Oblak and David de Gea command such high fees. But, as shown time and time again, they're worth their weight in gold, and if the money is there then there are few ways in which it could be better spent.

It's clear that Alisson is one of the best in the world and he could be a difference-maker for Liverpool in high-profile matches, even if he didn't have the best of auditions at Anfield during the Champions League semi-final.

The former Internacional shot-stopper conceded seven goals across the two legs, with five of those coming at Anfield. On paper it looks like a bad day at the office, but, in reality, he made a host of key saves to keep Roma in the tie.

Both Karius and Alisson are young goalkeepers and both have played fewer than 200 club matches, with the latter only playing 64 games in Europe.

He's not an unknown quantity but at the same time he's far from the finished product, and that might be a reason the £80million fee puts a few clubs off him right now. He might lack experience but he's got the mentality of a more senior No.1, starting for his country on a regular basis.

And the stats this term paint a picture of a No.1 who can save a team 15 points throughout the season. 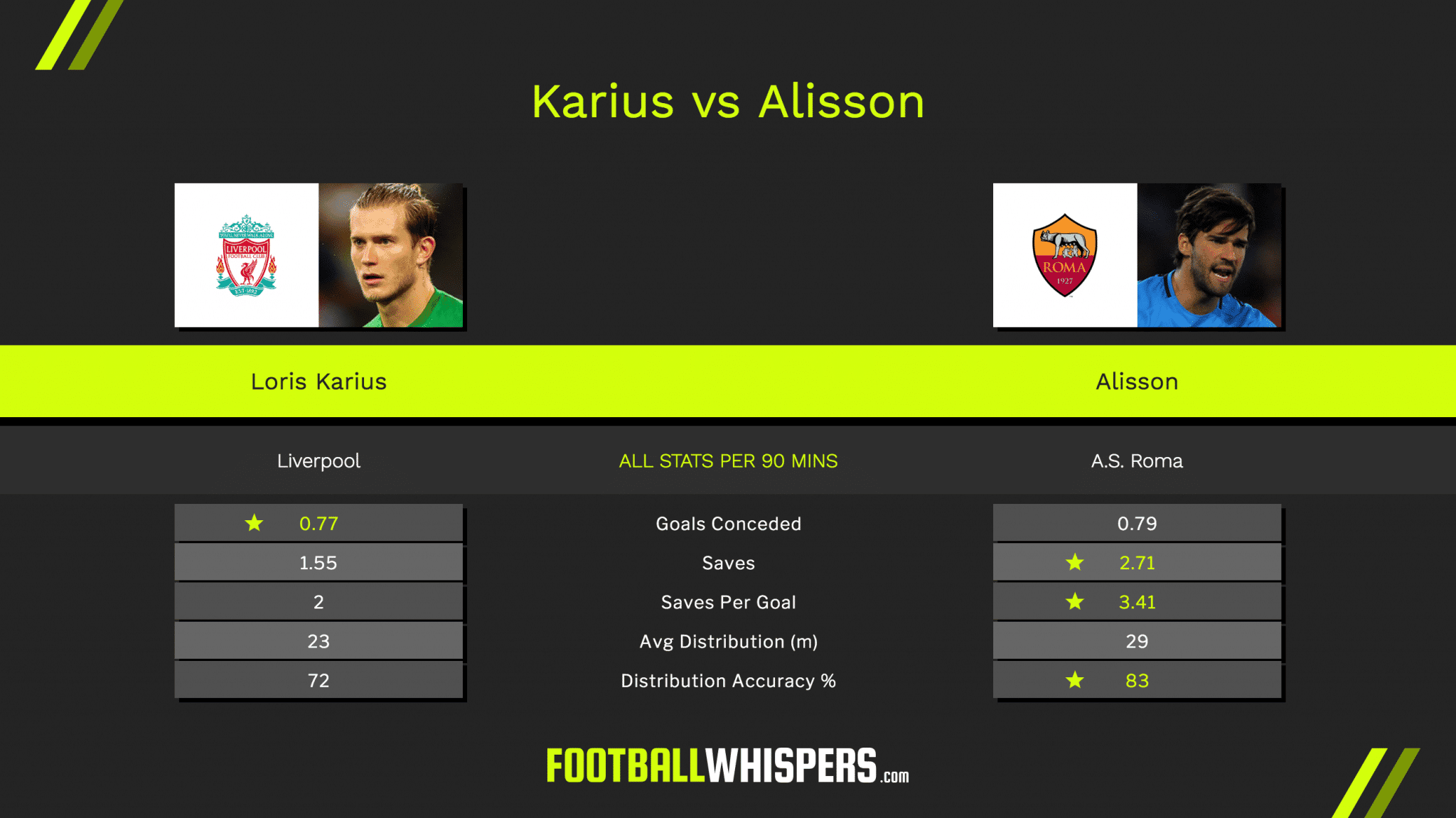 Now, goalkeeper stats aren't the best way to judge individuals because the numbers depend on a lot of factors beyond their control. Alisson might be, on average, making 3.41 saves per goal, 1.41 more than Karius, but it doesn't show what type of shots these are and where they're taken from.

Likewise, saves per 90 hinges on how good the defence is. For example, Liverpool allowed just 7.4 shots compared to Roma's 11.1; Alisson is busier purely because the team in front of him isn't as good defensively as Liverpool are.

However, expected goals against (xGA) quantifies the shots a team have conceded all season and gives them a value in terms of goals they would, all things being equal, ordinarily lead to. When the xGA is compared to the actual goals conceded, it helps understand which keepers are making a difference and which aren't.

Roma's xGA was 38.46 this season but they conceded just 28 goals. Across the top five leagues in Europe, only Manchester United and Burnley had a greater swing in goals conceded to xGA.

For context, Karius conceded 14 goals and his xGA was 13.47. He performed as expected, at least in the Premier League. He's not an elite keeper. Not yet, anyway, and it's not an area the Reds can be patient with if they want to compete at the top.

Again, it's worth remembering that the two shot-stoppers are playing in different leagues against different opponents, so it would be naive to suggest Alisson's form is transferable from Serie A to the Premier League, but the quality is there.

There's no guarantee the Roma man would adapt to the rigours of the Premier League, either. But if he did, Liverpool would have upgraded on a problem position which has plagued them for a number of years. If he were to keep goal At Anfield for the next decade then it would have been £80million well spent. The Reds need to be ruthless this summer in order to progress.