Napoli vs Salernitana Metz vs. Nice Crystal Palace vs Liverpool Arsenal vs Burnley Lyon vs Saint-Etienne

West Ham United nearly pulled off the mother of all Premier League upsets last Sunday when they travelled to take on Manchester City. With the worst defensive record in the league, they were expected to concede often against England’s top-scoring side, but they managed to restrict their esteemed hosts and took the lead before succumbing to a tight 2-1 defeat.

The result meant David Moyes has yet to win a single one of his four games in charge of the Hammers, but he will have been encouraged by the performance of his team. And, in terms of individuals, few rose to the occasion more than stand-in goalkeeper Adrián.

The Spaniard had been consigned to the bench following the arrival of Joe Hart on loan but, up against the England shot-stopper’s parent club, he was given his chance to shine. He took his opportunity, denying the likes of Raheem Sterling and Leroy Sané with some exceptional saves.

Aftewards, Adrián stated his intent to continue pushing for a regular starting berth. “Obviously, from a personal point of view I try to give my best every time I play,” he said. “The manager knows that I train hard every day, so I try to give him a headache for the next few games to fight for the number one position. This was my first game in the Premier League this season, and I have to keep working.”

His manager was open to the idea of him keeping his spot, saying: “If you get the jersey you hope you can retain it. You hope that if you play well you might get another chance. That’s football and I don’t think that’s changed.”

West Ham face another stiff test this weekend as they take on reigning Premier League champions Chelsea. But, with the performance of Adrián against Manchester City, Moyes now has a selection headache to solve as to who should be his goalkeeper on the day.

HOW ADRIAN AND HART COMPARE 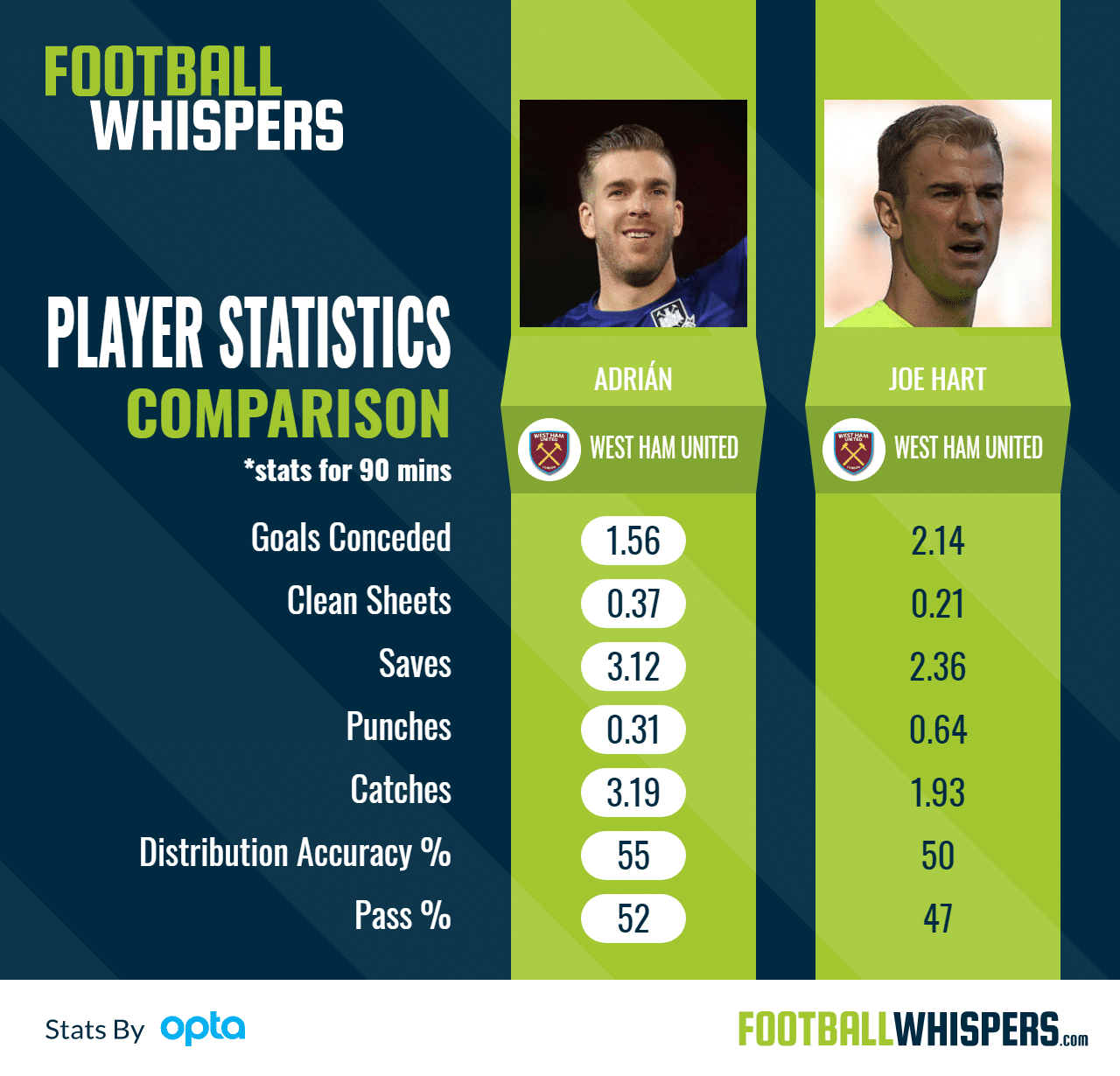 Pep Guardiola has always favoured goalkeepers who are capable of sweeping behind his high defensive line and comfortable involving themselves in possession to help give his team numerical superiority in build-up. It’s no coincidence that Victor Valdes and Manuel Neuer was so integral to his Barcelona and Bayern Munich sides.

It’s also no coincidence that Hart’s reputation has plummeted since the Catalan’s appointment as Manchester City boss. His possession game has come under increasing scrutiny ever since, and it hasn’t stood up well.

Last season’s loan spell with Torino only confirmed this as he made a series of avoidable errors, while his passing has been criticised during his time at West Ham so far. Tactically, it is entirely fair to suggest that he is a purely reactive goalkeeper, one who does the basics well but is not able to contribute beyond his own penalty box.

In this sense, Hart and Adrián are quite similar. Spanish ‘keepers have gained renown for their ball control and technique in recent years, but the Hammers’ man is more of an orthodox, old-school type whose game is based around his reflexes and decision-making.

This isn’t an issue for a team such as West Ham. They average just 48.1 per cent possession, showing that they do not tend to dominate the ball against their opposition. And when also considering the number of goals they have conceded and how deep their back line tends to operate, they need a quality shot-stopper more than a ball-playing sweeper-keeper at this point.

It isn’t possible to gain real insight into how Adrián and Hart compare based on this season’s statistics, as the former’s start against Manchester City was his first of this Premier League campaign. However, more understanding can be obtained when taking into account his numbers from 2016/17, where he played 16 league games.

Adrián conceded fewer goals per 90 minutes and averaged more clean sheets than Hart has done this term, though this could be down to a decline in team performance than any qualitative difference between the two individuals. The underlying stats, however, are ominous for the Englishman.

Hart has often been seen as a jittery goalkeeper. He isn’t afraid to command his box and tell team-mates where to be, but for some this merely masks a feeling of insecurity that tells in his occasional mistakes. This is perhaps evidenced statistically by the fact he makes fewer catches and punches the ball more often than his West Ham positional rival.

Adrián also appears to be a more accurate distributor in possession based on his performance in 2016/17, where he completed 52 per cent of his passes and achieved an overall distribution success rate of 55 per cent – both are higher than that achieved by Hart this season, and were obtained while also distributing over a longer distance on average.

The numbers appear to back up the notion that the Spaniard is the more composed of Moyes’ goalkeeping options, with and without the ball. And, with Adrián having also demonstrated his outstanding reflexes against Manchester City, he deserves to retain his starting berth against Chelsea this weekend.