When a player gets to 35, you would expect some questions over their future.

They’re undoubtedly reaching the end of their career, although goalkeepers like Petr Čech can last a lot longer.

The Arsenal keeper could argue he still has at least five years ahead of him.

In fact, the oldest eight players in Premier League history were goalkeepers, with John Burridge featuring for Manchester City in a 3-2 loss to Queens Park Rangers, aged 43 years, five months and 11 days in May 1995.

He may not have been at the top of his game, but Edwin van der Sar was still at one of the world’s biggest clubs when he made his last appearance for Manchester United in May 2011, aged 40 years, six months and 23 days.

Of course, Čech is considerably younger than both of them, but he is the second-oldest goalie in the Premier League to have played this season – behind Watford’s Heurelho Gomes.

Has Čech had the desired effect at Arsenal?

There’s no doubt to even the casual observer that Čech isn’t the goalkeeper he was before the clash with Stephen Hunt at Reading in 2006 that left him with a fractured skull.

Truth be told, he is probably lucky to be alive, let alone still playing football at one of England’s biggest clubs.

If he was at the level he was before that collision, Chelsea probably wouldn’t have replaced him with Thibaut Courtois, but that doesn’t mean he isn’t still a very good keeper.

When he signed for Arsenal, then-Chelsea captain John Terry hailed him, saying: “He will save them 12 or 15 points a season.

“Petr was an unbelievable professional last year. When you get left out of the team it can be hard to accept but when he came in he was exceptional.”

Yet, whether that is actually the case or not is up for question.

The season before his arrival, 2014/15, saw Arsenal finish third with 75 points. Čech’s first campaign at the Emirates did see an upturn for the Gunners, finishing second, albeit with a lower points tally of 71.

But 2016/17 led to Arsène Wenger’s side falling out of the top four, with 75 points and a fifth-placed finish.

Perhaps they just got worse, and without Čech, they could have been lower down the table. Unlike what Terry predicted, he didn’t help them to any more points though.

Although keepers can go on until they're 40, you would expect them to perhaps lose a bit of what they once had, or for their game to change slightly.

If you look at Čech’s stats over his time at Arsenal, it could be suggested he is on the decline. considering goals conceded and saves per goal – both big factors to take into account for goalkeepers. 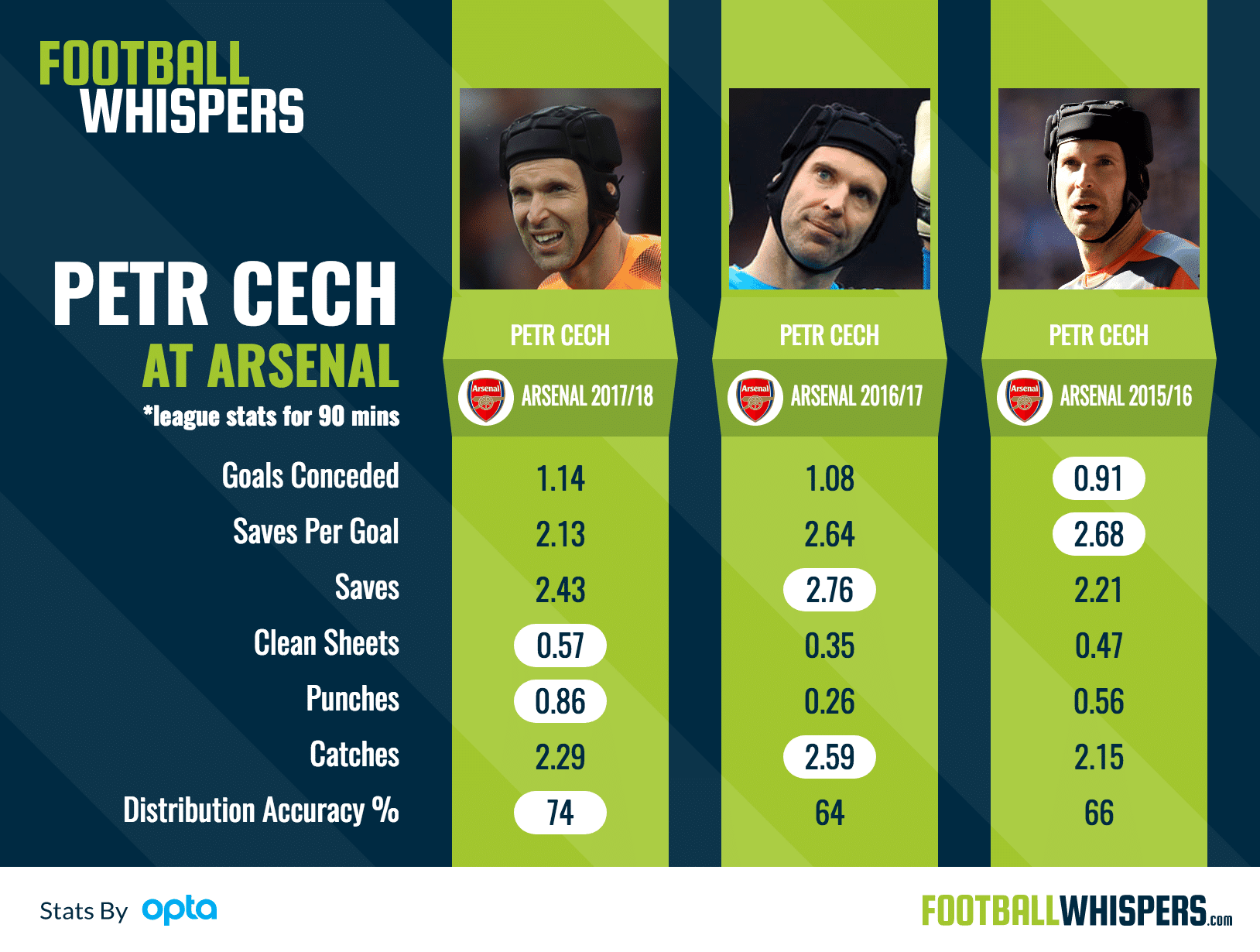 If you also compare them to his last season at Chelsea – 2013/14 – his goals conceded per 90 minutes and saves per goal are considerably worse off.

The Blues legend conceded 0.3 goals per 90 minutes and made seven saves per goal in his final year at Stamford Bridge.

The statistics may be slightly skewed by the collapse at Liverpool though – Čech’s clean sheets ratio is actually at the highest – 0.57 per 90 minutes. It was just 0.35 last season.

Interestingly, this season, his distribution is also much better. Čech has never been known for his passing, but 74 per cent of his efforts find their target.

Out of the keepers who’ve played in more than five of the seven Premier League matches this season, only Ederson at Manchester City and Hugo Lloris at Tottenham Hotspur can better that – with 85 per cent and 77 per cent each.

Time for a replacement?

But of course the goals conceded and saves per goal would be a worry. If those levels continue on the decline they are at the moment, it may be time for Wenger to look at finding a replacement.

It doesn’t have to be urgent, as Čech is undoubtedly still a top keeper, but he is no longer in the elite level he was once considered part of.

Perhaps fittingly, he is a keeper for a top-six side, which is what Arsenal are at the moment, competing in the Europa League rather than the Champions League.

Yet, with Arsenal unbeaten in seven games Čech claims they are title contenders.

“We have joined the group of leaders – that is important,” said the goalie.

“We have responded well to the disappointing defeat at Liverpool.

“Everybody has been doing their job and the positive results have given us the confidence we need. As a team, the cohesion is there.

“The defensive attitude, the offensive work as well. This is the way to go forward.”

Čech may have the winning mentality to go with them, and while this may be vital in the dressing room, if he helps return the Gunners to becoming a contender in English football, he may find himself replaced sooner rather than later by a younger model, just like he was at Chelsea with Thibaut Courtois.

It won't be music to the keeper's ears that with the impressive young French star Alban Lafont has been subject of Arsenal transfer rumours.