Hot on the heels of wrapping up the signing of Alexis Sánchez from Arsenal last week, Manchester United announced that manager José Mourinho has penned a new contract with the club, keeping him in charge at Old Trafford until at least 2020.

The Portuguese tactician isn't everybody's cup of tea, with his press-room baiting and perceived in-game negativity unsavoury to some. But there can be no doubt about the former Real Madrid and Inter Milan boss' track record of success.

Having taken the reins on the red side of Manchester in the summer of 2016, Mourinho has overseen some turbulence, finishing sixth in the Premier League last season and often underperforming when up against direct rivals. But he has also delivered silverware, the premier currency at the Theatre of Dreams.

After three years of regression following Sir Alex Ferguson's retirement, Mourinho appears to have United moving in the right direction. They trail Manchester City by 12 points in the race for the Premier League title, but both aesthetically and in terms of results, the Portuguese has improved upon the work of predecessors David Moyes and Louis van Gaal.

Moyes, now in charge of West Ham United, struggled to adapt to the expectations at one of the world's biggest clubs and was sacked in April of his only season in charge.

Van Gaal boasted a CV comparable to Mourinho's and a reputation as one of the modern game's most influential coaches. But his possession-heavy, low-tempo approach was anathema to the United faithful, who longed for a return to the swashbuckling wingplay often espoused by Ferguson.

Mourinho, of course, is no great entertainer when in comes his tactics, but any regular viewer of the Red Devils will attest that his side are much easier on the eye than van Gaal's, even if they can still frustrate. 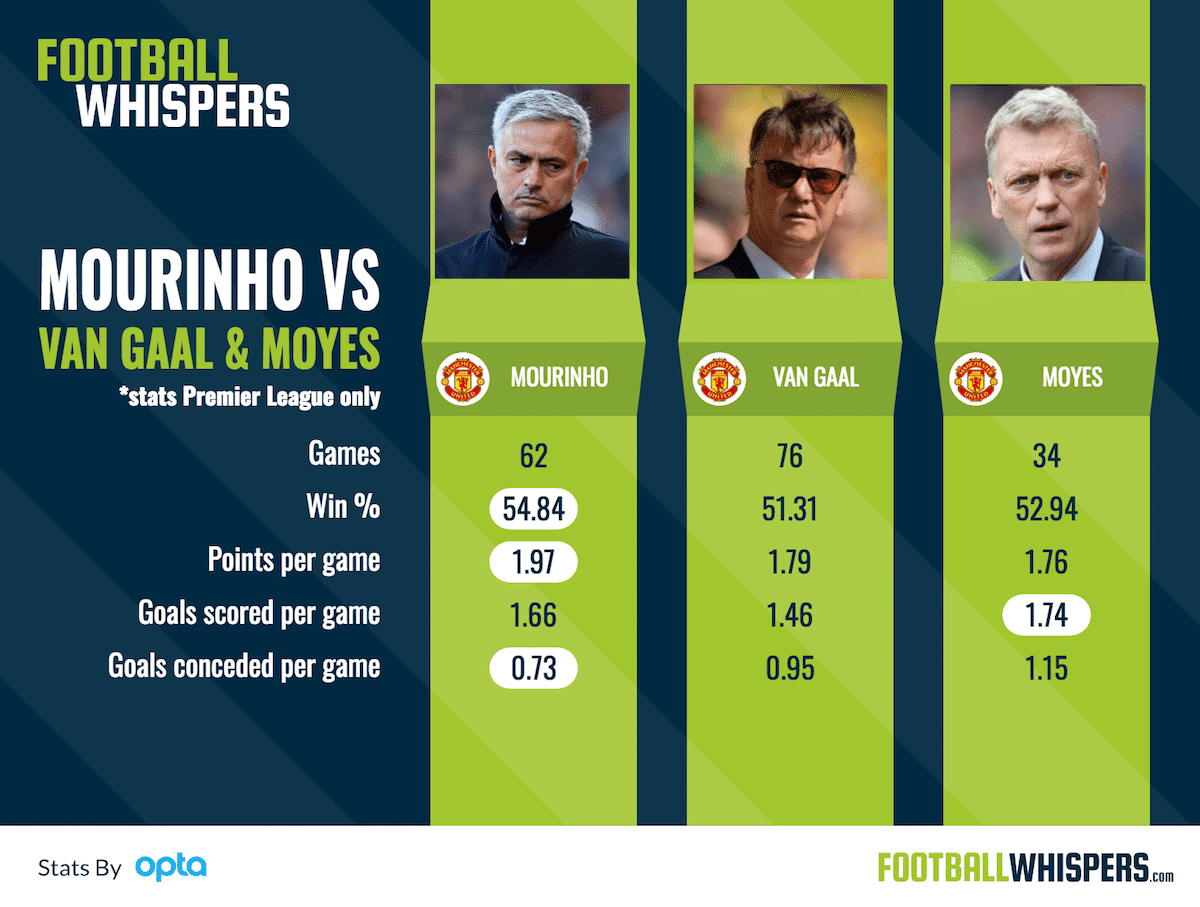 As the above graphic shows, progress is being made under Mourinho. It may be coming at a slower rate than expected upon his appointment, but, with a better win percentage, points-per-game average and defensive record than both Moyes and Van Gaal, United were wise to tie down the two-time Champions League winner, giving him the platform to continue the growth he has fostered thus far.