Sadio Mané has been the forgotten musketeer at times this season. Injury and suspension seemingly stalled his start to the new campaign but, unlike last year, Liverpool didn't stand still and were able to move on without him.

Mohamed Salah's start to life on Merseyside threatened to steal the spotlight away from him initially, with the Senegalese speedster moving to the left flank to accommodate the club's, at the time, record buy.

But Mané did kick the season off in good shape, scoring three goals in his first three Premier League matches as well as grabbing an assist in the 4-2 win over Hoffenheim in the Champions League.

He was sent off against Manchester City and then picked up an injury while away on international duty. It was during this time that Jürgen Klopp reintroduced Philippe Coutinho into the starting XI and the Brazilian maestro wasted no time showing the world exactly why Barcelona were prepared to part with over £100million to secure his services.

The former Liverpool No.10 was involved in 20 goals in just under 1,500 minutes before his move to Barça in January. When a player is in that type of form it's easy for others to get overlooked.

The third musketeer is Roberto Firmino. The Brazilian attacker is now considered to be one of the most complete strikers in Europe after increasing his offensive output this season. He's been involved in 32 goals in all competitions and has already surpassed his previous best of 11 strikes in the Premier League. We're still in February.

While there have been plenty of Firmino masterclasses, Salah clinics and Coutinho magic shows, it's been evident that there's been a lack of Mané madness this season.

Fans are yet to see the Liverpool No.19 terrorise the opposition like he did last season. On the surface he's looked like a man short of confidence. Moments of brilliance have been at a premium and are being downplayed at times because he's been stale for the other 89 minutes and 50 seconds of the match.

The general consensus has been that the £35million 2016 summer signing has been disappointing this time around. But the numbers say otherwise.

“An enigma wrapped in a paradox and shrouded in a conundrum”

Mané isn't posting numbers similar to those of Coutinho, Firmino or Salah, and because of that he's “underperforming”. But it's when you compare his stats this season to those last term, during his debut campaign on Merseyside when he impressed so many, you see the bigger picture. 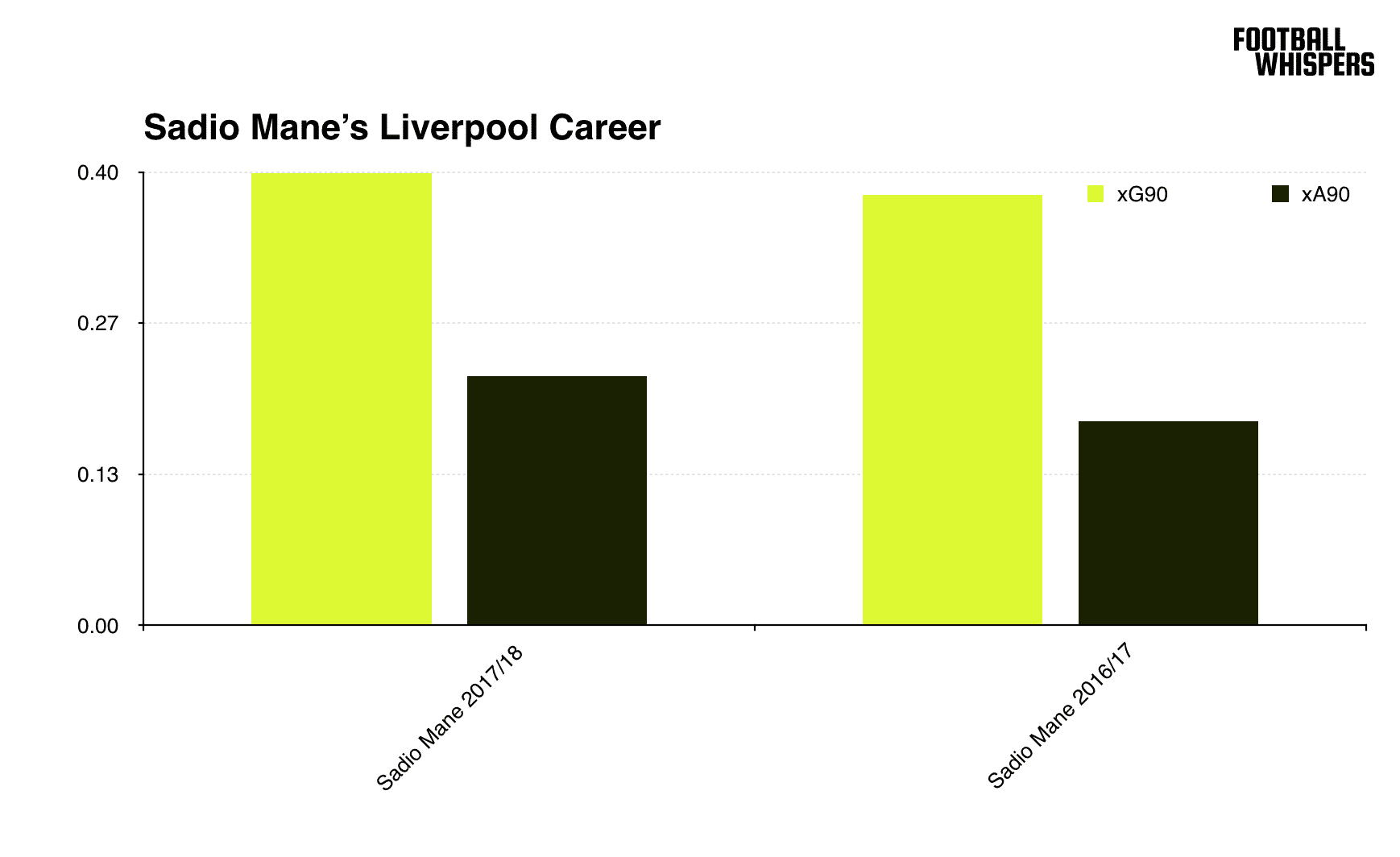 The graphic above shows Mané's expected goals per 90 minutes (xG90) and expected assists per 90 minutes (xA90) stats for the past two seasons. There's not a great difference between the two but his total score is 0.06 better so far this campaign than it was last season.

He's also already matched his tally of 18 goal involvements from last season; he's now involved in a goal every 102 minutes, down from 124 during his debut year on Merseyside.

The six goals in the Champions League have helped his cause but that's a sign of his class as opposed to a stick to beat him with. It's not his fault the Reds didn't have European football during the 2016/17 campaign.

Mané's overall performances may be lacking, and he will need to step it up, but a sign of a top class player is when they manage to influence the game despite being on the peripheral throughout. That's exactly what he has been doing.

Mané has been chipping away and, for the most part, it's gone unnoticed.

Salah scored twice against West Ham United in the 4-1 win. Mané assisted both goals after superb solo runs. His back-heel into the path of the Liverpool No.11 also resulted in the Reds netting the equaliser against Leicester City at Anfield.

Coutinho lashed the ball home against Spartak Moscow to restore parity in Russia after playing a neat one-two with the Senegal international. Firmino's outrageous goal against Huddersfield Town starts with a deft Mané touch into the Brazilian's path.

Mané might not be the star attraction, but the Reds already have two of those in Firmino and Salah. The former Southampton man is playing the part of a supporting role brilliantly; he's almost the facilitator now, something the Liverpool No.9 was described as last season.

Mané is a key cog in the Klopp's system. He's underperformed from an individual point of view but he still has more goals and assists than anybody in the team after Salah and Firmino.

He's not as good as the dynamic duo in attack, but that doesn't make him bad. At the end of the day, Mané is judged on his offensive output and his work rate. He's ticking both boxes for the Liverpool manager.

The show Mané put on against Porto was completely devastating, and knowing he has the ability to step it up to that level is frightening. Fans of the Merseyside club don't fully appreciate the luxury position they find themselves in heading into the business end of the season.