This Saturday afternoon, Everton will welcome Tottenham Hotspur to Goodison Park in a clash of teams looking to establish themselves among the Premier League’s finest.

Ronald Koeman’s men will be boosted by the presence of a former Spurs player, Gylfi Sigurðsson, who may be motivated to prove a point against his old employers.

After years enchanting the Swansea City faithful with his creativity, the Icelandic star is finally competing at the level his individual quality deserves. He now has a chance to win silverware and play in Europe on a regular basis.

Tottenham will have to keep a close eye on Sigurðsson as he looks to show they were wrong to let him go. Since he departed the club in 2014 he has improved significantly, something that can be highlighted statistically.

Comparing his displays for Swansea last term to his performances in his final campaign with Spurs, the 27-year-old posted higher numbers in most categories. 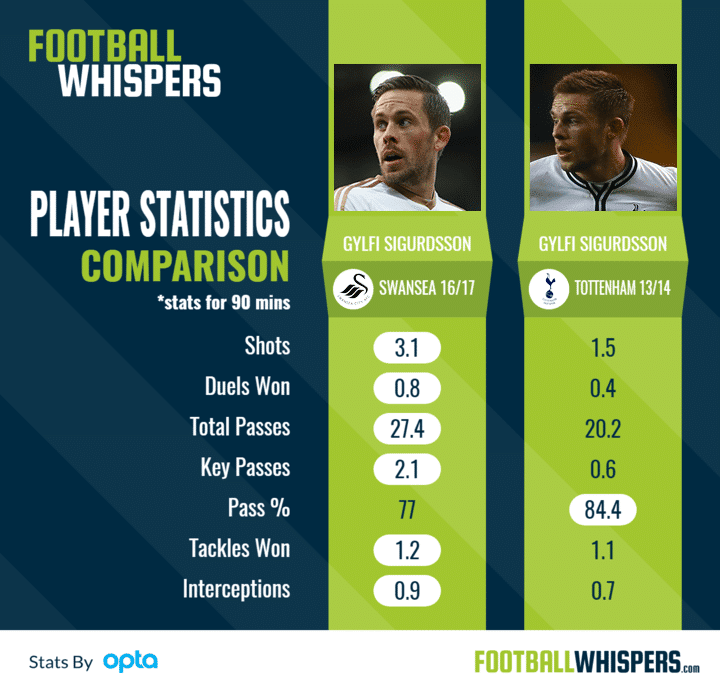 Defensively, he contributed more tackles and interceptions per game. And in possession he completed more passes, albeit at a lower success percentage, while creating almost three times as many chances on average.

If Everton are to win this Saturday they will be hoping their new playmaker can show precisely how much he has improved since leaving Tottenham.