No goals in six Premier League away games isn’t ideal. It’s been a pretty disastrous start to the season from Crystal Palace.

They’ve lost nine of their opening 13 league games this season, winning just twice, and sit bottom of the Premier League.

They’re yet to win on the road, or even pick up a point. That’s not the record you want going into the first top-flight game at your rivals for 36 years.

Yet that is exactly the case as they face Brighton and Hove Albion on Tuesday night, the first meeting between the two since the Eagles travelled to the South Coast in the Championship play-offs to earn a place in the final in May 2013.

Seagulls fans will be wary of the threat Palace face, despite their lack of a Premier League away goal this season, and they know the visitors will be up for it even more than usual with it being a match between two rivals.

A lack of goal threat away from home?

Despite Palace’s failure to score away from Selhurst Park in the league this season, that doesn’t mean they haven’t deserved a goal.

In fact, their expected goals (xG) value is at 4.99, higher than six other teams, including Bournemouth, who have scored four times, and Burnley, who have found the back of the net on seven occasions.

That means the quality of the chances they have created should have seen them score more or less five goals this season, yet they’ve come away from each match empty handed.

Eventually that bad luck has to run out, surely.

If you look at Brighton at home and the quality of chances created against them, their expected goals against (xGA) is 7.69, compared to the seven goals they’ve let in at the Amex.

That’s more or less the same, saying that on average, teams against Brighton fashion enough chances to score once against them, despite the impressive Shane Duffy and Lewis Dunk centre-back partnership.

That’s got to give Roy Hodgson and his side hope that they can find the net on Tuesday night.

Zaha: The answer to their scoring woes?

For much of this season, Palace have ended up playing without a recognised striker, despite Hodgson using his preferred 4-4-2 formation.

Christian Benteke and Connor Wickham have been missing through injury, meaning Wilfried Zaha and Andros Townsend have become the preferred forward pair up front.

And the Ivory Coast international, more traditionally a winger, has thrived in the role.

He leads Palace’s goalscoring charts with three, but perhaps more tellingly, he has the highest xG of any Eagles player this season – 2.55.

That also shows that he's taking his chances, with more goals than he should theoretically have based on xG.

By contrast, Townsend, who’s played alongside him, has an xG of just 0.86.

It should be pointed out that the tables are turned though in terms of expected assists (xA), which measures the quality of the chances created by a player.

Zaha’s xA is 0.78, while Townsend’s is 2.24, the highest of any Palace player – it’s showing how they’re working well as a partnership, with the former Tottenham Hotspur man turning the provider. 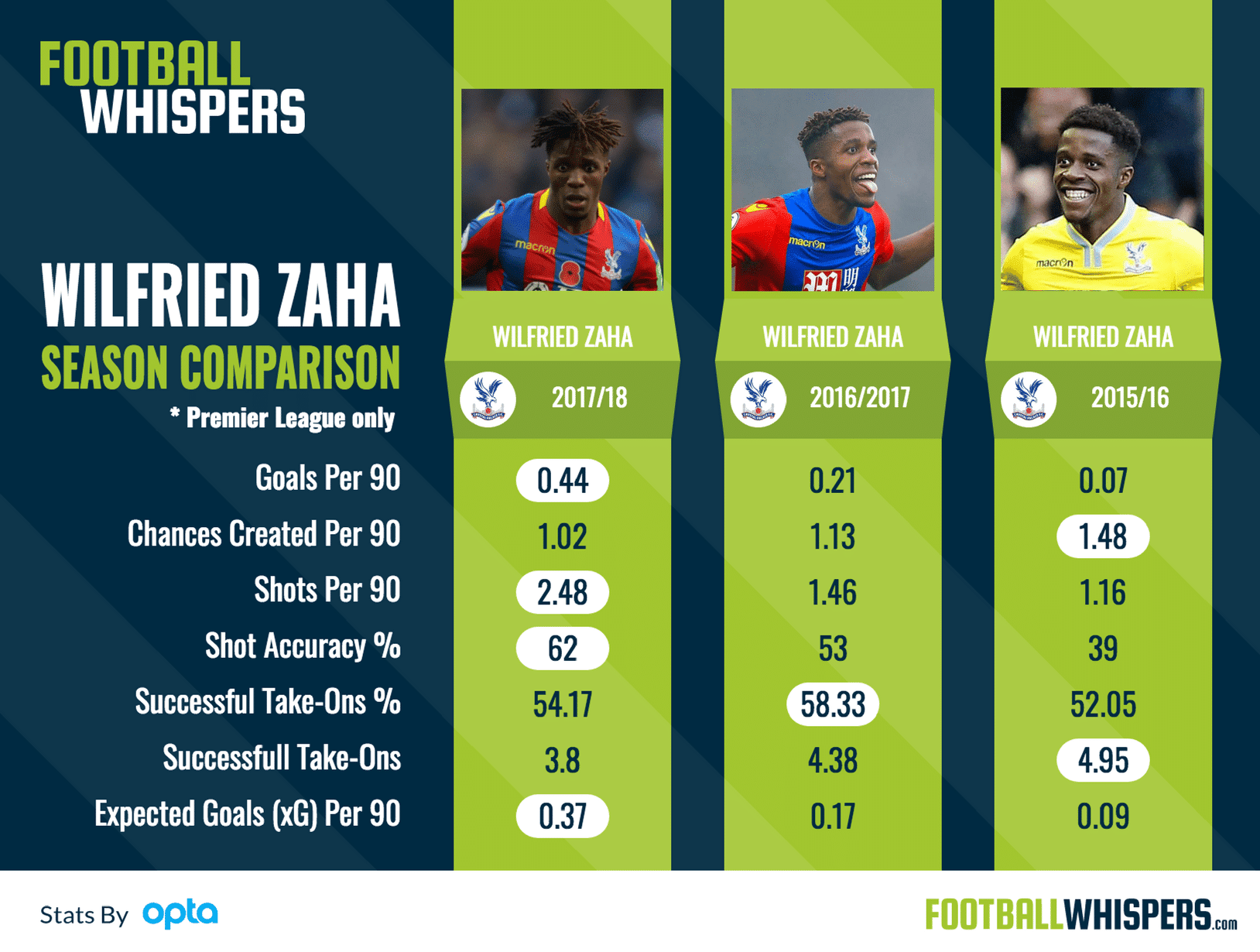 Now the Eagles main man, Zaha is thriving up front and has been the man to come out and address the importance of the game.

“All the players know the importance of it by now,” he said ahead of the match.

“We obviously speak about it among ourselves, so everyone knows it is a big game and we need to win it.”

As well as leading the way in terms of xG, his attacking statistics show how he’s adapted to the role.

If you compare his form from this season to the previous two, his goals per 90 minutes is considerably up.

As suggested by his xA, he’s creating fewer chances, with 1.02 compared to 1.13 last year, but now he’s the main man, it’s down to him to score those opportunities rather than make them.

And with two tall centre-backs in Duffy and Dunk, a not yet fully match fit Benteke may not be the man they need, and instead it’ll fall to their new talisman Zaha to try and end their awful goalless streak away from home and replicate his last trip to the Amex, back in that Championship play-off final when he scored twice.