Arsenal are playing a dangerous game. The Gunners want to bring Pierre-Emerick Aubameyang to the club, a big name attacker to fill the void left by Alexis Sánchez‘s departure to Manchester United, but are haggling over £5million.

According to the Evening Standard, Borussia Dortmund want £55million for the prolific forward but the Premier League side would rather complete a deal around the £50million mark.

The German club had shown an interest in Arsenal striker Olivier Giroud but Arséne Wenger doesn't want to let the French forward leave as part of the deal. After all, he is the perfect plan B.

However, Sport Bild believe the transfer will be finalised this week and Arsenal will bag their man without having to break their transfer record. Alexandre Lacazette, a summer signing from Lyon, currently tops that list after Jean Michel Aulas held out for £57million to allow the 26-year-old to leave the Groupama Stadium.

If Aubameyang does jump to the Premier League then it pits him in direct competition against the club's record signing. A change in formation might be the best way to fit them both into the starting XI, however, working under the assumption Wenger doesn't do this, who should lead the line for the Gunners?

We've taken a detailed look at how Aubameyang compares to the forwards already at the Emirates. 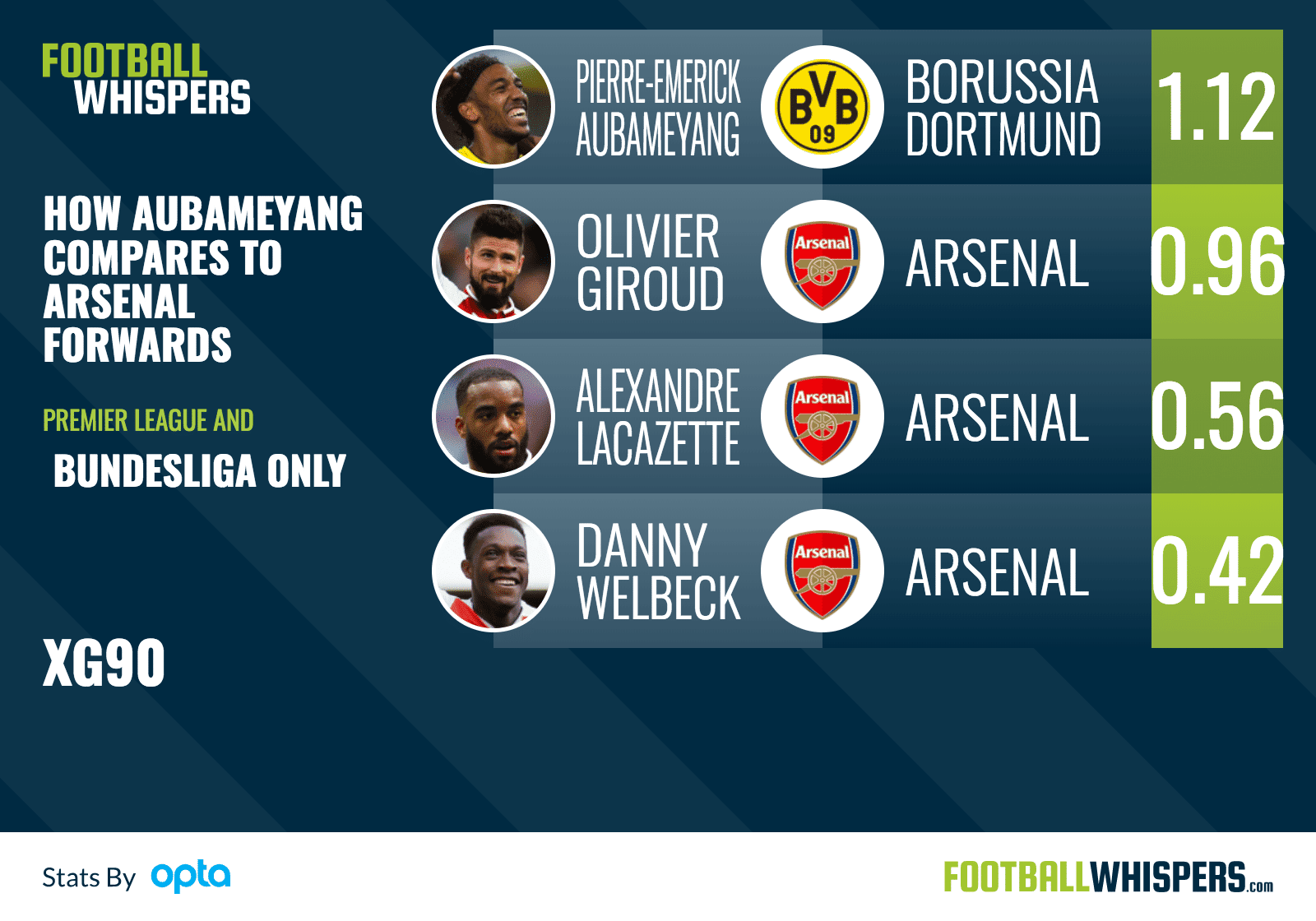 Arsenal, so far this season, are averaging 1.8 goals per 90 minutes and are the joint fifth highest scorers in the league alongside Chelsea. Sánchez hasn't been firing on all cylinders and Lacazette, after a bright start to life at his new club, has just one goal in his last ten matches.

In the graphic above we've looked at expected goals per 90 minutes. It quantifies the high quality chances a striker gets but it doesn't take into account how good they are at converting these opportunities.

As you can see, Aubameyang is one of the elite chance-getters in European football. In his last two-and-a-half seasons he's averaged an xG90 of 1.06. Meaning he's essentially getting on the end of chances which are the equivalent of a goal a game. That doesn't factor in the low quality chances he might be putting away.

What's interesting is Aubameyang's xG90 is twice as good as Lacazette's. The former Lyon man was prolific in France but his xG90 average in his last three seasons in Ligue 1 was 0.69. While he's a good chance-getter, he's not an elite one like the Gabonese forward.

Giroud's xG90 is 0.96 but the sample size for this is small – just 334 minutes – and it tends to be when the Gunners are throwing everything forward in search of a goal. His average xG90 for the last three-and-a-half-seasons is 0.54.

It's clear that, when it comes to getting into goalscoring positions, Aubameyang is one of the best around and not using him centrally would be naive on Wenger's part. 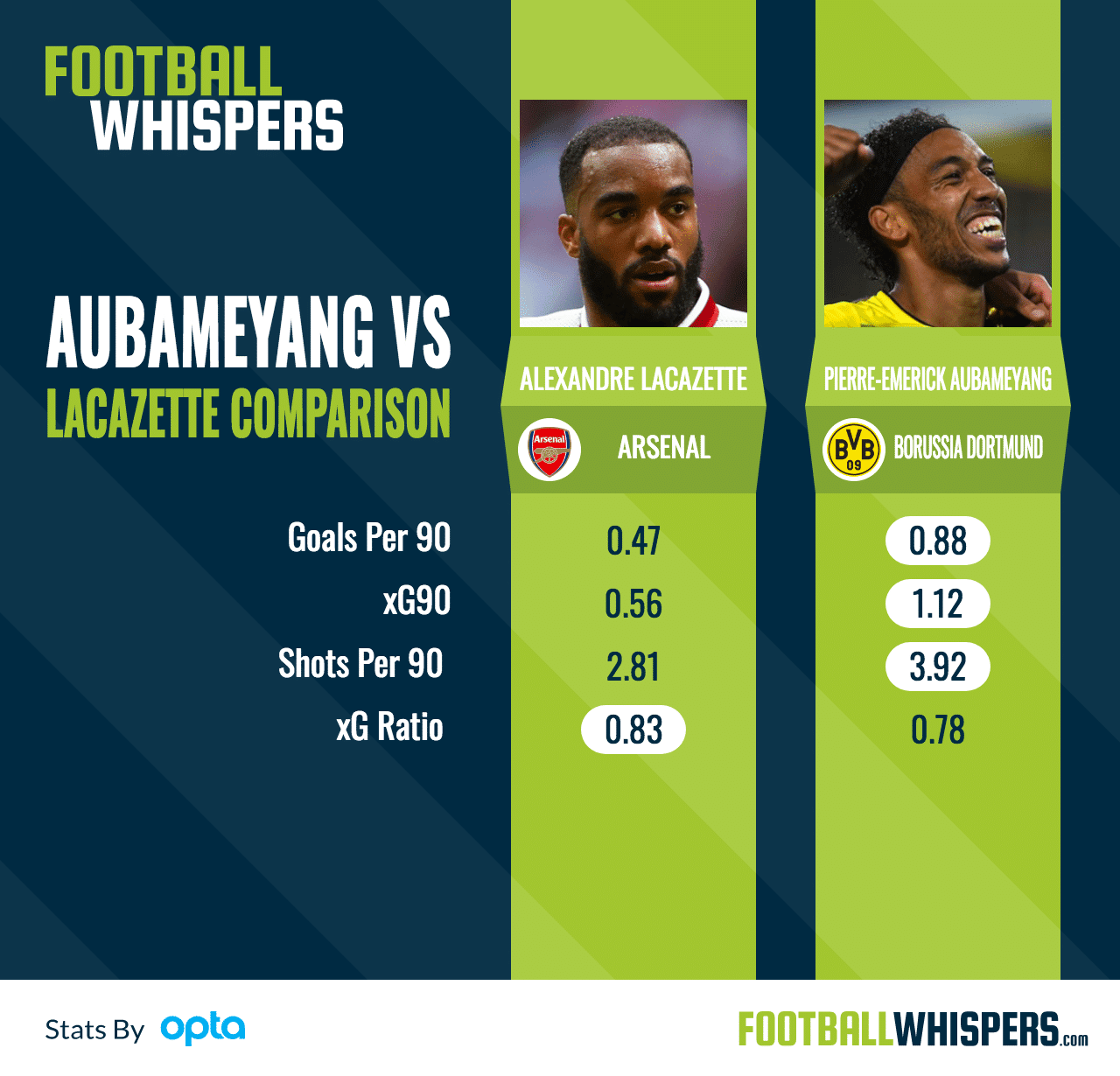 In the graphic above we've compared the Arsenal No.9 with the man you'd assume he will be battling it out with for a starring role in attack. Aubameyang comes out on top when looking at goals per 90, xG90 and shots per 90. The xG ratio sees Lacazette win the battle.

For those unfamiliar with the term it's simply goals divided by xG. In a way, It shows which players are making  the most of the opportunities coming their way. However, it's not one to be used in isolation. Lacazette may be the more clinical of the two but the volume of chances each striker gets means Aubameyang is likely to score more goals.

To put it more bluntly, It's taking Lacazette, on average, two games to reach an xG of one whereas Aubameyang is achieving that in one match.

It's an interesting stat when you consider Arsenal average more shots than Dortmund per 90 minutes, but the German side have 0.5 more efforts from within the six-yard area than their English counterparts. Arsenal's xG90 for the season is just 0.33 below Dortmund's. Lower than most would probably imagine due to just how open the Bundesliga is and how many teams in the Premier League look to sit deep against the top teams.

The one big difference, however, is when you compare crosses attempted per 90 minutes. Dortmund (18.7) put the ball into the area a lot more often than Arsenal (14.9) and many of Aubameyang's goals are scored this way. Will this impact his goal return for Arsenal? Or will the Gunners adapt to get the best out of the poacher.

In a recent feature on Football Whispers, we looked at the most clinical strikers in Europe with 11 goals or more. Aubameyang finished bottom of the list. This is because the forward has 13 strikes in the Bundesliga but his xG total is 16.58. He’s a player who is usually bang on when it comes to goals and xG. But then the flip side to this showed the Dortmund No.17 to have the highest xG90 of the 22 players on the list.

Better than Robert Lewandowski, Luis Suárez, Lionel Messi, Harry Kane and Edinson Cavani. He might be underperforming his xG total but hang someone with the knack of being in the right place at the right time is priceless.

Will Aubameyang get as many chances at Arsenal as he gets at Dortmund? It's hard to say for a number of different reasons. But if the club find a way to get the best out of Mesut Özil and new signing Henrikh Mkhitaryan then they have an elite forward in their team capable of firing them into the top four.