Rafael Benítez might have gone but Newcastle United are partying like it's the Graham Carr era all over again.

Between 2012 and 2015 United signed a plethora of French players, regularly raiding Ligue 1 while Carr was the club's chief scout. Some paid off handsomely; Yohan Cabaye, Moussa Sissoko and Mathieu Debuchy were Magpies favourites before netting the club more than £60million in transfer fees.

Buoyed by those successes, Carr and Newcastle overfished the Ligue 1 seas and, inevitably, the quality of their yield was not as impressive. Think Emmanuel Rivière and Rémy Cabella. There were plenty more, too.

This summer Newcastle have Stanley Nsoki.

Reports in France over the weekend claimed Newcastle had already agreed on a fee of around €11million (£9.98million) for the 20-year-old who was keen on a switch to Tyneside, according to the Evening Chronicle.

However, the French Under-21 international has since been named in Thomas Tuchel's PSG squad to play against Sydney FC in the International Super Cup at the Suzhou Olympic Sports Center in Jiangsu, China, on Tuesday.

Regardless, an agreement is anticipated, so what can Newcastle fans look forward to if and when Nsoki pitches up on Tyneside?

Born in Poissy, a western suburb of Paris, Nsoki is the antithesis of much of PSG's all-star squad; a local lad made good rather than costing a small fortune on a par with the GDP of a single nation.

He joined Les Parisiens from US Roissy-en-Brie in 2014 and progressed through the club's academy. However, it looked as though the teenager would go no further with PSG when he refused to sign a professional contract last summer.

With just a single year left on his contract at this point, Nsoki was subject of interest from some of Europe's biggest sides and, having seen team-mate Claudio Gomes move to Manchester City, was ready to leave the French giants.

But Thomas Tuchel intervened to save the day. The German tactician ensured Nsoki was heavily involved in pre-season – including in matches against signed an agreement until the summer of 2021. 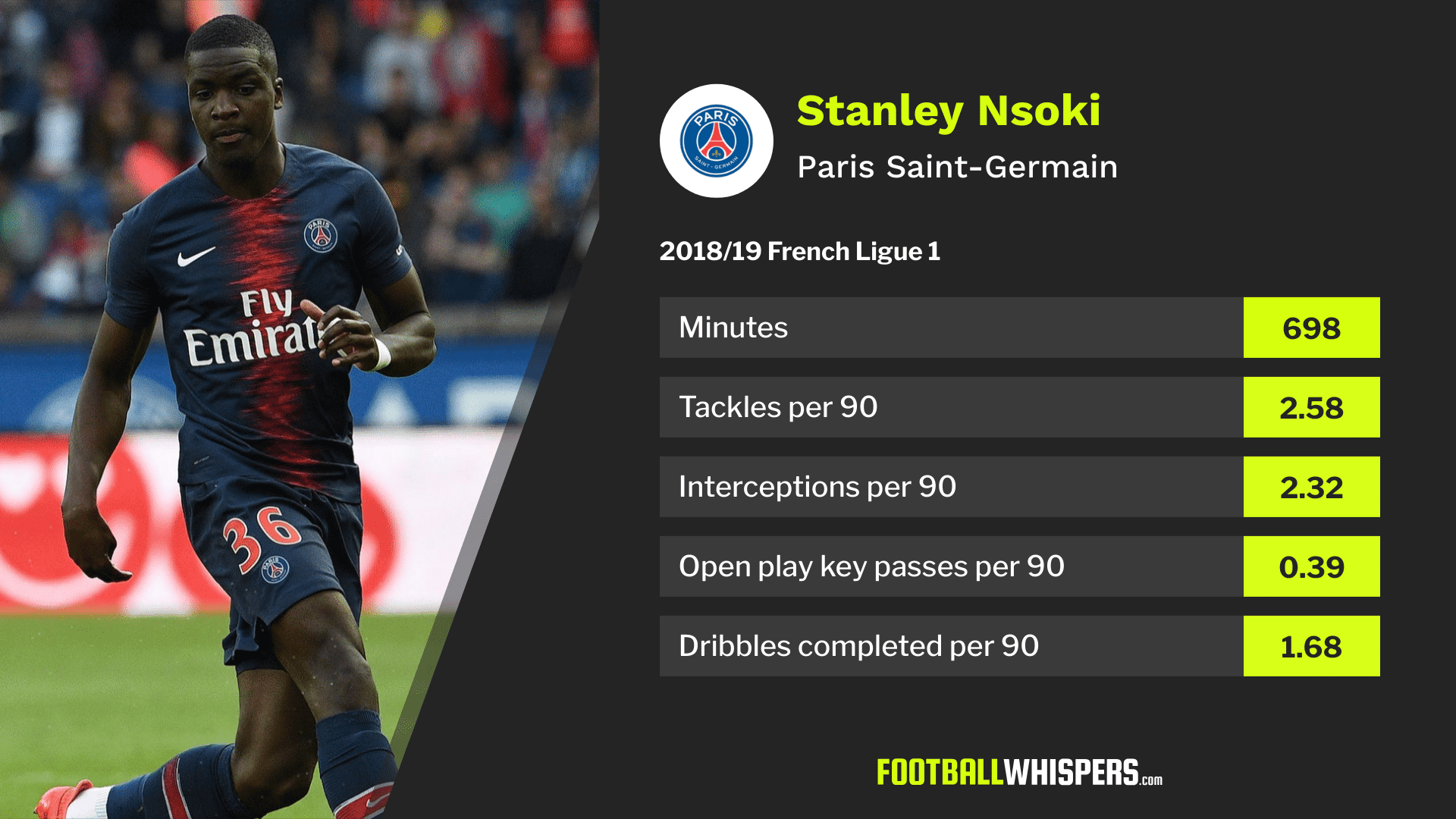 Nsoki finished the season having made 15 appearances in all competitions, sharing the role of back-up left-back with Layvin Kurzawa. One suspects that were there not interest from the Magpies in Nsoki, it would be Kurzawa who would make way in order to unblock the pathway to the first team.

A strong, aggressive defender who reads the game well and has good defensive awareness, Nsoki could, however, improve on his one-v-one defending while he is sometimes sucked inside creating space on the outside for wingers to receive the ball in.

While it is hard to read too much into Nsoki's numbers for the 2018/19 Ligue 1 season given he only played 698 minutes, they make for encouraging reaching nonetheless. He completed 1.8 of 2.58 attempted tackles per 90 and won 6.7 defensive duels, losing just 3.99.

On the other side of the ball, Nsoki is a big threat galloping forward from full-back. He registered two assists in PSG's 4-0 Trophée Des Champions win over Monaco.

On both occasions he got in behind Monaco full-back Andrea Raggi, bursting into the penalty area before cutting back for Christopher Nkunku and Timothy Weah to score. 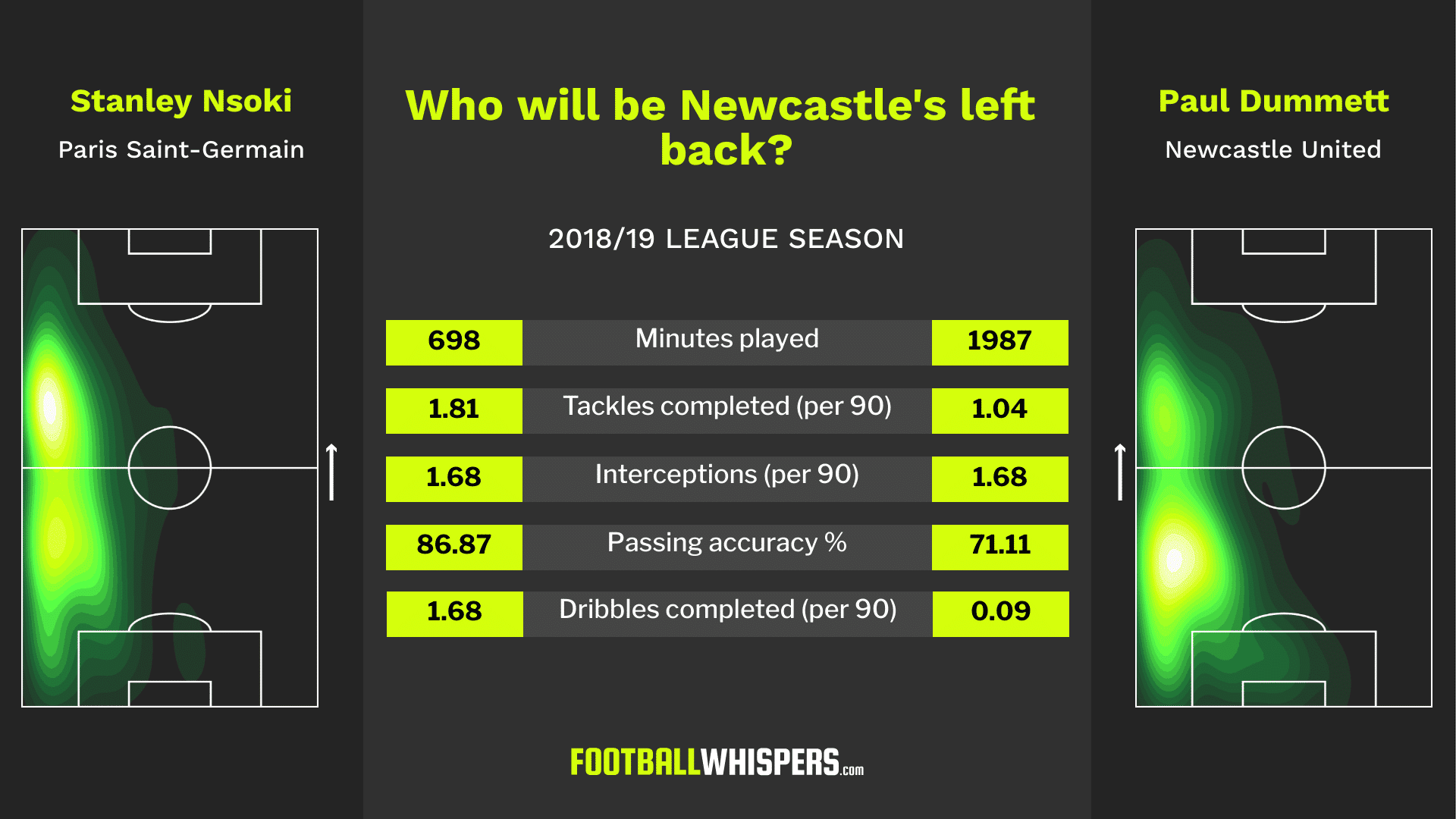 Interestingly, Nsoki comes out better than current Magpies left-back Paul Dummett in a number of key metrics, with his passing accuracy and dribbles completed per 90 both far better than the Welsh international's output – albeit in 1,300 minutes fewer.

That side of Nsoki's game should be particularly appealing to new Magpies boss Steve Bruce, particularly if he persists with the 3-5-2 system employed by his predecessor and during his time at Hull City.

Newcastle have strength in depth at centre-half with Jamaal Lascelles, Florian Lejeune, Fabian Schär and Federico Fernández. Even if the former Sheffield Wednesday boss reverts to a four-man defence, Nsoki has the qualities to thrive in the Premier League.

The Magpies have been burned by shopping in Ligue 1 on plenty of occasions but Nsoki could kickstart a second French Revolution at St. James' Park.