Manchester City arrived at Anfield unbeaten in the Premier League. They left defeated having been blitzed by a rampant Liverpool side playing their first league match since the departure of Philippe Coutinho, while club record signing Virgil van Dijk was sidelined with a hamstring injury.

It's arguably Liverpool's best performance under Jürgen Klopp and it put the rest of Europe on notice; go toe-to-toe with The Reds and you'll lose. There was great intensity from the home side from minute one.

Gini Wijnaldum and Emre Can appeared to be formidable in midfield but it was Alex Oxlade-Chamberlain who was the instigator of it all.

The summer signing scored the opener, picking the ball up 30 yards away from the Man City goal before going through the gears to glide past Fernandinho. Mohamed Salah‘s movement on the right stretched Nicolás Otamendi and the Argentine centre-back wasn't quick enough to shut the former Arsenal man down. The Liverpool No.21 fired his shot past Ederson from the edge of the area to send the Kop wild.

It's not going to win any goal of the season awards but it was a special effort in its own unique way.

A complaint often levelled at the Liverpool midfield is that it's too safe, it's pedestrian and it's easy to play against. Klopp opted to use Coutinho in a withdrawn role from time to time to add creativity in the middle third but the team still lacked that drive there, a player who could shift from first to fourth gear in the blink of an eye.

Oxlade-Chamberlain's goal showed that The Reds now have a player who can do that and it adds a whole other dimension to the Liverpool midfield, giving the opposition something else to think about. 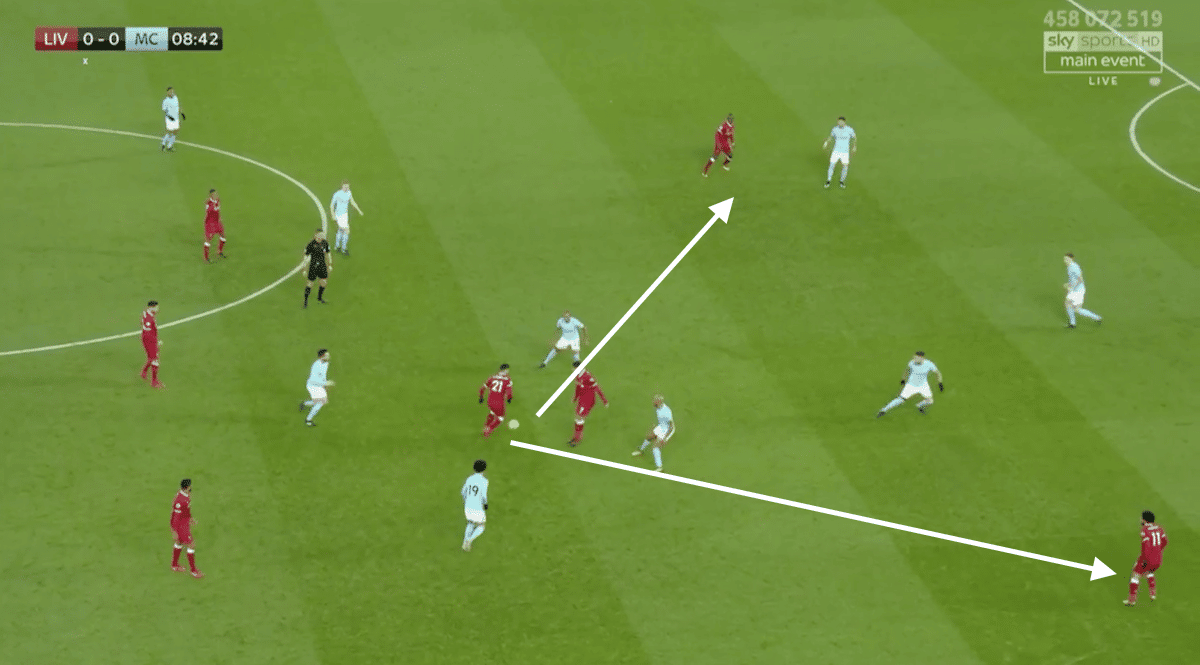 When he picks the ball up he has two forward passes on and many in this scenario would opt to play one of those passes. Salah is free on the right with Man City left-back Fabian Delph in a central area having tracked Firmino. The Egyptian is in a lot of space and he's quicker than Otamendi, the closest City defender to him.

Sadio Mané might be up against Kyle Walker but not many would fancy their chances when up against the former Southampton speedster. He might not be in the best form but he's still scoring and assisting on a regular basis.

They're not the easiest of passes but Oxlade-Chamberlain could play either and pass off responsibility. But he doesn't.

You can tell he's really bought into what Klopp wants and expects from him. In his post-match interview he highlighted it: “I just think I needed to be one of the players in the team that was one of the ones demanding to go and change the game — get assists and get goals,” he said.

“I've really been encouraged and pushed to do that.”

Oxlade-Chamberlain might not be as creative as Coutinho in the traditional sense, but he has the ability to take players out of the game, just like the Brazilian maestro used to. When the 24-year-old £35million summer signing picks the ball up there are five City players ahead of him. Yet his direct style allows him to just breeze past two of them without breaking a sweat.

That kind of player in the middle third for Liverpool will be invaluable moving forward. He completed seven dribbles yesterday, the most for Liverpool and the second most in the match behind Leroy Sané (9).

Surprisingly, he also finished with the most passes in the match for the home side (47) in what was a frantic 90 minutes. 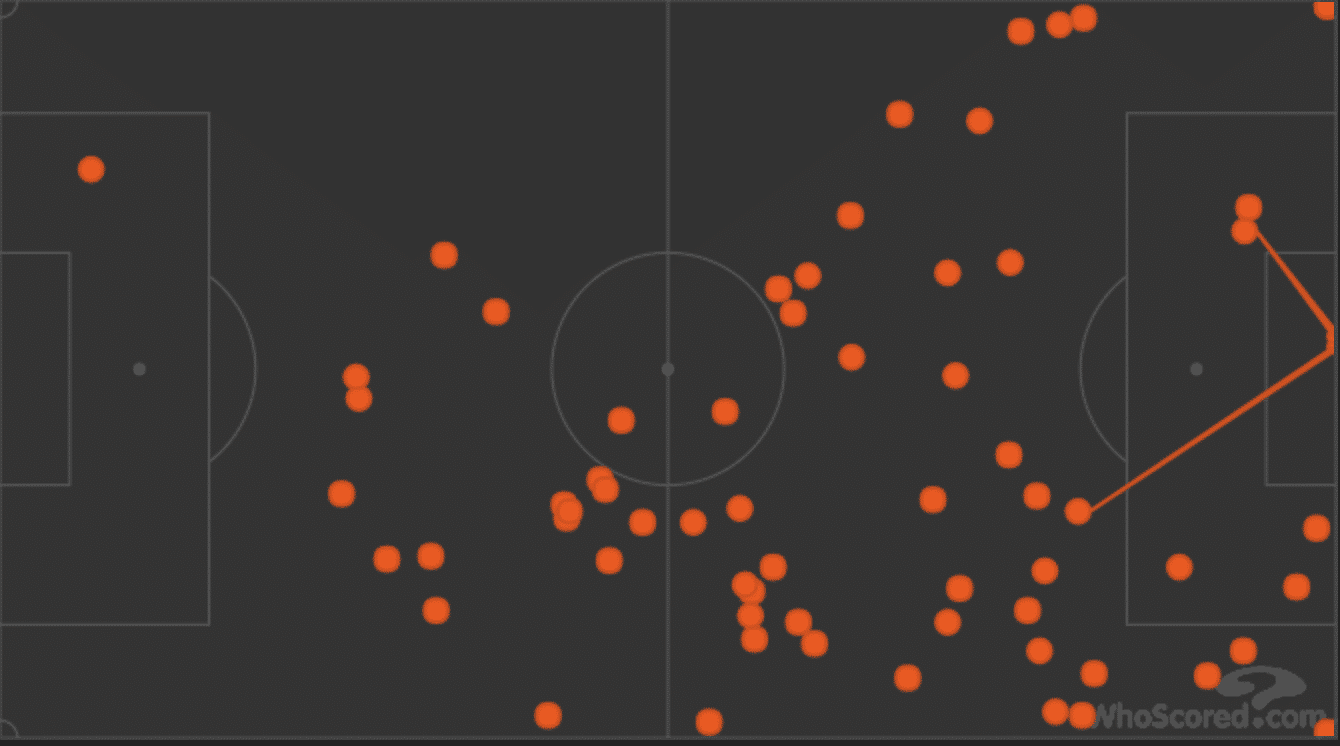 You can see on his touch map above, via whoscored.com, that he was all over the show against the champions elect. His flexibility and versatility was no doubt a reason Klopp and the recruitment team identified him as a potential target.

He's able to play a number of roles and his energy allows him to get about the pitch. On paper he was playing as a right sided centre-midfielder but you wouldn't really know that having looked at the touch map.

He wasn't just having an impact in possession. He was a key part in Liverpool press as they looked to smother City from the back. When he was linked last season there was a detailed scout report on the then Arsenal wing-back which highlighted his intelligence.

Klopp's tapped into that to make him a key part in the press. Though many will have you believe it's all about high energy and getting in the opposition's face, it's more to do with cutting off passing lanes and squeezing the opposition into a mistake.

If Liverpool had an anaconda-like grip on City playing out from the back then Oxlade-Chamberlain was the snake's head. He directed where City could and couldn't play the ball. 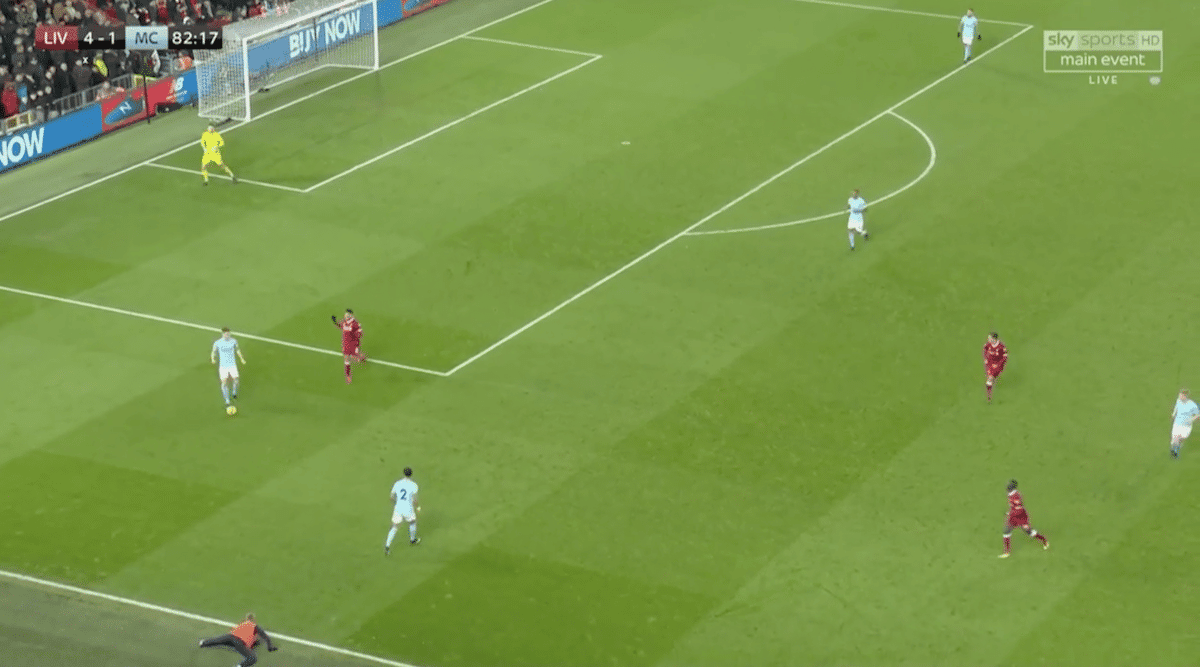 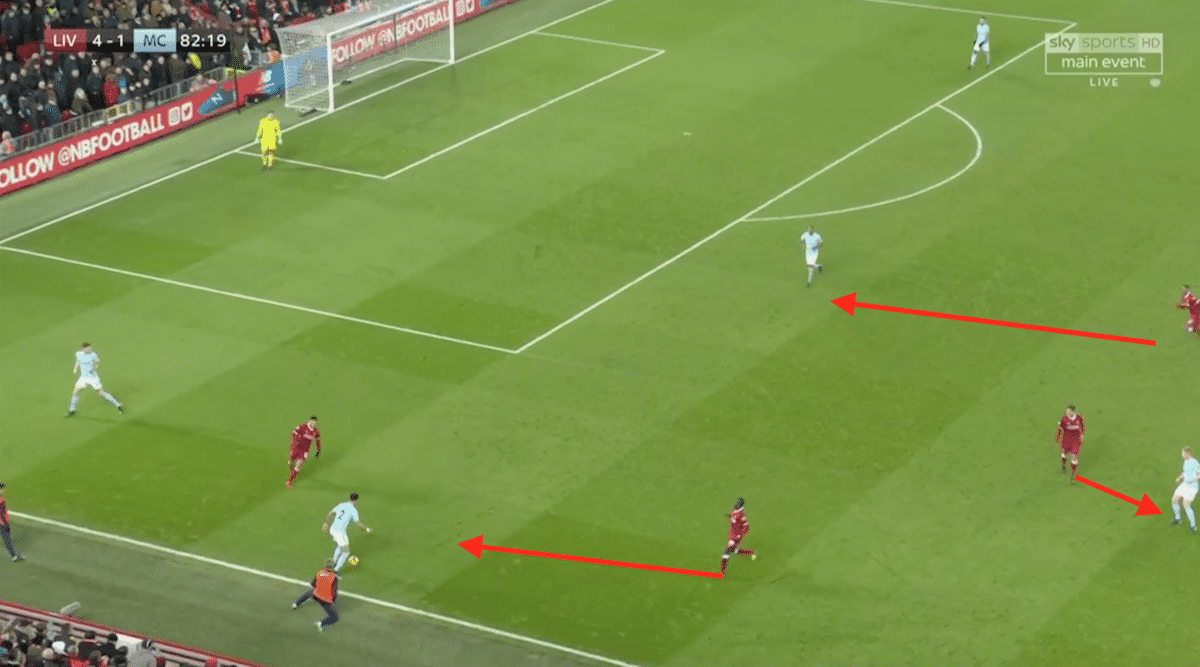 You can see it in the two pictures above. In the first one he's pressing John Stones, in possession of the ball, but he's positioned himself so that the former Everton centre-back can't cut back inside and play a pass to Ederson, Fernandinho or Otamendi. Stones has two options; play it long down the line or play a pass to Walker.

He opts to do the latter before attempting to make an angle for a return pass. Oxlade-Chamberlain cleverly blocks off the passing angle back to Stones and with Mané pressing him from the front he's forced into making a quick decision. A pass across goal into the feet of Fernandinho has been spotted by Wijnaldum who is already on the move and Firmino is keeping tabs on Kevin de Bruyne.

Liverpool should be doing all they can to get Naby Keïta to the club this month. If they manage it then they're going to have one of the most dynamic midfield units in the Premier League with Oxlade-Chamberlain and the RB Leipzig midfielder playing in box-to-box roles.

He's only been with Klopp for six months but the German has already refined the former Arsenal man's playing style and given him a clear direction. Because of this he's performing to a higher level on a more consistent basis. The Reds have quite the player on their hands but it's going somewhat under the radar. He's a perfect player and he's got the ideal profile for the former Borussia Dortmund boss.