A home win with goals at both ends

Drogheda United have done fairly well recently; they are unbeaten in their last four games, with two wins and two draws. However, Drogheda have five wins this season, and four of those wins came at home; they've managed just one win in 10 games away from home this season. Additionally, Drogheda usually fall short when they face St Patrick's; they lost 14 of their last 20 meetings with St Patrick's, with just two wins and four draws. For these reasons, we believe that St Patrick's will win this match; considering St Patrick's have no clean sheets in their last seven games, Drogheda should score as well.

St Patrick's have been one of the top scoring teams in the Premier Division so far; they scored 29 goals this season, only two teams have scored more. Conversely, St Patrick's have not been able to keep the goals out, especially recently; they have seen their defence breached in all of their last six games. As a result, most of St Patrick's games usually feature goals at both ends; as both teams scored in five of their last seven games. Considering both teams scored in three of Drogheda United's last five games, both teams will likely score in this match.

Very different seasons but valuable points up for grabs regardless

St Patrick's Athletic are pushing hard to break into the top three whilst Drogheda United are sitting just about comfortable above the league strugglers. Both could really do with three points here though to help push that positivity just a little bit more.

St Patrick's Athletic have had their fair share of struggles lately; they have just two wins in their last eight games, with three draws and three losses. St Patrick's will welcome Drogheda United to Richmond Park on Friday evening; they'll hope to improve their poor form by winning this match.

Drogheda United have improved a lot recently; they have no losses in their last four games, with two wins and two draws. Prior to that unbeaten run, Drogheda had lost four games in a row; will they be able to continue their good run of form against St Patrick's?

A quickfire FAQ on St Patrick's Athletic vs Drogheda United 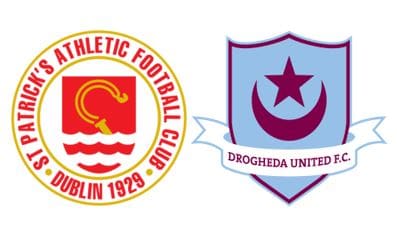