St Mirren have made a flying start to their cup campaign. Can they continue it against Partick Thistle? Find out with our St Mirren vs Partick Thistle match preview with free tips, predictions and odds mentioned along the way.

An easy win for St Mirren

St Mirren have started their league cup campaign off with three wins from three and are unbeaten in five games. Partick Thistle have made a reasonable start too having won two and lost one of their trio of cup matches but they have suffered a couple of defeats in recent times too. We can see St Mirren being far too strong for them in this match to inflict another loss on them. When the sides last met St Mirren won 4-1 whilst two of St Mirren's last three games have been victories with at least one goals breathing space.

One of the big reasons behind the impressive form St Mirren have shown lately is a good defensive record. Five games ago they recorded a 3-3 draw but then they've kept three clean sheets and conceded just one goal. Partick Thistle average 1.6 goals per game across their previous five matches; they've not played many sides who are as strong as St Mirren though and we can see another clean sheet coming.

As you might have gathered from our predictions to this point, there aren't many similarities between the two sides. One thing the duo do have in common though is the fact that their games regularly see goals. St Mirren have seen over 2.5 goals in eight of their last 10 matches. Partick Thistle's record over the past 10 matches sees seven of their games ending with at least three goals. The last four head to heads have all gone over 2.5 too.

Check out the latest form for St Mirren vs Partick Thistle

100% record to remain in tact for St Mirren

St Mirren are currently sitting top of their league cup group having won every match they've played. It is form that has extended their form in all competitions to five unbeaten. Curtis Main has scored in back to back matches so will be looking to bag again whilst defensively they've been very good too. Partick Thistle aren't far off the pace in group H though having won two of three. They've suffered against two better sides in Dunfermline and Rangers  in their last five though. If they're to avoid another loss here they will need Brian Graham to deliver again; he's scored four in his last three.

St Mirren vs Partick Thistle: Before you go 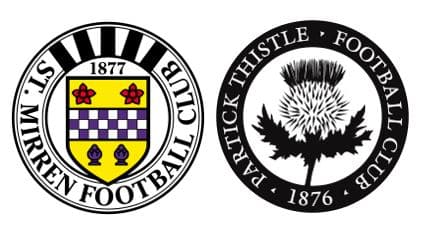