It’s been somewhat of a topsy-turvy November for Tottenham Hotspur. In the Champions League, Mauricio Pochettino’s men have looked like a real force and have taken maximum points from their most recent matches against Real Madrid and Borussia Dortmund. In the two matches they conceded just the two goals while finding the back of the net on five occasions.

Some are even tipping them to be dark horses for the Champions League. However, in the Premier League it’s been a different story. One win in five games – a 1-0 victory over bottom-of-the-table Crystal Palace – and only three goals scored.

Their last three matches have seen they add just one point to their Premier League tally. They fell to defeat in the North London derby, dropped two points at home to a managerless West Bromwich Albion side, before Claude Puel’s Leicester City beat them 2-1 at the King Power stadium. If Manchester City pick up three points against Southampton then Spurs will find themselves 16 points behind the leaders after just 14 games.

Furthermore, they’ll be four points off of fourth if Arsenal defeat Huddersfield Town. Granted, it’s not the end of the world all things considered, just being within touching distance of the top four over the Christmas period probably isn’t how Spurs fans would have envisaged their season going back in August.

There are a number of possible reasons for the downturn in form. One of which being that the players may be fatigued after their exertions in Europe. But this run of disappointing results coincides with Toby Alderweireld being ruled out with a hamstring injury.

The Belgian formed part of a defensive three, alongside Davinson Sánchez and compatriot Jan Vertonghen, which at times looked impenetrable. Spurs always suffer when they're unable to call upon the services of the experienced Belgian.

It might not seem like much on paper, but over the entirety of the season it's a 17 goal difference.

To make matters worse for Spurs, Alderweireld's absence has caused a ripple effect.

Pochettino has been forced to play Eric Dier as a defender, removing him from his usual defensive midfield role. This has then resulted in Mousa Dembélé being tasked with more defensive responsibility due to the fact they're still without the injured Victor Wanyama.

To put it bluntly, there's now an imbalance in the team. It was apparent during the loss to Arsenal, with the Match of the Day team highlighting how Dembélé was drawn to the ball and it left the defence exposed.

Dembélé's Involvement in the Mahrez goal

Riyad Mahrez, a one-time Tottenham transfer target, turned out to be the match winner last night. His curled effort in first-half stoppage time was brilliant and left Hugo Lloris with no chance. It was preventable, though. 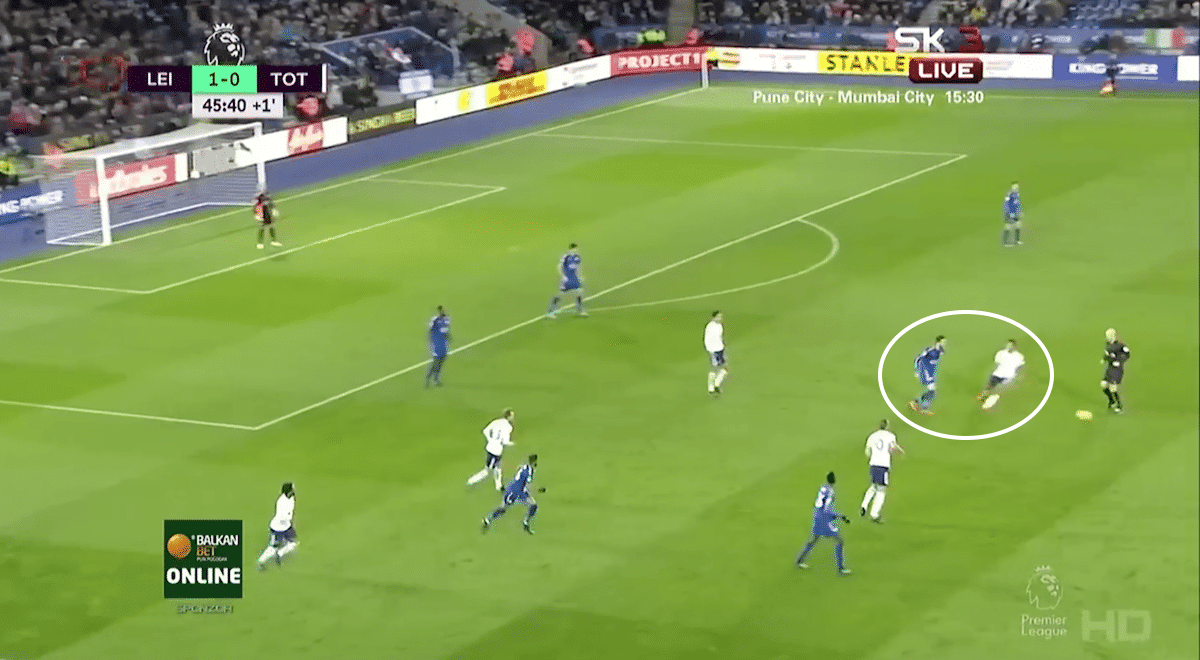 The picture above is taken just after Leicester win the ball back. A Christian Eriksen pass is intercepted by Danny Simpson and the right-back's header is picked up by Mahrez. The Algerian winger plays a quick pass into Vicente Iborra who in turn plays a first-time ball into Jamie Vardy.

In the picture above you see Dembélé, circled, pressing Iborra. This is effectively the defensive midfielder in the Spurs team in the attacking third. Pochettino's men operate with a high press so it's to be expected at times but Dembélé doesn't block off the pass into the striker's feet. He's slow to react and is easily taken out of the game. 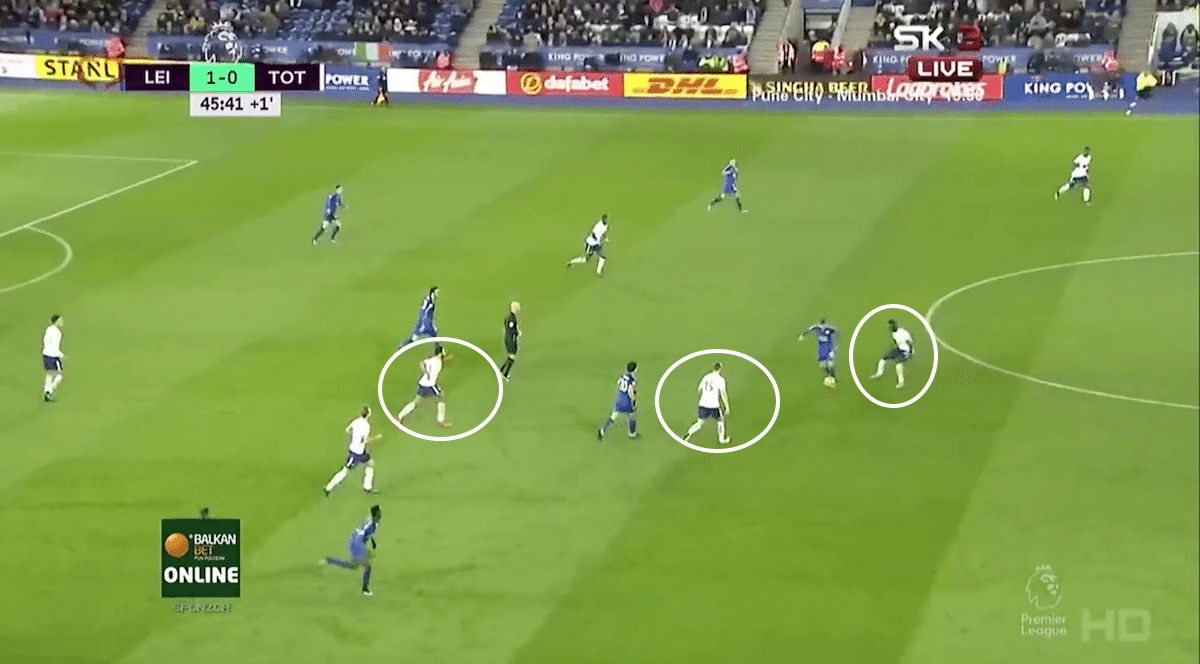 Vardy drops off of Sánchez to pick up Iborra's pass and Spurs immediately have a problem. The away side have three ‘defensive' players, all circled, in the Leicester half and none of them are covering the left side of the pitch. 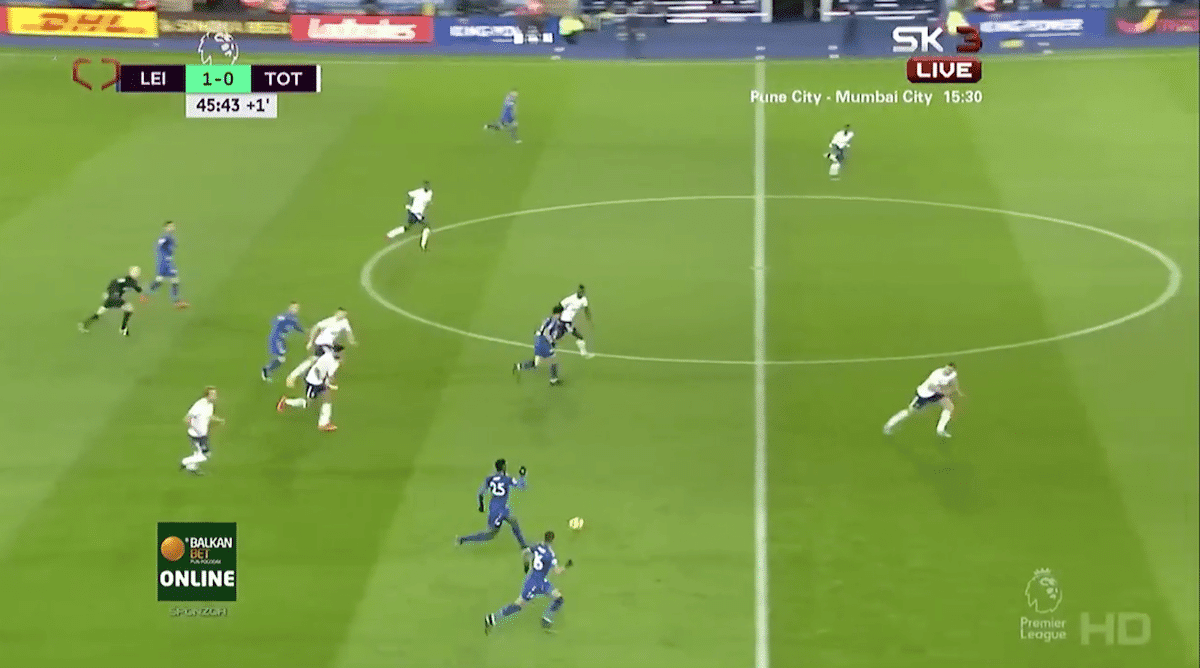 It's slightly fortunate but Vardy manages to nutmeg Dier, who seems to be caught on his heels, and the ball is worked to the Leicester right. Wilfred Ndidi, who had a fine game for the home side, drives forward into the space, attacking the isolated Vertonghen as Spurs scramble to get players back. 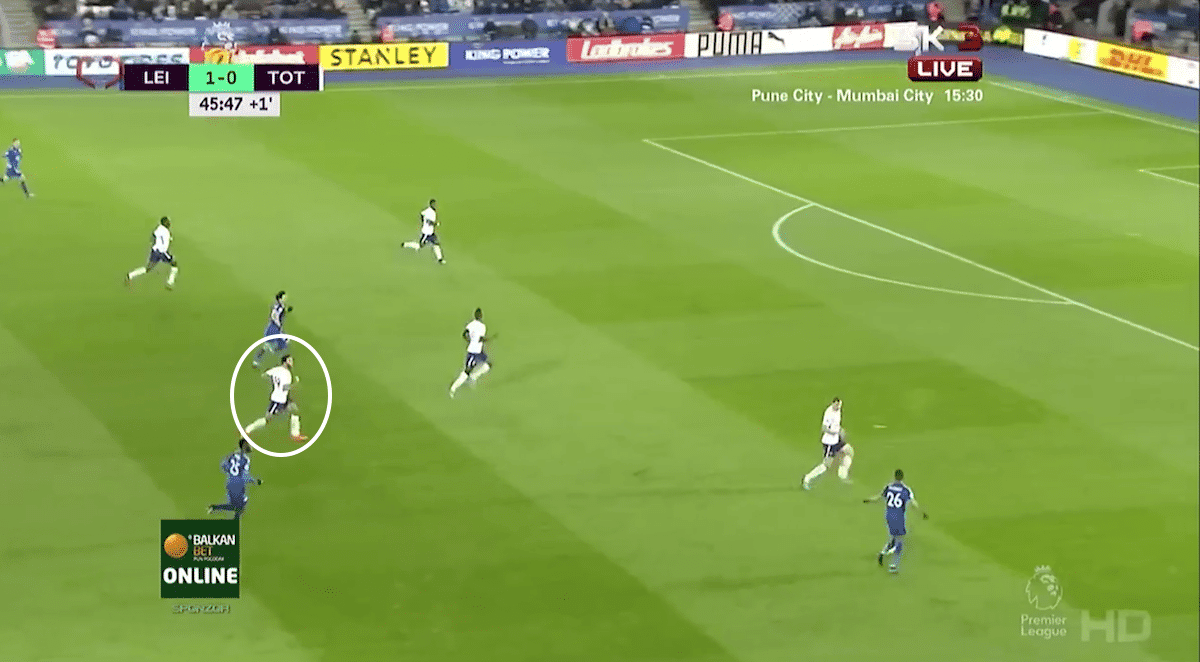 Ndidi plays the ball to Mahrez on the right and the 26-year-old, who is always going to cut inside onto his stronger foot, must fancy his chances against a left-footed centre-back in this situation.

Dembélé is circled. He should be the one looking to get back and act as a third centre-back alongside Vertonghen and Sánchez. The Belgian midfielder needs to do everything he can to make sure Mahrez isn't able to isolate the Spurs No.5. 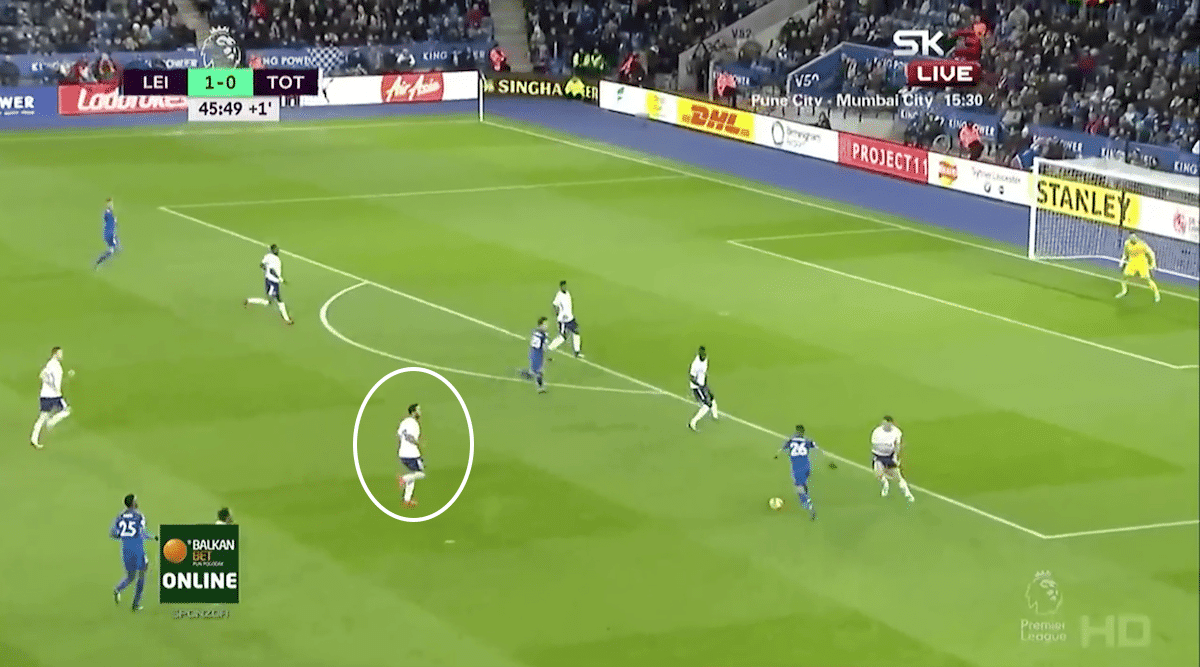 Spurs get decent numbers back and are in a fairly good position as Mahrez cuts inside. But, in a way, Sánchez is pinned in his position because if he leaves the line to press Mahrez there's an easy pass into the vacated space for Okazaki to attack.

The only option for the Leicester man is to line up a shot and Dembélé should be the man preventing that. But he doesn't. Instead his initial jog eventually resembles someone speed walking and Mahrez is afforded a lot of space to pick his spot.

So what does Pochettino do? His highly effective 3-4-3 system, like most in modern football, is reliant on certain individuals bringing it together. Without being able to call upon these players the cracks begin to appear and sometimes you just can't paper over them.