Tottenham Hotspur broke with tradition to sign Fernando Llorente. The Spanish striker joined towards the end of the summer transfer window for a fee of just under £14million, which is not an excessive outlay for a club of Spurs’ stature and ambition. However, at the age of 32, he is well above the typical age profile of their usual targets.

Since Mauricio Pochettino was appointed manager in 2014, they have brought in 22 players across seven windows. Of those 22 players, the oldest player signed – Llorente excluded – is Michel Vorm, who arrived at the age of 30. However, footballing convention doesn’t quite apply to the Dutchman, as he is a goalkeeper.

The oldest outfielders signed by Tottenham in the past three years prior to this summer were Moussa Sissoko and Federico Fazio, who both joined aged 27. Intriguingly, neither are viewed as successes – the former is now with Roma after an error-prone spell in London, while the latter was persistently linked with a move away during pre-season.

So when Spurs decided to make widely reported Chelsea target Llorente their third-most expensive signing of the 2017 summer window, the surprise around the move wasn’t entirely focused on the fact they had usurped the Premier League champions in the process.

Rather, a great deal of the shock related to the notion that they were going against their own embedded ethos.

Fortunately, there is more than enough evidence – both statistical and tactical – to suggest that Tottenham have picked the right player to relax their rules for. The former Juventus target man provides squad options and on-pitch qualities that Pochettino desperately needed.

Over the past few years, Harry Kane’s development has had an immense positive effect on the Tottenham forward line. However, it has also had one slight downside. At the same time as the sharp-shooting Englishman has grown into one of the most consistent and composed finishers in Europe, the team have come to rely upon his efforts.

That reliance has threatened to become an overreliance in recent times, with a failure to identify and recruit an able back-up to the 24-year-old causing some anxiety. With him leading the line, Spurs are guaranteed goals; without him, they have struggled to find an adequate replacement. 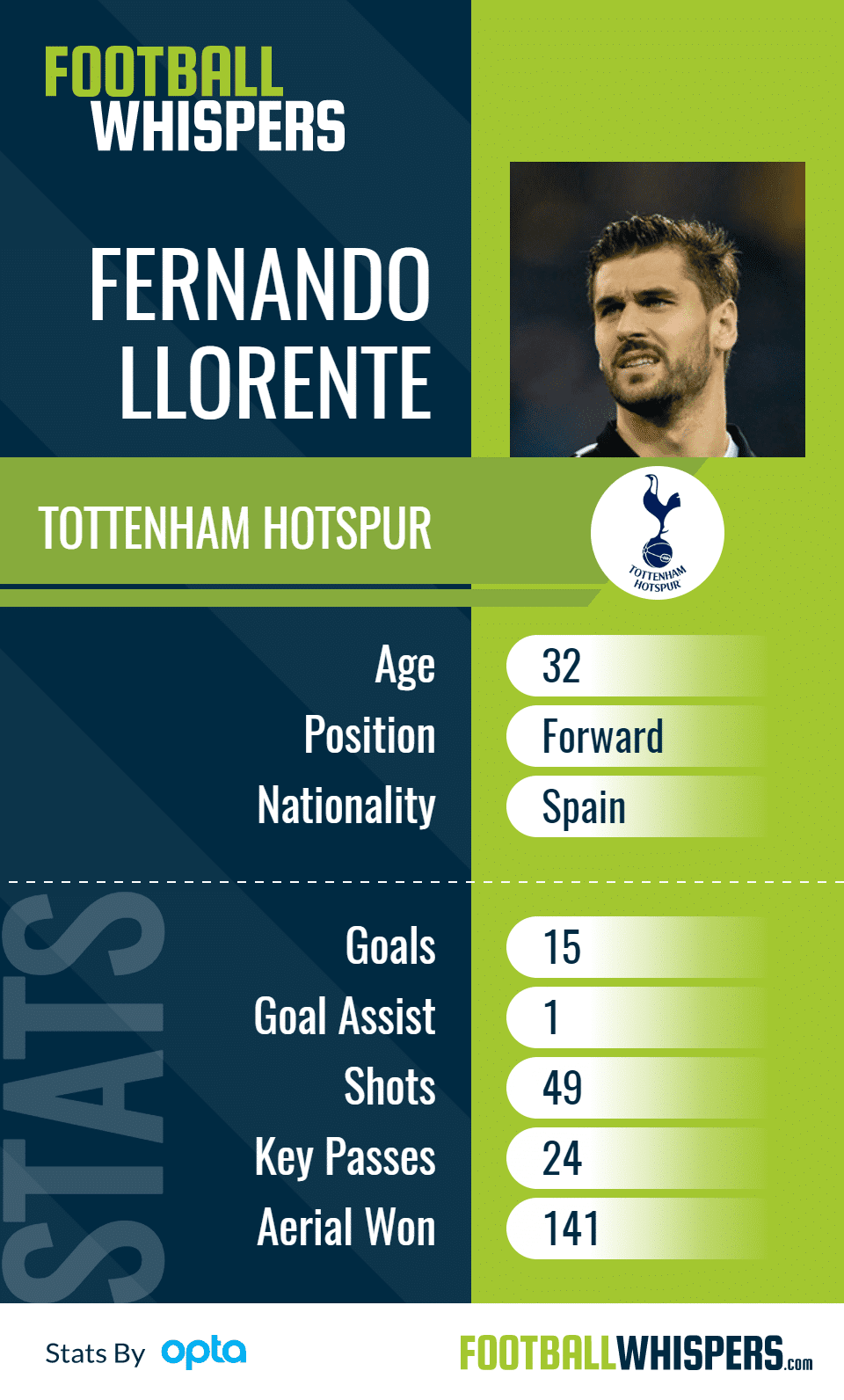 Son Heung-min filled in last season and did a fine job for a natural winger, but the South Korean’s taking up a more advanced position only vacates a slot elsewhere in the squad. And the very fact he was called upon in the first place was a damning indictment of Vincent Janssen’s inability to produce what was necessary.

The Dutchman arrived in England with a strong reputation. He was one of the Eredivisie’s most clinical hitmen and was regarded as his country’s next first-choice No.9 in the upcoming post-Robin van Persie era. But he found the net just six times in all competitions during his debut season, and his failure to move on in the summer may not endear him to Pochettino.

By signing Llorente, Tottenham have taken a weight off of Kane’s shoulders. No longer is his fitness and form an absolute prerequisite to success; now, they have a proven Premier League goalscorer to take his place when appropriate.

Last term the 32-year-old adjusted quickly to the English top flight with Swansea City, scoring a highly respectable 15 league goals. And, when it came to his overall statistical output, he was more productive than Janssen in a few areas.

While he averaged fewer shots per 90 minutes, his shot accuracy was six per cent higher. He also completed a greater percentage of his dribbles and contributed more passes. And, while he created fewer chances and contributes slightly less defensively, these numbers should pick up when playing in a more aggressive, attacking side.

A NEW TYPE OF THREAT

During his one season at Swansea, Llorente acted primarily as the sole leader of the front line in role nominally similar to the one occupied by Kane at Spurs. However, while the positions were similar, the way in which they operated were not, and they were entrusted with differing responsibilities.

The Spaniard played as part of a more direct side – 15.2 per cent of the Welsh outfit’s passes per game were long balls, compared to Tottenham’s 12.9 per cent. He also led the line for a less fluid attacking team, with only five sides scoring fewer goals from open play than the Swans.

Swansea also averaged 9.1 per cent less possession than Spurs, meaning Llorente was tasked with comparatively more defensive work and saw less of the ball than Kane. However, he performed his tasks well.

Paul Clement’s arrival as Swans manager midway through the campaign led to a more organised unit being put in place, and the Spaniard was pivotal to this. Not only did he act as a central reference point for direct passes through the middle and long balls over the top, but he held play up well, bringing team-mates into the attack.

In the defensive phase he proved a hard and intelligent worker, taking up good positions between the opposition’s centre-backs – and between their defence and midfield lines – in an attempt to force passes wide and instigate pressing.

Llorente will bring a new type of threat to Pochettino’s attack, offering a serious aerial outlet when the usual, patient build-up isn’t quite working. But he will also fill in adequately for Kane when it comes to defending from the front and finishing chances.