When considering areas Champions League finalists Tottenham Hotspur need to upgrade, the defence isn't one that immediately springs to mind. A reliable understudy to Harry Kane, someone to fill the Mousa Dembélé-shaped hole in midfield and a potential replacement for Christian Eriksen all take precedence.

Yet, according to reports, Mauricio Pochettino wants to add Bournemouth centre-back Nathan Aké to his ranks. The former Chelsea player has been a revelation for the Cherries since his £20million move in 2017.

The Blues reportedly have first dibs on the Dutchman as part of his sale. A fee in the region of £40million is being mooted but if the transfer ban is upheld, Spurs potentially have a free run at Aké.

On the surface, a big-money move for a defender may seem like a waste. Over the past two seasons, Tottenham have conceded, on average, just 37 goals over a 38 game period.

It isn't, by any stretch of the imagination, a problem area. However, it's only once you delve into the underlying numbers it all becomes a little clearer.

Since the start of the 2017/18 season, Spurs have an expected goals conceded total of 89.53. That works out at 44.7 per season, seven more than they've actually conceded. It shows they've outperformed this metric, primarily due to the exploits of Hugo Lloris in goal and not because of a resolute defence.

The much-maligned French stopper is actually a lot better than he's given credit for.

For context, Liverpool's expected goals conceded total over this period is 58.32 while Manchester City‘s comes in at 52.12. It highlights just how far away Spurs are from matching those two teams and having a sustainable, reliable defensive unit you can build a title challenge on.

There's no quick fix for this and systematic changes will have played a part in this. Aké isn't going to miraculously sure up this defence but what he will do is lessen the demands on Jan Vertonghen and Toby Alderweireld.

The two Belgians are the best defenders at the club. But they aren't getting any younger and a succession plan will have to be put in place sooner rather than later.

Davinson Sánchez and Juan Foyth arrived as the future for the Spurs backline and while that could well be the case down the line, Pochettino needs a third-choice centre-back capable of challenging them for a start now. Sánchez, though given ample opportunities, has failed, as of yet, to nail down that third-choice spot.

While Tottenham icon Darren Anderton claimed Aké would be a perfect replacement for Alderweireld, it's actually Vertonghen the Dutch centre-back shares a number of similarities with. 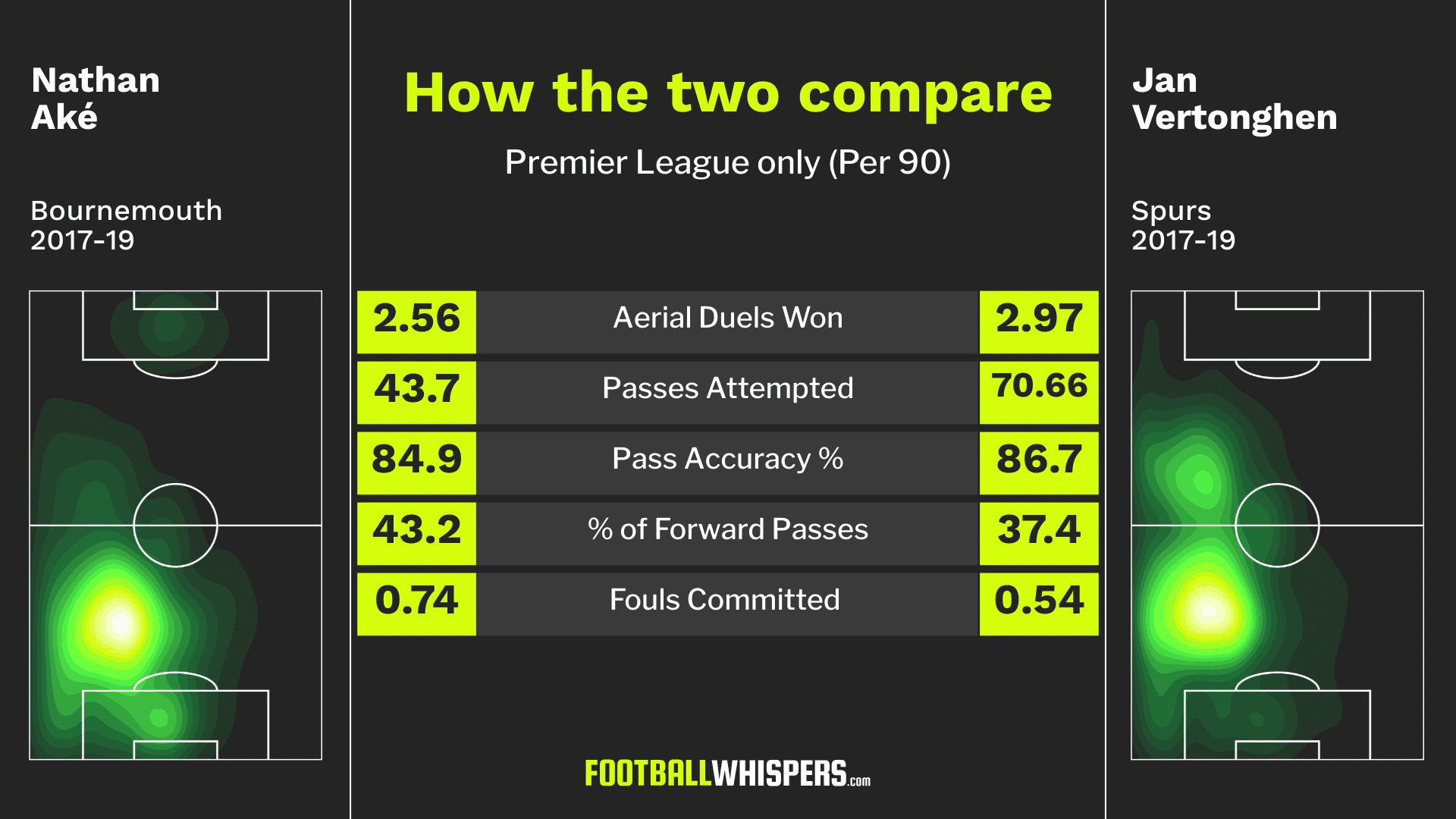 For starters, both play on the left side of defence and are capable of filling in at left-back if necessary. Of Spurs' defenders, Vertonghen is the most dominant in the air, winning close to three aerial duels per 90. Aké isn't far behind, winning 2.56.

In that sense, the Bournemouth defender could fill the position as the aggressive centre-back in the Spurs defence.

However, he would have to adapt to seeing a lot more of the ball. Though Eddie Howe's men are often praised for the way they play football, they're nowhere near as commanding in possession as Spurs are. Last season, the Cherries averaged 47.7 per cent of the ball to Tottenham's 56.7 per cent.

Aké is adept when on the ball, completing 84.9 per cent of the 43.7 passes he averages. But that pales in comparison to the 70.66 Vertonghen attempts, and the Spurs No.5 still manages to complete a slightly higher percentage of his, too. 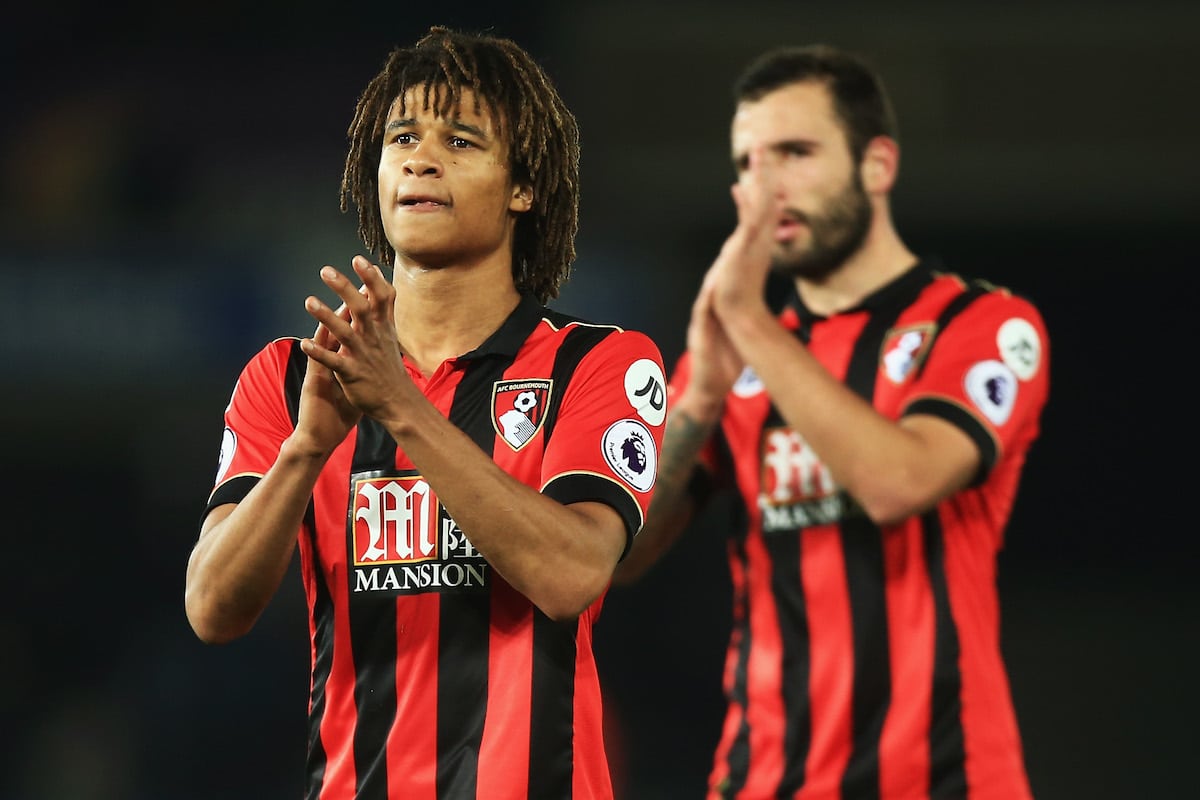 The 24-year-old Netherlands international is a little more adventurous on the ball, with more than 40 per cent of his passes going forward compared to Vertonghen's 37.4 per cent. But this could be down to the style in which Bournemouth play, they're always looking to release David Brooks, Ryan Fraser and Callum Wilson really early.

He's not a serial fouler, either, averaging fewer than one foul per 90 – a positive for a defender. He's also much more of a goal threat than his Spurs counterpart. Over the past two seasons, Aké has found the back of the net on six occasions; Vertonghen has one goal to his name.

Having a goal threat from set pieces has gone from being a luxury to a requirement in recent years with Liverpool adding Virgil van Dijk and Manchester City acquiring Aymeric Laporte. Both chipped in with vital goals last season. If Spurs are able to add that to their ranks then their unpredictability factor increases, and so do the chances of picking up maximum points.

For £40million, Aké would be a sound investment. He'd arrive with Premier League and international experience, but with the potential to improve too. He could form part of the Spurs backline for the next eight years while helping them replace one of the best defenders in the league.