The 2011 South American Under-20 Championship in Peru was a tournament which produced considerable excitement in Brazil as their promising squad romped to a third-consecutive title just a year after the senior team suffered a meek World Cup quarter-final exit to the Netherlands in South Africa.

Just three years from hosting the World Cup, a new generation of potential Selecao stars was emerging with Neymar the lynchpin and obvious icon-in-waiting having finished the competition as top scorer with nine goals, including two in the final against Uruguay.

Also on target in a comprehensive 6-0 win over their neighbours in Arequipa was Danilo, now of Manchester City, who will be joining Neymar in Russia next month. The other goalscorer that day, who claimed a hat-trick was Lucas Moura but he will be spending this summer, like he did 2014 watching from afar.

Forecasting the career trajectory of wonderkids is far from an exact science with so many determining factors beyond just what happens on the field, but declaring in 2011 that Lucas may never play in a World Cup would have been met with some shock.

He still has probably two more shots at Qatar 2022 and the 2026 tournament but with Brazil’s production line so proficient and prolific in producing attacking midfielders his window appears narrow.

How Lucas got to this moment where his absence from Tite’s squad was barely a footnote in the overall discussion, is a mixture of misconceptions over him as a player, the ill-conceived move to Paris Saint-Germain too soon in his life and career and, as he’s admitted, homesickness.

Spurs’ deadline day £25 million acquisition of the 25-year-old was met with little fanfare outside of north London and his six flittering Premier League appearances showed promise but not a great deal of production, at least not in an obvious sense.

Because, with a full pre-season behind him and a chance to settle into everyday life in England, Lucas can be let loose for Spurs next season and be the asset Mauricio Pochettino believes he can be.

By nature his best position on the field, as a right-winger, guarantees inconsistency. Wingers operate on the perioheries on the field, the areas where the ball travels to the fewest amounts of minutes. The simple laws of time state that they will see less of the ball than a central midfielder, so therefore have less of an opportunity to make a significant impact.

In an age where football demands its players to increasingly be all-rounders, Lucas is a throwback to a time when goalkeepers only used their hands, defenders defended and wingers stayed wide and waited to strike.

The good news for Lucas is he’s playing on a team who do stretch the field.Tottenham ranked fourth last season for average width of possession per game at 30.7m, that was an increase from being eighth in 2016/17 at 28.92. Pochettino increasingly wants to see the ball spread wide.

The Spurs coach implores his full-backs to commit to that task with Kieran Trippier, Ben Davies, Serge Aurier and Danny Rose as important in an attacking sense as they are at the defensive end.

With such a narrow midfield and Son Heung-Min and Erik Lamela attackers who may start from the flank but like to play inverted so they can cut inside, the role of Spurs’ full-backs in exploiting space is integral to Pochettino’s gameplan.

However, while Trippier, Davies and Aurier enjoyed, with varying degrees, good seasons and Rose persona non grata, what they didn’t offer is any penetration beyond receiving the ball, advancing and crossing.

Trippier finished the season as the most creative full-back in the Premier League with 1.41 open play key passes per 90 but his 0.62 successful take-ons ranked him 32nd, Davies’ 0.58 had him 34th, Aurier in 14th with 1.0 and Rose was the best of the bunch with 1.43 but didn’t play the required minutes for a ranking.

Taking a dribbling statistic and comparing full-backs with a winger is perhaps a trifle harsh but Lucas’ 3.02 per 90 is more than double Rose’s number. Never mind just in wide areas, only Mousa Dembele’s 3.29 exceeds Lucas in the Spurs squad.

In overall Premier League rankings, if Lucas was to have maintained that figure over the course of the season he would be 16th, just behind Alexis Sanchez.

Dribbling is all well and good and there are intangible benefits in terms of opening up space for team-mates but what does it matter if there is no production at the end? An accusation frequently levelled at Lucas, particularly during his time in Paris.

But in his six Premier League appearances he has shown a desire to share the ball and create chances for his team-mate with 2.16 open play key passes per 90, a number that exceeds Spurs’ great creator Christian Eriksen who hit 1.75.

And in an overall league context, Lucas would be fourth behind Sanchez (2.22),Mesut Ozil (2.74) and Eden Hazard (2.81). It’s all hypothetical but that he was achieving this number as a squad member with no consistency in selection is impressive.

The number that should really shine brightest for Pochettino is his 0.38 expected assists per 90 which places him level with Kevin De Bruyne at the top of the Premier League rankings. 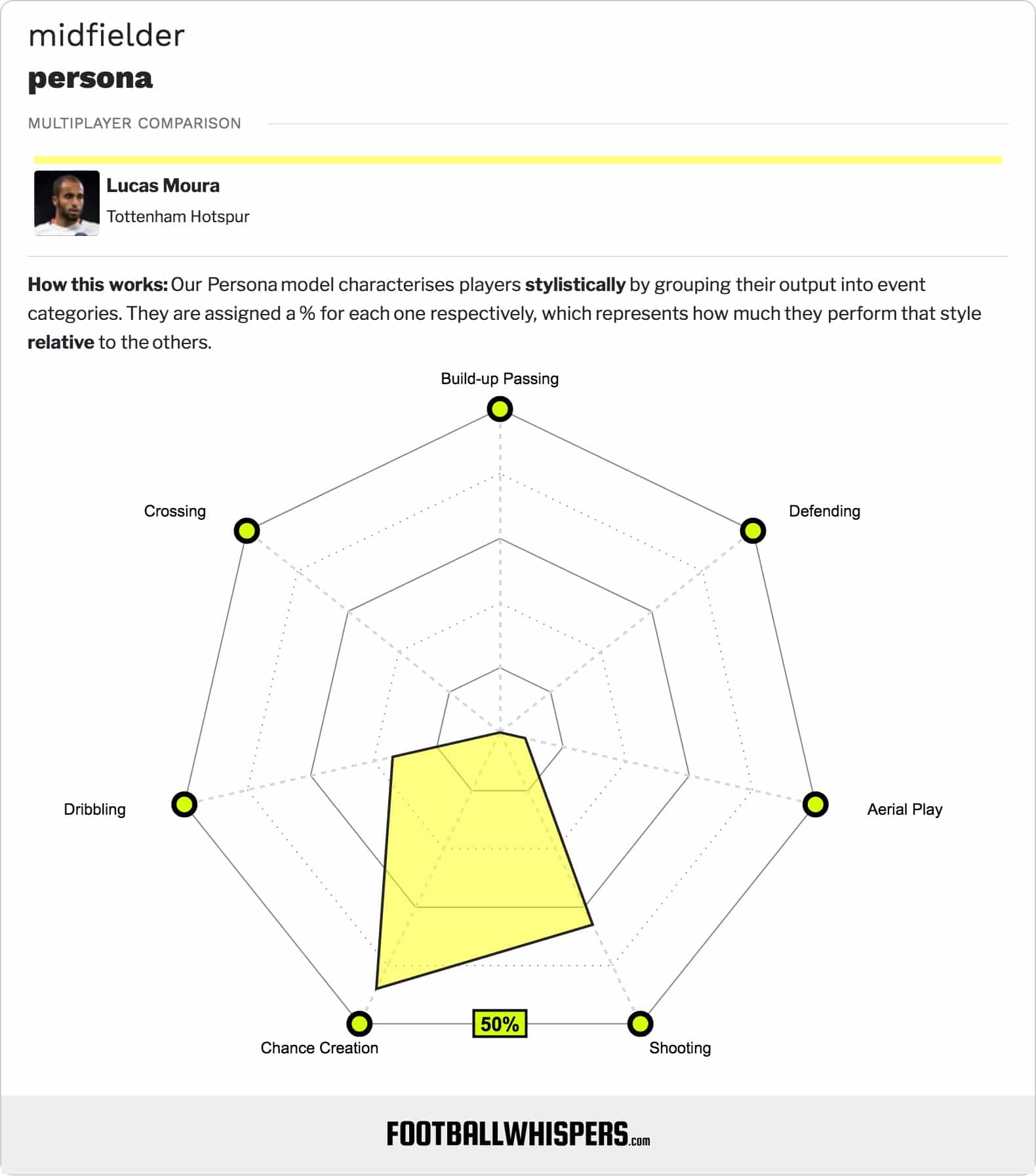 The key for Pochettino is how to best utilise Lucas as his tactical rigidity, theoretically and based on his time in Paris, only lends him to a certain amount of formations.

Lucas could be squeezed inside as an auxiliary playmaker but his only two starts of the season gave a clear indication of what his manager plans to do with him as he was fielded on the right of the attacking midfield three in a 1-1 draw at Brightonand then shifted to the left for the 5-4 win over Leicester.

Common wisdom dictates that by starting such an obviously offensive and orthodox winger as Lucas would affect Spurs’ defensive solidity and put either Trippier or Davies under extra pressure. But 1.73 tackles per 90 shows a player committed to more than just the next dribble.

It’s a number continuing he was producing at PSG last term (1.7) and would also rank him seventh for Premier League attackers, behind Leicester’s Shinji Okazaki (1.82) who’s frequently praised for his work rate and unselfish running.

His 0.86 interceptions per 90, not achieved by standing still or slacking on your defensive duties, is second in the English top-flight with Newcastle’s Ayoze Perez topping the standings on 0.93.

Pochettino showed impressive restraint in the transfer market last summer, although the Argentine had indicated he wants significant investment to close the gap on the two Manchester clubs.

With so many exciting attacking midfielders throughout world football and a need to support Kane, the temptation will surely be there to bolster an area of the field already featuring Eriksen, Son, Lamela and Lucas but progress could be achieved by sticking to what he already has.

Lucas may never become the player Brazil wanted him to be in 2011, but providing Pochettino persists he can certainly turn into something special for Spurs.