Mauricio Pochettino has transformed the mentality at Tottenham Hotspur. Since arriving in 2014, he has overseen the club’s graduation from top six contenders to title challengers. At the same time, he has enabled Spurs to overtake Arsenal.

After an end-of-season collapse in 2015/16 that saw Spurs finish behind their fierce rivals, despite having mounted the more concerted title bid behind eventual champions Leicester City, last season saw them cement their status within north London’s footballing hierarchy.

Tottenham finished second, closer to first-placed Chelsea than third-placed Manchester City. Arsenal, meanwhile, lagged 11 points behind them in fifth, missing out on Champions League football for the first time in Arséne Wenger’s time at the club.

This also meant that Spurs finished above the Gunners for the first time since 1995. The changing of the guard was confirmed, having previously been hinted at in results between the two teams since Pochettino took charge of the former.

Under the Argentine’s auspices, Tottenham have won two and drawn four of their six Premier League meetings with Arsenal, scoring nine goals and conceding six. They have picked up ten points, while their rivals have acquired a mere four.

Spurs will be hoping this form continues this Saturday, when they travel to the Emirates Stadium. Here we analyse their opponents’ weaknesses, and how they could exploit them to further establish their position in north London.

HOW TOTTENHAM SHOULD SET UP

Only Manchester City have averaged more possession than Arsenal in the Premier League this season, which gives a small indication of the way Wenger’s side tend to play.

Generally speaking, they dominate the ball, though this is not necessarily their approach for big games.

They had less than 50 per cent of possession in crucial clashes against both Chelsea and Manchester City, although their setup against the former may have been influenced by the 4-0 thrashing dealt to them by Liverpool two games prior.

With a home crowd behind them and two wins in their last three league fixtures, Arsenal may opt for a less conservative game plan this weekend. However, Tottenham should nonetheless opt for an aggressive, attack-minded approach.

Pochettino’s side have settled nicely into a rough 3-5-1-1 shape in recent weeks, with this system providing the framework for wins over both Liverpool and Real Madrid. There is no need to move away from this, but the personnel selected can differ greatly.

Should he be fit, Dele Alli could start on the left of the three-man central midfield, as he did against Liverpool. Christian Eriksen could take up the right-sided role, with Eric Dier holding.

Son Heung-min would then support Harry Kane – again, assuming he is fully fit – up front.

While they tend to dominate possession, Arsenal’s passing game is not as effective as many of the teams around them atop the Premier League.

Most top sides use possession to carry out a specific tactical scheme in order to score a goal, but the Gunners often appear simply to have possession with scoring a goal as the sole aim. In short, they miss a step, and their passing often seems unstructured and purposeless as a result.

This lack of structure is something Tottenham could take advantage of, particularly in Arsenal’s early build-up. The below image highlights the issues Wenger’s side can face. Their central defender within the 3-4-2-1 receives the ball, but neither of the two central midfielders are available – Granit Xhaka is covered, while Aaron Ramsey is far too high up the pitch to be safely passed to. 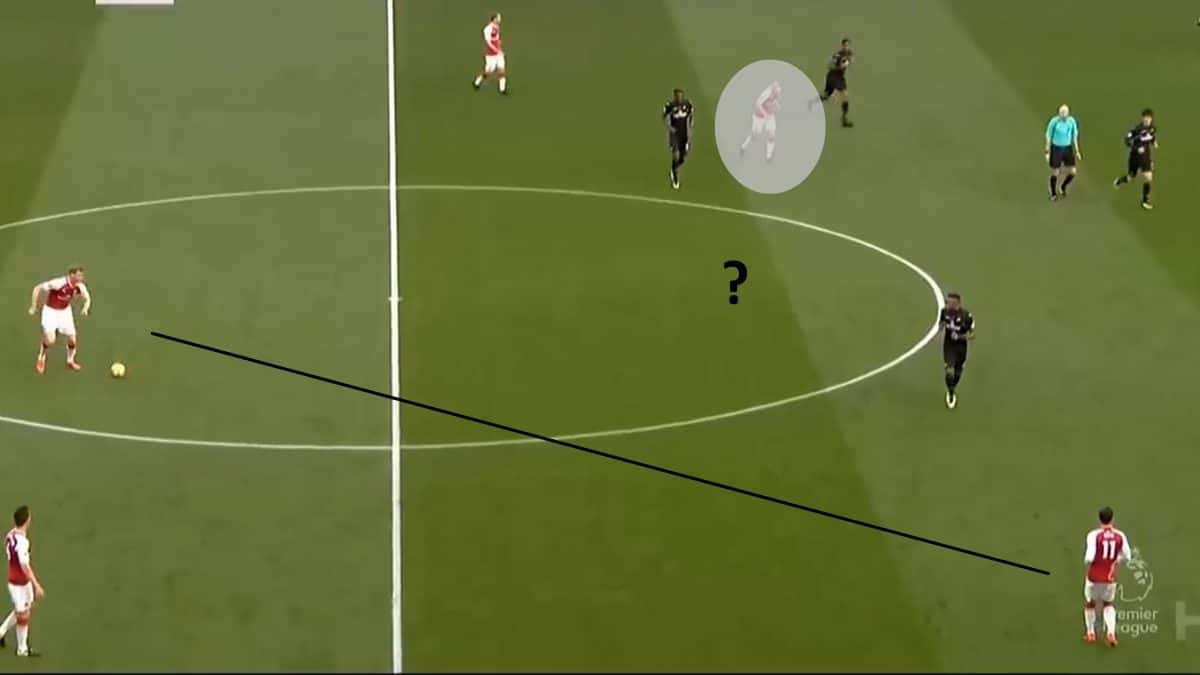 Spurs showed against Liverpool that they absolutely do not have to press high to press well. Instead, they sat off and allowed their visitors to build possession from the back, only pressuring when the ball entered midfield. This created space behind the opposition to be exploited upon winning the ball.

By taking up a relatively deep 5-3-2 defensive block, Tottenham would occupy central areas well and force Arsenal wide – this is significant considering only Chelsea attack more through the middle – before pressing if and when it entered the midfield area.

TOTTENHAM CAN OPEN UP ARSENAL

When they travelled to Stamford Bridge and collected a point with a 0-0 draw back in September, Arsenal proved their defensive mettle. That match showed that, while they have the third worst defensive record in the Premier League’s top half, they are capable of stifling their opposition in individual games when they set out with this in mind.

That performance came during a run of four consecutive clean sheets, but since then Wenger’s side have conceded eight goals in four league games. In those games they have generally taken an attacking approach, leaving themselves more open in the process.

As seen in the below image, taken from Arsenal’s defeat to Manchester City, they tend to defend in a 5-4-1 shape. Their inside forwards revert back to the wide positions of the midfield four, while their wing-backs join the defensive line. However, there remains a significant amount of space between the defence and midfield lines. 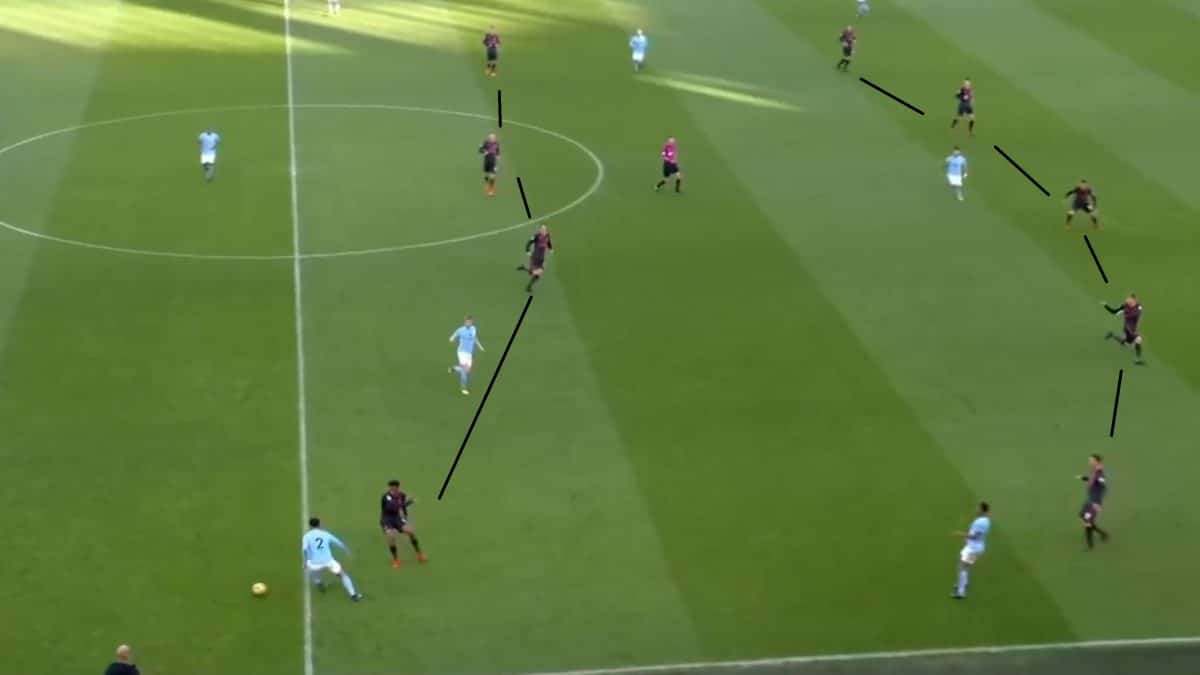 Tottenham should look to their outside central midfielders, ideally Eriksen and Alli, to push forward into the aforementioned space between Arsenal’s lines. In doing so they will create chances for dangerous through balls and could connect with the front two of Kane and Son.

Arsenal are also vulnerable in defensive transitions. Having committed players forward, they are not an organised counter-pressing side and do not always get back into their shape quickly, allowing the opposition time and space to launch counter-attacks. 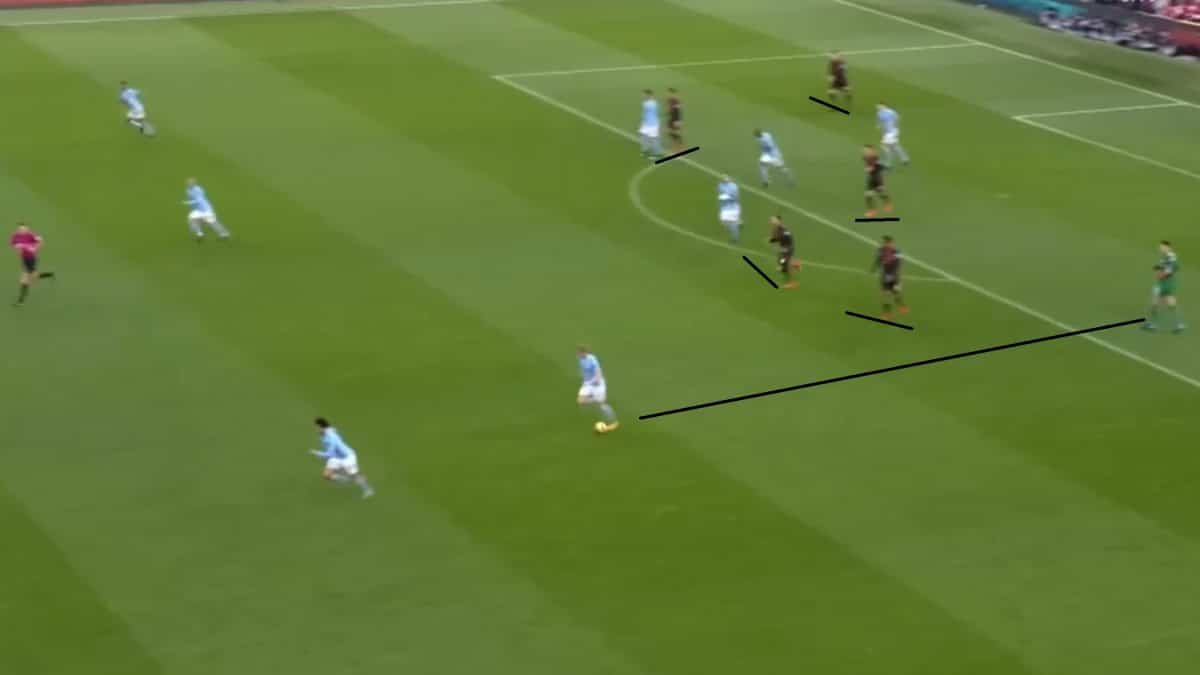 An example of this is seen in the image above, where Manchester City are able to eliminate five Arsenal players with one pass from goalkeeper Ederson following a failed Gunners attack. This is an area that Spurs should look to exploit, and with Son supporting Kane up front, they would have the pace to get in behind quickly as they did against Liverpool.

By defending slightly deeper, retaining compactness in the centre, pressing in midfield, countering at speed and getting their creative midfielders between Arsenal’s lines, Tottenham can set themselves up for an important derby victory.