Tottenham Hotspur played host to Everton at Wembley looking to make it five wins from their last six matches. Everton, winless in five, travelled down south looking to get their season back on track.

The away side had an early goal chalked offside after new signing Cenk Tosun‘s header was nodded home by Wayne Rooney in an offside position. The Turkish forward did well early on but the tide quickly turned with Heung-Min Son firing home a Serge Aurier cross to get Spurs on their way.

Harry Kane doubled the lead early on in the second half before doubling his tally to become Tottenham's all-time record scorer in the Premier League. Christian Eriksen fired home a superb fourth to put the cherry on top.

Spurs are now level with Liverpool on 44 points and just three points behind third placed Chelsea. Everton, despite their good early form under Sam Allardyce, are just seven points off the relegation zone and are winless in six.

Here are five things we learned from Spurs 4-0 Everton.

Fans of The Toffees weren't thrilled when Allardyce was appointed but were prepared to forfeit easy on the eye football in return for results. Everton needed to climb the table by any means necessary. He was given their support and it paid off.

The former England manager shored up the defence and put points on the board. But, when the honeymoon period came to and end, fans started to question his tactics. Offering little offensive threat is fine when you're winning but when you're winless in five, like they were heading into the match against Spurs, it's hard to hide.

In the five winless matches they averaged just 41 per cent possession and rarely threatening going forward – averaging just one shot on target per 90 minutes.

The opposition, on the other hand, were averaging 19 shots in total and eight on target. They weren't ever dismantled but in that winless streak they averaged just 0.4 goals while conceding 1.2 per game. They went to Wembley having conceded two goals in three consecutive matches.

And early in the second half Spurs made that four consecutive games. The home side managed 20 shots in total of which seven where on target. Everton, on the other hand, managed just the three shots on target. The match followed a similar pattern to the previous five for Everton and they will have to quickly put a stop to such a rut. It's not sustainable. 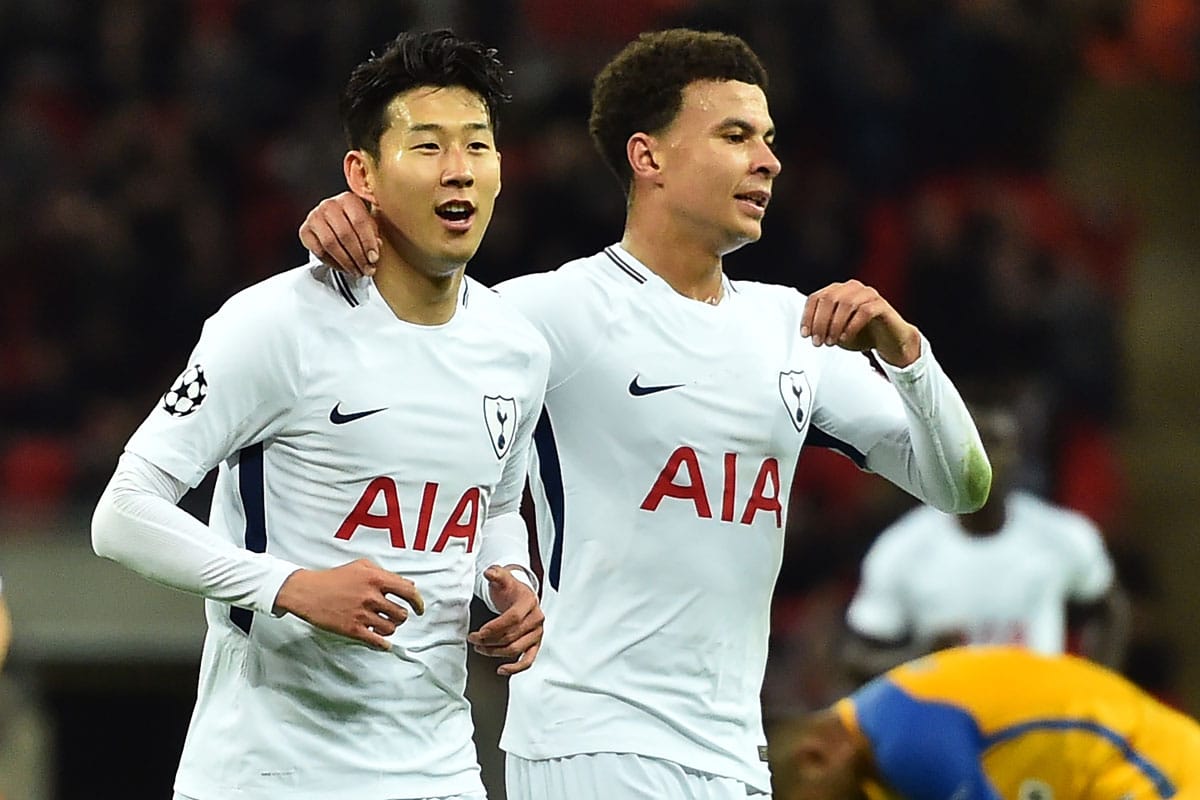 According to many, Dele Alli hasn’t been at his best this season. He’s bagged just five goals in 21 league starts and it looks highly unlikely that he’ll match last season’s tally of 18 league strikes. And his xG90 for the season is down from 0.43 to 0.31.

However, his xGA is is up from 0.13 to 0.24 and he’s averaging 0.5 more key passes this season than he was during the 2016/17 campaign – and he was by no means slacking in that metric to begin with, averaging the third highest last season with 1.53 per 90 minutes.

What we can see from these numbers are that Alli is being used as much of a creator this season. He’s scoring fewer goals but creating more chances for the team. But despite this, he’s averaging xG+xA90 of 0.55, which is his average since signing for the club.

Alli had a couples of chances to score against Everton but his left footed effort hit the side netting and another drive was blocked. But with Kane and Son not just scoring, but getting in dangerous areas on a regular basis, there's less reliance on Alli to find the back of the net with such regularity. And he appears to be enjoying his deeper role, even if others think he's failing to reach the heights of yesteryear.

His assist for the Eriksen goal was delightful.

It was a good move on Allardyce's part to start him. The Turkish forward needs to get used to the rigours of the Premier League and the best way to do that is by having him on the pitch.

Early on he looked lively. His movement caused Davinson Sanchez a lot of issues just as Football Whispers' Ryan Baldi highlighed in his in-depth scout report on the former Besiktas man.

“It is when in front of goal, however, that Tosun shows his true value. His smart and intricate movement behind the opposition’s backline is a dream for creative midfielders, and he is expert at finishing the chances presented to him, returning a 21.5 percent conversion rate last term (comparable to the 22 per cent Romelu Lukaku averaged for Everton last season).”

He was winning his fair share of aerial duels – five of the 11 he attempted. He looked like a proper Allardyce forward. But to really benefit from him being on the pitch he needs service, something Everton didn't provide him. He had just 33 touches and many of those came on the left side if the pitch, not really where you want him.

His touch looked a little rusty and he was replaced on the hour mark but the potential was there for all to see. Overall, though, a good, solid debut.

It's an issue which can be swept under the rug for now but the lack balance in the Everton midfield is an issue. Wayne Rooney may be the club's top scorer in the league this season but his inclusion pushes Gylfi Sigurdsson into a wide area. He can do a job there but he's not at his best and it's a waste to have a £45million signing shoehorned into the starting XI. 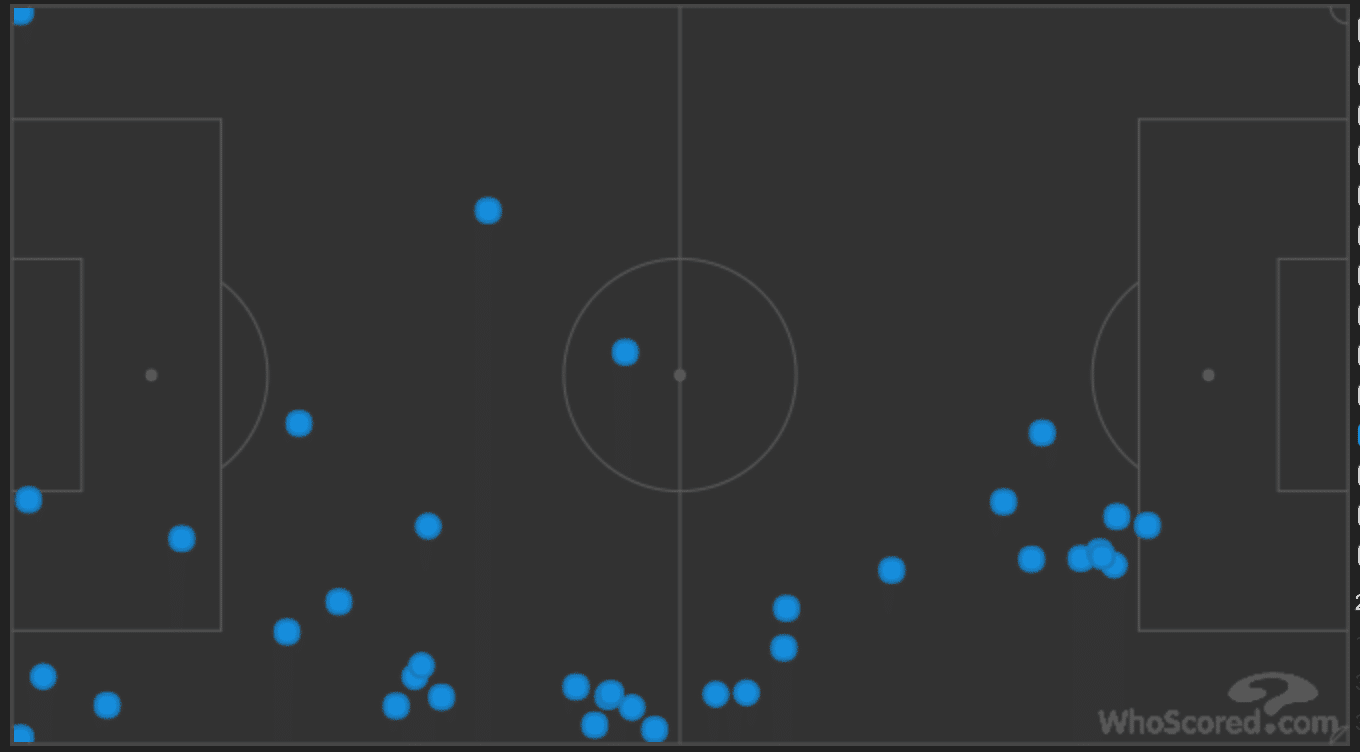 Rooney brings something to the Everton team but is it more than what Sigurdsson would offer playing centrally? The Iceland International really does have the ability to pull the strings but he can't do that on the left side of the pitch. He's shackled as you can tell from the graphic (via whoscored.com).

If Everton are able to bring Theo Walcott in during the winter window will Allardyce finally move Sigurdsson into the number 10 area and use the Arsenal attacker on the left? Pace on both flanks and a creator pulling the strings behind a target man.

Kane went into the game knowing one goal would see him become the club's joint top record goalscorer in the Premier League alongside Teddy Sheringham. Never the one to settle for anything other than top spot he scored a brace. He's now on 94 Premier League goals for the club and with recent reports suggesting he's been offered a new seven year deal, it doesn't look like he'll be stopping anytime soon.

He wasn't the only record breaker on the park today. Heung-Min Son became only the second player in the club's history to score in five consecutive home games for Spurs. It's the sort of stat which shows how important he's become to the team this season. He's always performed well but he wasn't always a guaranteed starter. Now he is and he's relishing the opportunity.