Tottenham Hotspur leapfrogged Liverpool into third position in the Premier League after a comfortable win over Arsenal on Saturday afternoon. The 1-0 scoreline didn't tell the whole story, with Mauricio Pochettino's men utterly dominant in the north London derby.

It's not an exaggeration to suggest the home side could've ran up a scoreline to truly embarrass their neighbours. Harry Kane was the difference maker, nodding home what turned out to be the winner in the 49th minute.

Defeat leaves Arsenal languishing in sixth position, five points behind Chelsea having played a game more. The Gunners face an uphill task now to claw their way back into the race for Champions League football next season and Arsène Wenger now has even more questions being directed his way.

Here are five things we learned from Spurs 1-0 Arsenal.

Spurs are the best of the rest

Pochettino's men faced Manchester United, Liverpool and Arsenal in consecutive Premier League matches. They picked up seven points and conceded just the two goals. The Argentine tactician put on a masterclass to show the rest of Europe that behind Manchester City, Spurs really are the best of the rest.

They've found their form just at the right time and are undefeated in 12 matches in all competitions. They look like the real deal, too. They'e winning ugly as often as they are comfortably. They're able to grind out results and defend resolutely but then put on an attacking clinic.

They're four points behind Man United now but have played a game more. However, you wouldn't bet against them making up that ground and finishing as runners-up, yet again.

Wenger switches it up

A criticism often levelled at Arsenal is that they’re naive. Wenger is a footballing purist and at times it’s to his team’s detriment. They’ll attack when they should defend. Push on when they should be disciplined and generally leave themselves open. They did it against Liverpool, Man City and Man United. In each game they got picked off on the counter.

Many feared the same thing would happen against Spurs but, to his credit, Wenger showed the home side respect. Despite naming a fairly attacking team his players showed restraint. They sat deep in a clear 4-5-1 formation and looked to play on the break.

They invited Spurs on to them, not that Pochettino’s men need much of an invitation to squeeze up. With Jan Vertonghen and Davinson Sanchez playing almost at the halfway line whenever they were in possession, it gave Pierre-Emerick Aubameyang a lot of space to exploit and he looked dangerous whenever the ball was played over the top.

Perhaps Wenger took a leaf out of Jürgen Klopp’s book after seeing the problems his Liverpool side caused Sanchez last week when he was isolated against Sadio Mane. The club record signing coped much better this time around but it’s clear that there was a bullseye on his back.

Arsenal struggle as an attacking unit

It's no surprise that Arsenal weren't on the same page going forward today. The front three of Aubameyang, Mesut Özil and Henrikh Mkhitaryan have played together just the once before. Flicks didn't come off, step-overs weren't judged properly and runs off the ball didn't match the passes being played.

For the neutral watching it was unfortunate. Had this fixture been played in March then it might have been a different spectacle all together. Arsenal fans shouldn't worry. The trio will find their feet.

What was worrying, though, was Wenger's tactics after he made substitutions. Mkhitaryan was replaced and Alexandre Lacazette, the victim of Arsenal's winter spending, was given an opportunity.

To accommodate his arrival on the pitch, Wenger moved Aubameyang, one of the Europe's best poachers, into a wide area. The club's record buy was wasted, as you can see from his touch map below courtesy of whoscored.com, finishing the match with just two touches in the penalty area and zero shots. 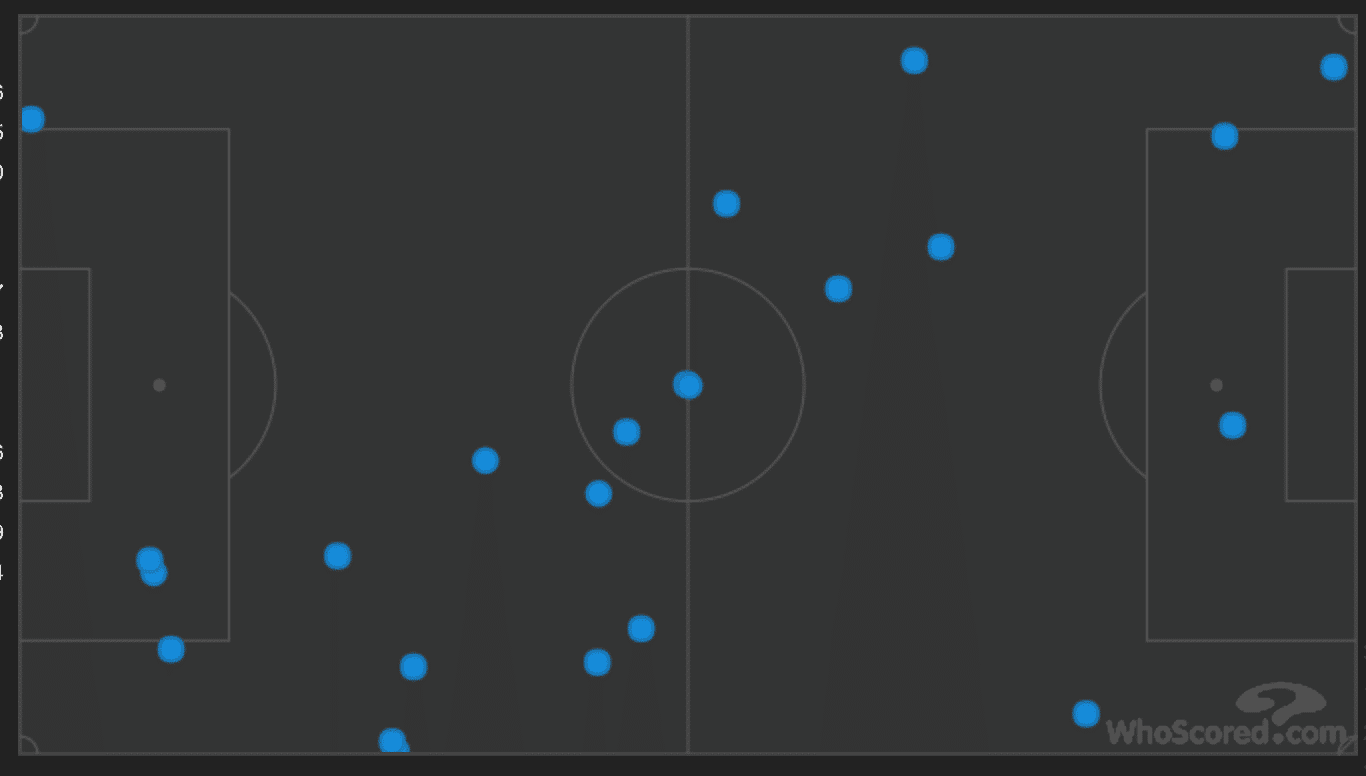 It appeared as though Wenger just wanted to get as many attacking players onto the pitch as possible without putting much thought into the functionality of his system.

It's what many had feared when the links to Aubameyang first appeared. How could he and Lacazette fit into one team? If today's showing is anything to go by it seems even Wenger doesn't have an answer just yet.

Kane is part of the elite

Arsenal fans must be sick of the sight of Kane. The goal today was the seventh he's scored in seven games against the Gunners in the Premier League. It was his 101st in the English top flight and he's now on his way to the magic 200.

Kane proved himself as a goalscorer in the past but some accused him of being a flat-track bully. Someone who boosts his stats against those lower down the table. It's never been true but he's done more than enough to quieten those doubters in the past week.

He fired home a last minute penalty against Liverpool, having missed one earlier, to snatch a point when a defeat looked on the cards. He then nodded home the winner against Arsenal to lift his side into third position. He's not single-handedly carrying Spurs but he's scoring big goals in high pressure situations on a regular basis.

He deserves to be mentioned in the same breath as Neymar. He's doing exactly what that trio are doing for their respective clubs.

Pochettino has managed to turn Wembley into a fortress. Spurs have now lost just twice in their last 21 matches there and they've beaten Borussia Dortmund, Real Madrid, Man United, Liverpool and Arsenal.

Only the two Manchester clubs have scored more home goals than Spurs, only Man City and Liverpool conceded fewer shots at home per 90 minutes and they're second when it comes to most possession in home matches.

The Spurs manager deserves a lot of credit for managing to adapt to the Wembley pitch. It's no easy feat to tweak the tactics, pressing triggers and pressing traps so that they fit a larger area on a regular basis.