Sporting Charleroi host AS Eupen in the First Division A on Saturday, July 23rd. Charleroi are aiming to kick their new campaign off with a win this weekend. Read our free predictions and find the latest odds for the fixture below in our detailed match preview.

Sporting Charleroi and AS Eupen open the new First Division A season with an encounter at Stade du Pays de Charleroi on Saturday. Read our top predictions for this weekend’s fixture below.

New Eupen boss Bernd Storck faces a baptism of fire on Saturday when he takes his new charges to Charleroi to face Sporting and the hosts are favourites to romp home to victory in the first game of the season. Sporting beat Eupen twice to nil last term, netting seven times themselves for good measure and in front of an expectant crowd at the Stade du Pays de Charleroi, they can be backed with confidence to prevail again.

Charleroi put AS Eupen to the sword with ease in last season’s tussles between the teams, running up a fine 7-0 aggregate score against the strugglers. Sporting eventually finished nine places above Eupen in the final First Division A standings, further highlighting the gap in class between the teams. That divide should be evident again on Saturday, where we recommend backing Sporting to hit over 1.5 goals for their third straight meeting with Eupen.

Top Betting Odds and Stats for Sporting Charleroi vs AS Eupen

Check out our collection of the best stats for Saturday’s game below alongside a tool to help you choose the best odds.

Read all of the injury updates and team news for Saturday’s First Division A contest between Sporting Charleroi and AS Eupen below.

Sporting Charleroi made some interesting moves over the summer, with Vakoun Ioussof Bayo joining from Gent, Jonas Bager moving from Union SG, Julien Maggiotti wrangled from Stade Lavallois and Daan Heymans brought in from Venezia.

AS Eupen made eight signings in the summer with the number of exits at the club in double figures, and with a new manager (Bernd Storck) in the dugout, there is a big new era feel. Eupen finished just two places clear of the drop zone last term, though their chances will be helped by a clean injury record this weekend.

Sporting Charleroi vs AS Eupen Coverage and Frequently Asked Questions 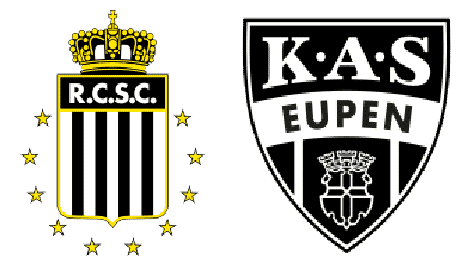 The Stade du Pays de Charleroi will host Sporting Charleroi vs AS Eupen.

Which club are favourites to win this weekend?

The bookmakers have priced Sporting Charleroi as clear favourites to win.