These are all accurate assessments of Ole Gunnar Solskjær's Champions League debut as United's interim boss. It did not go well for the Norwegian who, up to Tuesday night, had enjoyed a dream two months in the Old Trafford hot seat.

A run of 11 wins from 12 games combined with Paul Pogba's encouraging form and news Neymar and Edinson Cavani would be sitting the first leg out generated a great deal of excitement prior to Paris Saint-Germain rolling into Manchester.

That excitement was soon replaced by acceptance, an acceptance that, despite their resurgence on the domestic front, the Red Devils are a long way off the level required to go deep in the Champions League knockout rounds.

Ahead of the game, Solskjær spoke of the need for a fast start. Instead, his players produced a flat, listless performance which gradually grew into something more desperate (even Solskjær looked a defeated man, his glum countenance a world away from Thomas Tuchel, who ran the gamut of touchline theatrics).

PSG, in stark contrast, settled impressively and, after going two goals up, stroked the ball around Old Trafford in a manner not too dissimilar to Juventus in October.

That night, an Argentine – Paulo Dybala – proved the matchwinner. This time, his compatriot Ángel Di María, a player derided in this corner of the world, proved his class, his two assists helping to establish a two-goal cushion for the visitors which, while not unassailable, looks beyond United's reach on last night's evidence.

Di María, who was met, unsurprisingly, with a barrage of abuse from the more vociferous corners of the home support, seemed to revel in his role as pantomime villain. United have already come up against a former employer in Cristiano Ronaldo in this campaign, but this felt different.

Having been shoved – unnecessarily, it should be noted – by Ashley Young into the barriers that surround the pitch, Di María found a second wind, teeing up Presnel Kimpembe for the opener from a corner before masterfully supplying the killer pass for Kylian Mbappé's goal to really knock the stuffing out of the hosts.

It wasn't a game for the ages by any stretch yet strangely brimming with subplots. There was Di María. There was Mbappé, once again, reaffirming his status as the planet's most extraordinary young talent.

His pace is frightening!

A clinical finish as well… His 23rd goal this season ? pic.twitter.com/PehkjPLIcj

There was Paul Pogba who, having been stalked relentlessly by Marquinhos all night, ended his own participation in this tie with a rash challenge on Dani Alves which led to the Frenchman's second yellow card. There was Alexis Sánchez who, given the opportunity to light up a big European night after Jesse Lingard's injury, “wandered around like a soul in pain,” as L'Équipe put it.

But perhaps the least headline-friendly takeaway was the most telling; that, for all their glitzy star power, PSG are a finely-tuned unit, one which finally looks adequately equipped for a tilt at the European crown.

This organisation was evident through the spine of the French champions, with Thiago Silva, Marquinhos and a not-fully-fit Marco Verratti all enjoying thoroughly productive evenings.

Gianluigi Buffon – barely called into action by a toothless United attack – is, at 41, the elder statesman of this PSG side. But he is not the leader. For that is Silva, now 34 and a veteran of these ties, who once again offered a timely reminder of his status as an elite centre-back. The Brazilian, composed and prudent in possession, was the calming influence when Kimpembe looked to be unsettled.

He is one of those players who relishes his role as leader. It's safe to assume Silva anticipated a greater challenge from Marcus Rashford who, for the first time under Solskjær's watch, was made to look lightweight. However, as the young Englishman struggled to assert himself in the game, Silva swatted away countless crosses from Young and Luke Shaw.

And if Silva is the type of centre-back United lack, Marquinhos and Verratti lay bare the superiority of PSG's midfield. Marquinhos, yet another accomplished Brazilian among Les Parisiens' ranks, marked Pogba out of the game.

Naturally a centre-back, the 24-year-old barely put a foot wrong, showing pace, strength and positional discipline in his battle with United's star man. Pogba, increasingly frustrated, finally lost it when he raked Alves' leg with his studs after a weak pass from Shaw.

Marquinhos, the anti-Pogba, was unflappable, even offering his own eerily convincing impersonation of the Frenchman when, having brushed past Nemanja Matić, sent Di Maria through on goal with a heat-seeking diagonal pass.

Then there was Verratti. The Italian showed no signs of weariness after having only returned from a three-week layoff with an ankle problem at the weekend. Tuchel predicted they would get 60 minutes out of the 26-year-old; they got 75.

Silva was the best player on the night but Verratti, too, was hugely impressive, constantly setting PSG's attacks in motion with his passing and while he drew the ire of the Stretford End faithful with the manner in which he went to ground under challenges, it wasn't simulation, but the ability to draw fouls and relieve the pressure on his defenders. He was fouled four times, more than any other player on the pitch. 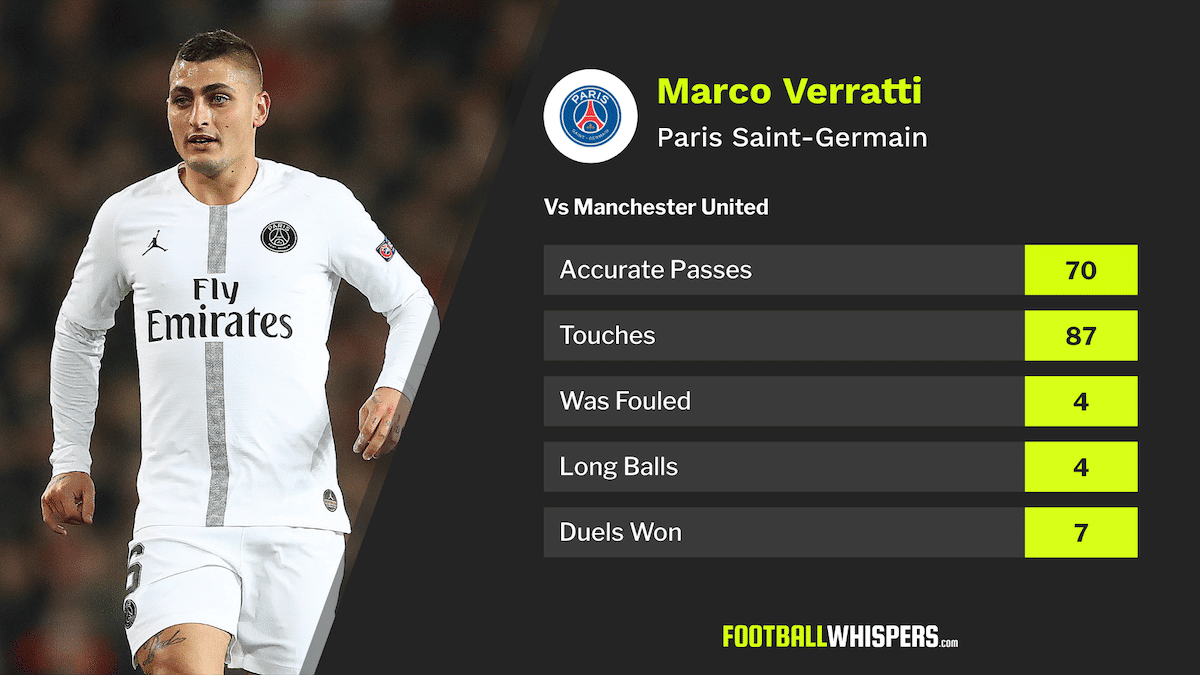 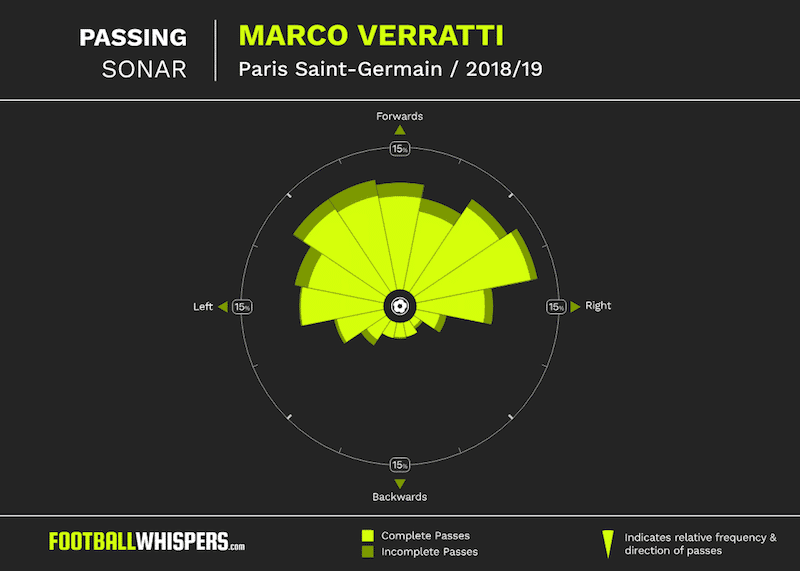 He was a constant option in midfield; always free, always spinning away into space and always picking the right pass – he completed the most, with 70.

His intelligence, technique and reading of the game was a cut above that of United's midfielders and, while there can be no question that Matić and Ander Herrera have flourished under Solskjær, the Norwegian's first defeat should have showed the club's hierarchy the kind of operator required to succeed at this level.

If this is what PSG can do without Neymar, Cavani and Thomas Meunier, United can only hope they have not recovered. Or maybe Solskjær hopes they do return in time because, one thing's for sure; if United come up against the same 11 men playing the same composed brand of football in Paris on March 6, their involvement in this season's Champions League is as good as done.