The 2021/22 Serie A campaign hasn't started very well for either Spezia or Genoa and the pair go head-to-head on Tuesday night. Both teams sit in the bottom four as things stand and are separated by a single point and both will view this game as a great opportunity to return to winning ways.

Here are our predictions for Spezia vs Genoa.

We're predicting that both teams will score in this game as that has been the case in five of the last six meetings between the pair in all competitions. Five of Spezia's and Genoa's last six outings in Serie A have also ended with both teams getting on the scoreboard, so you can see just why we're not backing either team to keep a clean sheet on Tuesday.

As well as both teams scoring, we're also expecting at least three goals to be scored when Spezia play host to Genoa. Five of the last six encounters between the two clubs have witnessed at least three goals scored and each of Spezia's and five of Genoa's last six matches have also produced over 2.5 goals, so there is no reason to expect a low-scoring match between the pair this week.

As far as a final scoreline is concerned, we're backing this game to end in a 2-2 draw. Wins have been hard for both clubs to come by this season and a stalemate seems the most likely outcome on Tuesday. Spezia have dropped points in four of their last five league games, including two of their last three at home, while Genoa have drawn three of their last five matches, two of which ended 2-2 and one which finished 3-3.

Spezia have 7pts on the board from their opening 9 matches following a narrow defeat away at Sampdoria. An own goal from Gyasi set the tone of the evening at the Stadio Comunale Luigi Ferraris. Sampdoria went in at the break two goals to the good thanks to an effort from Candreva and although Verde pulled a goal back for Spezia late on, it was virtually the last kick of the game.

Genoa also lost away from home last time out, going down 3-2 at Torino. That result leaves Tuesday's guests sitting second from bottom in the table with 6pts to their name. Torino went 2-0 up on Friday evening but Genoa did manage to pull a goal back through Right in the 69th-minute, only for Brekalo to restore the host's two-goal advantage. With 10-minutes left on the clock, Caicedo made it 3-2 but Genoa couldn't carve out an equaliser.

Spezia: the hosts could be without Sher, Kiwior, Adou, Bourabia, Sala, Sena, Reca, Erlic, Agudelo & Colley on Tuesday through injury. 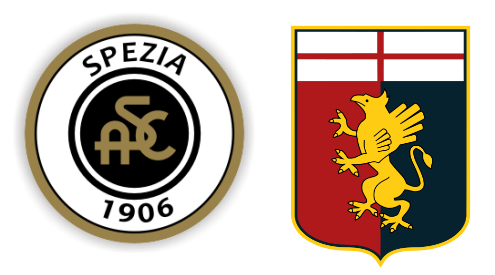