Liverpool moved into pole position in their Champions League group on Tuesday night thanks to a 7-0 rout of Maribor. Away in Slovenia, Jürgen Klopp’s side did what was necessary and then some, taking top spot in Group E at the halfway stage.

They were helped in their move up the table by Spartak Moscow, but the Russian outfit could end up being their nemesis. The two teams have already met, drawing 1-1 in Moscow back in September, and there is reason to believe the return clash at Anfield may be an uncomfortable affair for the home side.

Spartak were top seeds for this season’s Champions League having won the Russian Premier League in 2016/17.

They finished seven points clear of CSKA Moscow and eight clear of Zenit St Petersburg to win the title to earn their status on the continent.

They have so far lived up their seeding, remaining undefeated in their opening three group games. And, worryingly for Liverpool, they appear to be growing as the campaign goes on. After drawing their first two games, including Maribor away, they won 5-1 at home to Sevilla on Tuesday.

That result came as a shock to most. Spartak were seen by many as destined to finish third behind their English and Spanish rivals, but the latest evidence suggests they could potentially beat both to top spot.

Defensively, Spartak set up in a rough 4-4-1-1 structure. Their wingers, Quincy Promes and Aleksandr Samedov, dropped back into the midfield line, while Ivelin Popov supported Luiz Adriano. Their coverage was zonal and oriented towards the opposition’s possession; they generally moved as a unit looking to shut down the Sevilla ball-player’s forward passing options.

While the still below depicts a situation that is not open play, it acts as a reasonable example of their approach, as they aim to cut off options from an opposition throw-in. 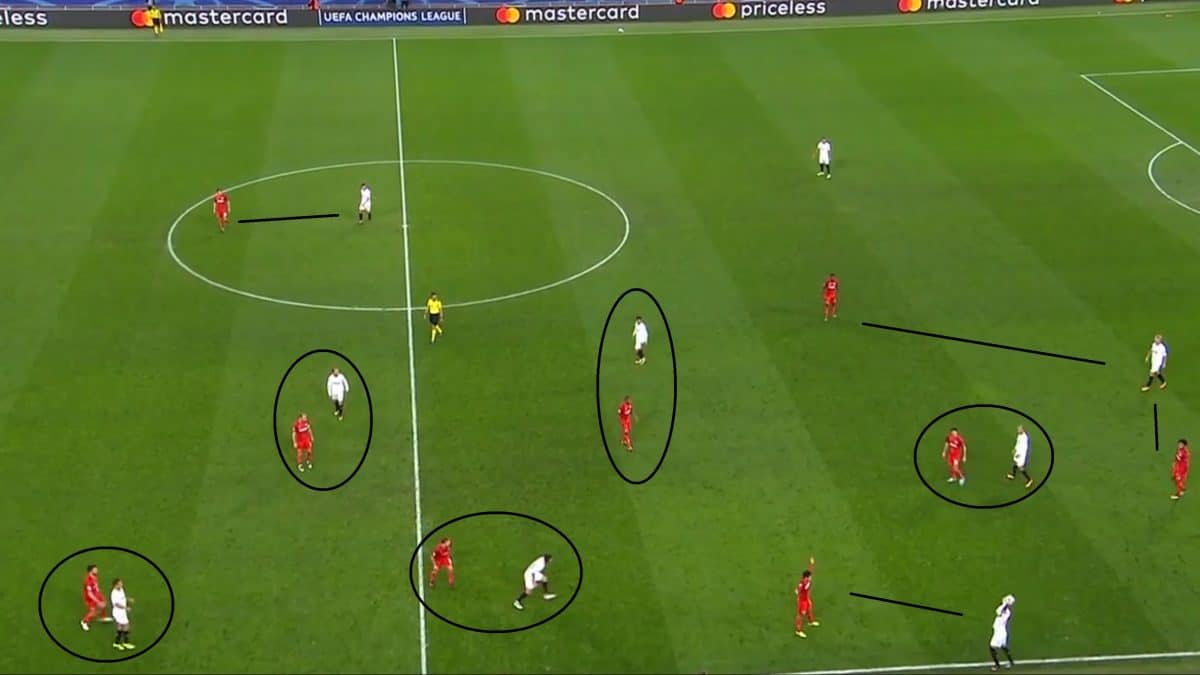 Spartak defended in a mid-block. This meant that, while their defensive line was not high (around the halfway line), it was also not specifically low (around their own penalty area).

They operated a middle press, only really challenging when the opposition entered their half, but applied fairly low intensity as they had a clear emphasis on retaining their own shape. 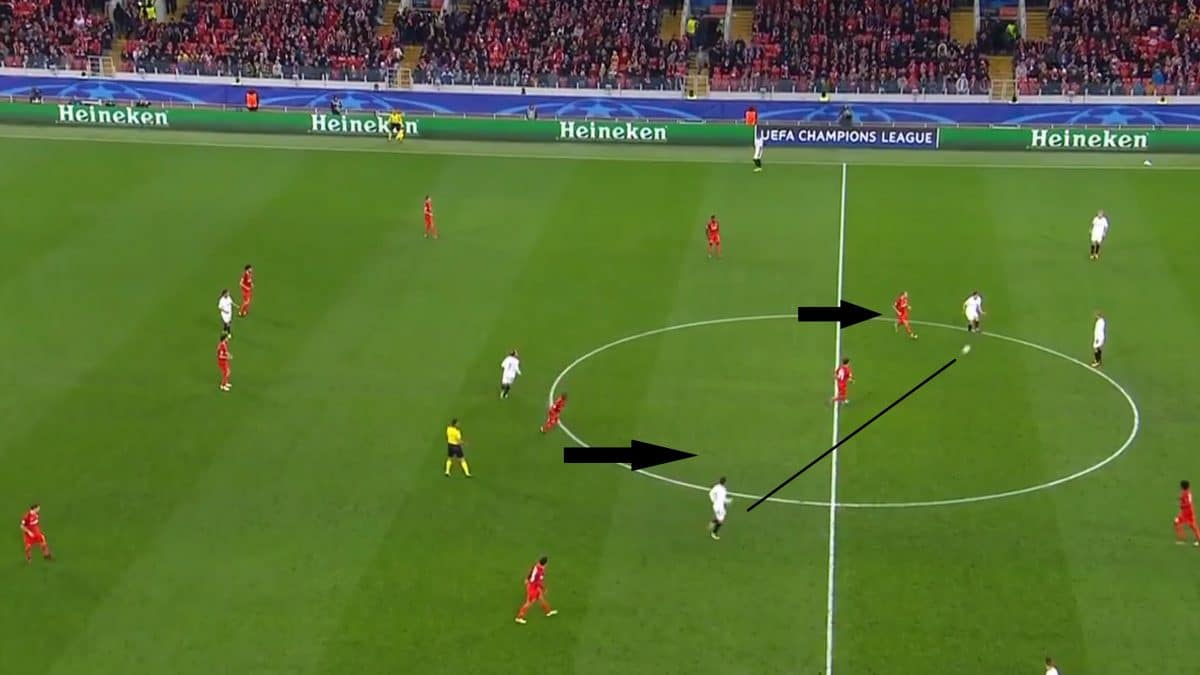 This emphasis on shape was aided by extremely high levels of vertical compactness. This involved maintaining very short distances between the lines. As shown in the graphic below, the gap between Spartak’s defence and midfield, and between midfield and attack, was small.

The Russian side’s compact defensive shape made it difficult for their opposition to play through the pressure – they almost always had good, if not immediate, access to the Sevilla ball receiver. As such, any poor control, wayward pass or miscommunication by the visitors was quickly seized upon to force a turnover. 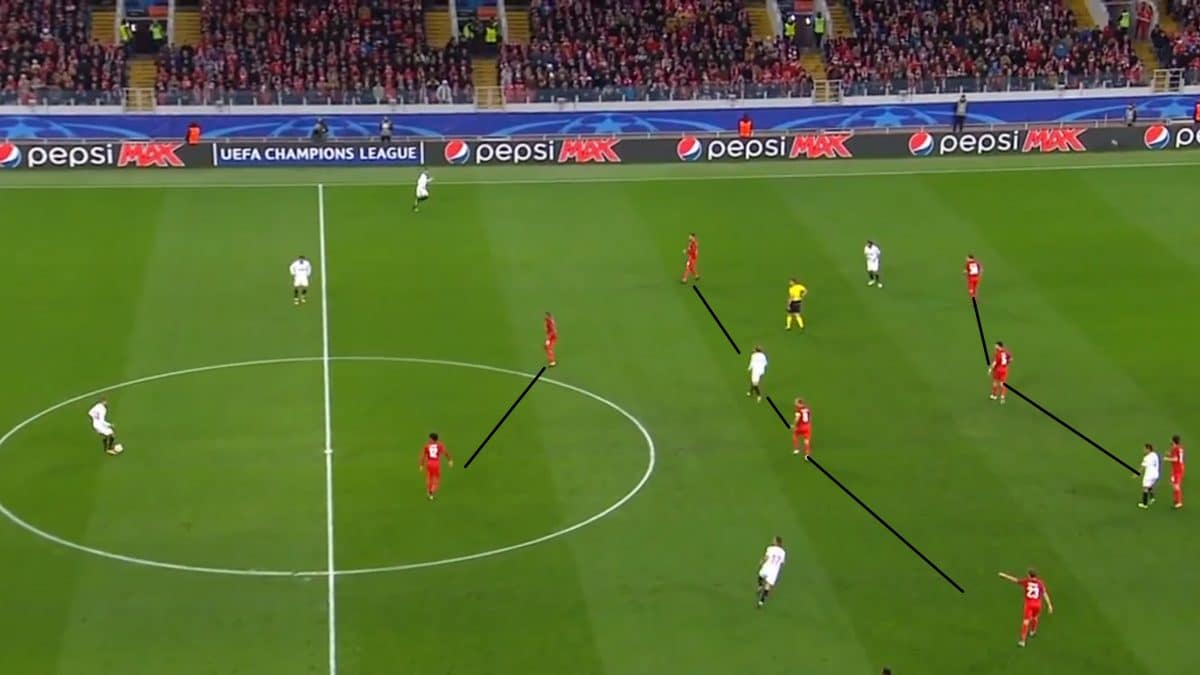 Spartak’s compactness also proved beneficial in attacking transitions. Rather than opting for what many deem a typical counter-attack – a direct ball forward, usually over the top, into space, for the attack to chase – they used the short distances between players to exchange passes and build more structured counter-attacks.

By exchanging passes between players within a short space, they were able to evade pressure while sucking Sevilla players in. This in turn created space to be exploited elsewhere. After their short, quick passing exchanges, the Russian champions would then open up by playing the ball into a team-mate occupying the open space.

This is shown below. Here, four Spartak players draw pressure from their opponents immediately after a turnover of possession. Rather than go long, they retain the ball between them before playing it to Popov, circled in grey, who is free and has plenty of space to attack. 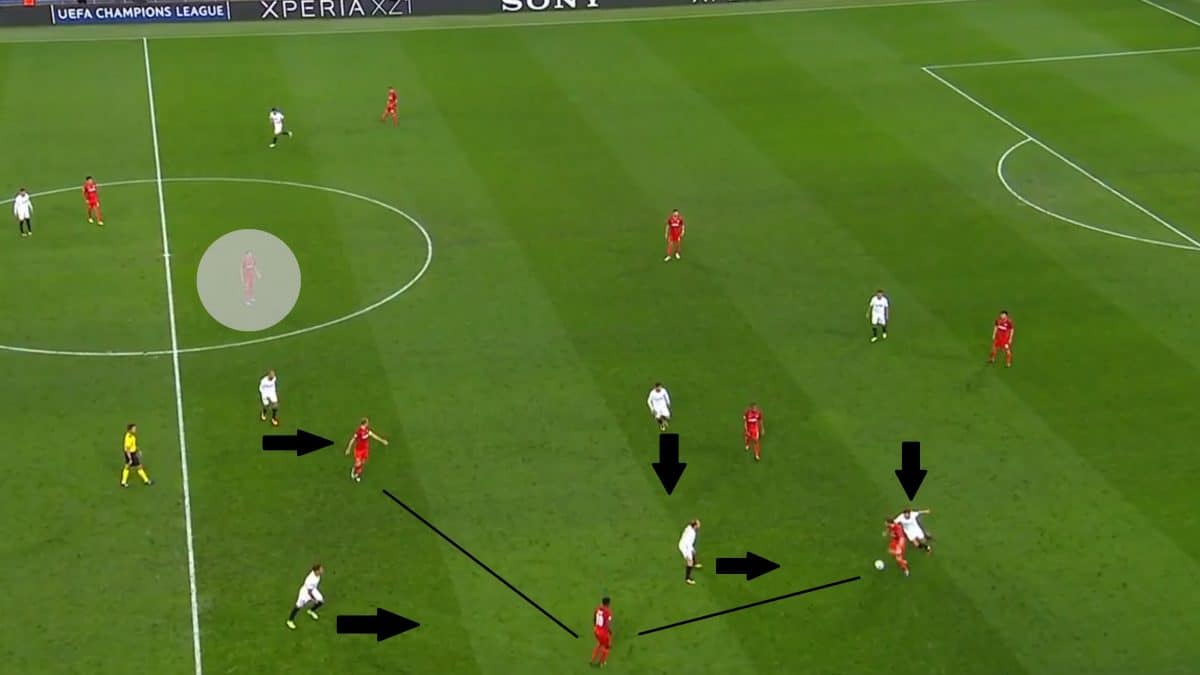 A compact defensive unit and a dangerously cohesive counter-attacking force, Spartak are composed and organised in these two phases of play. In the attacking phase they are not quite so effective, but in Adriano they do have a good focal point.

The Brazilian is not a clinical finisher, but he is strong and fast. He can hold up a direct ball well before laying it off to a team-mate, or he can play close to the last man, look to get in-behind the opposition defence and create space behind for the wingers to utilise. As shown below, the wide players do look to drift infield and offer forward passes through pressure. 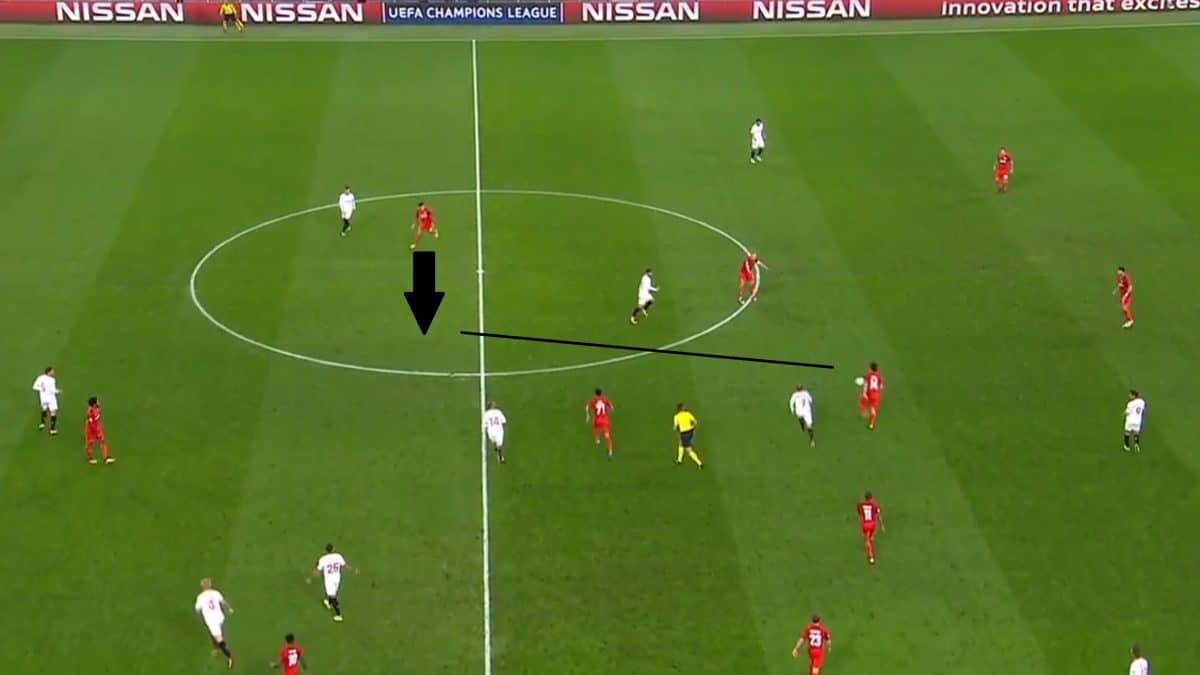 CONTE’S OLD ASSISTANT: THE MAN BEHIND THE MAGIC

Spartak started the 2017/18 campaign poorly, struggling domestically and failing to win either of their opening Champions League group games. The draw with Maribor was particularly galling. But their win over Sevilla evidenced a side who appear to be closing in on top form once again.

They are now unbeaten since August 19, winning five and drawing five of their last ten games. Strikingly, they have now won three in a row, and their sensational European victory on Tuesday night should be enough to convince that they could feasibly make it to the knockout stages of the continent’s elite club competition.

The man behind their success if Massimo Carrera, who was previously assistant to Chelsea manager Antonio Conte. Considering this connection, as well as the fact he was an Italian defender whose best years came in the halcyon days of the 1990s, it’s no surprise his Spartak are a well-structured defensive and counter-attacking side.

The 53-year-old worked with Conte at Juventus before joining him in the Italian national team staff with the same role. He learned a lot from the experience, as he readily admitted in a recent interview with ESPN FC.

“It doesn't really upset me to be referred to as ‘Antonio Conte's former assistant' or ‘the second Conte,' as I have huge respect for Antonio,” he said. “But let's say I'm not the second Conte: I'm the first Carrera.”

Liverpool will rightly feel confident following on from their 7-0 thrashing of Maribor, but their current status as Champions League group stage leaders will not be easily maintained.

Spartak are a resurgent force and, with their defensive and counter-attacking nous, could cause serious problems for Klopp’s men at Anfield in the final round of Group E fixtures.