Volendam arrive here off the back of an absolute mauling from PSV; can they bounce back with a decent display here? Find out with our Sparta Rotterdam vs Volendam match preview with free tips, predictions and odds mentioned along the way.

Sparta to win the game

Volendam are coming off a humiliating 7:1 defeat at the hands of PSV Eindhoven; they've lost four of their last seven games in all competitions, with a win and two draws. To be fair, Sparta Rotterdam have won just one of four league games so far; however, they are in better shape than tonight's opponents, having won seven of their last 10 matches across all competitions. Also, Sparta Rotterdam have had Volendam's number in recent years; as they have five wins and a draw in the last six meetings between these teams. Considering Sparta Rotterdam have the advantage of playing at home, they should take all the points here.

Meetings between these teams usually feature lots of goals, especially at this stadium; these teams scored at least three goals in five of Volendam's last seven trips to the Het Kasteel. In the same vein, Volendam have had one of the worst defences in the Eredivisie; they've allowed 13 goals in four matches, only one team has conceded more goals this season. Because of their inability to keep the goals out, Volendam's games tend to be high-scoring games; as five of their last six matches saw at least three goals scored. Taking everything into account, we believe that these teams will score up to three goals between them.

Will Volendam show grit and fight after 7:1 thrashing?

These two sides have identical records after four games of the season but, despite that, the mood in each camp will be very different. Rotterdam won their previous match to lift spirits whilst Volendam lost 7:1 meaning their morale will be on the floor. It will be interesting to see how those factors play a role in this game.

Sparta Rotterdam's backup goalkeeper Tim Coremans injured his shoulder while training, and will not be available for selection; however, this should not bother the team too much, as first-choice goalkeeper Nick Olij is primed to start. Koki Saito is also unavailable for this match.

Dean James and Achraf Douiri returned from their respective injuries in the last seven days, and should both see some action here; on the other hand, Josh Flint, Oskar Buur and Calvin Twight are still recovering from injuries they sustained last season.

A quickfire FAQ on Sparta Rotterdam vs Volendam 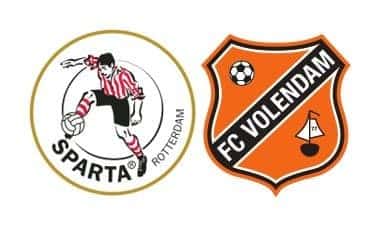