Spain’s defeat to Russia in the World Cup round of 16 has shocked the world. Before the tournament, even Russians were pessimistic about their team’s quality.

Whether influenced by the upheaval of losing coach Julen Lopetegui two days before their first match or not, Spain were not on form. They didn’t have a shot until just before half-time.

What exactly was going on? 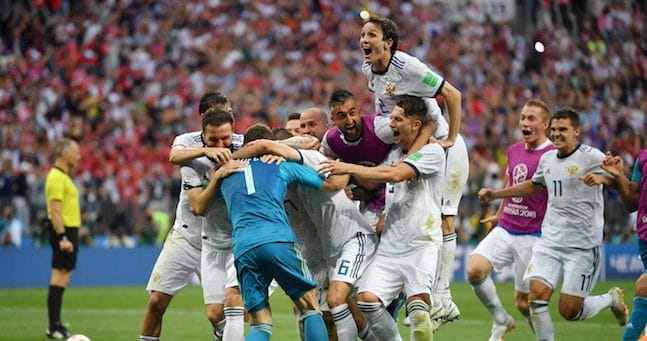 The reign of Spain falls in the Moscow rain

Spain were anaemic in just about every way in the first half. They struggled to get into the final third, then struggled to create shots when they were there, and then even those chances weren’t great.

Teams usually make around a third of their completed passes in the final third of the pitch, although this can vary quite a lot – but in the first half-hour Spain’s rate was just 14 percent and with no shots to show for it. It was everything that tiki-taka isn’t supposed to be, possession without an aim.

Russia’s equaliser in the 41st minute proved to be a bit of a wake-up call. Between Artem Dzyuba’s penalty and the half-time whistle, Spain took their first three shots of the match.

They continued this newfound awakeness in the fifteen minutes after half-time, taking another four. They were getting to the final third with more of their passes as well (28 percent), turning the pressure up on Russia.

And then it stopped, for a while.

They took no shots between 60 and 75 minutes, and just 17 percent of their passes were in the final third. Whatever was said at half-time had clearly worn off, and Russia brought on fresh legs in Denis Cheryshev and Fedor Smolov to help defend from the front.

But from then on, Spain began to crank the machine back up. They got five shots from 75 to 90 minutes, and as Russia dropped back they could get further up the pitch.

The below graph shows Spain’s passes compared to their final third passes throughout the match – the dotted red line is what one-third of the total pass count would be, a general baseline for how much you might expect Spain to be there. If below that line, Spain are being kept out or are unable to find their way through. 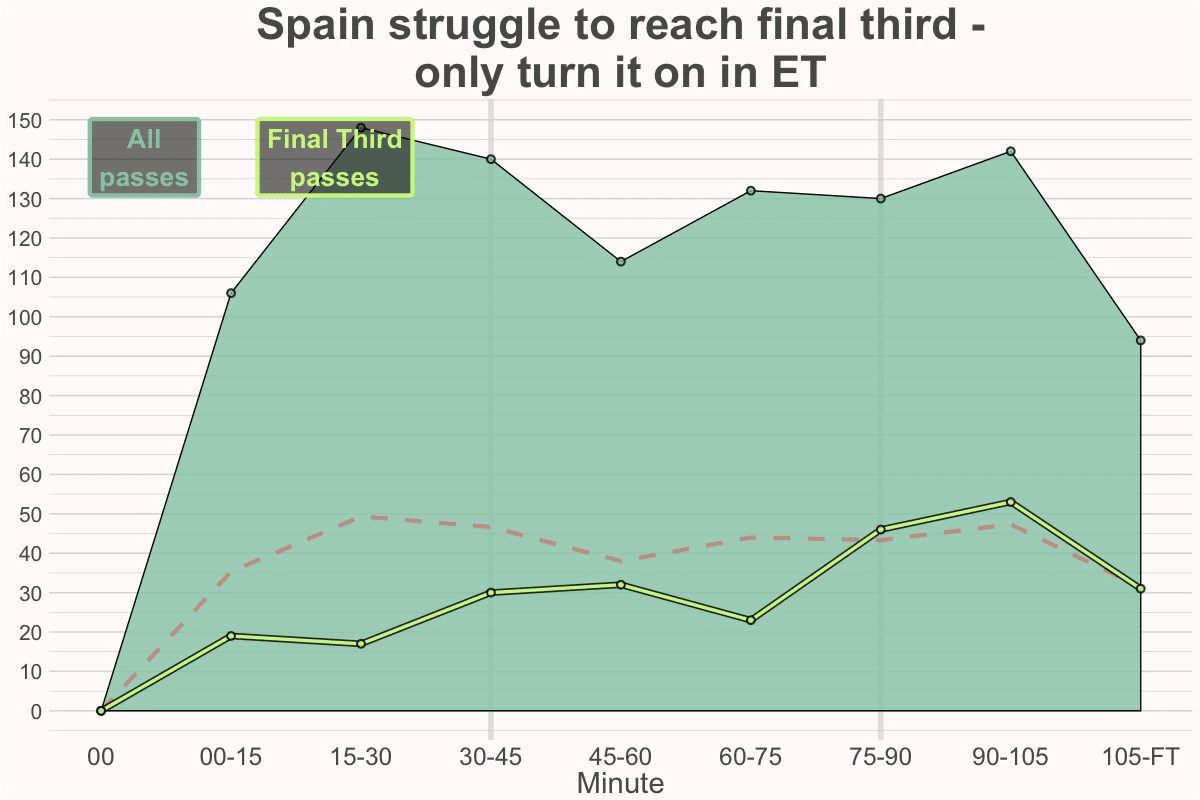 Both sides’ desperation was clear in extra time.

Spain took 12 shots – as many as they had during the entire 90 minutes of normal time. Russia completed just eight passes in the final third, to Spain’s 84, and made 11 clearances in 15 minutes in the first half of extra time.

Tug of war is won – or drawn

How much of this change was Spain getting better and how much was it Russia retreating further into their half to try and defend the draw and take the match to penalties?

Much of it was down to the way Russia began to open up as their legs tired. There was a period in extra time where Spain were finding incisive passes through the Russian midfield in a way that they hadn't done all match, before the hosts resolved the issue by dropping deeper and more compact.

La Roja were bizarrely focussed on their left-flank, with Nacho (and later Carvajal) either extremely unpopular, not offering enough width, or possibly both. 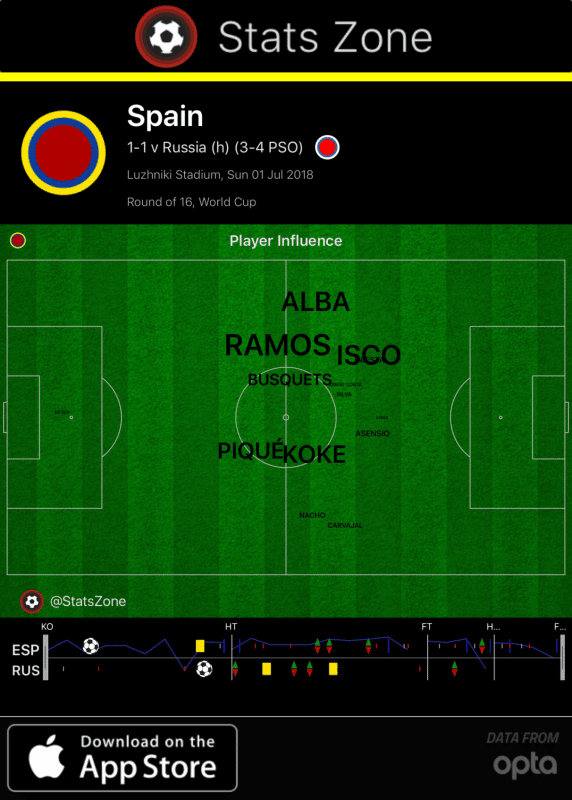 For whatever reason, Spain were too static and predictable in possession, although Russia also deserve credit for defending well. They stayed in their shape, they didn’t allow large gaps to be made, although they did it with the help of 19 fouls during the match (Spain made just five).

It’s not that Spain didn’t create any chances. Thirteen (13!) of their players took at least one shot during the game – that’s every outfield player apart from lonely Nacho.

Their Expected Goals tally stood at 2.14, by Football Whispers’ model, and taking into account shot placement it went up to 3.19. And that’s not including Ignashevich’s own goal.

These models quite possibly overrate the quality of chances that Spain got late on, when there will have been far more Russian bodies and pressure around the ball than there usually are on shots. Even so, Spain could reasonably have expected to score from at least one of their chances.

But that’s not the way football works. On the balance of what they eventually ended up creating, Spain may have deserved to win – but they were so extraordinarily tepid in the first half, and only inconsistently improved in the second, that luck going the way of the Russians feels fair.

Spain squandered their talent. And that injustice deserved the injustice of their chances not going in.