There was a time when, following Gary Neville’s international retirement, right-back was a problem position for England. Twelve years on that remains the case, but for altogether different reasons.

Whereas once there was no heir to the former Manchester United defender, with Chris Smalling and Phil Jones among those who failed to make the spot their own, Three Lions boss Gareth Southgate has a plethora of options for the No.2 shirt.

His most recent squad selection, for 2020 European Championship qualifiers against Bulgaria and Kosovo, left many scratching their heads.

Southgate named three right-sided full-backs in Trent Alexander-Arnold, Kieran Trippier and Aaron Wan-Bissaka. Yet Kyle Walker who – according to the eye test at least – is in the form of his Manchester City career, was surprisingly omitted.

Three has since become two with Wan-Bissaka withdrawing due to a back complaint.

Speaking at the time, Southgate explained why he'd left Walker out, saying: “We tracked [Wan-Bissaka] very closely last year and thought he had an outstanding season last season, but he should stay with the under-21 group. 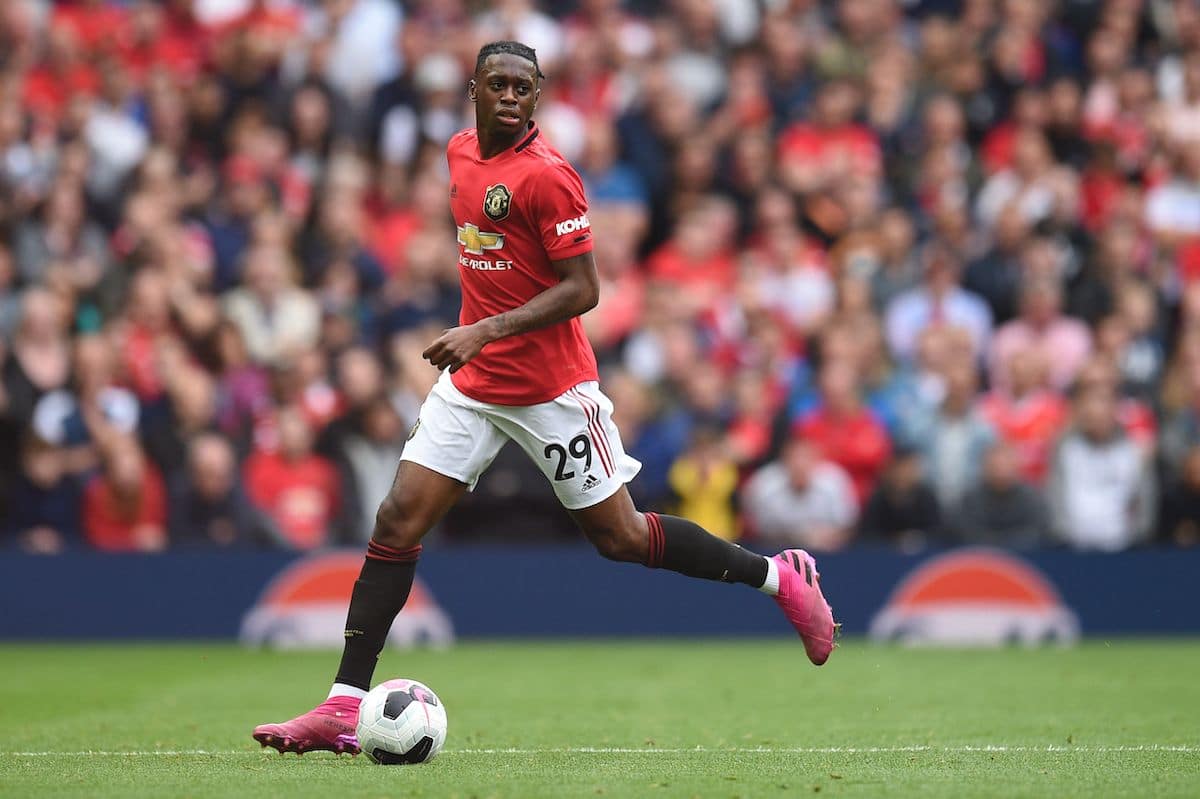 “He’s adapted very well to a high profile move with the intensity and pressure and we are really looking at him and Trent [Alexander-Arndold].

“We also want to reintegrate Kieran Trippier into the group to know he’s still on our radar. It’s an area of the pitch where we have a lot of quality. Kyle started the season really well so I explained the situation to him. They all have different strengths.”

And therein lies the most pertinent point. All four are different players and that allows Southgate to pick horses for courses. On the basis Bulgaria (ranked 60th in the world) and Kosovo (120th) shouldn't cause the Three Lions too many problems over the next week, England should pick an attacking side.

Using Football Whispers' exclusive Player Persona tool (below) we can see the stylistic difference between the quartet based on their statistical output for the 2019/20 season far – albeit only four rounds of Premier League fixtures have been played and just three in LaLiga. 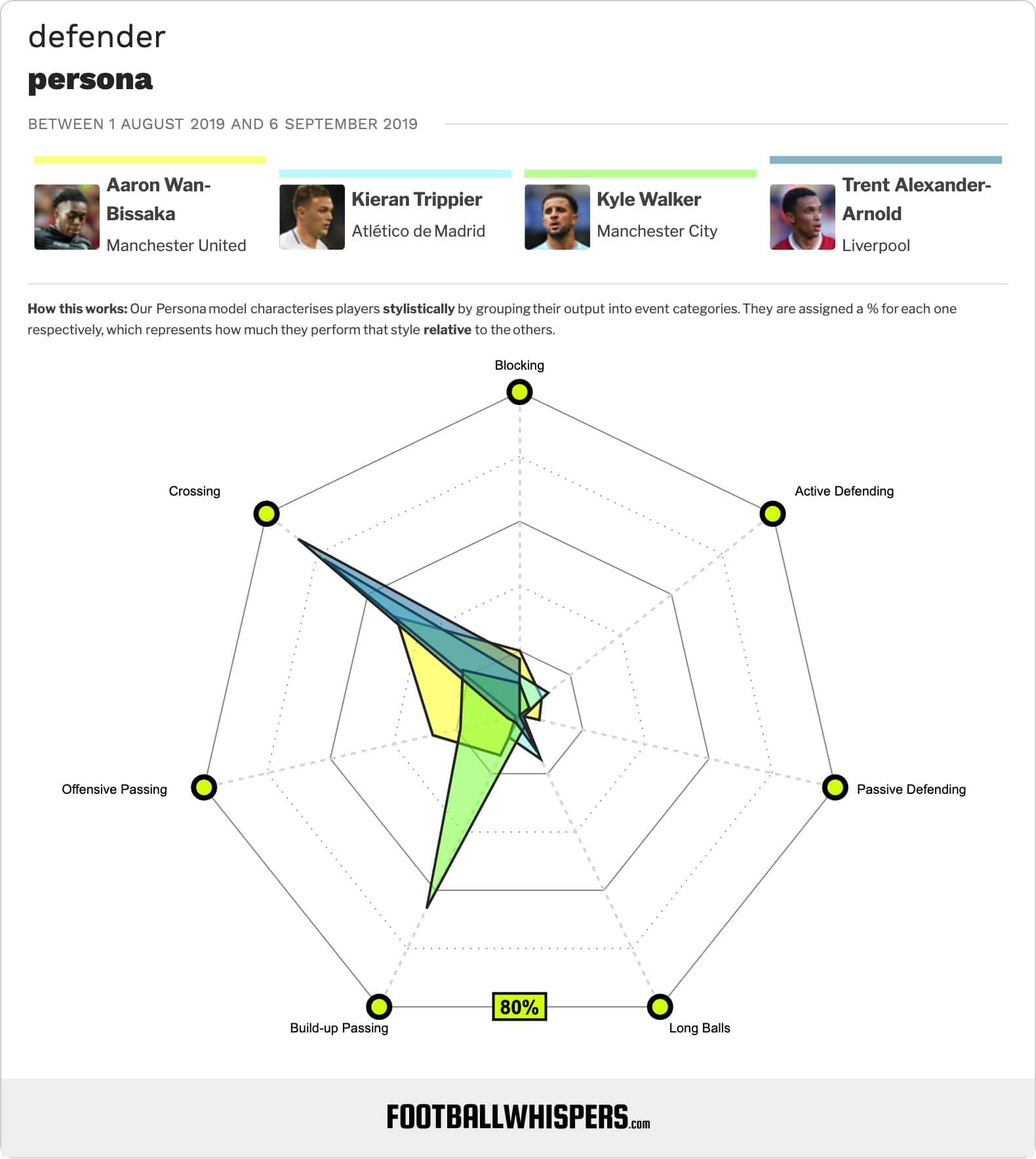 As one might expect, the Persona chart shows Trippier and Alexander-Arnold to be prolific crossers of the ball. The former has completed 0.67 crosses per 90 this term while the latter has managed 1.25 even though in terms of volume, Walker and Wan-Bissaka have attempted more with 40 apiece.

Interestingly, Wan-Bissaka does have more success carrying the ball, completing 1.75 dribbles per 90 – none of his England peers manage one. The Manchester United new-boy also comes out on top for forward passes with an average of 24.75 per 90.

Comparing their four respective heatmaps makes for interesting viewing too. Alexander-Arnold and Trippier are the most progressive with the Liverpool defender frequently moving inside to central areas. 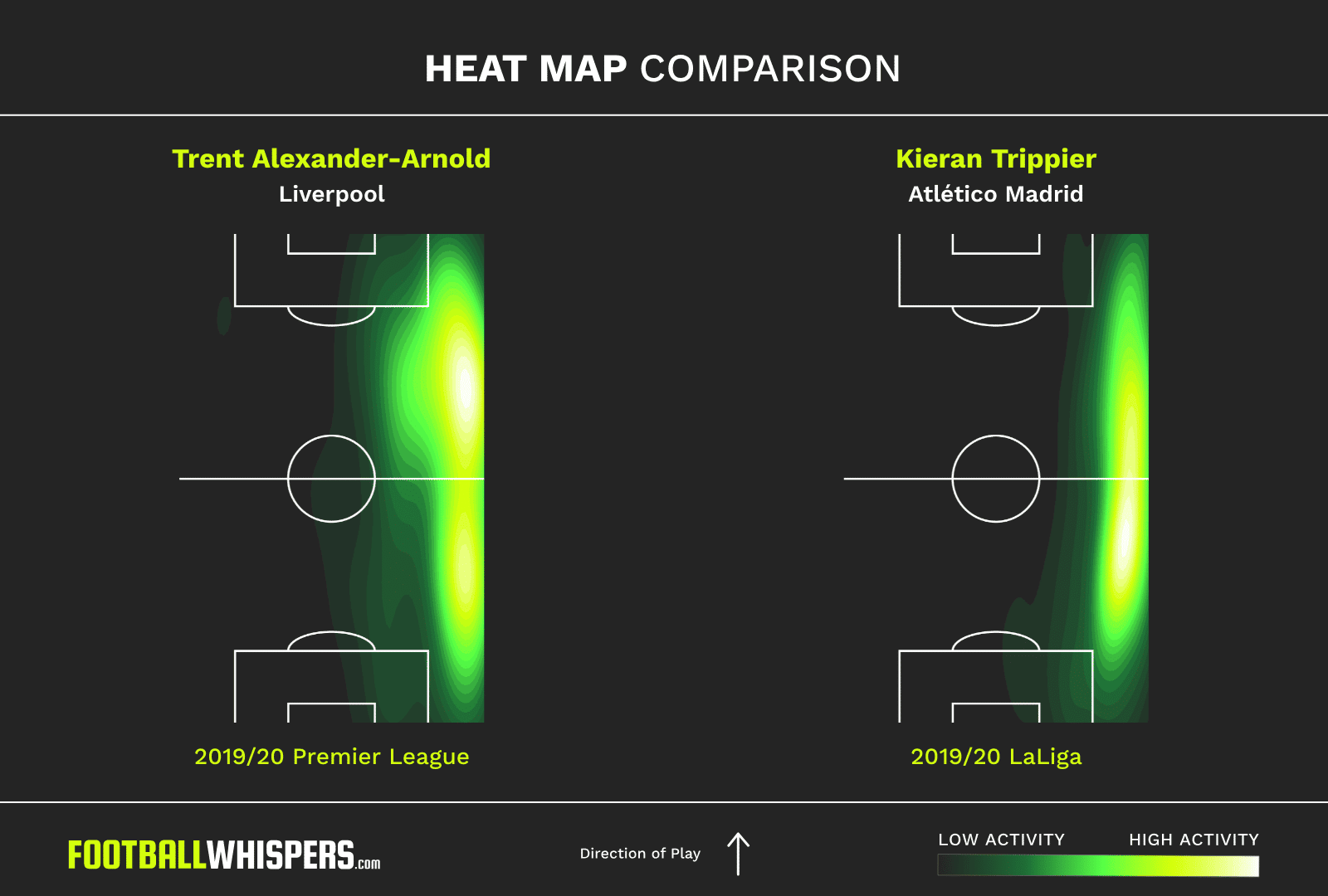 Meanwhile, Walker's highest volume of activity actually takes place in his own defensive third while the majority of his work stops short of the penalty area.

That can be attributed to the way Pep Guardiola likes his full-backs to operate, coming inside to flood the midfield and create overloads. His role doesn't demand he charges to the byline in the way others do.

Perhaps the biggest surprise is how much work Wan-Bissaka does going forward. The former Crystal Palace defender has been lauded for his tackling numbers and, though there is more to that statistic than meets the eye, it is interesting and perhaps surprising to see how high up the field he operates too. 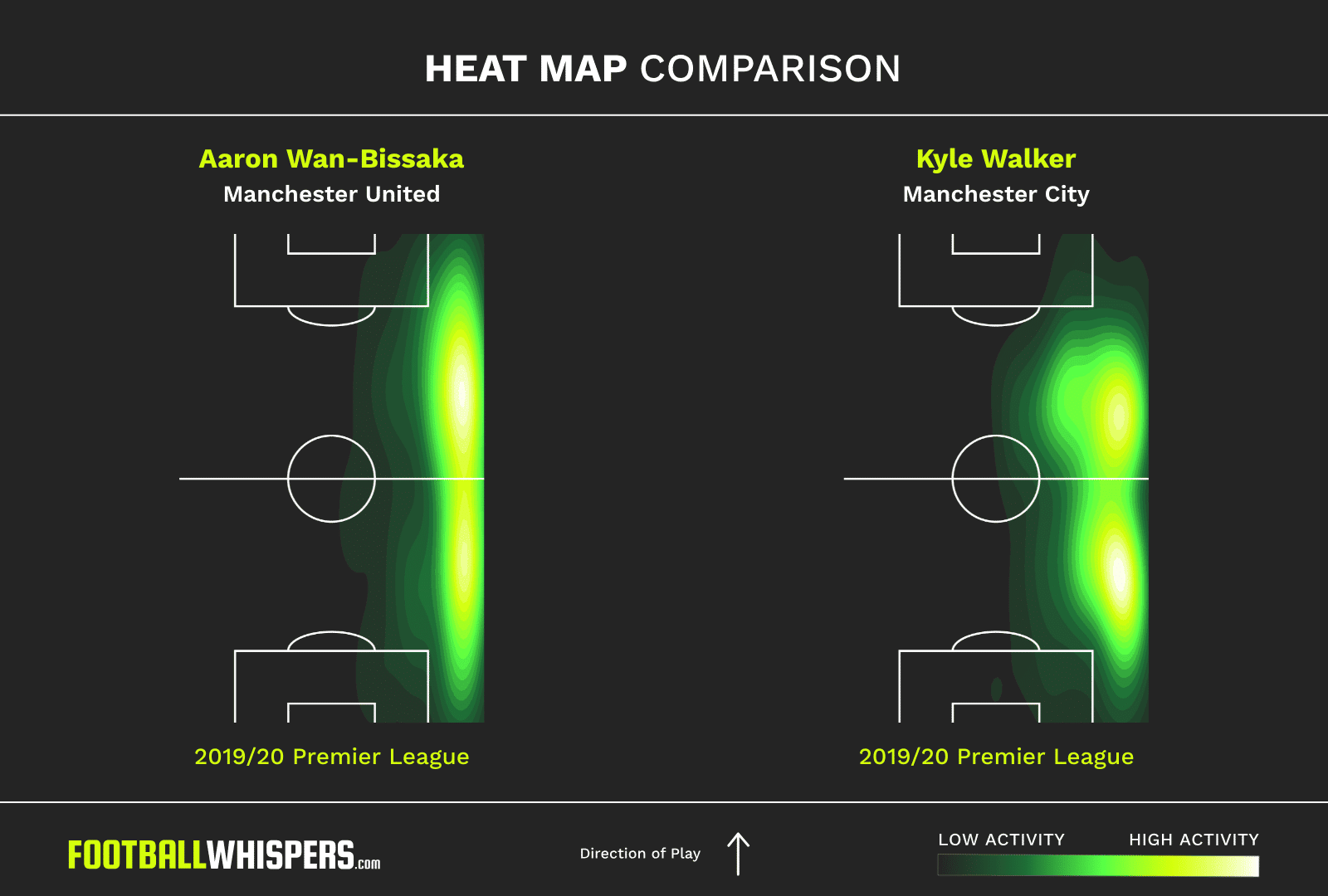 Southgate's job is to pick the players best suited to the task at hand. England can expect Bulgaria and Kosovo to be deep and compact with very little attacking intent, inviting the Three Lions onto them in the hope of spoiling their way to a draw. Or at least keeping the score down in the Kosovans' case.

On that basis, a full-back like Trippier who tends to reach a certain point and swing in a cross will enjoy a limited impact. At its best, the former Tottenham Hotspur defender's delivery is excellent. But it can also be scattergun and defenders love nothing more than heading away routine crosses.

Therefore, England need players who are going to probe and disrupt their opponents' defences by probing and working their way inside. Those players are Walker and Alexander-Arnold. 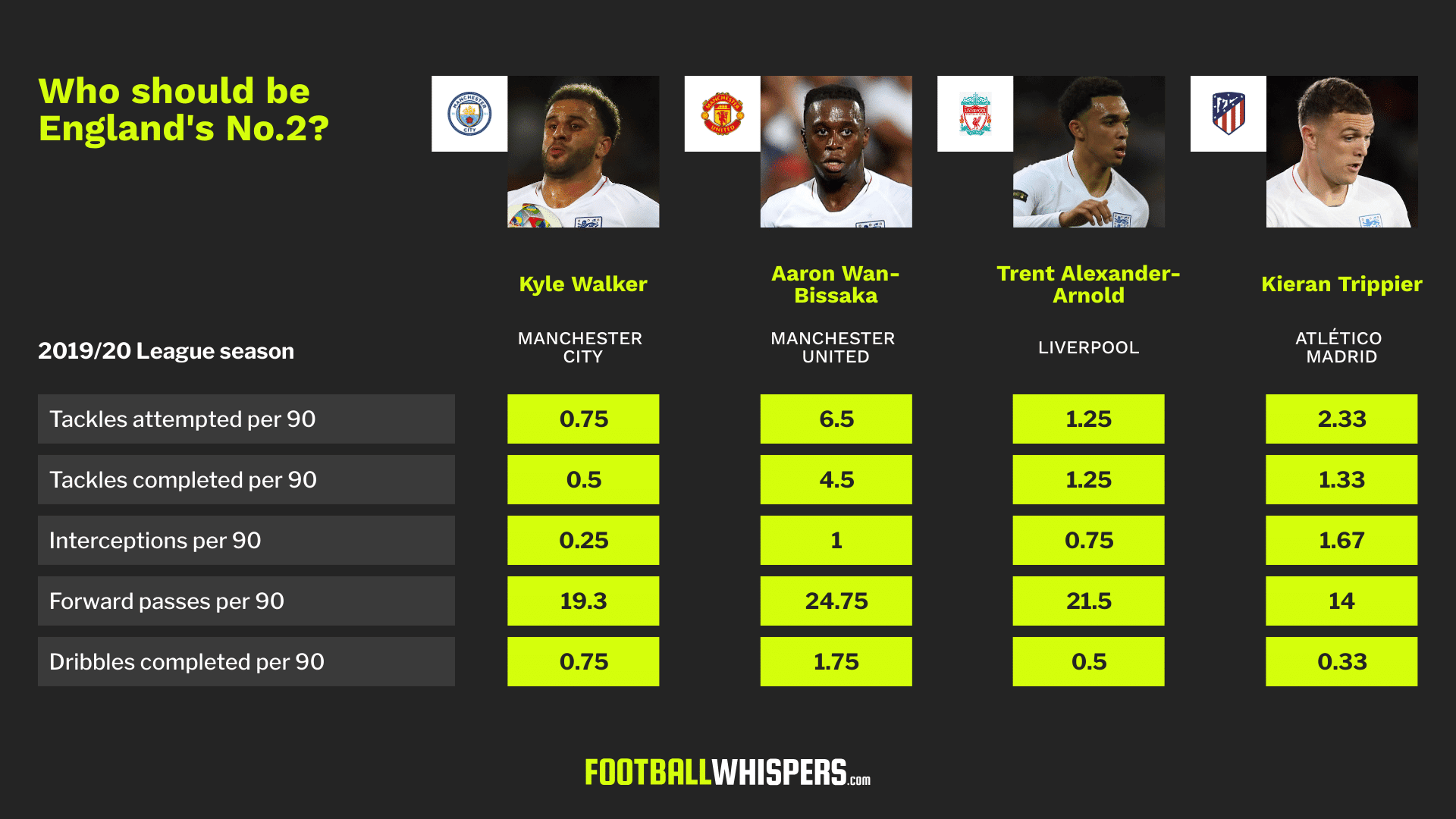 There is, however, a counter-argument which says England will win these two fixtures at a canter regardless of who gets the nod at right-back. Southgate's side will expect to dominate possession and territory so having another weapon in each of the full-back positions could be useful.

Another argurment is that Walker (with 48 caps) and Trippier (16 caps) are England's most experienced options. There's little Southgate can learn about either in games against lowly nations.

Instead, these two fixtures might be a gentle introduction to international football for Alexander-Arnold (six caps).

Above all, though, Southgate has not closed the door on Walker. That would be a truly foolish thing to do. The Manchester City defender is up against it given he is the veteran at 29, but too often England managers have bottled leaving players out for fear of upsetting them when they simply want to take a look at someone else.

That is the boat Walker finds himself in. He'll be back in the squad before too long, in the same way Trippier has been reinstated this time. These are the dilemmas of being England manager – the clichéd nice headache to have.