Only two players have scored more Premier League goals than James Ward-Prowse in 2019: Sergio Agüero and Sadio Mané. This is a remarkable upturn in goal scoring form for a player who had never previously surpassed five goals in a season.

But Ward-Prowse, since the arrival of Ralph Hasenhüttl at Southampton, appears to be a player reborn. He had not scored a goal all season prior to the appointment of the German coach; now he cannot stop finding the net.

The goals that have caught the eye, of course, have been the free kicks. Ward-Prowse scored a superb set-piece in last weekend’s impressive victory over Tottenham, which kept Southampton two points clear of the bottom three.

As free-kick takers go, there are few more accomplished than the Saints midfielder. At Old Trafford, too, he left David de Gea helpless with a curling effort into the top corner.

Ward-Prowse, though, has always been unerringly accurate from dead-ball situations. He has always been technically proficient, a tidy, cultured player with the ability to pick out a pass.

What he has lacked, until recently, is a cutting edge. It has always seemed that Ward-Prowse’s clear potential might go unfulfilled, that he might struggle to take the step to the next level.

Few such doubts remain now. Under the guidance of Hasenhüttl, Ward-Prowse is playing with an aggression and intensity that has not been seen before. He has been given license to push forward, to make late runs into the box, and the result has been a dramatic increase in goals.

Take, for example, Ward-Prowse’s goal at Fulham in early January. The midfielder was lurking on the edge of the box as Southampton broke forward and was in the right place to convert when the ball fell at his feet. It was a goal he almost certainly would not have been in a position to score a few weeks prior.

The stats are evidence of the freedom Ward-Prowse has been given in the final third: his xG per 90 has increased, under Hasenhüttl, from 0.04 to 0.26. He is taking an average of 1.81 touches in the opposition box per 90, up from 1.35. And he is shooting almost twice as often: 1.65 attempts per 90 compared with 0.9 previously.

Finally, Ward-Prowse appears to have been given a role in which he can thrive, a role that brings out his best attributes and allows him to impact games with far more consistency. It is easy to forget, too, that he is still only 24.

This is Ward-Prowse’s seventh full season at Southampton. It seems an age ago that he made his breakthrough as a highly-rated teenager, when the consensus was that he would be a future regular in the England setup.

His first and only cap for the national team came two years ago, in March 2017. Since then, he has almost been the forgotten man, popping up with the occasional free kick to remind people of his ability. 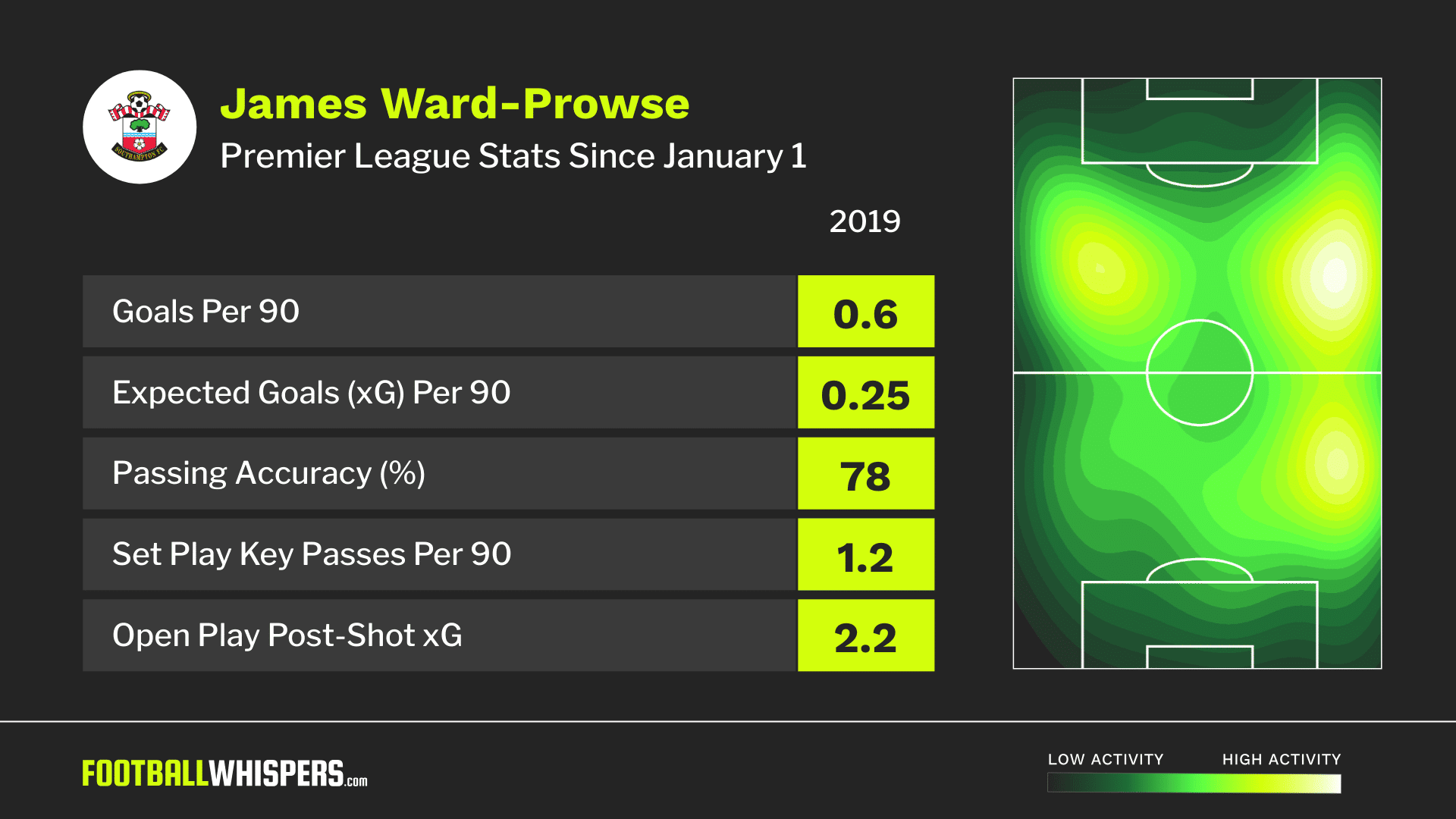 That is no longer the case. Ward-Prowse is beginning to earn widespread plaudits, and there have been suggestions that he will soon be back in contention for a place in Gareth Southgate’s England squad.

Clearly, Ward-Prowse has benefited from the energy instilled by his new manager. Hasenhüttl is a coach who emphasises the importance of pressing from the front and transitioning quickly and directly in attack.

And the German has brought the best out of Ward-Prowse with and without the ball. He has, remarkably, covered more distance – 123.7 kilometres – than any other player in the Premier League this year. Even Burnley’s tireless Jack Cork cannot match those numbers.

It is no surprise, then, that Ward-Prowse has been touted for a potential return to the England setup. If he continues to perform as he has since the turn of the year, it will be difficult for Southgate to ignore him.

“His technique is gorgeous,” Hasenhüttl said of Ward-Prowse after the Spurs victory. “It's not so nice for the goalkeeper to stand there while Prowsey steps up to take a free-kick, but he made a fantastic game, he was everywhere fighting for every ball.”

For Southampton, more such displays from Ward-Prowse could be the key to climbing away from the relegation zone.