Southampton slipped to yet another away defeat at the weekend and now sit 4pts behind Tuesday's guests Crystal Palace in the Premier League table. Roy Hodgson's men claimed a win against Sheff Utd and sit 13th in the table heading into the final four games of the campaign.

Read on for our full match preview and prediction for Southampton vs Crystal Palace in the Premier League.

Under 2.5 goals have been produced in each of the last five league meetings between Southampton and Crystal Palace, including the Eagles 1-0 win at Selhurst Park in September. Three of the Saint's last four fixtures and four of Crystal Palace's last six outings have also featured fewer than three goals, so you can see just why we're expecting a tight and tense 90-minutes on Tuesday.

Crystal Palace have picked up a win and two draws from their last four encounters with Southampton, with that victory coming when the two sides locked horns for this season's reverse league fixture back in September. The Eagles have had a lot of tough fixtures of late but have still managed to claim two wins and a draw from their last six league games. Southampton have dropped points in each of their last five outings in league and cup, adding further weight to our prediction for a Palace double chance.

Each of the last two meetings between Southampton and Crystal Palace at St. Mary's have ended in 1-1 draws. Southampton's last home game against Leicester ended all square at one goal apiece and Crystal Palace recently claimed a 1-1 draw from their trip to Goodison Park in the Premier League, so you can see why we're edging towards a 1-1 draw on Tuesday night.

Key Stats and Markets for Southampton vs Crystal Palace

Crystal Palace could claim the domestic double over Southampton this Tuesday

Southampton suffered a 2-0 defeat at Liverpool on Saturday but despite remaining on 37pts, the Saints look certain to avoid a relegation battle thanks to the poor overall performances of West Brom and Fulham this season. Southampton's current form has been concerning though with the club failing to win any of their last five outings in league and cup. Smallbone and Bertrand will miss Tuesday's clash through injury and there remain concerns ver Romeu and Ings but Minamino will return to the squad after not being allowed to face his parent club, Liverpool, at the weekend.

Crystal Palace will likely be without the services of Sakho, Ferguson, Wickham and McArthur for the trip to the South Coast but centre-back Tomkins could return to the squad following injury. The eagles have been putting in some decent performances against some of the top clubs in this season's Premier League but they haven't won any of those matches. However, a good performance against relegated Sheff Utd on Saturday produced 3pts for Roy's boys and moved Crystal Palace onto 41pts for the campaign, evening producing a rare goal for Benteke. If the Eagles can put in another performance like that, then they stand a very good chance of leaving St Mary's with at least a point to show for their efforts, and possibly more. 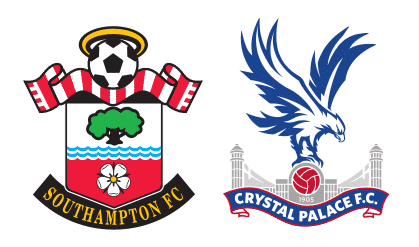