For several years Southampton were known for their savvy nature in the transfer window.

The Hampshire club would buy low, or promote from within, develop talent and then sell at astronomical fee  – usually to Liverpool.

Along the way Saints fans got to enjoy exciting football from one of the best-run clubs in the division. However, the last couple of years has seen that model falter and Southampton have struggled as a result.

While the club can just about afford to have the odd off year in the transfer market – they were battling relegation for much of last term – Mark Hughes will be well aware he won’t be afforded as much sympathy and patience from the fans if this summer's recruits don't prove successful.

Last season Southampton's defensive record wasn't as poor as other sides battling for survival. They conceded 56 goals in 38 games, a far better tally than Stoke City, who were relegated, and West Ham United, who weren't.

That total was, however, on an equal footing with Swansea City and West Bromwich Albion, the other two clubs who dropped into the Championship last May.

At the heart of that porous back line was a seemingly incapable ability to win headers. Last term Southampton were 11th for aerial duels attempted per 90 (40.44), yet they were bottom for percentage of aerial duels won (40.29 per cent).

And that is where new central defender Jannik Vestergaard comes in. Since the towering defender arrived at St Mary’s from Borussia Mönchengladbach, Southampton have shot up to eighth in the Premier League table when it comes to the percentage of aerial duels won (45.1 per cent).

It's a significant rise and while Vestergaard will not solely be responsible for the increase, he is winning an average of four aerial duels per 90, a total only bettered by 12 other defenders in the Premier League.

In midfield, Hughes can also turn to new faces for old problems. The Southampton manager has clearly taken to Mohamed Elyounoussi, the winger signed from FC Basel in the summer, and for the most part the 24-year-old has done his best to repay the confidence shown in him.

While Elyounoussi has yet to notch up a goal or an assist in five games for the Saints, his pace and dribbling has been a constant nuisance for opposing defences. 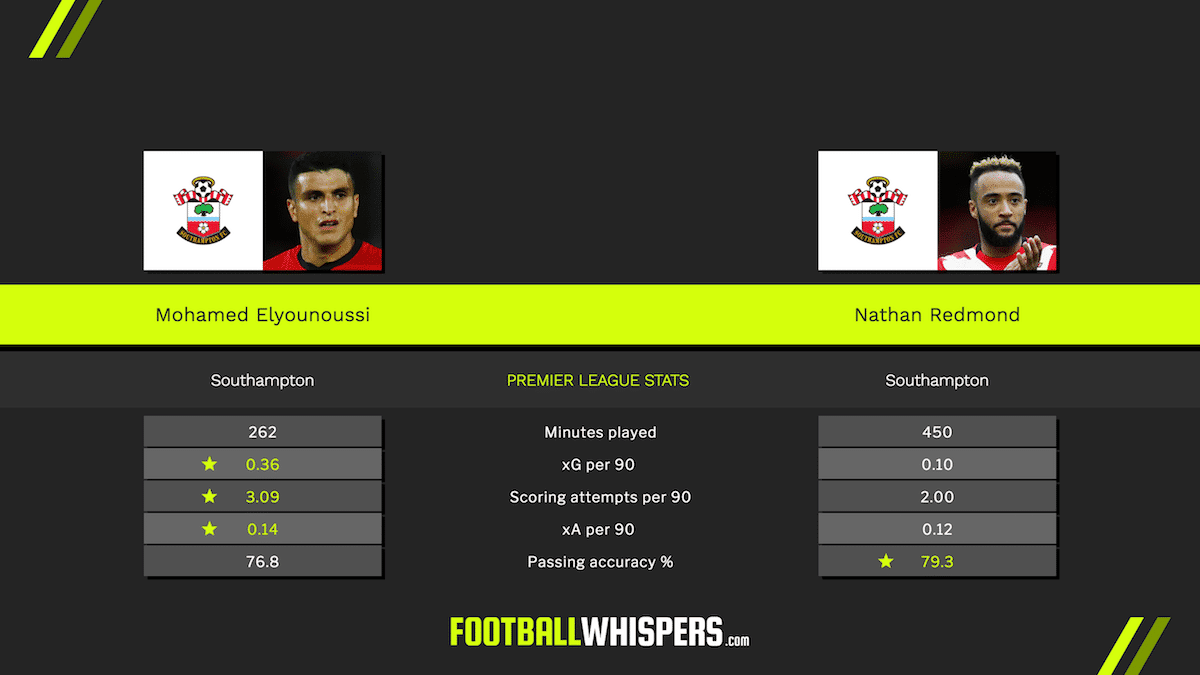 At such a young age and with no prior experience in English football, it’s perfectly understandable to assume the Norwegian international can only get better for his new side. And in doing so help Hughes and the club back up the league table.

Finally we get to the front line, which was undoubtedly the biggest problem in Southampton's side last season.  The Saints only scored 37 goals in 38 Premier League games during the 2017/18 campagin and if Hughes was to drag this club back to mid-table, at the very least, he needed to change things up.

Southampton tried to tackle this problem with a loan move for Liverpool’s Danny Ings. Although the 26-year-old may not be the sexiest signing in world football, he arrived at St Mary’s with a solid Premier League goalscoring record and so far this season we’ve seen exactly that from the English forward.

In just five games, Ings has already picked up three goals and leads the club’s goals per 90 minutes leaderboard with effectively 0.73 goals per game. In comparison, Charlie Austin’s average in the Premier League last term was 0.56, Manolo Gabbiadini’s was lower at 0.38 and Shane Long’s stood at a rather pitiful 0.11 per 90 minutes.

Now Ings isn't going to continue that strike rate and score 30 goals this season, but Hughes will undoubtedly be encouraged by the manner in which he has hit the ground running.

And to have another, proven goalscorer in the team to put pressure on the likes of Austin and Gabbiadini will undoubtedly bolster a Southampton front line that can use all the help it can get.