It was a familiar scene. An England keeper collapsed in his net, beaten too easily by an effort he ought to have repelled. That sentence could refer to West Ham United stopper Joe Hart but, on this occasion, it's Fraser Forster coming under fire.

The 29-year-old has joined his Three Lions colleague in facing increasing scrutiny in recent weeks with several high-profile errors culminating in a weak attempt to keep out Glenn Murray's header for Brighton & Hove Albion in Southampton‘s 1-1 draw at the Amex Stadium on Sunday.

It was not the first time Forster had been left wanting this season either. In total there have been five high-profile errors already, costing the Saints five points in the Premier League.

Forster was at fault for Javier Hernández's first goal in the dramatic 3-2 win over West Ham in August but was bailed out by Charlie Austin's penalty after the Hammers had, briefly, come from two down. That was it for more than a month but in recent weeks the former Celtic stopper has been well below-par.

He was also to blame for Manchester United nicked a 1-0 win, palming the Belgian's header back into his path to bundle home.

Three weeks later he was left wanting on both Newcastle goals in a 2-2 draw with his old side; reacting in slow-motion as Isaac Hayden drilled home from the edge of the box before parrying Ayoze Pérez's effort back to the Spaniard to rattle home from a seemingly impossible angle.

And then there was Sunday's worryingly slow reaction to Murray's header in the sort of South Coast derby between Brighton and Southampton.

Despite those errors, Forster actually comes out well in terms of his save percentage. He has always been a good shot stopper and keeping out 75 per cent of the 40 shots he's faced this seasons suggests there is little reason for concern. In fact, only 35 per cent of the efforts faced have come from outside the penalty area.

Interestingly, Forster's save percentage for the whole of last season was just 63 per cent as he struggled to recapture his best form following injury. As things stand, he is stopping a far greater percentage of shots, so it could be argued his form has actually improved. It is too early to draw a definitive conclusion, however, with just ten games played.

For context, England rival Hart has faced six more shots (46) this term but saved just 58 per cent. That is the lowest percentage for any keeper to have faced 40 or more shots this season.

In fact, as the table below highlights, only two keepers facing 40 or more shots this season boast better save percentages. They are Burnley stopper Nick Pope, who plays in a side who encourage shots from distance, and Łukasz Fabiański who has shone again in a struggling Swansea City team. 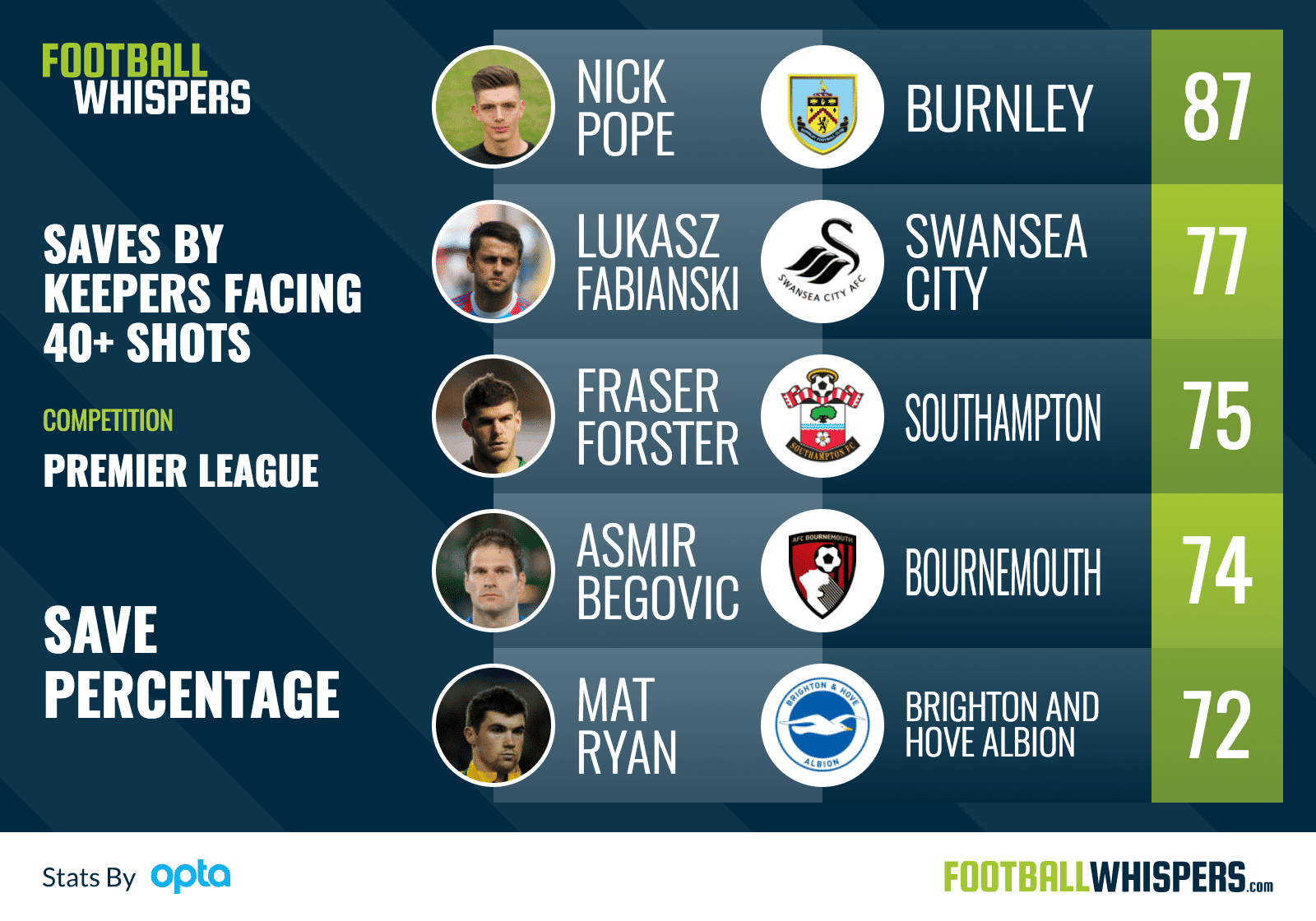 But, like Hart, Forster's errors are too frequent to be dismissed as one-offs. While he mostly does his job well, he has cost Mauricio Pellegrino's side five points this term. That is the difference between being tenth and sixth, which would change how the Saints' season was viewed.

Pellegrino defended his keeper after the Albion game, saying: “It was a little bit unlucky because the ball I think deflected off of Cedric’s head and surprised a little bit our goalkeeper.

But internally the Argentine will be weighing up his options. The dilemma is whether taking Forster out the firing line for a while will do him more harm than good.

A nervous goalkeeper has a negative effect on those in front of him. A back four of Cedric, subject of Chelsea transfer rumours over the summer, long-term Liverpool transfer target Virgil van Dijk, Maya Yoshida and Ryan Bertrand is one of the better defensive units outside the top six so it is not for a lack of protection that these errors are occurring.

But if the man behind them does not inspire confidence they will try to over correct and that will, inevitably, lead to further complications.

The flip side, though, is that dropping Forster will do potentially irreparable damage to his confidence which – presumably – has already taken a bit of a battering in recent weeks.

But the fact his save percentage remains high suggests he is still a reliable No.1 and the errors he is making are just that, and not the sign of a poor keeper.