Newcastle United travel to the south coast for Sunday’s clash with Southampton in good spirits.

After a turbulent summer when there were questions over Rafa Bentiez’s future and their ability to strengthen in the transfer market, the team have recovered and are doing their talking on the pitch.

The away side have won three of their last five games and key to that has been the play of Spanish midfielder Mikel Merino.

Southampton, under new boss Mauricio Pellegrino, cut a frustrated shadow. They are 12th, just two points behind Newcastle, but the have suffered from inconsistencies and in their last six games have won two, lost three and drawn one.

Those victories have come against West Ham United and Crystal Palace, both sides below the Saints in the table.

If the Argentine coach is to guide his team to a home victory, they will need to win the midfield battle.

On one side you have Jonjo Shelvey starting to create a partnership with Merino, one which promises a lot of balance and creativity.

In the red corner you have Mario Lemina and Oriol Romeu, a duo with industry, steal, and a little sprinkle of unpredictability.

Looking at the statistics, it’s the Saints partnership who take the edge. 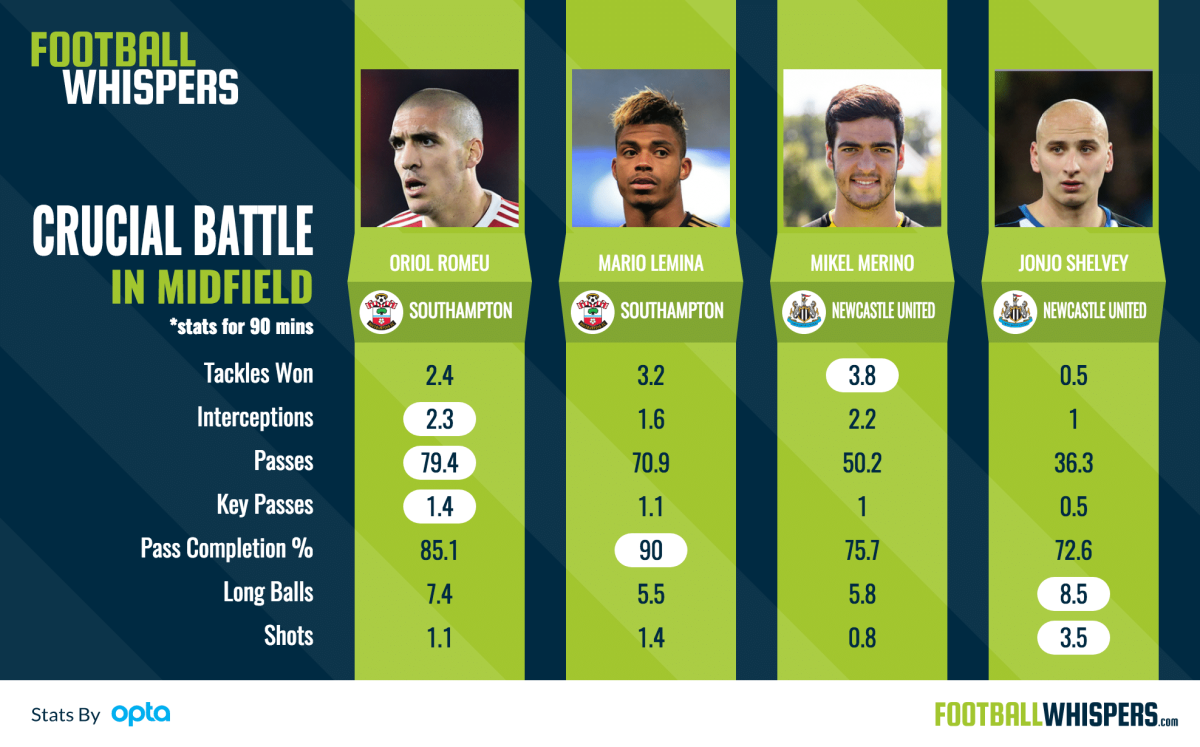 No one matches Romeu in terms of interceptions, passes made and key passes per 90 minutes.

It suggests that Southampton will see more of the ball in the middle of the park, with both players making over 70 passes, combined the Newcastle pair average 86.5.

However, with pace down the wings and a forward line that can thrive off balls in behind, it may suit the away side to play on the break and rely on the talents of their midfield.

In Merino, Benitez will let the Spaniard be his anchor, making 3.8 tackles per 90, but he may struggle unless Shelvey ups his numbers from this term.

What the former Swansea man offers is a threat from deep, both in passing. No one else matches his 8.5 long ball attempts, four of them finding their target. He also provides a scoring threat.

Although he has only played 181 minutes, he return of 3.5 shot per 90 needs to be respected and could cause issues if the Saints duo don’t close him down.

Each of the four have their own merits and areas of dominance and you have to think whichever duo win their respective battle this weekend will give their side a platform to win all three points and climb up the table.