South Africa and Guinea will lock horns in an international friendly match scheduled for Wednesday 25th March 2022. This post has the important details about this game. We also feature the best analysis, preview and free predictions for the African national teams clash. Read on for insights.

On Football Whispers, you get the best free predictions for international friendlies. We preview the clash between South Africa and Guinea in this post to give you deeper insights into the second ever encounter between these national teams. Here are our best picks and betting tips for this match.

South Africa lost to Guinea in the previous and the only encounter that ever took place between these teams. The 1-0 home defeat happened way back in 2008. The second encounter also happens to be in South Africa, at a time when teams are also participating in the WCQ playoffs. South Africa look to avenge the defeat over a decade ago and it comes at a time when the hosts have had an incredible run of form compared to Guinea. We are backing home victory in this clash.

No goals on both ends

We are ruling out the possibility of both teams scoring in this clash. The previous meeting had only one goal. And looking at the latest stats for both teams ahead of this clash, the hosts kept 10 clean sheets in the last 12 games, an indication of a team that is prepared defensively. The visitors have five clean sheets in as many previous games, albeit, with defensively challenges that cost them four games within that run. South Africa lost only once in their last 12 games.

Here are the latest stats for South Africa vs Guinea as well as the latest team stats for to help you make an informed betting decision on this friendly fixture.

South Africa hosts Guinea for the second time. The second meeting will also be a friendly fixture. Losing the first meeting 1-0 at home didn’t sit well with South African fans that are not looking forward to revenge against Guineans.

After a good run of form that has seen the hosts lose only once in the last ten games, during which they recorded 8 clean sheets, this is the opportunity for South Africa to shine in front of home fans. The visiting team has had a mixture of results heading into this clash.

Guinea makes this trip to South Africa after back to back defeats. They didn’t impress in the World Cup qualifiers after finishing third in group I with four points. It is a sharp contrast to South Africa’s performance in the WCQ where the hosts emerged second in Group G with 13 points. Moreover, the latest FIFA rankings also put South ahead of Guinea at position 68. Guinea is currently ranked 81st, albeit, a position that puts the visitors on Africa’s best national teams watch list. 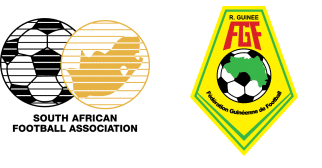 Who are the hosts in this friendly clash?

South Africa will be the hosts.

At what time will the game start?

How many times have these teams met previously?

There has only been one encounter between South Africa and Guinea ahead of this game.