Looking for reinforcements in the January transfer window, both Everton and West Ham United, playing under new coaches, will be prepared to spend big.

So it won't come as a surprise that the Daily Mail have linked both the Hammers and the Merseyside club with a €23million move for Lille defender Adama Soumaoro.

When it comes to spending power, the majority of other European divisions can’t keep up with the Premier League. Ligue 1 has Paris Saint-Germain, but the rest, as Monaco proved this summer, are at the mercy of a large bid from a European giant.

In France, the DNCG control clubs finances. Monitoring what each team can afford to spend on fees and wages. Funds must be proved and if teams fail, it can lead to transfers being suspended and even relegation down through the pyramid.

Despite being bought by businessman Gerard Lopez last January, things have gone rather sour at Lille. Banned from making any winter moves, LOSC were told to find €25million or face stronger consequences.

In simplistic terms, Les Dogues are there for the taking. Sitting 18th after 18 games, the northern club have finally agreed terms to cancel Marcelo Bielsa’s contract.

The famed coach was supposed to introduce a new era to the club, now those plans are in tatters and it could lead to wholesale changes.

Who is Adama Soumaoro?

Born in Fontenay-aux-Roses, just south of the French capital, Soumaoro started his career at Boulogne-Billancourt.

They are a club famed for bringing through young talent and Soumaoro cites their belief of playing him against older, more experienced players as a reason for his development.

He would join the Lille training centre in 2008, but at 15 years old, he struggled to settle in a new region, with a new routine and new expectations from a professional club.

Five years later he made his debut in the Coupe de la Ligue against Auxerre, but he was nothing more than a bit part player. It wasn’t until Hervé Renard was in charge that Soumaoro really found his place in the side.

Switching between a back four and a three-man defence, he would play either as a right-back or centre-back, something which was important to his progression.

“It’s true, being on the flank changes me, because you have to track more runs, but if the coach puts me in this position, it is because he thinks I am up to the challenge,” revealed the defender early in his career.

“My desire is above all to put myself at the service of the team, and work every day to improve.”

When Renard was sacked and Frederic Antonetti took over, Soumaoro remained an important factor and helped the club reach the final of the Coupe de la Ligue. Although beaten by PSG in the final, it was enough to cement his place as one of Lille’s strongest centre-backs.

His time playing as a right-back has kept him mobile, but it’s when he combines his size and strength that he becomes a great defender.

When the back-line is breached, he reacts well to get his body or a leg in the way and while Lille lost to PSG earlier in the season, they were massively helped by Soumaoro’s return.

In the graphic below, you can see he has come out to the right, helping his full-back. Javier Pastore is wise to his movement and drifts into the space.

Soumaoro reacts and not only does he get back goal side, but he muscles the Argentine attacker off the ball and clears the danger. 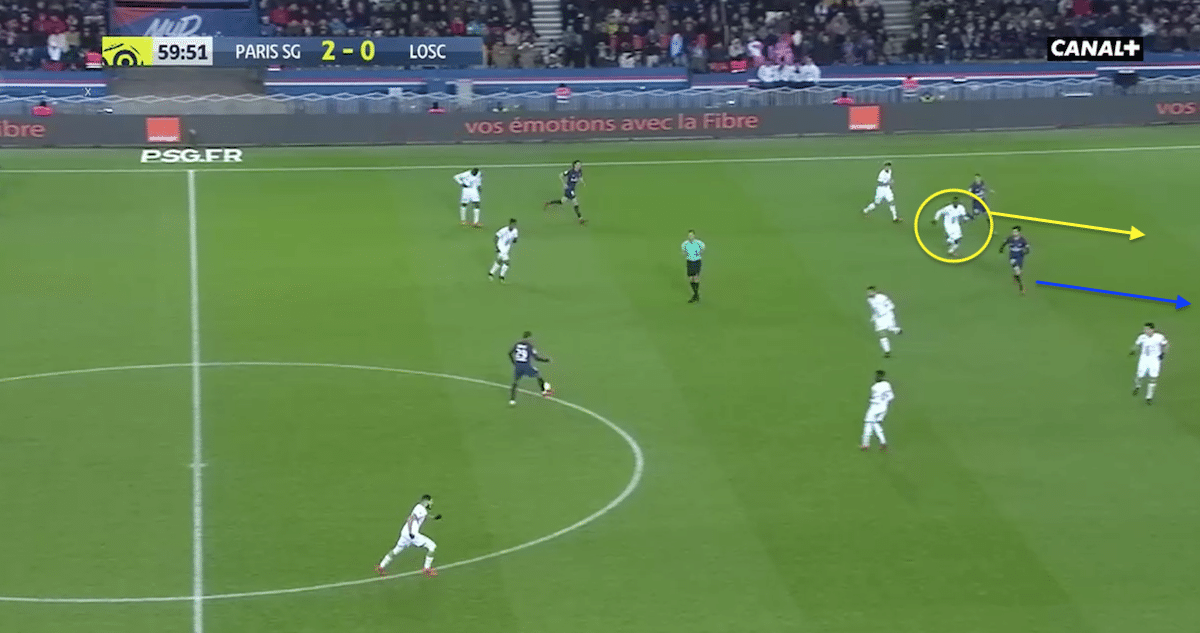 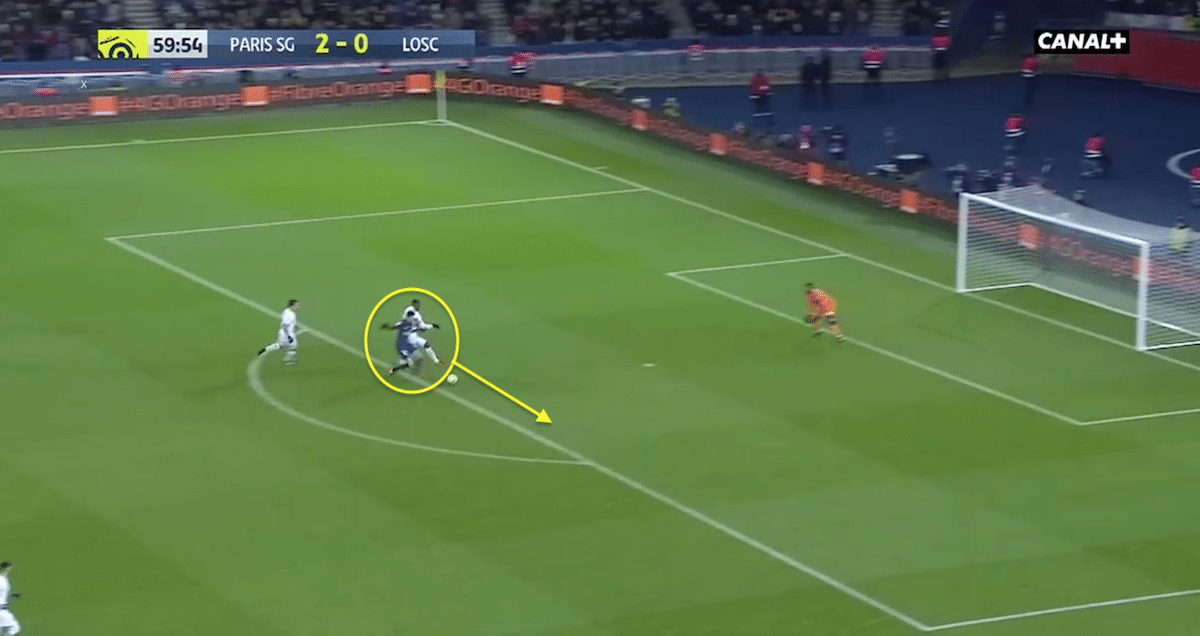 He is everything Lille have lacked this season – he has a never-give-up attitude which was demonstrated best in the win over Lyon.

With his side 2-1 up with six minutes to go, the 25-year-old was down on the goal-line, but he still did enough to knock the ball away moments before Nabil Fekir was about to pounce to equalise.

If a manager plays him as a centre-back, there is little in the way of a downside. He is good in the air, strong, has good pace along the ground and with over 90 per cent of his passes hitting their target, he’s calm in possession.

When played wider, there is a sense, especially going forward, of him being poor in the final third. His crossing leaves a lot to be desired. He is excellent playing a long ball forward but is weak when delivering from positions.

Standing six-foot-tall and around 14-and-a-half stone, he looks a bigger physical presence than his frame suggests.

But at times he can be a little too anxious, clambering into the back of a forward, or charging in too eagerly, causing a foul. He has continued to grow and develop in this sense and the pressures of playing in the Premier League could take his game to another level. 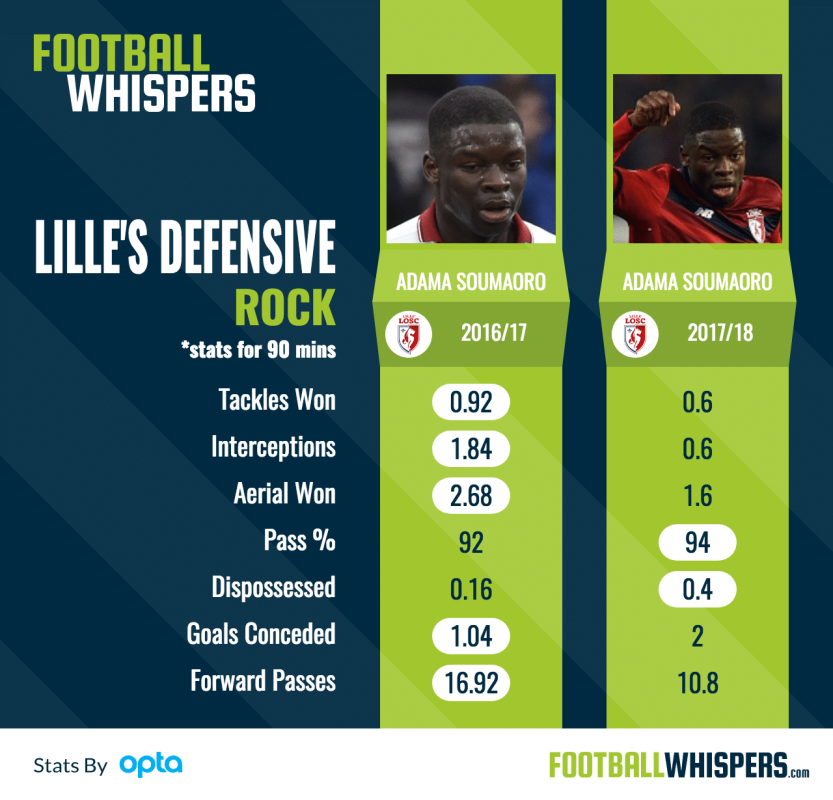 How much would Soumaoro cost?

Lille need an exact amount to satisfy the DNCG and keep the wolves from the door.

In an ideal world, Lille wouldn’t entertain bids for the defender that they've been without for most of the season.

After recovering from ruptured Achilles tendon, he made his return in the 3-0 defeat away at Montpellier and it says a lot that he was exempt of any blame when the squad has given a dressing down by the management.

Soumaoro has gone on to play five games this term, with Lille winning twice, including the 2-1 away victory over Lyon.

In contract until 2021 and a rock at the heart of a defence who truly need him, LOSC would ideally want more than €25million from a Premier League side, but desperate times call for desperate measures and they're likely to sell at the right price.