It's being described as a heavyweight battle. The top two goalscorers in the Premier League go head to head on Sunday afternoon as Liverpool play host to Tottenham Hotspur at Anfield. The Reds may have a two point advantage over Spurs heading into the game but it's Harry Kane who leads the way at the top of the goals scored table, two clear of Mohamed Salah.

In the eyes of many, the game on Sunday will be a straight shoot-out between the two in-form attackers. As basic as it sounds, the player to score the most goals in the match will likely be on the winning side. Similar to the first match between the two sides in October. Kane netted twice in a 4-1 win for the home side with Salah grabbing what turned out to be nothing more than a consolation goal.

For the most part this is true.

Kane has been in sensational form this year and has already been involved in 34 goals in all competitions. He's averaging 0.95 goals per 90 minutes in the Premier League and he's been responsible for 42 per cent of the goals Mauricio Pochettino's men have scored.

Salah's debut season on Merseyside has been record breaking. Like Kane, he's averaged 0.95 goals per 90 minutes and, barring a dramatic loss of form or a season ending injury, he's on target to become the first Liverpool player to score 20 league goals since the 2013/14 season. He's had a hand in 44 per cent of Liverpool's goals in the league thanks to the five assists he's added to his 19 goals.

However, neither side are a one-man team. It may be implied by those in the media and Pep Guardiola may have called Spurs the ‘Harry Kane team' but the supporting cast are just as important as those in a starring role.

Last season it was clear that Dele Alli was the deputy to Kane. The former MK Dons midfielder finished the 2016/17 campaign with 18 goals in 37 appearances. While at Anfield it was a toss-up between it being Sadio Mané or Philippe Coutinho. It really did depend on who you viewed as being the man.

It's been different this time around.

Alli is now more of a creator and has failed to replicate his goalscoring form. Heung-Min Son picked up the slack and has become a key part of Pochettino's team. To date he's got 11 goals and four assists this term. He's been involved in 12 goals in his last 14 appearances.

On Merseyside it's been all change. Mané has been off the boil this season despite posting better numbers than he did last season in terms of goal involvement. And Coutinho, well he got his dream move to Barcelona during the winter window. Roberto Firmino has stepped up and there's even an argument to be made to suggest he's more important to the Liverpool system than Salah is.

Jürgen Klopp put his trust in his No.9 and he's delivered. In terms of strikers in the Premier League, only Harry Kane has been involved in more goals this season.

It's these two players who could turn out to be the match winners on Sunday. The difference makers with others concentrating on Kane and Salah. 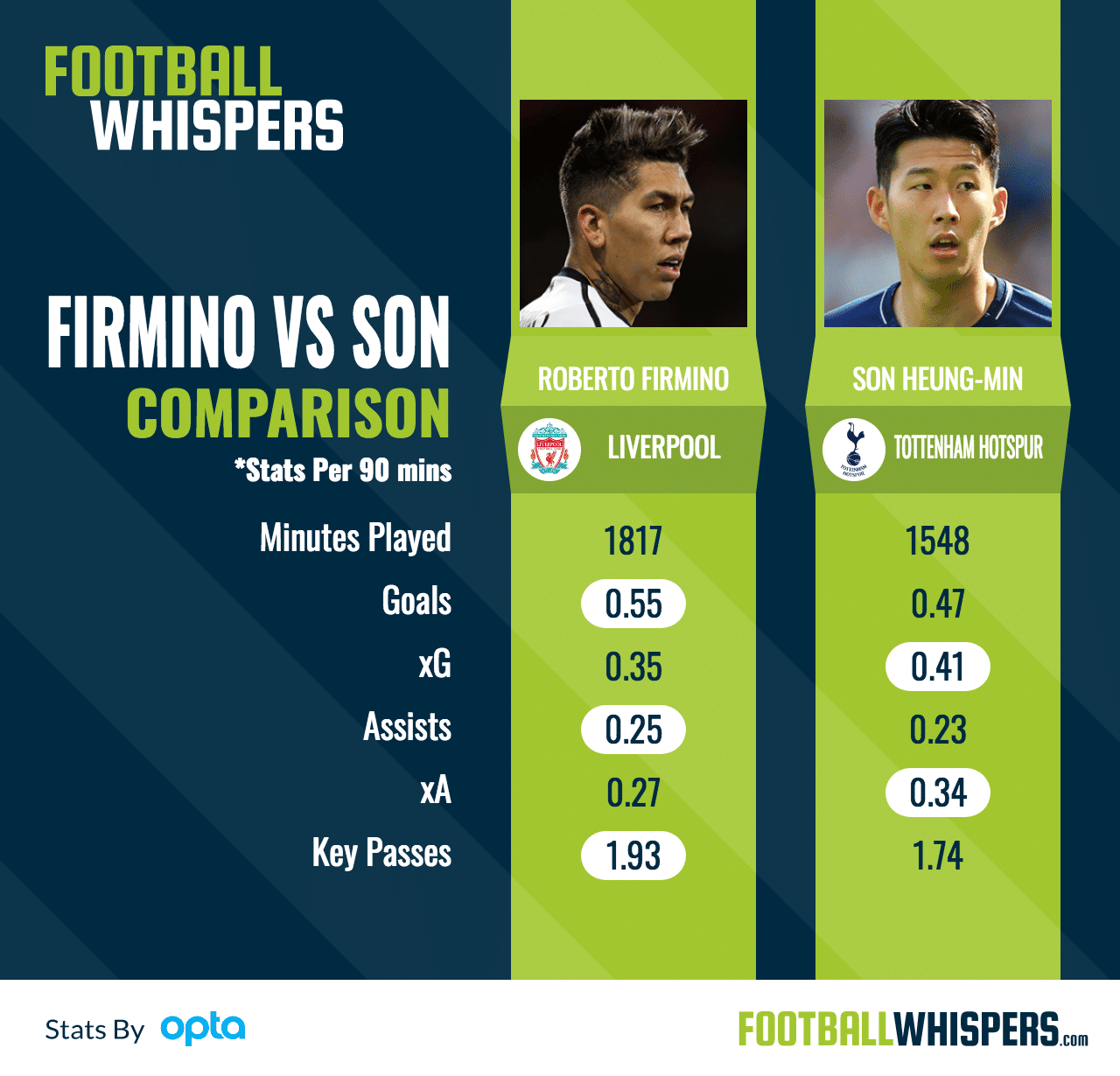 The graphic above shows a number of interesting stats. Though the two players shouldn't be directly compared due to the fact they play different positions, it does help paint a picture of how their overall contributions are key to their respective teams.

In terms of underlying stats, it's Son who really catches the eye. His xG+xA90 comes in at 0.75, 0.13 greater than Firmino's. It shows the Spurs man, a wide forward by trade, not only finds himself in high quality scoring positions, he creates them as well.

His xG90 is higher than the likes of Eden Hazard, Richarlison and Firmino while it's level with Mané and Jamie Vardy. Granted, not all play the same position, it helps you fully appreciate just how dangerous the Spurs No.7 is.

Firmino is outperforming his xG90 though, showing he's a scorer of low quality chances on a regular basis. For context, his xG has him down to score one goal every three games but he's actually scoring a goal every other game. It might not seem like a lot but over the entirety of the season it's a nine goal difference.

The former Hoffenheim man has been involved in five goals in his last four matches and 11 in his last 10. It's going under the radar because of Salah's form but it shows he's just as dangerous as the Egyptian and it's why Spurs would be foolish to concentrate all of their efforts on the ex-Roma winger.

Both Firmino and Son are creators, both are goal threats and both have the ability to dictate who picks up all three points. Kane vs Salah will no doubt take centre stage but the undercard might be the one to steal the show on Sunday.